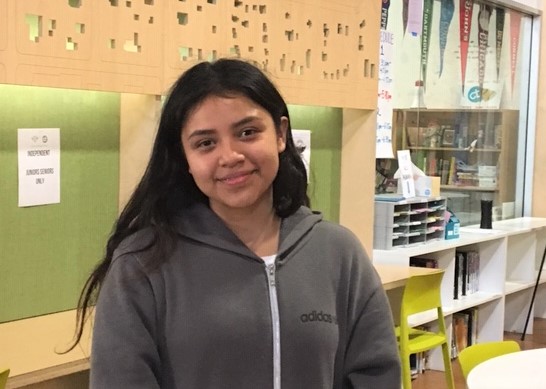 Yet students in access program insist they will attend college.

For Lupe Nieto and other high school seniors in Los Angeles’ Boyle Heights neighborhood, this already is an emotional time of year. College acceptance and rejection letters are rolling in and these low-income students soon must decide whether financial aid offers are large enough to attend their dream schools.

As if that’s not enough to ponder, a national scandal about college admissions now has added another layer of uncertainty and worry for these young people, many of whom are immigrants or children of immigrants.

Nieto, for example, has been accepted at several of the 23 campuses in the California State University system, rejected from two of the 10 University of California campuses and placed on UC Riverside’s waiting list. The daughter of a factory worker and a street vendor, she will be the first in her family to attend college and wants to major in business administration. Now the Theodore Roosevelt High School student fears that any rejection “is not just because somebody else had a better academic portfolio or wrote better essays. Maybe they bought their way in or cheated their way in.”

Fellow Roosevelt High student Eduardo Gomez has similar misgivings. The scandal involving bribery to admit students from wealthy families to some universities “opened my mind about how the world really is about money and about how money controls everything.”

Gomez wants his parents — his father a construction worker and his mother an airport luggage assistant — to be proud of him. He plans to study political science at UC Santa Barbara or UCLA (he was accepted at both), participate in the ROTC and become an Army officer with a bachelor’s degree. Being a military leader will allow him to “motivate young people to be a better self, whoever they are and wherever they come from,” he said.

Nieto and Gomez are among the 240 high school students — including 43 current seniors — who belong to the Boyle Heights chapter of College Track. The non-profit helps low-income, first-generation students like them in California and across the country to apply to, enroll and succeed in college.

Across the country, a network of college access and success programs, including College Track, developed over the last 20 years to provide low-income students the preparation that middle- and upper-income families can afford or regularly receive at their high schools. Admittedly, the programs can never fully match the advantages of having college-educated parents who can legally help their children with applications, let alone those who allegedly offered bribes for admission.

Nieto and Gomez recently attended a meeting about college admissions at the Boyle Heights center and, in interviews there, they and others questioned the fairness of the college application process. Their fears were in reaction to the federal probe that has charged dozens of coaches, admissions counselors, wealthy parents and Hollywood celebrities in a scheme to get students admitted to prestigious universities, including Yale, UCLA and the University of Southern California.

Still, the students insisted that these revelations won’t stop their pursuit of higher education and better opportunities.

Nieto said the agency’s tutoring and counseling have made her “competitive and ready for a college education.” Inspired by her mother’s business ambition, she said she wants to earn a business diploma that will help her start a company to “benefit people and bring something new that people can use.”

Reports about the admission scandal make programs like College Track seem even more important in areas like Boyle Heights, administrators said. The predominately Latino neighborhood just east of downtown Los Angeles, has a low college-attendance rate and some families struggle with immigration status issues. To encourage students to include college in their futures, the center is decorated with college pennants and wooden cut-out maps of college campuses.

At the recent night meeting, high school seniors and their parents gathered to learn more about next steps, such as choosing among the schools that said yes and comparing grants and loans. Parents of older students already in college spoke of the challenges of letting go, with tips about sending care packages of baked goods. College Track counselors outlined upcoming reviews of financial aid packages.

Tina Kim, site director of the Boyle Heights location, said that the program emphasizes that “your hard work will get you somewhere.” So it was “definitely demoralizing” to hear about wealthy parents paying off athletic coaches and exam proctors.

Yet the scandal, she said, also highlights the need for programs like hers. So many students have “this untapped potential” but never attend college because of poverty or inadequate help from high school counselors. Without support from teachers, school counselors and college success groups like this, more students “would be even more in the dark about how to navigate the system the right way.”

While the news of the alleged bribes is upsetting, Saskia Pallais, College Track’s regional executive director in Los Angeles, said she does not worry that any of her students feel so discouraged that they will give up. “I think the reality is our students already know the playing field isn’t even for them. They have to work extra hard to get a foot in the door and they are committed to that,” she said.

Counselors and access organizations should use the scandal to press an important emotional point with low-income and first-generation students accepted to colleges, according to Audrey Dow, senior vice president of the Campaign for College Opportunity, an advocacy and policy group based in Los Angeles. “They belong in college and deserve to be there. There is no reason to think that they are other than amply qualified to do the work and fit it.” she said. “The colleges need them, need their perspectives, need their talents and the state needs their talents.”

Briza Sanchez, a College Track participant who attends a math and science magnet school on the Roosevelt High campus, has been accepted at several CSU campuses, one UC and is awaiting decisions from some others. The daughter of a truck driver and a school aide, she said she was at first shocked, then angry to learn about how rich families manipulated the admissions system.

“I got kind of mad that they were giving that opportunity to rich people and not giving the opportunity to low-income students who want to better themselves,” said Sanchez, who wants to study biology and later attend medical school. Affluent students “haven’t struggled the way we have. It’s much more difficult for us to keep pushing and seeing hope at the end of the day,” she added.

Her older sister started but did not finish community college. But Sanchez is determined to graduate from college: “I’m not going to give up easily. I know I want to become a surgeon. I know college will be much more work but I’m willing to go through it.”

That attitude pleases her father, Oscar Sanchez, who, with his wife Vreni, attended the parents’ meeting. Speaking with the help of a translator, he said he feared that a corrupt college system might hurt students who are trying to get into college “on their own merit and hard work like Briza.” He hopes the controversy will lead to reforms that reduce the corruption. “It won’t stop it completely but less of this is going to happen now,” he said.