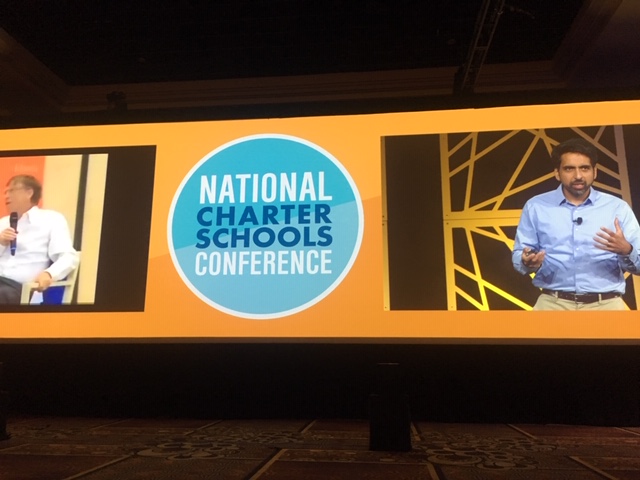 In the face of the slowing growth of charter schools, and pushback in a growing number of state legislatures, the charter movement is engaged “in a battle for survival,” the head of the largest organization representing charter schools around the nation says.

Nina Rees, president of the National Alliance for Public Charter Schools, speaking at her organization’s annual conference in Las Vegas, said the charter school movement is “at a crossroads,” and made a passionate plea for parents and others to get more involved in countering the growing resistance to charter schools by teachers unions and some state Legislatures.

“We are going to lose this fight if we can’t get our families engaged in defending their own schools,” she said.

The theme of the conference was “Charter Schools: Reimagining Education.”

Over 5,000 charter school representatives and advocates showed up for the event, the largest attendance ever, said Rees, and a sign of the movement’s inherent strength.

But Rees told her members in the opening speech that “we cannot re-imagine anything if we’re not ready to fight for our schools.”

That will require greater grassroots activism, she said, especially at the state and local level.

California was held up as a prime example of the challenge facing the charter school movement, and a principal battleground.

Referring to recent battles in the Legislature, she said, “in California, they would have placed a moratorium on new charter schools, and made it easier to shut down existing charter schools even when they are serving students well.”

Over the past five years, the number of new charter schools opening nationally has steadily declined — from their 2013 peak of 642 to 309 in 2017.

This comes at a time when President Trump and his Secretary of Education Betsy DeVos have made expansion of “school choice,” which includes charter schools, their top education priority.  It also coincides with a rise in teacher activism, in both “blue” and “red” states. In several instances — and notably in teacher strikes in Oakland and Los Angeles — charter schools have been singled out as a major cause of their district’s financial woes and inability to serve their students adequately,

Rees says the charter movement  can no longer rely predominantly on “data and lobbyists,” despite their effectivenesss, as it has done in the past.

“If you’ve watched the reaction to the teacher strikes on television over the past two years, you know that it’s not lobbyists and academics and studies that get attention. It’s educators; it’s students; it’s families. The world needs to hear the voices of our students, our families, and our teachers.”

Now, she said, “the need for innovation is also important in suburban communities and in rural communities and our political survival right now hinges on growing our movement into these communities. We need to be a presence in more neighborhoods, more towns, and more congressional districts.”

In an interview, Rees said that because of California’s leadership in the charter school movement “a slow down in growth in California will have an impact throughout the country.”

At the same time, she said, California is arguably better positioned to fight back against efforts to restrict charter growth because you have people who have been doing this for a long time. You have families you have alumni; you have a lot of funders who live in California.”

California, she said, could be “an interesting test case as to whether our movement actually can win under the current political climate.”

A common theme throughout the conference was repeated attacks against teachers unions — who charter advocates insist are more interested in maintaining or growing membership than in children themselves.

The California Teachers Association is no exception, she said.  “The CTA  can throw all these arguments against charter schools. At the end of the day, all they want is to be able to have more members in their  unions. So all these discussions, about charters draining money from other districts and so forth, would go away if the CTA could have more members.”

Claudia Briggs, a CTA spokesperson, said that in fact the teachers union has been able to sign up about 1700 charter school teachers as members as a result of organizing efforts in recent years, and 600 in the last year alone.

“The industry is afraid of transparency, accountability and local control because they’ve been getting away with fraud, waste and abuse for quite some time now,” she said, echoing the major themes of the CTA’s “Kids Not Profits” campaign. “More than $740 million have been taken from neighborhood public schools and diverted to privately-managed charter schools whom have had zero transparency and accountability in their dealings with taxpayer dollars.”

Myrna Castrejón, president of the California Charter Schools Association, described California as “ground zero” in the charter wars, especially in fighting what she described as the “sustained and pernicious” teachers’ union campaign.

“Folks often wonder whether we plead Chicken Little too often,” she said.  “No, this is real.”  Efforts in the Legislature to put limits on charter renewals and other restrictions. she said, are “literally threatening the very future of charter schools.”

Now many charter advocates are looking anxiously not only at state legislatures like California but also to the presidential campaign, and whether charter schools will come under attack from Democratic candidates, following Sen. Bernie Sanders call in May for a moratorium on federal funding for existing charter schools, and a ban on public funding of any kind for new charter schools.

On Tuesday, Rees’ organization released an open letter to Sanders signed by 244 “leaders of color” asking Sanders to retract his call for a charter school moratorium.

The letter underscored the intensity of the battle  — one that is only likely to intensify during the coming months.

Updated on July 2 at 10:30 p.m.: This story was updated to reflect clarify the number of charter school teachers who are CTA members.