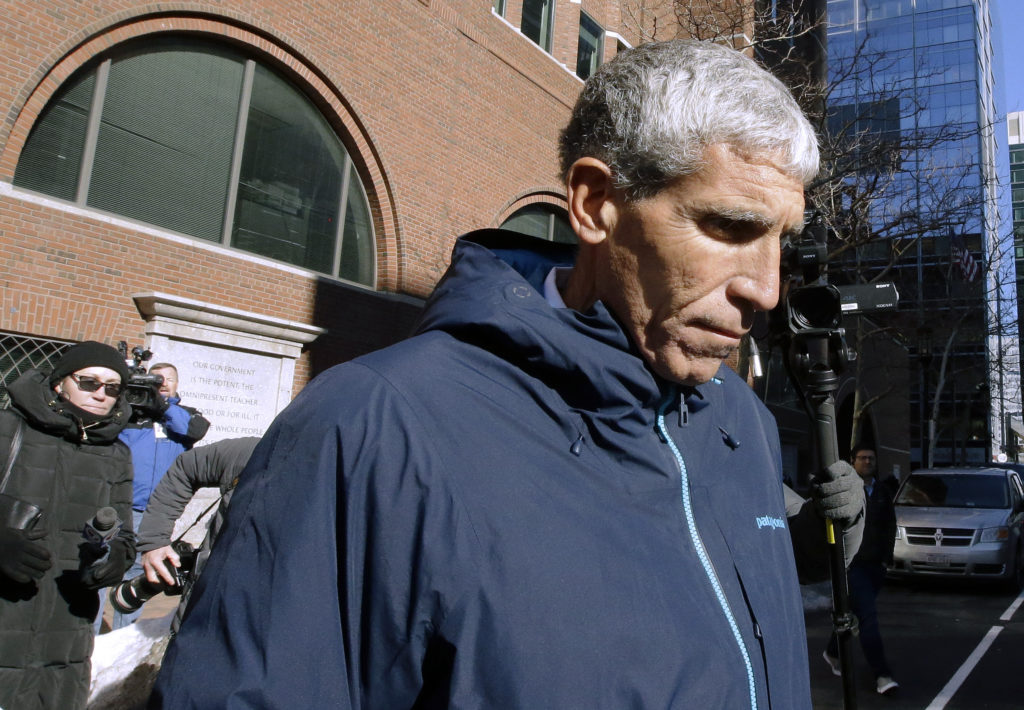 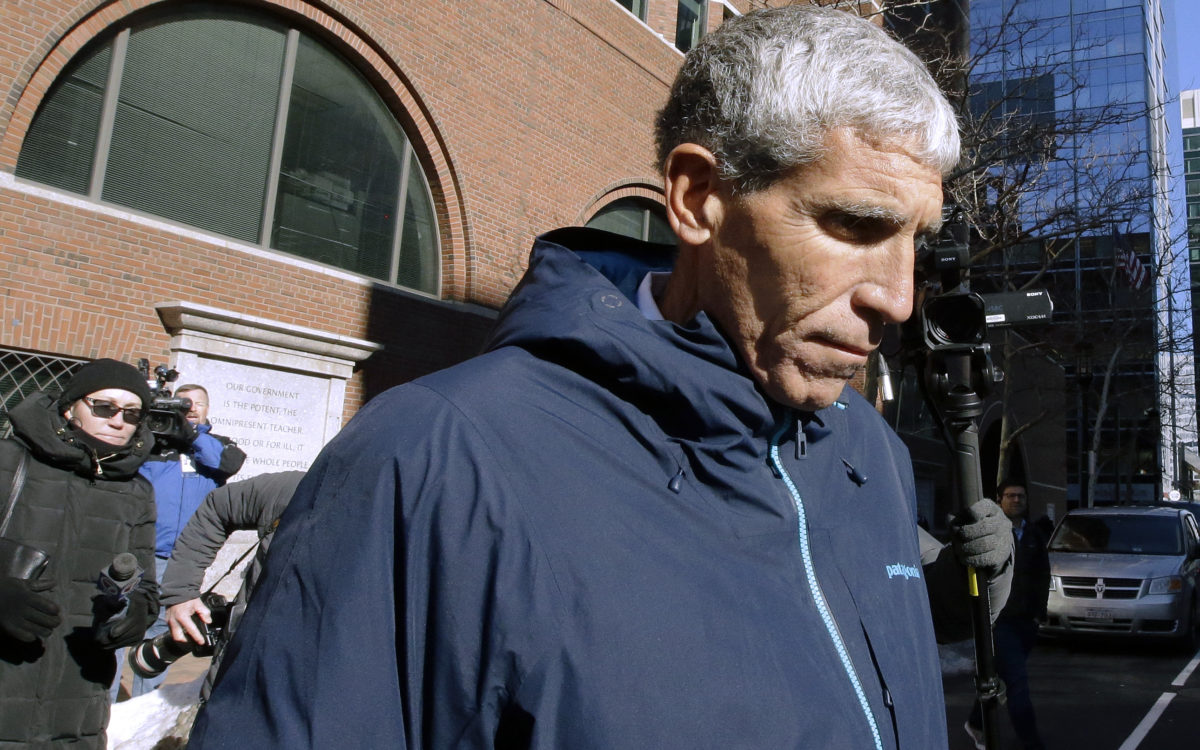 Following the exposure of an elaborate fraud to bypass admissions standards at some of the nation’s most elite colleges, leaders of youth-serving organizations in California and elsewhere said the mastermind of the operation falsely claimed to be partnering with their organizations to help low-income children go to college.

Thais Rezende, the CEO of Bizworld.org, a Bay Area-based organization that teaches entrepreneurial skills to schoolchildren, was among several who say they had no contact with William “Rick” Singer, a Newport Beach-based college admissions consultant.

“We don’t know Mr. Singer or his foundation and have not been in partnership with him at all whatsoever,” Rezende said in an interview with EdSource Wednesday.

Singer has pled guilty to racketeering and other charges brought by federal prosecutors after a sweeping investigation that uncovered large bribes paid by wealthy parents to get their children into highly selective colleges like Yale, Stanford, the University of Southern California and UCLA.

Singer allegedly used his consulting firm The Edge College & Career Network, which was known as The Key, to pay bribes to athletic coaches and other university officials who would secure admission slots for the students, according to the federal indictment. In addition, Singer set up a scheme on behalf of some of the parents to cheat on the SAT and ACT college entrance exams. In some cases, the children were aware of the cheating and in others they weren’t, the indictment said.

All told, prosecutors allege that Singer paid approximately $25 million in bribes on behalf of parents from 2011 through February of this year. Much of the money was funneled through a nonprofit organization, called Key Worldwide Foundation, so parents could disguise the bribes — some of which were over $1 million — as charitable donations, the indictment said.

The foundation’s revenue grew from just over $450,000 in 2013 to over $3.7 million in 2016, according to documents that it is required to file with the IRS. Singer did not answer a call from an EdSource reporter, nor did he respond to a text message.

The U.S. Department of Justice investigation involved 200 agents nationwide and resulted in charges against 50 people in six states, 35 of whom are from California. Among those prosecuted were business moguls, financiers and Hollywood actresses Felicity Huffman and Lori Loughlin.

The Key Foundation website said its mission was to “provide guidance, encouragement and opportunity to disadvantaged students around the world.” It went on to claim that since its inception in 2014, it had “touched the lives of hundreds of students that would never have been exposed to what higher education could do for them.”

The website then listed a number of other nonprofits as “partners,” including Bizworld.org and a few others from California. As of late Wednesday evening, the Key Foundation website had been stripped of its content, including any mention of partners. But that was after Rezende spent parts of Tuesday and Wednesday fielding calls from reporters. 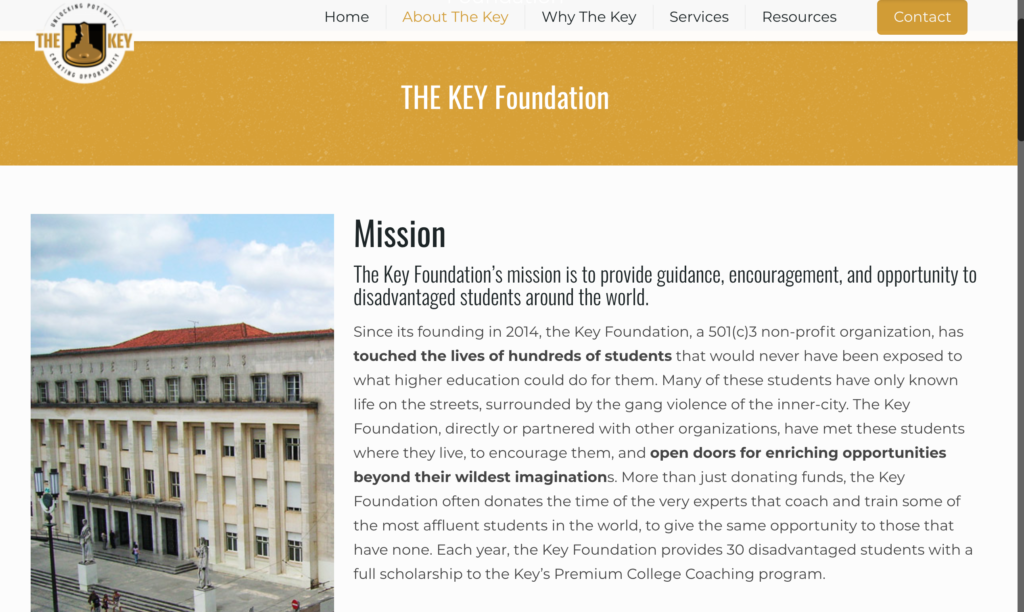 “It is very unfortunate that he decided to pull our organization into his dealings,” Rezende said. “Our legal team contacted Mr. Singer and demanded that our name and logo be taken off his website.”

Founded in 1998 and based in Oakland, Bizworld.org provides project-based lessons geared toward students in elementary and middle school that focus on entrepreneurship, business and financial responsibility. The organization’s materials have been used in classrooms around the world and in other settings like after school programs and summer camps, Rezende said.

She said her records show that in 2006 Singer purchased one of Bizworld.org’s curriculum products, but no one from the organization ever had any direct contact with him, nor do they know what he did with it.

“The logo on his website is our logo, but the description of our program is inaccurate,” Rezende said. “He just made up the connection.”

EdSource examined three years of financial documents The Key Foundation and Bizworld.org filed with the IRS, as required by law, and found no donations or other payments made by either organization to the other nor any other indication that a partnership exists.

Another Oakland-based youth program, Oakland Soldiers Basketball, is also listed as a partner on The Key Foundation website. EdSource was not immediately able to reach leaders of that organization for comment. The founder of a Houston-based youth basketball program, also listed as a partner, denied any association with Singer or The Key Foundation, according to the San Francisco Chronicle.

The Key Foundation’s IRS documents show a $10,000 donation in 2017 to another organization that was listed as one of its partners until Wednesday, the Los Angeles-based LadyLike Foundation, which has a mission based in Christianity to “educate, empower and inspire young women living in underprivileged inner city communities,” according to its website.

The LadyLike Foundation appears to hold a number of events throughout the year, including a “Women of Excellence Scholarship Luncheon” and an event on the UCLA campus called “UCLA Day.”

LadyLike’s website and IRS filing both list Leah Pump as the organization’s founder/CEO, but the middle names are different. Pump did not return calls and an email from an EdSource reporter seeking comment.

The Key Foundation’s IRS documents from 2015 and 2016 also include donations totaling $37,750 to a Palo Alto-based organization called Friends of Cambodia. However, the operators of that charity said they have never heard of The Key Foundation and never received any money, according to reporting by NBC Bay Area.