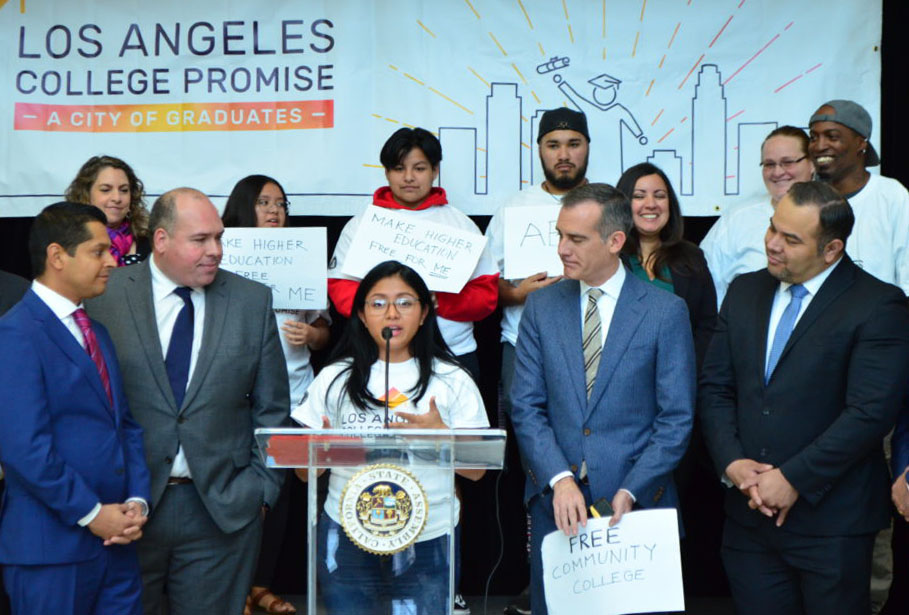 Colleges spend their portion of state funds to cover range of student expenses, not necessarily tuition

After California lawmakers passed a law in 2017 that some of its backers touted as making community college tuition-free, David Loverin heard from a lot of families eager to take advantage of it.

When legislators and the media began focusing on the law, “they started promoting it as free college,” said Loverin, director of financial aid at College of the Sequoias, a community college in Visalia, south of Fresno. “But when you went back to the actual bill, it wasn’t really written that way. So a lot of families are coming to us saying ‘free college, free college’ and we’re like, no, not really.”

That’s because the law, AB 19, known as the California College Promise program, allocated $46 million to the state’s 114 community colleges with the idea of helping students cover some of their costs, not necessarily tuition.

The law in fact was originally written to just provide free tuition to first-time, full-time students who don’t receive the state’s tuition waiver for low-income students. Tuition costs $46 a unit, or $1,380 per year for students taking a full load of 30 units. After lobbying from the community college system and others, the final version morphed to give colleges wide latitude to use funds  provided by the law to help students cover a range of costs: from free tuition for students who don’t qualify as low-income to receive the state’s tuition waiver to free laptops and textbook vouchers.

And it turns out colleges took that latitude and ran with it last year, spending their portion of the state funds in myriad ways.

An EdSource analysis shows that nearly a third of the colleges are using all the funds, or plan to use them, to offer just free tuition for students who don’t qualify or apply for the state’s tuition waiver for low-income students. Roughly a tenth are using the money just to cover non-tuition costs, such as offering food, transportation and textbook vouchers. The majority of the colleges are planning to do both — awarding their students some combination of free tuition and non-tuition aid.

“That was the intent. It was based upon having a little bit of flexibility,” said one of the writers of the law, Assemblyman Kevin McCarty (D-Sacramento) who chairs the Budget Subcommittee on Education Finance.

Responding to EdSource’s review, McCarty said colleges are “adhering to the spirit of what we laid out, which is focus on free community college and also focus on the cost of education for some of these students as well.”

Rhonda Mohr, vice chancellor for student services of California Community Colleges, isn’t surprised most colleges are using the funds for student costs beyond tuition. “I think there’s probably a realization that the state is falling short in covering the non-tuition costs of students,” Mohr said. Colleges “wanted to have the best of both worlds, so some aid for needy students and some aid for non-needy students.”

For its analysis, EdSource recently interviewed officials from dozens of colleges and reviewed documents that all 105 colleges participating in California College Promise submitted to the chancellor’s office of the community college system in fall 2018, which summarized how they’re making use of the program’s funds.

The law joins a suite of other state and local initiatives to help students afford community college that each contain “promise” in the title: The California College Promise Grant, a tuition waiver for low-income students; and dozens of local promise programs that are funded by donors and provide tuition or other aid to some students. That’s in addition to numerous other state financial aid offerings.

There are several reasons why colleges are choosing to fund expenses beyond tuition. Some would rather provide their low-income students with discounted textbooks or transportation allowances instead of covering tuition for students who don’t qualify for the College Promise Grant. Others are buoyed by their local promise programs, allowing the colleges to stretch their aid dollars to cover more services. Many colleges reserve the program for students who attended local high schools.

A handful of colleges said they are hiring staff to improve student academic counseling services or encourage more students to complete federal and state financial aid applications. Others are using a portion of their funding to bolster their marketing efforts about available financial aid for students. Some details for the entire system remain elusive. While several colleges listed how many of their students would benefit from the program, not all did.

Mt. San Antonio College in Los Angeles County is spending all $940,000 of its state College Promise program funds on student services for all new first-time students and none on tuition. “We want to really stay balanced in helping all new students, so we’re casting a broader net,” said Audrey Yamagata-Noji, the college’s vice president of student services. First-time students who complete a summer boot camp can receive a laptop, $500 in book or supply vouchers, $200 to purchase on-campus food, waived mandatory fees, plus academic perks like priority course registration and additional mentoring. The benefits vary depending on whether the students are full-time or not. Yamagata-Noji anticipates more than 1,000 students will benefit from the College Promise program in the coming school year.

Some colleges that are using the funds only on tuition waivers are open to covering other expenses. “We would love to eventually extend the dollars to include non-tuition cost assistance in the future,” said Tiffany Haynes, director of financial aid at Porterville College in Tulare County.

Despite how the colleges are spending the first round of funding, state leaders are continuing to label the prospect of additional funding as “free” college.

First-year Gov. Gavin Newsom, eager to make good on a campaign promise of increasing college affordability, has proposed to add an additional $40 million to the California College Promise. His budget called the investment a way “to support a second year of free tuition for students” even though most colleges aren’t spending their state promise money on free tuition alone. Moreover, even if colleges did just spend that money on free tuition, only 28,000 students would benefit due to the law’s requirements that they be first-time students who are taking at least 12 units a semester. A companion bill in the Legislature, AB 2, would do the same.

McCarty wants to remove that rule that only first-time students benefit. He has heard complaints from colleges that too much staff time is dedicated to checking historical records to confirm students didn’t attend college years ago and are therefore ineligible for the free-tuition perk of the law.

“It makes more sense for all full-time students to go, not just full-time, first-time,” said McCarty, who took an 18-month break after attending community college before returning to attend full-time. Dropping the first-time requirement may add $20 million to Gov. Newsom’s proposal, he added.

California actually spends about $763 million annually to make tuition free for low-income community college students, benefiting about half the system’s 2.1 million students. For both part-time and full-time students, the benefit can be a savings of $46 a unit, meaning a student taking 30 units a year can save $1,380. A true “free tuition” program would likely entail doubling that program so that all community college students, regardless of income, would not have to pay tuition.

“I don’t think we’d have the resources to do it,” McCarty said. “We think this is a good place to start and focus on trying to get more community college students going full time.”

Some college officials say the California College Promise is much more than just financial aid for students. “The free college is catchy and gets them in the door, but it’s the support and the mentoring and the coaching and the counseling that keeps them there and helps them be successful in the end,” said Joanna B. Zimring Towne, faculty coordinator for the college promise program at the Los Angeles Community College District.

In addition to offering all those support services, the district, the largest in the state with roughly a quarter of a million students, is using two-thirds of its $3 million in California College Promise funds this year to give eligible students free tuition. The remainder is being spent on $300 vouchers for eligible students that they can use as bookstore credit, a metro pass or toward meals at campus cafeterias. To receive the benefits, students have to agree to a host of promises, including taking part in the academic services Zimring Towne listed.

Some colleges are entering the free college concept cautiously. Loverin of College of the Sequoias said that the school’s leaders were initially concerned that the state program wouldn’t offer enough money for the college to make a free-tuition promise. Instead, the college decided to reimburse eligible students once they successfully completed a term rather than offering the money up front.

McCarty is mindful of those growing pains, saying that “any new program is a living, breathing entity.” He’s planning a hearing sometime in the spring on how the law is working and possible changes to it.