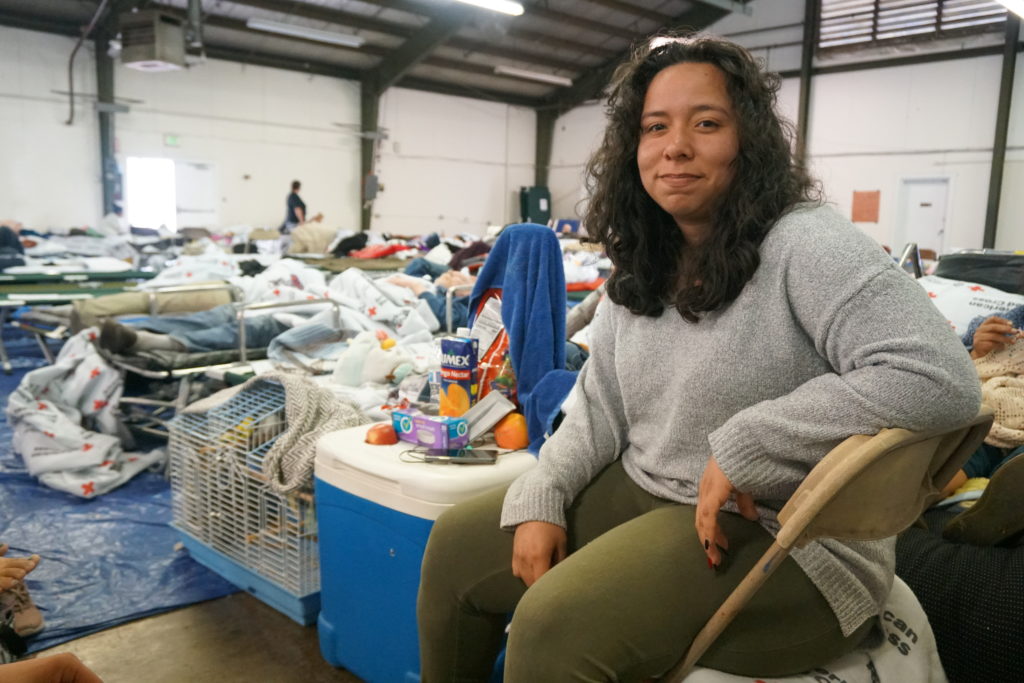 Ashley A. Smith and Sydney Johnson 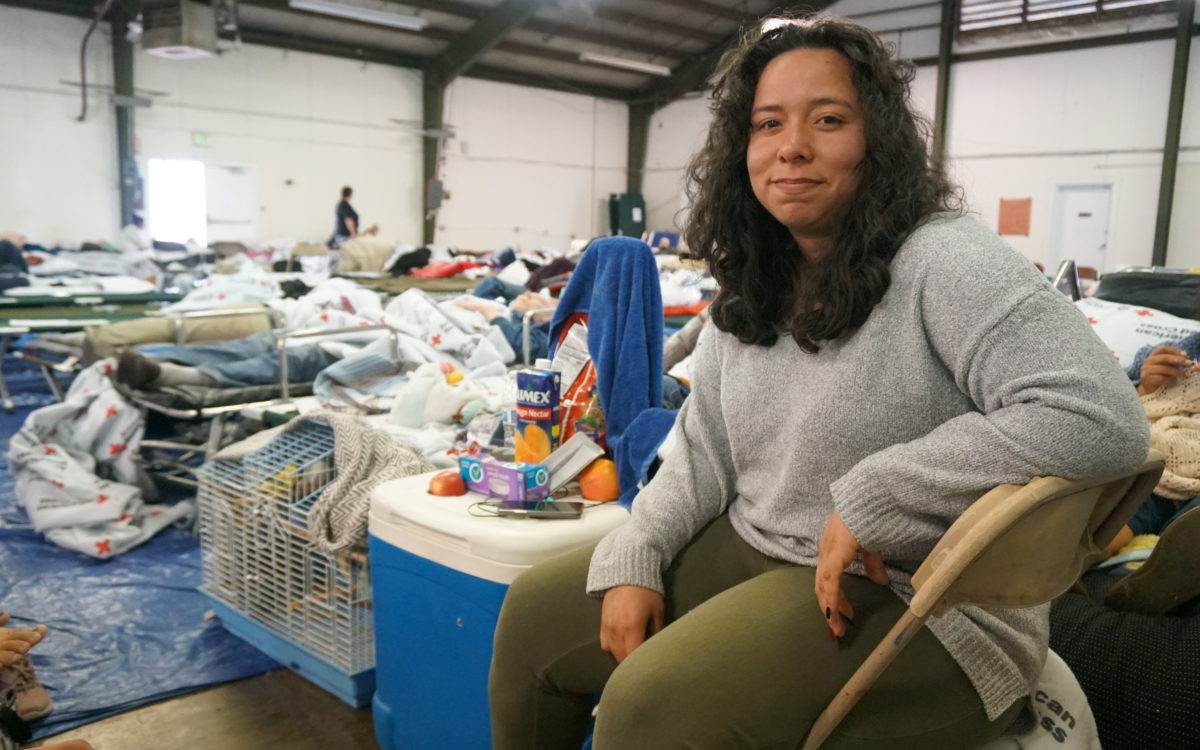 Photo: Sydney Johnson
Bianca Chavarria, a student at Santa Rosa Junior College, was evacuated from her home in Windsor.

Photo: Sydney Johnson
Bianca Chavarria, a student at Santa Rosa Junior College, was evacuated from her home in Windsor.

Ashley A. Smith and Sydney Johnson

Rene Chavarria, a student at Santa Rosa Junior College, was supposed to take two tests this week. Instead, he’s taking shelter with his parents, sisters and grandmother at an evacuation center in Petaluma, about 30 miles south of where the Kincade fire has burned more than 76,000 acres in Sonoma County this week.

But classes weren’t top of mind as he sat with his family and pet birds on Tuesday, three days since their family was displaced from their home in Windsor due to the Kincade fire. “Right now, I’m just thinking of when we will get to go back home,” he said.

Chavarria is one of thousands of students affected by a series of fires that have raged throughout California, and whose school had to close due to smoke, power shutoffs or direct fire danger. About 12 fires are sweeping through both Northern and Southern California, according to The Los Angeles Times. Kincade, the largest of the fires, began Oct. 23 and so far has burned more than 76,800 acres and destroyed 200 structures.

Sonoma State University, located south of the Kincade fire, evacuated the 3,000 students who live on campus and will remain closed until Monday, Nov. 4. The university moved about 30 students and five staff members to a workforce housing facility it owns off-campus. All public schools in Sonoma County also closed this week and many will remain closed through Friday.

“We’re concerned about the wellbeing and mental health of our faculty and students and staff,” said Paul Gullixson, associate vice president of strategic communications at Sonoma State. “For many of our faculty and staff, and some of our students, this is the third year in a row of smoke or fire-related shutdown.”

Across the state, many more schools were forced to close in Marin, Alameda, San Mateo and Contra Costa counties due to power shutoffs. More than 10 school districts near Sacramento closed schools on Monday due to PG&E power shutoffs.

The so-called Easy fire broke out in Simi Valley Wednesday morning, quickly spreading to 1,300 acres and causing all schools in nearly 12 Ventura County districts to shut their doors. CSU Channel Islands also announced it would be closed on Wednesday.

In Los Angeles, the Getty fire also erupted early Monday morning and has burned 656 acres as of Wednesday. UCLA and all schools in the Santa Monica-Malibu School District closed earlier this week, along with 16 Los Angeles Unified campuses and several Los Angeles charter schools. Many reopened Tuesday and Wednesday.

For many students and educators, the experience brings back painful memories of fires in recent years that tore through parts of Northern California, including the 2017 Tubbs Fire near Sonoma and 2018 Camp Fire in Butte County, the most destructive wildfire in California history.

“We had school on Friday and no one had been evacuated yet, but just the smoke in the air was already causing anxiety with the kids,” said Rebekah Rocha, principal at Cesar Chavez Language Academy in Santa Rosa, a TK-6 charter school.

About 80 Sonoma State students and staff lost their homes in the 2017 Tubbs fire.

“That was very stressful and traumatic,” Gullixson said. “This situation triggers memories. We all feel it when we’re smelling the smoke and dealing with power outages.”

Some families at a Petaluma evacuation center said their children, who have been evacuated more than once in the past two years, were exhibiting signs of post-traumatic stress disorder.

“My daughter has a learning disability and two years ago, she had to evacuate, and she has PTSD,” said Elicelda Rivera, 27, of Windsor. Rivera, who is a full-time Empire College student, said she’s not allowing herself to worry about her own education for now, because she has to take care of her daughter’s wellbeing.

Her daughter, Estrella Santiago, 8, and a student at the closed K-8 school Cali Calmecac Learning Academy, has panic attacks in the evacuation center.

“My priority is my daughter,” she said. “I feel bad because Halloween is coming and we celebrate Day of the Dead. She thought she would be dressing up, but none of it is going to happen.”

Pablo Mendel, 14, an 8th-grader at Comstock Middle School in Santa Rosa, said this is his second evacuation in three days.

“I saw black and red sky and got scared. My first time I was crying and didn’t know what to do … I didn’t like being evacuated until I met people from my school here.”

Some parents said they are concerned about air quality and the effect on their children’s health.

Alfonso Landa, of Windsor, said his 8-year-old daughter, Shally, has frequently been coughing. He, his wife and daughter have been sleeping in their car at an evacuation center since Saturday. The family hasn’t used the indoor shelter, which allows pets, because of Shally’s allergies to dogs.

“I’ve lived 25 years in this county and now it’s terrible,” Landa said, referring to the frequency of the fires. “My daughter is asking why is this happening?”

The widespread power shutoffs and lack of internet in some parts of the region have made it difficult to stay connected and up-to-date on information, said Rocha, the Cesar Chavez principal.

Sonoma State is reviving its NomaCares One-Stop Support Center to provide counseling and financial assistance to faculty, staff and students as they transition back to campus next week, Gullixson said. The college will also survey students and faculty to see how they were affected by the evacuations and closure, he said.

Volunteers with the nonprofit Integrative Healers Action Network, which offers free holistic health services for victims of disasters, set up a clinic at the Petaluma evacuation center offering free acupuncture, massages and other care services.

“People aren’t always ready to talk about trauma while they are still in it. Many are in a lot of physical pain from that trauma and from sleeping on cots and in cars,” said Jenny Harrow, co-founder of Integrative Healers Action Network.

Others were already planning for the challenges that await them after the fires are fully contained. Bianca Chavarria, Rene’s sister, is taking anatomy and physiology and other prerequisites at Santa Rosa Junior College in order to enroll in a funeral service degree program at American River College next spring.

Since evacuating, she’s not sure if she will be on track to start that program come January. “This was supposed to be my last semester in Santa Rosa,” she said. “But now it might not be with all of this missed class.”

Rocha, who was evacuated from her home in Windsor, is already thinking about what students will need when they return to class next week, such as meals or other social emotional supports.

“Right now everyone is taking care of themselves, but when we get back, we have lost another week of instruction,” said Rocha. “This will be on their minds and we can’t just jump back into learning and the routine.”