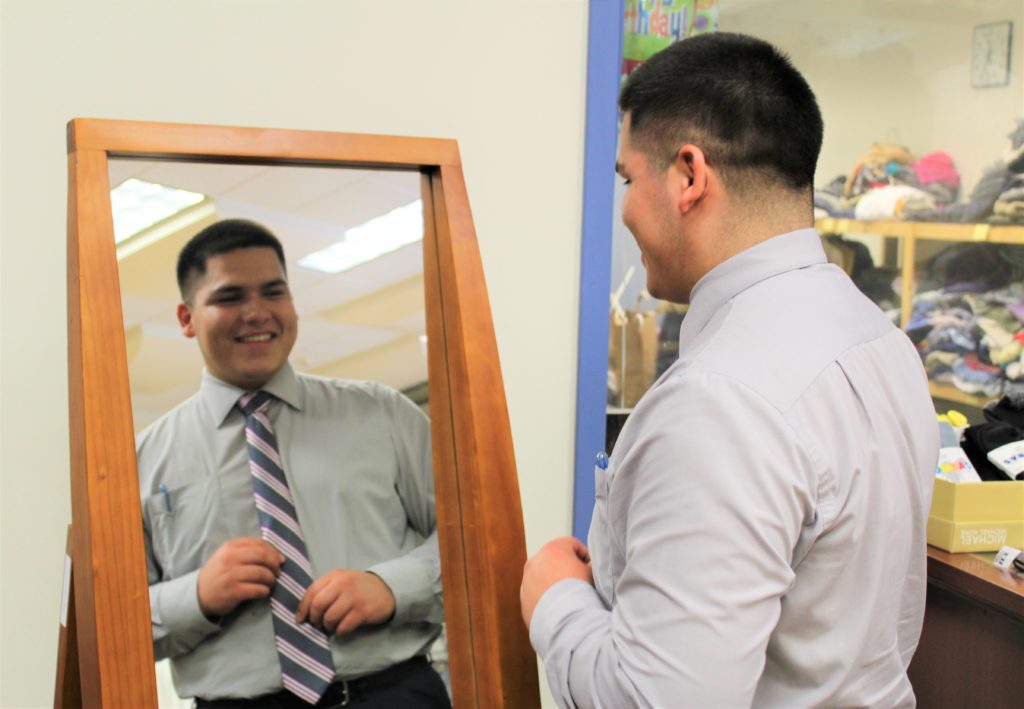 “Campus closets” are part of a widening trend to meet basic needs. 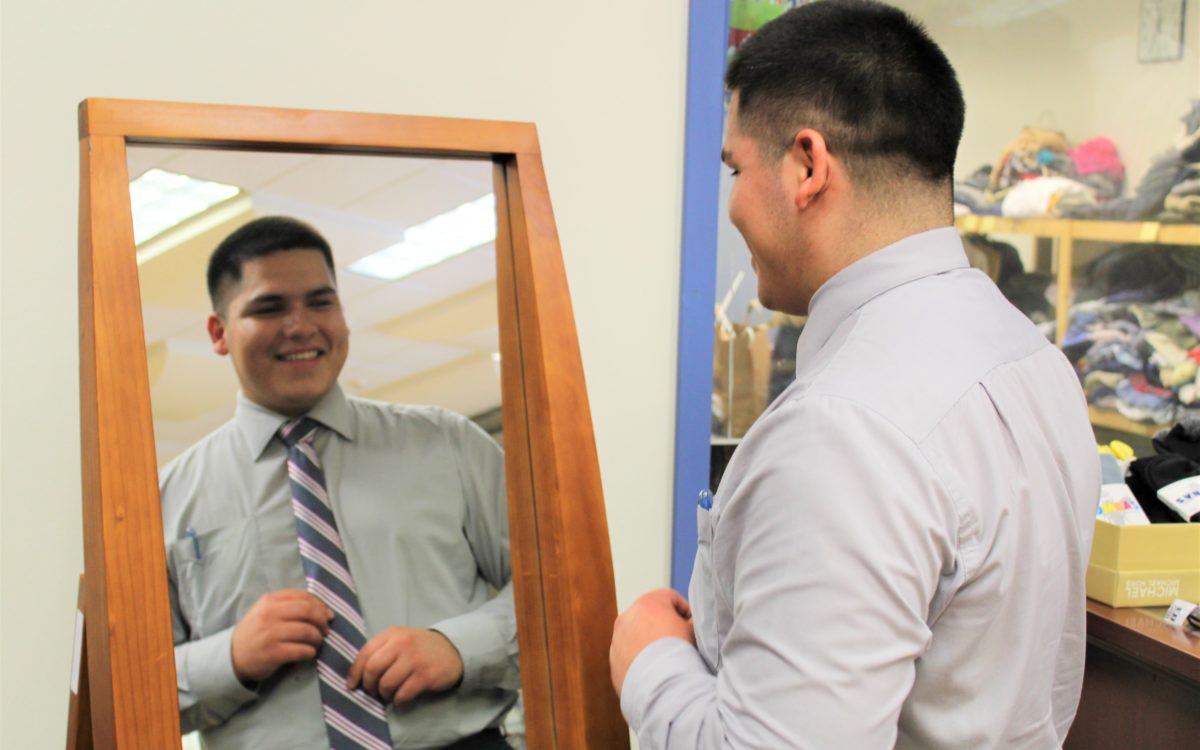 When Jonah Luna needed dress shirts for his career program at West Los Angeles College, he didn’t have to leave campus. And it didn’t cost him anything either.

He simply shopped at the school’s new wardrobe store that gives away donated professional clothing such as suits, dresses, shirts, ties and shoes to students who may be interviewing for jobs, taking on internships or starting careers.

The amply stocked West Wardrobe store on the community college campus is part of a statewide and national trend that seeks to meet students’ basic needs beyond financial aid for tuition.

Food pantries and emergency grants for students’ housing or other crises were among the first such responses. In the past few years, schools began hosting free clothes shops for job-level attire. The one at West Los Angeles opened in February and gives clothes, shoes and purses to about 20 students a day.

Many students could not afford the nice clothes they needed for interviews, job fairs and work, according to Trish Limbaugh, West Wardrobe’s founder and wife of the college president, James Limbaugh. So the college — which is in the Baldwin Hills about five miles north of LAX — decided to lend a hand, she explained.

“The point is to say we want to help you to succeed. And that doesn’t stop with a degree. It stops with life success in my mind,” she said as shoppers stopped by between classes to select ties and pick out pants. Nice clothes “builds their pride and builds their self-worth,” added Limbaugh, a former art instructor at Frostburg State University in Maryland.

As at other colleges, the initial main donors of apparel were faculty and staff. Now that has expanded to civic, business and church groups who collect clothes for the school, often from retired people who no longer need an upscale work wardrobe. All the items are supposed to be cleaned beforehand, although Trish Limbaugh has been known to personally wash and dry clean some at home if they need a touch up. Volunteers and work-study students sort through the piles, tag them and display them on racks and shelves.

Housed in a former choral music room on the campus’ main pedestrian thoroughfare, West Wardrobe looks like a nice retail shop in nearby malls. A big difference: no cash register or credit card machine. A sign explains the limits on the items students can take every six months (four shirts or sweaters; four pairs of pants or skirts; one coat; one suit; four pairs of shoes.) But Limbaugh waives those rules if a student shows real need.

Luna previously received garb from the shop and was back the other day for more: two button-down-collar dress shirts, one a blue and white plaid and the other a pale green. “This is a big help,” said Luna, who is 21 and juggles his information technology studies and a part-time restaurant job. “It takes the stress off me because sometimes you freak out about finances.”

He is required to wear business-casual or professional-level clothing even on campus as part of his participation in the Year Up program. That program is part of a national effort combining classroom learning and corporate internships to get young adults ready for well-paying jobs.

Similar shops — sometimes called “career closets”— have opened up around California, particularly in the last year or so. Several other community colleges, such as Crafton Hills in Yucaipa and Santa Monica College, have them, as do several University of California campuses, including UC Riverside and UC Merced.

The trend has taken off strongly at the California State University system, where 12 of the 23 campuses have some form of the giveaway stores, according to Denise Bevly, the CSU system’s director of student wellness and basic needs initiative. Those include the East Bay, Sacramento, Fresno, San Jose and San Marcos campuses.

The closets are “a really good resource for students to hopefully get a job and move into the work force,” Bevly said.

The widening “basic needs” movement often has focused on helping students who are living in cars, couch surfing or going without meals. In Sacramento, legislators are debating whether the state can afford to expand financial aid to cover housing and food costs as a way to help more students graduate from college.

As part of that trend, career closets seek to erase any stigma students might feel in seeking free dresses or jackets, Bevly said. “We want students to feel supported in and out of the classroom,” she said.

Fresno State’s Clothing Closet for professional attire opened three years ago in a former computer lab. It soon will be renovated to resemble a retail store thanks to a $20,000 grant from Macy’s aimed to help low-income students and those who are in the first generation in their families to attend college.

The closet has been serving about 1,000 students a year, according to Debbie Young, director of the career development center, which runs the shop. Demand jumps up when a job fair is held on campus or just before graduation, she said. Students are limited annually to three pieces of apparel, such as a blazer or skirt and two accessories, such as a pair of shoes or a handbag.

Young said two incidents around the same time pushed her to establish the closet. A few years ago, a student who is a single father told her he couldn’t afford both Christmas gifts for his children and the clothes for a job interview. (She gave him some clothes from her own family.) Then the widow of a local dentist asked about donating his suits to the school. Soon after, work began on the shop.

Fresno State senior Dylan Miranda, 21, recently received a dress jacket, slacks, a tie and shirt for a professional networking event where he connected with accounting firms. The business major could not afford those clothes at a regular store and was pleasantly surprised to learn that he could keep them permanently for job interviews or work.

“It helped me a lot. I was able to give out a good first impression,” he said. “I was basically able to dress for success.”

At West Los Angeles College, the wardrobe shop is open now 11 am to 2 pm Monday, Tuesday and Wednesday. Limbaugh said she hopes evening hours will be added in the fall for the many students who come to campus from day jobs. Compared to younger students preparing for interviews, those night students probably have a better sense of what they need. “They actually have a job that has certain expectations,” she said.