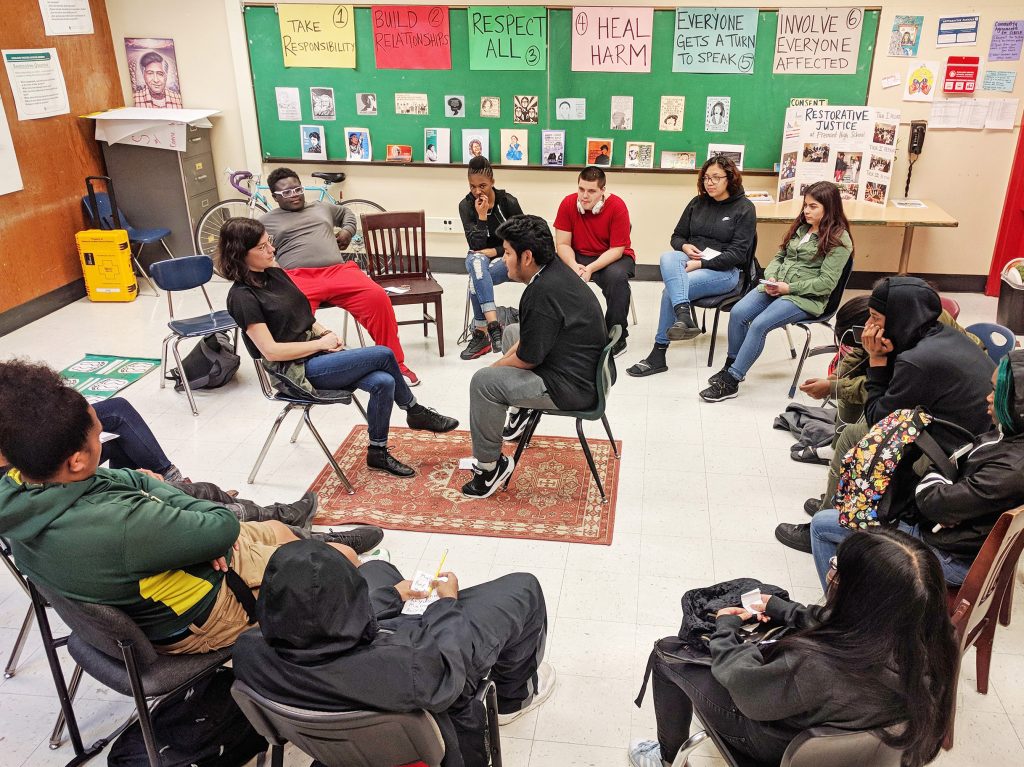 Legions of California educators have been trained in recent years in restorative justice, which is no longer considered an obscure alternative to traditional school discipline. Yet even in districts with well-established programs, finding and keeping funding for it remains a challenge.

Earlier this year, for example, the Oakland Unified School District board approved a package of austere budget cuts that appeared to have dismantled the district’s program, which was established more than a decade ago.

Although funds for the program have been restored, at least for now, its possible termination came as a shock to its many backers.

“I have lost all faith or trust in this board right now,” said a tearful Yota Omosowho, the board’s student member, amid cries of disbelief from students and others in the audience.

As districts have worked to reduce suspensions and expulsions, they’ve increasingly turned to restorative justice, which focuses less on punishment and more on righting wrongs and building healthy relationships within the school. It usually involves convening circles in classrooms or other school milieus that focus either on establishing bonds among students or addressing conflicts.

In the months that followed the school board’s action in Oakland, others in the community stepped up — most notably the city of Oakland, which gave a one-time $690,000 grant to the district to keep the program going for the 2019-20 school year. Foundations and philanthropists have also pledged support, said David Yusem, Oakland Unified’s restorative justice coordinator.

The city and community support means that the program will continue and a significant number of the 30 or so staff members whose positions were cut will have the opportunity to be reinstated for the 2019-20 school year.

Yusem, however, acknowledged there are no guarantees beyond next year. “We need to make adjustments based on the current fiscal reality,” he said.

Many educators and youth advocates say restorative justice has transformed school environments and led to significant reductions in suspensions and expulsions. But it also has its detractors who say it hasn’t been a sufficient replacement for punitive approaches and that classrooms have become more chaotic without the threat of traditional discipline.

Rooted in the criticism is an acknowledgement that districts have yet to allocate the resources necessary to provide schools with enough training and personnel to undergo the sort of fundamental changes required to truly transform school environments.

As a result, only a handful of districts have established programs. In addition to Oakland Unified, others include San Diego Unified and Los Angeles Unified. Each can point to its own successes and struggles.

Officials in all three districts say restorative justice, along with other reforms, contributed to large drops in suspensions. Suspensions dropped in Oakland Unified by 48 percent between in the 2011-12 and 2017-18 school years, according to state data. The drops in LA Unified and San Diego Unified during that same period were 76 percent and 41 percent, respectively.

Oakland’s restorative justice program began in 2006 and since has become a model that school districts nationwide — and even worldwide — have followed. In 2016, the program was highlighted in an Obama administration report on school discipline.

The constant presence of the facilitators on school campuses has been key to the program’s success, Yusem said. And he is hopeful that even with the cuts the program can continue under the same basic structure. But given the new funding realities, part or all of the program might have to be redesigned.

“We are just beginning to have those meetings,” Yusem said. “We’re taking stock and sort of going from there in terms of where are our priorities and how we can hit them while having less money.”

Los Angeles Unified was slower to adopt restorative justice than Oakland Unified, but the district has made significant investments in recent years and by 2020 will have a trained cohort of teachers and administrators in all of its schools, said Deborah Brandy, who is L.A. Unified’s director of district operations and oversees its restorative justice programs.

L.A. Unified’s commitment can be traced back to the beginning of the decade when students and community activists launched protests against the district’s discipline policies, specifically its practice of issuing “truancy tickets.”

The district responded in 2013 with an overhaul of its discipline policies. The signature reform was the School Climate Bill of Rights, which instituted restorative justice and made L.A. Unified the first district in the state to ban out-of-school suspensions and expulsions for student behavior deemed “defiant and disruptive” by school authorities. A large body of research shows that these suspensions are disproportionately meted out to African-American students and those with disabilities.

“One of the things we’ve tried to do with our [restorative justice] training is to help our people understand that discipline means to teach,” Brandy said. “People were reluctant at first to accept it, but over the years our schools have embraced the work.”

L.A. Unified’s restorative justice budget for the 2018-19 school year was $10.2 million, Brandy said. She said she hopes to maintain that level of funding but realizes that the district’s ongoing budget deficits — which will likely be exacerbated by commitments made earlier this year to settle a teachers’ strike — are always looming.

“All budgets are threatened by the fiscal realities,” Brandy said. “We have to make adjustments to programs and personnel. But at the same time the district is aware that initiatives like restorative justice are important.”

A new leader in San Diego

Facing similar backlash for its discipline policies as L.A. Unified, San Diego Unified in 2014 officially embraced restorative justice and other discipline alternatives by declaring itself a “restorative district.” In the years since, more than 1,000 district staff members — including teachers, administrators and counselors — have been trained in restorative practices, according to district officials.

In 2017, the district’s board of trustees also passed a “school climate bill of rights” and established a restorative justice department. The department’s $900,000 budget pays for four full-time staffers and a contract with the National Conflict Resolution Center to provide support and training. The San Diego-based center teaches various methods of resolving conflicts to a wide range of organizations nationwide.

“I’ve spent most of my life in the community as an organizer and experienced the frustrations of the community,” Ferrer said. “If you would have asked me 10 years ago if a school district would hire someone like me, I would say ‘never.’”

One thing she said she’s realized having worked in schools for the past several years is the need to integrate the practice into a larger effort to improve school climates rather than trying to keep it separate from other discipline alternatives, which is what some practitioners advocate.

“I’ve seen benefits of that approach,” Ferrer said. “But I’ve also seen what happened to Oakland and how you can lose it all during budget cuts.”