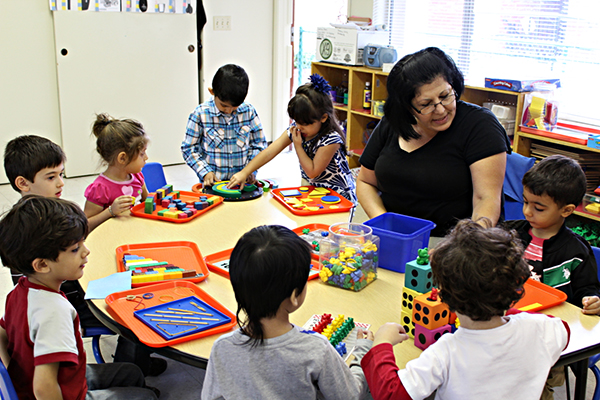 The final report of the California Assembly Blue Ribbon Commission on Early Childhood Education, released Monday, sets out a long-term vision for how to overhaul the early childhood education system in California, with short-term and mid-term milestones along the way. For example, it sets a long-term goal of universal access to early education, meaning eventually every child, regardless of income, should be able to enroll in preschool, but focuses on expanding access first to children in low-income families.

At least 25 early childhood bills are currently under discussion in the Legislature. Many of them would move toward the goals laid out by the Blue Ribbon Commission.

The report, which is more than 100 pages long, is the result of two years of deliberations and hearings held throughout the state with parents, child care providers, early learning experts and advocates. Commissioners included Assembly members as well as early education experts, child care providers and advocates for children and parents. A draft of the report was released in March.

Gov. Gavin Newsom made early education a major focus of his campaign and in his January budget proposal proposed almost $2 billion to expand services to young children.

The Blue Ribbon Commission recommends that families with average or low incomes should not have to pay more than 7 percent of their incomes for child care and that early childhood teachers be paid similarly to K-12 teachers, among many other goals.

Erin Gabel, deputy director of external and governmental affairs at First 5 California, a statewide commission focused on children newborn to 5 years old, said the report is timely because it lays out specific steps for the Legislature to take to expand preschool, child care and other services that the governor has also proposed.

“The Blue Ribbon Commission is getting a kick-start in the right direction so we are not having to wait to think about how to respond to the governor’s vision and incredible commitment, we’re all ready to get started in this first year,” Gabel said.

There are early childhood bills already moving through the Legislature that would provide subsidized preschool and child care to more children, increase pay for child care providers and preschool teachers, help teachers get more professional development and training and provide funds for building or renovating more child care and preschool classrooms. There are also bills that would increase pay and job protections during paid family leave and would provide screening for more infants and toddlers to identify developmental delays — also goals included in the commission’s report.

Many of those bills were authored by Assembly members who form part of the commission. Most notably, commission co-chair Kevin McCarty, D-Sacramento, introduced a package of three bills, AB 123, 124 and 125, now co-sponsored by several other lawmakers. AB 123 would provide full-day preschool to all low-income 3-year-olds and to all 4-year-olds, regardless of income, in school districts where at least 70 percent of students qualify for free and reduced-price lunch. McCarty said he expects 70,000 children to benefit from the bill. AB 124 and 125 would increase reimbursement rates for programs that enroll low-income children and establish bond funding for building or expanding child care and preschool facilities.

Blue Ribbon Commission co-chair Blanca Rubio, D-Baldwin Park, introduced AB 167, which would provide more care for infants and toddlers from birth to 3 years old, meeting the quality standards of the federal Head Start program. Another commission member, Assemblywoman Eloise Gomez Reyes, D-San Bernardino, introduced AB 194, which would provide $1 billion for more vouchers for low-income families to use with the child care provider of their choice.

“As a former teacher, I know that what happens before children enter kindergarten during those early years of rapid brain development is so important to their ability to succeed in school and in life,” said Rubio in a written statement.

Assembly Speaker Anthony Rendon, D-Lakewood, who convened the commission in 2017, said the goal was to have a realistic set of short-term, middle-term, and long-term goals, though what’s doable each year will depend on the funds available in the budget.

“I want it to be used as sort of a guide, a path for policymakers to follow,” Rendon said. “I think it’s also a document for activists and folks in the early childhood education space to use to rally around and hold us accountable.”

The Blue Ribbon Commission’s report differs from similar documents, in part because it includes parent recommendations, such as advertising child care resources in multiple languages and in easily accessible places like hospitals, buses, doctor’s offices and on television; training prenatal doctors to inform parents about child care and allowing parents to sign up for a child care subsidy when pregnant.

The commission held focus groups with parents in the San Fernando Valley, Inglewood, Fresno and the San Francisco Bay Area.

“It was a great experience because we were able to have our actual experiences and details be recorded and we knew that they were going to be received by actual lawmakers,” said Yenni Rivera, a mother who participated in the focus group in Inglewood. “It felt like we were finally being heard, finally we have a voice, finally we have a place where we can say what has not been working, and what would work.”

The commission recommends establishing an Early Childhood Policy Council made up of parents, providers and other stakeholders to advise the Legislature, the governor and the superintendent of public instruction on early education.