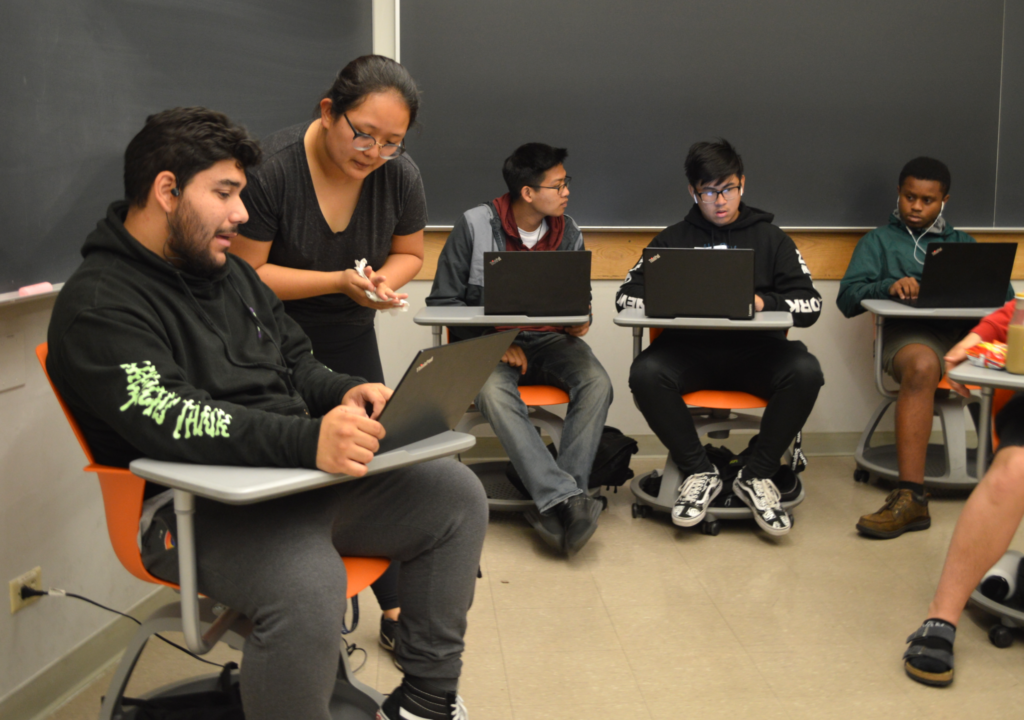 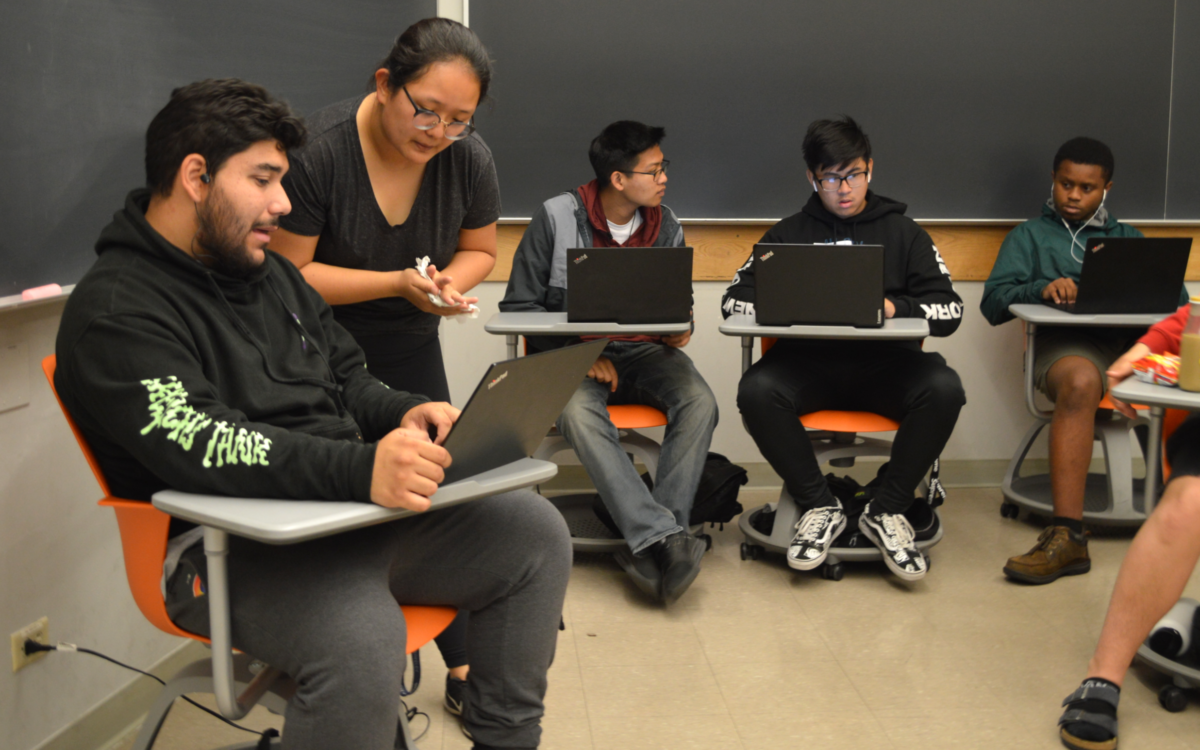 Sometimes engaging students in math and science means hands-on experiments and projects. Other times, it simply means asking how they’re doing that day.

At SMASH Academy, it’s both. Here, high school students participate in five weeks of science, math, engineering and technology (STEM) lessons. They live on a college campus and in the evenings have opportunities to meet with mentors and professionals in a variety of science and technology careers. Then they come back and repeat the process for two more summers and once a month on Saturdays throughout the school year.

The program, which is free, aims to increase diversity in STEM fields by primarily serving students who identify as African-American, Latino, Native American or Pacific Islander. Although all students can apply, the majority of students in the program will be the first in their families to attend college and those who are from low-income families.

There has been a boom in the number of college students graduating with STEM degrees in California in recent years, increasing by 55 percent between 2010–11 and 2016–17, according to the Public Policy Institute of California. Bachelor’s degrees in computer and information sciences almost tripled during the same period. But disparities exist among those earning these degrees: Nationwide, only 3 percent of degrees in computer science were awarded to black women and just 2 percent to Latinas, according to a 2018 report by the Kapor Center, an organization that aims to increase diversity in STEM education and careers.

Gerald Morgan, a math facilitator at SMASH’s UC Berkeley chapter, said growing up he had few role models in science and technology fields who looked like him. “I never met a black coder before I got to college,” he said.

SMASH provides rigorous coursework, recruits instructors from diverse backgrounds and focuses on relationship-building. Morgan holds a check-in with students every day before lessons get started and often shares personal stories to encourage students to open up. “I want to make sure I know how everyone is feeling,” he said.

Hands-on science, math and computer science projects are central to the program’s curriculum. German Jimenez, who will be a junior at a public high school called Life Academy in Oakland this fall, was busy this summer at SMASH designing ways to reduce air pollution in the San Francisco Bay Area. His idea was to develop a website with an interactive map that users can hover over and see levels of air pollutants. Then he planned to design a bike rental program to help cut down on carbon dioxide emissions from vehicles.

The project ties his lessons together: In computer science, Jimenez built a website to host the project. In math, he learned how to prepare data and statistics for a digital map of air pollution. In science, he learned about air pollution and how it disproportionately affects low-income communities living near pollution sources like highways.

The statewide changes could increase the number of students who have access to STEM instruction. Black and Latino students are less likely to attend high schools that offer advanced math or science classes, as well as computer science classes, than white and Asian students.

SMASH, an education initiative of the Kapor Center, launched in 2004 as the Summer Math and Science Honors Academy, with UC Berkeley as its first partner. Now referred to simply as SMASH, the program has expanded in California to Stanford University, UCLA and UC Davis. CEO Eli Kennedy said there is interest in expanding to the Central Valley in places like Fresno and Merced.

Unlike many science and math camps, SMASH is free for participants, specifically targets students who come from underrepresented ethnic and racial groups in technology and the students return each summer for three years.

Students at the residential summer program spend their day taking courses in math, science and computer science at one of the university campuses. Every SMASH location also offers a variety of electives. At UC Berkeley, students take classes on SAT preparation, expanding access to healthy food, financial literacy and an animation course designed by Pixar, located in nearby Emeryville.

A 2018 report on the program showed that since it began, 86 percent of students went on to attend a 4-year college. And 83 percent said they intended to major in a STEM field, compared to the national average of 45 percent of college freshmen.

Several students said that the fact that the program is free is what initially drew them in. “If it wasn’t free, I don’t think I would have done this,” said Nikka Bourn, who will be a senior at McClymonds High School in Oakland in the fall.

At the summer program, Bourn and other students in their third year of the program learn how to code using JavaScript, dive into limits and derivatives in math and take physics classes that a focus on challenges like how to provide sustainable energy to low-income communities.

In addition to its California locations, the program is also offered to local high school students at Morehouse College in Atlanta, Georgia; the Wharton School in Philadelphia, Pennsylvania and Wayne State University in Detroit, Michigan. This year it also launched programs at the Illinois Institute of Technology and Southern Illinois University Carbondale.

One challenge the program faces is limited capacity. Out of nearly 200 applicants, SMASH UC Berkeley this year selected 35 students for its sophomore cohort. In addition to being highly selective, the application process — and commitment to return for three successive years — can be daunting for some students, said Kennedy, the program’s CEO. And that can deter some students from applying in the first place.

Relationship-building is important across the program, from residential life to calculus, to a College Success course where students get help preparing for college applications and life after high school. Miguel Anderson, who will be a senior in the fall at Summit K2, a charter school in El Cerrito, said, “Everyone takes the time to make sure you understand. I don’t get that individual attention all of the time at school.”

Other students said that they appreciate the tight-knit group created by returning year after year. Group chats online keep friendships going even when they aren’t on campus. Shared digital photo albums preserve memories of their time in the summer program.

The program makes an effort to foster relationships after students complete it. For example, an alumni program, called SMASH Rising, connects former students to internships once they are attending college.

“When you live here, it’s not just work and school,” Bourn said. “You grow with relationships in your free time or cohort bonding. You’re always together and learning, even when you’re not in the classroom.”