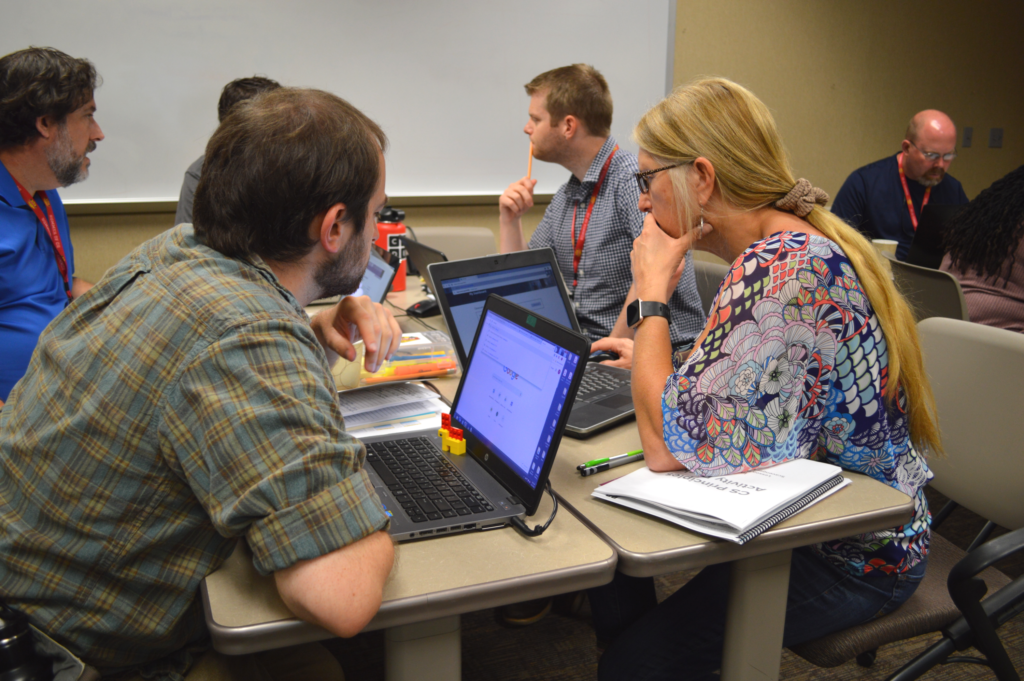 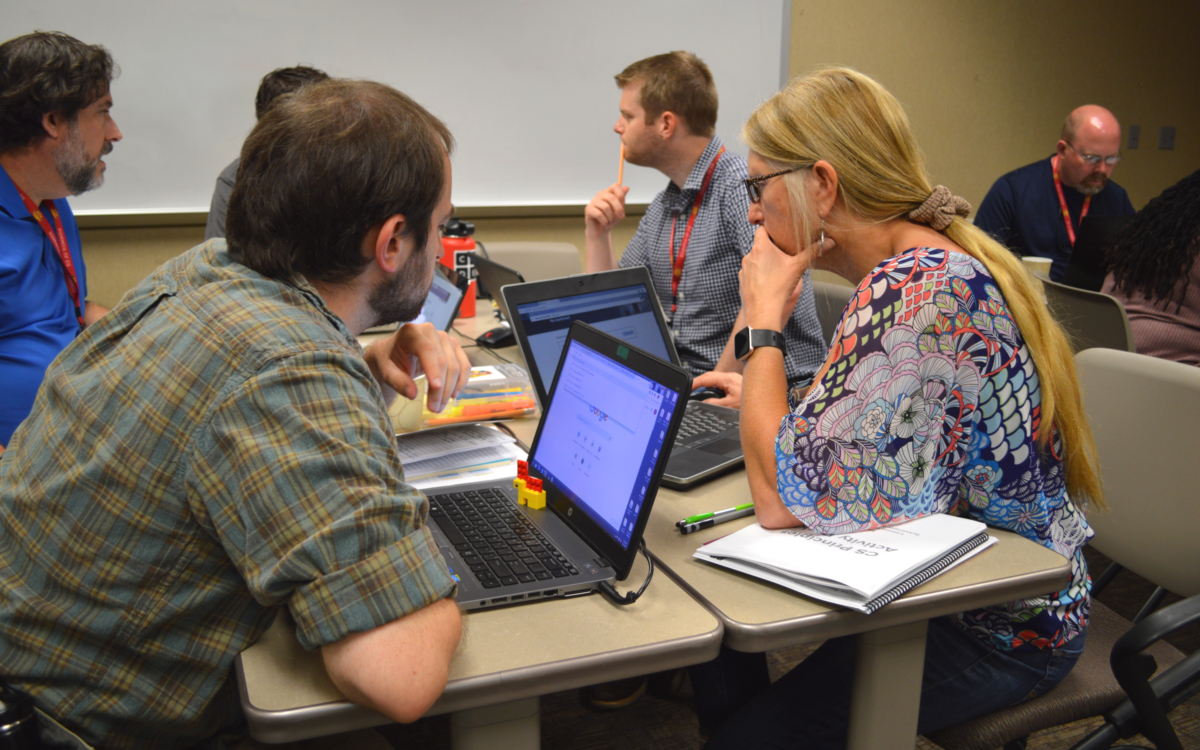 As California pushes to increase access to computer science education for K-12 students, schools across the state this summer are preparing to ramp up course offerings and equip teachers to lead computer science courses.

Many teachers and administrators steering those efforts gathered in June at the Summer of CS, a week-long program led by the Sacramento County Office of Education and Computer Science for California, or CSforCA, a campaign that promotes access to computer science education in California.

The event brings together about 100 California teachers from elementary through high school from around the state. The goals are to prepare them to teach a computer science class or lessons when school starts this fall and to expand access to computer science for all student groups.

Increasing access to computer science courses has become a priority in California. Advocates say it is crucial to building a robust and diverse tech economy and that it will provide students with an understanding of computers and the internet, which could be applicable in many fields.

Linda Dewberry, a computer science teacher at Sheldon High School in the Elk Grove Unified School District near Sacramento, said all students can benefit from a computer science course — even if they aren’t interested in working in STEM fields. “I think CS should be mandatory, not an elective,” she said. “Everyone uses technology anyway. I don’t understand how in the 21st century you wouldn’t require this.”

This year Gov. Gavin Newsom also called for $1 million in the state budget to fund the position of a new California Computer Science Coordinator and to support teachers learning how to teach computer science.

The Summer of CS is part of a larger program the Sacramento County Office of Education is leading with the help of a nearly $1 million grant from the K-12 Strong Workforce Program, a partnership between the California Community Colleges Chancellor’s Office and the California Department of Education that funds career technical education initiatives.

The grant will support the creation of a new Computer Science Hub connecting 23 districts between Sacramento and the Oregon border that will add more districts over time. Officially launching this September, the hub will connect teachers and will be led by a team of six officials from the Sacramento County Office of Education. Staff from the Elk Grove Unified School District and Cosumnes River College in Sacramento will also work with the hub.

Services including workshops on computer science curriculum, technical assistance for schools and developing student programs such as summer camps and hackathons will all be available through the hub, said Jared Amalong, career and technical education coordinator for the Sacramento County Office of Education. Computer science teachers will be invited to meet twice a year to share best practices and meet with technology employers.

The announcement of the hub coincides with a statewide push to get more computer science courses in California schools and expand learning opportunities for teachers. Only 3 percent of California’s 1.9 million high school students were enrolled in a computer science course in 2016-17, according to a report from the Kapor Center (a nonprofit that focuses on equity and access in technology) and CSforCA.

The impetus of the Summer of CS was to narrow these disparities, Amalong said.

“If you look at suburban districts, there is often more training because there are more personnel for that,” said David Gordon, superintendent for the Sacramento County Office of Education. “This is a good start, but we have to stick with it.”

Pressure for more computer courses is also coming from students themselves.

Trey Ferris teaches science at Greenville Junior/Senior High School in the Plumas Unified School District, a small rural district east of Chico. Out of 84 students enrolled at the school, at least 20 told him they want to take the computer science course he will begin offering in the fall.

Ferris has taught chemistry, biology, physics and other science courses at his school, and was up to the task of learning to teach the new course. Part of the appeal, he said, was to acquire a new skill and have a change of pace in his teaching routine.

At the Summer of CS event, middle and high school teachers participated in a variety of different workshops. One focused on how to teach an intro-level computer science course called Exploring Computer Science. Other workshops offered guidance for teaching Advanced Placement Computer Science Principles, which aims to introduce students to basic computer science concepts for college credit.

About 50 school administrators and counselors also attended a workshop where they brainstormed ideas to overcome barriers to increasing access to computer science. One attendee suggested partnering with nearby districts that have these courses and connecting teachers. Another suggested creating peer-mentoring programs for girls, African-American students and Latino students in computer science.

It’s a lot to pack into five days. “There’s no way to teach the whole curriculum in a week, but we can teach them who to talk to and how to figure this out,” said Doug Lewin, a computer science teacher at Vista del Lago High School in the Folsom Cordova Unified School District who led the workshop for the AP course.

The workshops include strategies for helping students understand the subject material, such as keeping journals and giving constructive feedback to their peers, as well as lessons in specific computer science topics such as binary systems and debugging code.

To get comfortable teaching the material, teachers were also asked to lead lessons on topics such as number systems and routers, devices that direct information between computer networks. After their recent session, the teachers will come back for four follow-up workshops during the school year to continue learning the computer science curriculum they were introduced to this summer.

“They asked who wanted to teach it and I jumped on it,” said Bryan Rivas, a math teacher at Fontana High School, who will be teaching AP Computer Science Principles this fall. Having a math background helps, he said, but there’s still a learning curve. “I’m the only one teaching computer science at my school site in Fontana. It might be tough, but it really helps working here with people from different ideas and backgrounds.”

Educators with backgrounds in all subjects have been stepping up to teach computer science. Elisabeth Henson, an art teacher at Portola Junior/Senior High School in the Plumas Unified School District, has taught graphic design but never computer science. She was inspired to teach the new course in part because she hopes to combine graphic design with coding projects, such as designing an app. “There are so many careers that involve both computing and the arts. Look at video games, mobile apps, music, how we consume all of our information,” she said in an email. “There is a natural connection between these subject areas.”

Much work remains to get teachers the support they need and to be able to continue to fund those efforts, said Gordon, the county superintendent. “The work is ahead of us.”