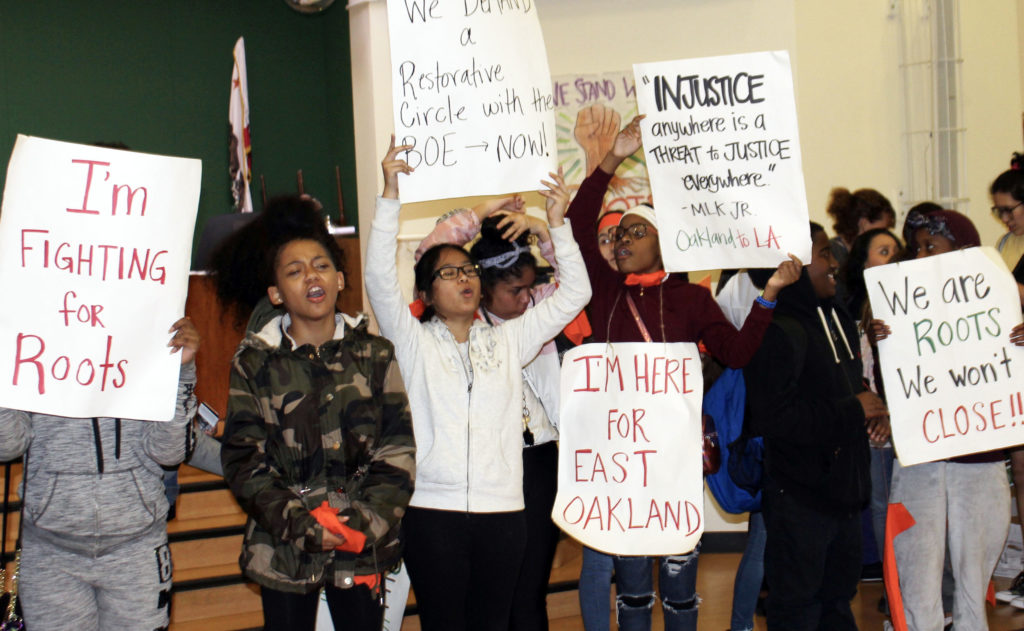 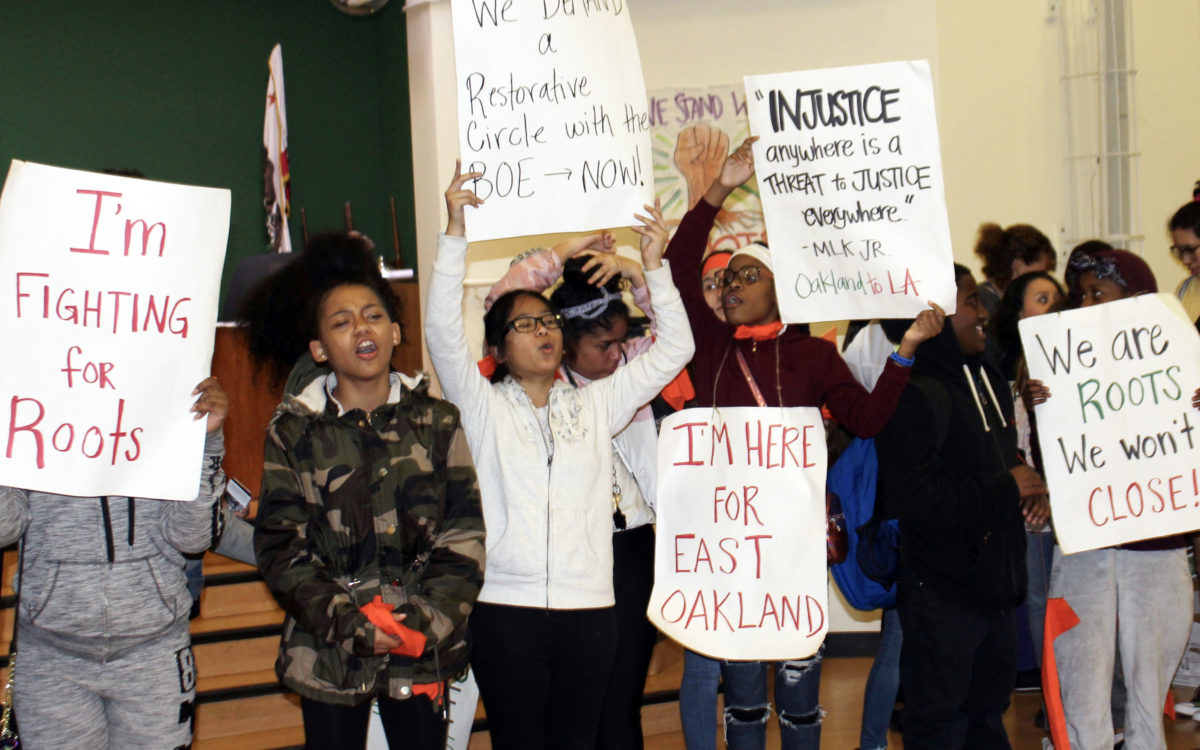 A proposal to make deep cuts to the Oakland Unified School District’s renowned restorative justice program — part of an overall effort to slash nearly $22 million from next school year’s budget — has triggered loud opposition from youth advocates, students and parents.

Restorative justice is an increasingly popular alternative to traditional approaches to school discipline such as suspension and expulsion and is based on the offender making amends for the damage his or her behavior may have caused.

The current proposal before the school board calls for more than $850,000 in cuts to the 2019-20 budget that the head of the program says would likely lead to the elimination of all but a handful of positions from the district’s 31-person restorative justice team.

The cuts would effectively gut a program that has become a model for implementing alternatives to traditional discipline in schools, said David Yusem, the district’s restorative justice coordinator.

“Really what it looks like is they’re laying off almost all the [restorative justice] people,” Yusem said “It’s devastating — the amount of brain power they will lose is immeasurable.”

Michael Gilbert, co-founder and executive director of the San Antonio-based National Association of Community and Restorative Justice, said his organization chose in 2017 to hold its bi-annual conference in Oakland largely because of the school district’s reputation.

“Oakland has been featured as a leader in this field and a model that other school districts need to consider when they are planning their own programs,” Gilbert said. “This is very disappointing to hear — I think of all the sunk costs that went into creating such a robust and effective program.”

Under the proposal being considered by the board, all four of the central office coordinators would be cut along with central office funding for the school-based facilitators.

The program became a target when Superintendent Kyla Johnson-Trammell proposed cuts in the central administration budget. Half of a facilitator’s salary comes out of the district’s central office budget and the other half is covered by the school where he or she works.

“Reducing some staffing doesn’t necessarily mean the service is completely going away,” Johnson-Trammell said during a special school board meeting on Monday.

However, Yusem told EdSource that at best only a few of the schools will be able to keep their facilitator on staff without the central office funding. The loss will be greater than $850,000 when factoring in schools that won’t be able to make up the funding, he said.

Beyond restorative justice, the budget cut proposal also eliminates another alternative approach to school discipline — the district’s Positive Behavioral Interventions and Supports (PBIS) program — and reduces its social and emotional learning department to one staffer, Yusem said. PBIS focuses on modeling positive behaviors and improving school climate and social and emotional learning emphasizes self-control and social skills along with academics.

The fight for restorative justice is set against the backdrop of a district in crisis. Oakland Unified leaders say millions of dollars in budget cuts and school closures are required to keep the district solvent in the coming years. Meanwhile, teachers are poised to strike over a number of issues including pay and class sizes.

Schools in recent years have turned to alternatives like restorative justice and PBIS as studies increasingly show that suspensions and other punitive discipline measures are not as effective as once thought and are disproportionately meted out to students of color and those with disabilities.

A cornerstone of restorative justice is the circle process in which students gather in a circle to talk about what’s happening in their daily lives and work to resolve conflicts.

The Oakland program is more than a decade old and Yusem said he receives two or three calls a week from districts across the country asking for advice or requesting site visits. In 2016, the program was highlighted in an Obama administration report on school discipline.

Students, their parents and community advocates have packed recent school board meetings to protest the proposal. Dozens of students have shown up to recent board meetings, including Monday’s, to speak in favor of restorative justice and other discipline alternatives. Last Friday thousands of students skipped school as a show of protest, with 500 or so marching on the district’s downtown office.

Yota OmoSowho is a senior at Oakland High and one of the student representatives on the school board. She arrived in Oakland from her home town of Lagos, Nigeria when she was a ninth-grader and says restorative justice circles were “essential” to her eventually feeling comfortable in her new surroundings.

“I struggled a lot during my freshman year, then my sophomore year I got involved in restorative justice,” OmoSowho said. “It helps you be a stronger part of the high school community — it is easier to learn when you feel more comfortable in class because you’ve sat in circle with your peers and you know they have your back.”

OmoSowho confronted Johnson-Trammell during Monday’s board meeting, asking her: “What is our vision for [restorative justice] in the district right now?”

In response, Johnson-Trammell said: “I would say in terms of vision, we definitely want to hold fast our vision of having community schools.” She added that officials are struggling to come up with a “sustainable model,” since “as a district, we’re not in position to do it all ourselves.”

Teiahsha Bankhead, executive director of the community-based nonprofit Restorative Justice for Oakland Youth, said the local restorative justice community “is in crisis” trying to come up with alternative plans.

“It’s not just restorative justice, it seems like the whole behavioral health framework has been decimated,” Bankhead said. “And it seems it is being done in draconian ways without consideration for either the short or long-term impacts on children and their families.”

Bankhead and others acknowledge that many in the district’s leadership believe in restorative justice and that it and other climate and culture programs are being targeted because they are not required by state or federal law or regulations and are funded by unrestricted money.

Money in many other budget line items are not discretionary. They are required programs or funded by federal grants or local bond issues and cannot be cut or moved to other programs.

Members of the school board “by and large support restorative justice and are in a very untenable place and must make many difficult decisions,” said Nina Senn, who just left the board in January after serving one term.

“Showing the board how it matters to the community is very important and providing as much support and awareness as possible is helpful,” Senn said. “What is not helpful is blaming the board — we need to find ways to help them.”

The program’s budget currently includes about $700,000 from private foundations, Yusem said. Johnson-Trammell and others say that instead of eliminating the program work needs to be done to attract more support from foundations and other governments, specifically the city of Oakland.

Johnson-Trammell told the public Monday night that members of her staff have reached out to the city to inquire whether some proceeds from its “sugar tax,” which must be directed to children’s health issues could be directed toward restorative justice in the district.

It “shouldn’t just fall on the schools,” she said. “It’s definitely something we value, but we know we’re going to need more funding from our city.”

Also during Monday’s meeting, board member Roseann Torres said she is “losing sleep” worrying about what will happen to students if restorative justice is cut. In particular, she’s worried that the district could see a reduction in average daily attendance funding because of more absenteeism and an increase suspensions an expulsions without restorative justice.

Torres wondered if school security officers could be “repurposed” as restorative justice facilitators.

Yusem has said it’s unrealistic to think that security officers or other staffers could be simply swapped into the facilitator roles.

“It can take years to really understand it and teach others and support others,” Yusem said. “We have spent a lot of time and money cultivating these leaders — what we would lose would be more than just a position.”