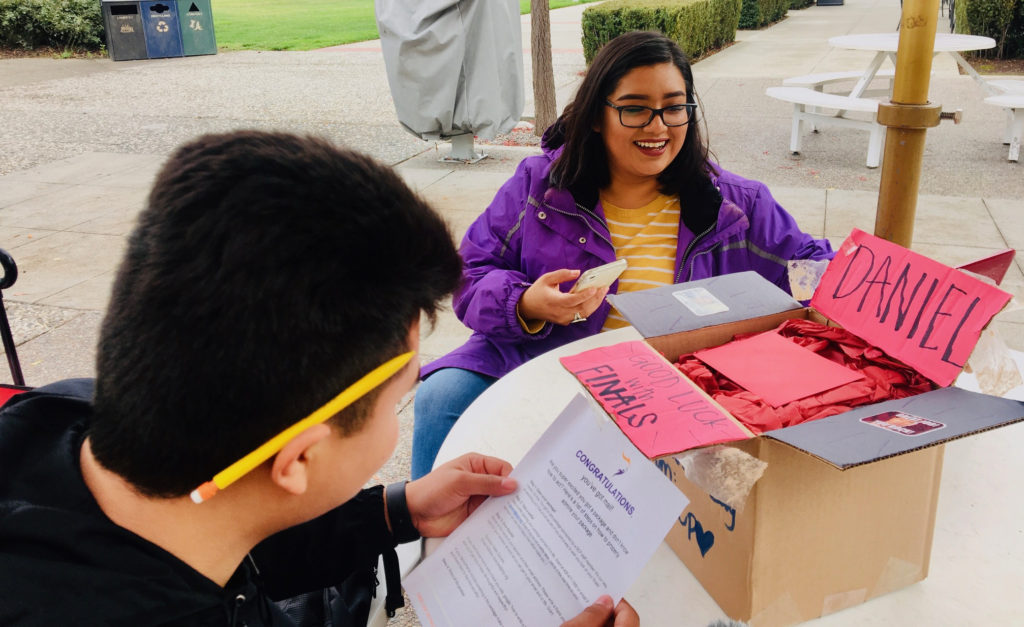 Care packages and an encouraging word, timed for the start of final exams. 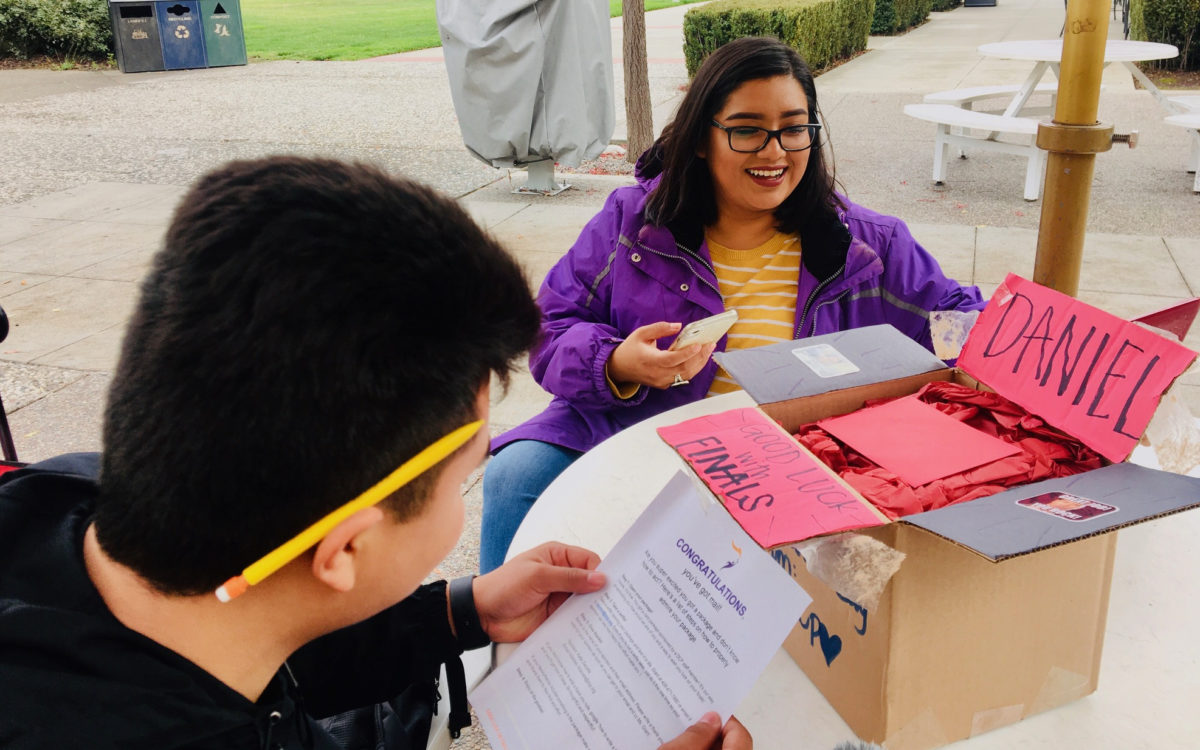 Not long ago. Dulce Grant was a college freshman, nervous and unsure as the first in her family to attend college. Now 27 with a bachelor’s degree in political, legal and economic analysis, she’s mentoring other students from her high school facing the same insecurities and pressures. Occasionally, she stops by campuses to see how they’re doing.

On this day, early in December, she wheeled a wagon with cardboard boxes for a half-dozen first-year students at California State University, East Bay in Hayward to an outdoor table behind the student union.

In the 2017-18 school year, 1 in 4 freshman students enrolled at the college didn’t return the following year. For the 23 CSU campuses statewide that year, the dropout rate was nearly 1 in 7. Grant, the alumni success counselor at Downtown College Prep, a charter school network with two high schools and two middle schools in San Jose, is determined her students won’t be that statistic.

Her boxes were typical “care packages” that college students get from home this time of year. Peanut M&Ms and other candies, pairs of socks, hand sanitizer, Mexican cookies, microwave popcorn, chips, a package of noodle soup, a coffee mug. Only in this case, they were a gift from DCP, as they call the school they graduated from in June. And each package included a handwritten letter from Grant or another DCP adviser.

The sweets were nice. But it was the implicit message that moved Daniel Silva, the first to arrive to pick up his package. “It’s a reminder,” he said with a fleeting hitch in his voice, “we still have your back and we’re in your corner. And whatever you need, we’re here for you.”

“Dead week,” the days preceding first-semester final exams, can be intense for college students — but especially so for those who are the first in their family to attend college, including Daniel and nearly all of the graduates from low-income, Latino families at DCP. On top of the usual panic over procrastination and anxiety about grades, there’s a mix of emotions: pressures from family expectations, tight money and, sometimes for those living at home, guilt over not taking care of younger brothers and sisters or pitching in more to pay the rent.

There’s the nagging insecurity — common enough to be named “imposter syndrome” — the sense that you don’t belong at college among other, more privileged, seemingly smarter students who appear better prepared and more confident. To make it worse, often there’s no one around campus or at home to share your feelings and fears with.

Grant understands. She had been one of the top students in her graduating class at DCP in 2011. Then, in her first year at Mills College in Oakland, she found herself struggling for the first time. “So going into finals was very stressful. I was not sure that I was going to pass an international relations class, and that was the first time that I ever had to deal with that.”

“I had a feeling of guilt of like, ‘Well, I’m here to do school and I’m not performing the way I used to be’,” she said. “I didn’t talk to anybody about it because it was very shameful to me, or I didn’t want to stress my parents out — or anybody, for that matter.”

“Many of my students come from the same background as I do. And so I know that my story can also help them,” she said.

That’s why she makes her rounds this time of year. Earlier on the day she was at Cal State East Bay, Grant was at San Francisco State. The day before, UC Merced and CSU Stanislaus. UC Davis the next day, then San Jose State, where the largest number of students attend. A dozen care packages were mailed out of state. Three part-time mentors, all DCP grads, hand-delivered packages to community colleges; in all, 127 packages.

Most large public high schools don’t have the staff or capacity to track students after graduation. It’s a challenge and takes a commitment for small schools, too, like DCP, with about 750 students combined in the two high schools, one in a renovated building supply store next to San Jose State and one a few miles away in East San Jose. DCP depends on grants, donations and philanthropy for its outreach to college students.

Since its founding 20 years ago as the first charter school in San Jose, DCP has stressed “comunidad” — community — and the participation of alumni as role models. Like other college-focused charter organizations, DCP has come to recognize that it’s not enough to get students into college; their mission extends to graduation from college.

Data show why. In DCP’s class of 2012, 57 percent of students who enrolled in a 4-year-college graduated after six years, said Edgar Chavez, DCP’s Director of College Success.

Looking at the total graduating class in 2012, including those who went to college and those who didn’t, 35 percent earned a bachelor’s degree in six years. That is more than double the national rate of 14 percent for high school graduates who come from high-poverty schools like DCP, where 85 percent of students come from low-income families, according to the National Student Clearinghouse’s most recent report. 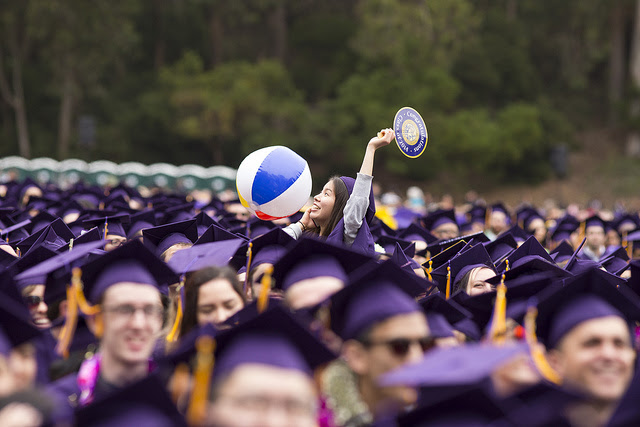 CSU campuses have responded to the call to lower first-year dropout rates and raise graduation rates, particularly for students from low-income families, with large programs and small, welcoming gestures. Instead of harsh letters that students on academic probation had received, which could “scare them away,” Cal State Northridge sends out softer messages, directing students to campus resources and telling them “we want you back,” said Kim Henige, the college’s director of Academic First Year Experiences, coordinating workshops and programs to help new students transition successfully to the university.

Cal State Northridge is hiring an associate vice president for student success who’ll be looking to remove obstacles, like unpaid parking tickets, that can take students off track to remain in school, she said. Henige directs the seminar University 100, a course for first-year students that teaches study habits and time and money management. It has increased the rate of retention for the one-third of first-year students who take the course, Henige said.

From summer melt to winter meltdowns

For DCP first-year students, contacts with mentors continue soon after graduation to help combat “summer melt” — the phenomenon in which upwards of 10 percent of students nationally who plan to go to college don’t show up, because of money problems, late registrations, family issues or cold feet. DCP now has data on almost every graduate, Chavez said. The school uses the National Clearinghouse data exchange and its own information to create a student tracker. The three mentors, all DCP grads, and Grant meet every student for at least 20 to 30 minutes over the summer to see that financial aid is secured and courses are selected.

The mentors are the “first line of defense” who can flag more serious issues for the alumni counselor, Chavez said.

And if students decide, after multiple meetings with their mentors and her that they aren’t going to enroll in the fall, “we usually always have a plan for them to reconsider or come back in the spring,” Grant said.

The 3-year-old mentor program’s biggest impact has been to keep students who start out at community college on track to transfer to a 4-year-college, Chavez said. The transfer rate from community college has risen from an average of 9 percent three years ago to a projected rate of 31 percent this year, he said.

DCP’s goal is to place a mentor in every college where there are DCP students, Chavez said. Meanwhile, alumni like Alejandra Moran play an informal role in giving back by reaching out to other DCP students. A second-year criminology major at CSU East Bay, she stopped by DCP to see Grant, who helped get her through her first year.

“It was scary, but not like too scary because I knew I could just go to Dulce and she answered questions for me and made sure I wasn’t stressed out,” she said. “Like when would financial aid come and what courses I needed for my (general education) requirement. It helped a lot.”

To augment personal visits, Grant and the mentors prepared a video on study tips for finals for Downtown College Prep’s YouTube channel, where it joined others on time management and on how to have a successful first week in college.

Grant is heading into one of her most demanding times of the year. Christmas break is the winter variant of summer melt.

“I often get calls where students are having meltdowns because they didn’t pass a class or two or they’re on academic probation,” Grant said. “Every challenge that’s happening then becomes a reason to leave the campus. That’s where we come in and kind of help them separate everything, that one thing doesn’t necessarily have to do with the other. If you leave school, your family problems are not going to go away.”

“A lot of those difficult conversations that happen in early January,” she said.

Silva said he has “struggled a bit” during his first semester — his “first grasp at reality” as an adult, “trying new things out, finding what things fit for me. Study habits or kind of things I should be doing.”

His older brother was accepted to Humboldt State, but couldn’t afford to go. So now, as the first in his family to attend college, Daniel said, “I’m doing this for me and I’m doing this for my family and I’m taking advantage of the opportunity my brother didn’t get to have.”

“And it’s been hard,” he said, opening his care package. “But I’m satisfied as to how much I’ve put in towards this. How much hard work I’ve done and how I’ve noticed little things that have changed within me as a person.”