10 California districts struggle, and find some success, as they shift to Common Core math 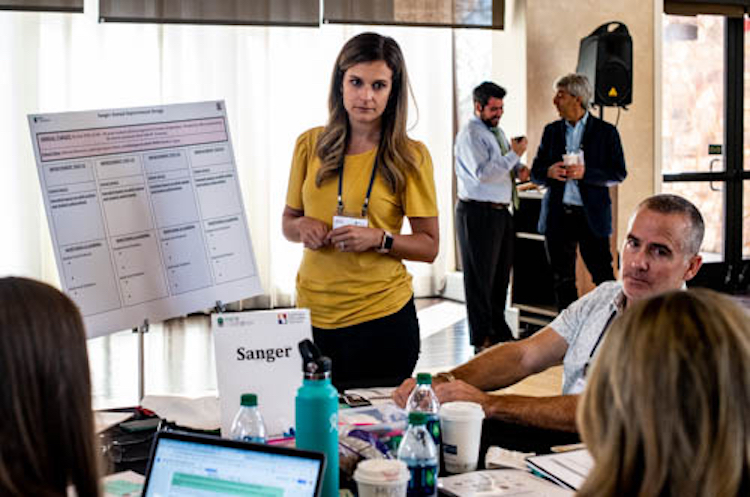 Evaluation of program offers lessons and guides for improvement

For five years, a San Francisco foundation funded, and a research organization closely monitored, a collaboration by 10 California districts to raise achievement under the Common Core math standards. With math proficiency lagging behind English language arts performance on the new academic standards, the project took on one of the biggest impediments to student success and challenges facing California schools.

The findings, laid out in six lengthy studies, are both sobering and encouraging.

Progress was slow and uneven, and average increases in standardized test scores, which have been largely stagnant statewide, were small, with considerable variation among districts and schools. There was an upward trend in 3rd through 6th grades toward the end of the initiative in 2018. And there was some progress among English learners in those districts, compared with English learners statewide, but no closing of the gap between English learners and other students. There was no increase in middle school scores. 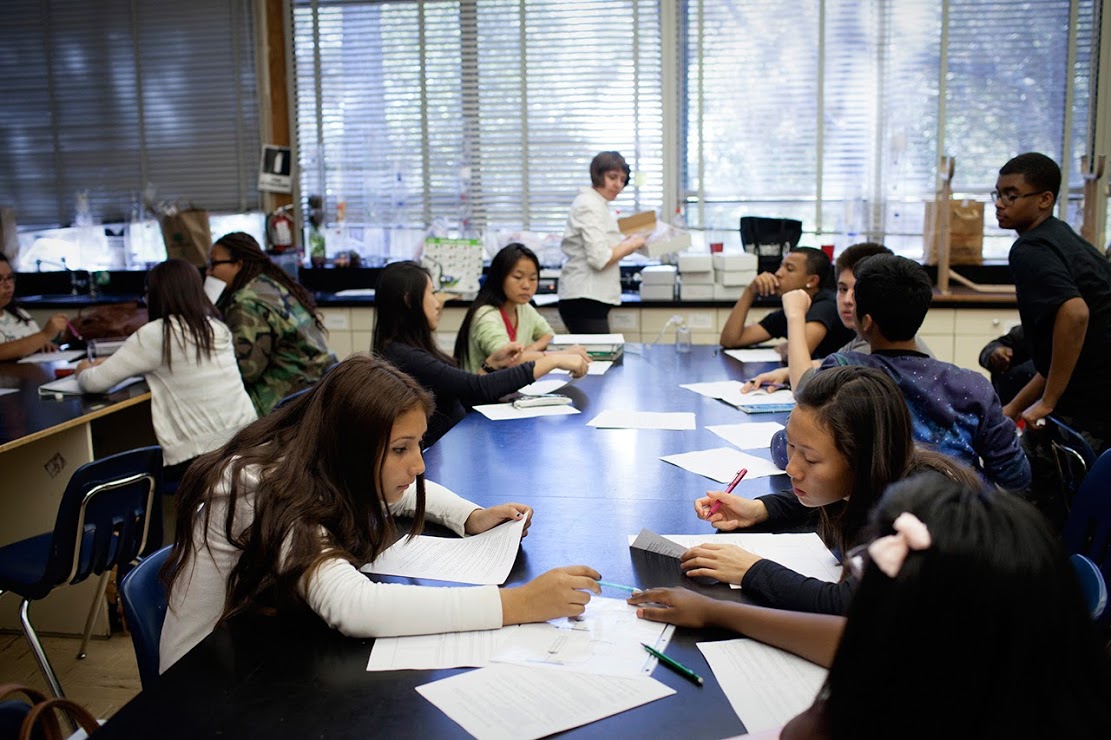 Yet the findings of the reports also offer insights from trial and error and a general consensus, developed over time, on promising strategies and instructional choices to raise the odds of improvement in math.

The overall watchword is patience, said Neal Finkelstein, co-director of the Innovation Studies program at WestEd, the San Francisco-based nonprofit research and policy organization that evaluated and provided technical help for the districts. Math in Common, as the K-8 program was called, produced “not a crazy miracle” but noticeable gain in the latter years, he said. Meaningful improvement in Common Core math will require “long, enduring, grinding progress” that touches “every teacher, every day,” he said. “There is not a shortcut to it.”

The S.D. Bechtel, Jr. Foundation funded Math in Common. The 10 districts were chosen, out of 27 invited to apply, because they had shown some success in raising achievement with some capability and systems to implement the then-new math standards. The unified districts, with an average of 72 percent low-income students, were Dinuba, Elk Grove, Garden Grove, Long Beach, Oakland, Oceanside, Sacramento City, San Francisco, Sanger and Santa Ana.

Bechtel spent more than $50 million on the program. Bechtel paid for periodic meetings of the districtwide teams, additional math specialists, in-school and in-district trainings and the collaboration time of math teachers since 2013. That was when districts were beginning to turn their attention to the significant shifts in instruction and concepts demanded by Common Core math. California Education Partners of San Francisco, which directs education networks throughout the state, oversaw the initiative. Districts received grants ranging from $2.5 million for small districts like Sanger and Dinuba to $7 million for Long Beach over 5 years.

“There was no model for implementing Common Core” when the initiative started, and the foundation was “agnostic” about approaches, said Arron Jiron, Bechtel’s associate program director for education. “We wanted to shine a light on what worked. We wanted districts to figure out how to do it within their own visions and capture what they learned, mistakes and all.”

To read the studies

WestEd began publishing studies of Math in Common in 2014. All of the reports, plus the final evaluations, can be downloaded at the S.D. Bechtel, Jr. Foundation’s Math in Common site. The half-dozen final reports are:

The 5-year effort did not shake the foundation’s or the districts’ faith in the Common Core standards. But there were — and still are — what WestEd called “roadblocks” to effective implementation. There was a shortage of good materials and textbooks on Common Core math, leading teachers to spend immense time creating their own lesson plans. There weren’t teachers in every school with the expertise to improve instruction and districts couldn’t find subs or schedule release time for collaboration. Based on their experiences, some teachers were skeptical of dedicating time to “continuous improvement.”

But over time, districts came up with “routes” around roadblocks. They refined strategies and came to realizations — WestEd calls them “inflection points” — that guided their work and hold promise for other districts and providers of assistance, primarily county offices of education.

Pursue district collaborations; they can make a difference. Districts, like teachers, “can learn more quickly and effectively together than by working in isolation,” the studies concluded. The reports pointed to practices and ideas that districts shared, like Dinuba Unified’s adoption of Garden Gove’s “math huddles” — monthly meetings of all elementary schools’ head math teachers. District teams should include math experts and administrators committed to the effort with the power to make decisions. Collaborations also need time to build trust to encourage candor about successes and failures.

Narrow the focus to a specific area of instruction. That might appear obvious, but it often isn’t. Districts tried to tackle too many math standards at once and the district teams should have shifted their focus sooner from “vision statements” to improvements in instruction. “District staff should not try to tackle every facet — or even most facets — of systems change all at once,” WestEd wrote.

Make mastery of “academic discourse” a district priority. Academic discourse refers to the ability of students to show orally and in writing that they understand what they have learned, by explaining the logic behind their own answers and critiquing the reasoning of others. One of eight fundamental practices of Common Core math, along with the abilities to reason abstractly and apply math logic outside the classroom, the Math in Common districts eventually chose it as their focus.

Academic discourse presents perhaps the biggest Common Core challenge, since it requires that teachers move “away from memorization, drills and rote procedures” toward a “deeper conceptual understanding” of math, Rebecca Perry, senior program associate at WestEd, wrote. It also “ups the ante” for what districts need to do to successfully and equitably implement the standards, particularly with English learners.

Concentrate professional development at the school level. Common Core demands that teachers teach differently, moving from lectures to encouraging student problem-solving. These are new skills best developed through teachers working together in school-based work groups centered on lesson planning, not district-led trainings. These efforts require release time for teachers to meet and a math coach or, if there are not enough coaches to go around, a lead school math teacher. Districts that relied on the strategy of having teachers train other teachers reported poor participation if teachers lack confidence in lead teachers’ expertise. San Francisco created podcasts for tips on lesson plans.

Observe teachers in their classrooms. “We have data on student outcomes, but we still know little about what teachers do in the classroom that influences those outcomes,” WestEd wrote. Direct observation is critical to helping teachers improve. But the factors for learning are hard to analyze and measure. Garden Grove has revised its tool for measuring lesson effectiveness a dozen times. After analyzing 201 lessons in 141 classrooms in nine of the 10 districts in the project, WestEd staff found little improvement in instruction over three years but concluded the rubric it used may have been too complex. Although gathering observation data was difficult and time-intensive, most participating districts felt it should it be “a firm priority“ to understand implementation success, WestEd wrote.

Develop principals’ instructional leadership. Shifting professional development from the district office to schools magnifies the importance of principals’ role as instructional leaders and advocates for math instruction and resources. Principals ideally should participate in classroom observations and teacher trainings. Those who have not been in the classroom for years or have not taught math find these roles difficult. In some districts participating in the initiative, math coaches tutored principals and created separate learning groups for them.

WestEd concluded that Math in Common has provided “many valuable lessons” on how to implement the standards, but Jiron, of Bechtel, and others acknowledge it’s not clear where other school districts will find funding to hire more math specialists in the elementary grades and the expertise to help them shift instructional practices.

Six years ago, then-Gov. Jerry Brown appropriated $1.25 billion for districts to implement the Common Core, with a choice of spending the money on training, materials or technology; districts spent the most on technology. Since then the state has dedicated no one-time money or ongoing funding for professional development, leaving it up to districts, under local control, to decide whether to spend anything on standards implementation.

The 2019-20 state budget does provide $14 million in federal funding to create a 21st Century California School Leadership Academy for principals and administrators, with coaching in academic standards one of the stated purposes. And the Bechtel Foundation is funding work with the organization that serves the county offices of education — the California County Superintendents Educational Services Association — on how to help districts adopt Math in Common findings.

But otherwise, WestEd’s Finkelstein and former State Board of Education President Michael Kirst agreed that districts will have to find money from within their own budgets. They’ll have to ask themselves, “Are there ways to rearrange what you are doing?” said Kirst, who has called the lack of teacher and administrator training a critical unmet need of Common Core adoption.

As for the Math in Common districts, the project ended in 2018, but the foundation agreed to continue some support for two years for eight of the 10 districts. Garden Grove and Long Beach, which were already ahead of the others in implementing the standards and made the biggest gains in test scores, ended their affiliation. But the foundation itself is winding down and going out of business at the end of 2020, leaving districts to replace the funding — if they choose.

WestEd suggested the districts were still only beginning to figure out what they needed to improve classroom instruction. “It is not yet clear whether the initiative’s work has built the kind of capacity and innovation, in the participating districts, that will ultimately result in more promising (test) results down the line,” it wrote.