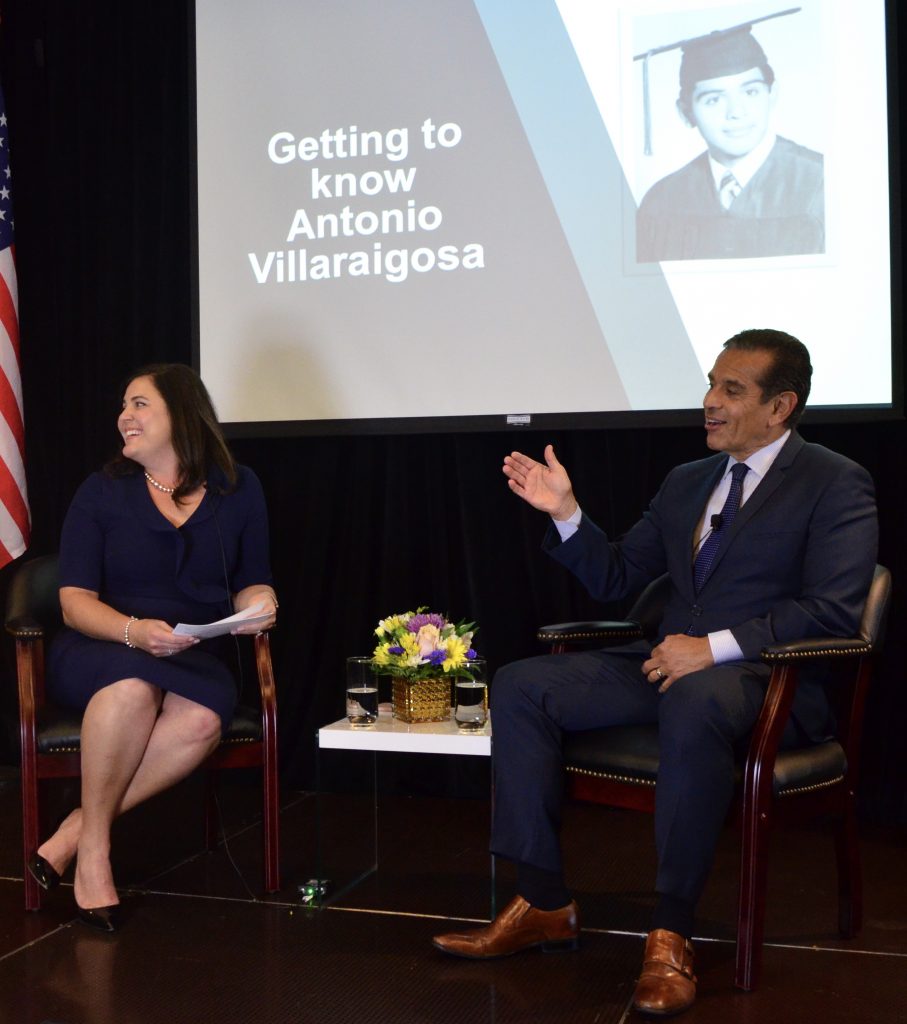 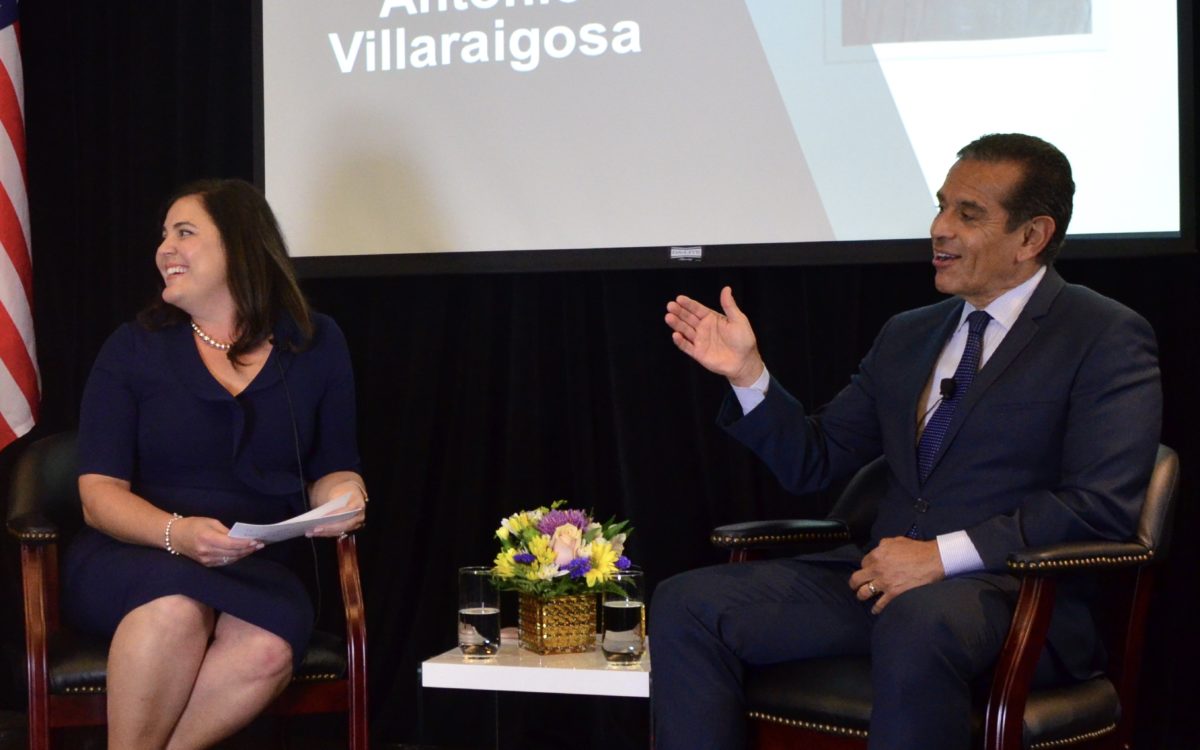 A new Cal State campus in Stockton, a new medical school at UC Merced and a plan giving students a year of free tuition at a state university in exchange for a year of public service were some of the ideas gubernatorial candidate and former Los Angeles mayor Antonio Villaraigosa put forward at a pre-election forum on higher education Tuesday evening.

Villaraigosa, a Democrat who also previously served as state Assembly speaker, said those and his other proposals are intended to expand access and funding so that every student in California has a chance to attend college or learn a skill that would lead to a middle-class job.

“It’s not good for this state to have so many people failing and disproportionately they are poor and of color. That’s not good for us. The goal should be everyone’s kids should have a shot at a better life.  And we’ve got to approach it like the crisis it is,” said Villaraigosa who as mayor tangled with teachers unions in Los Angeles over his plans to take more control over local schools.

He spoke Tuesday at the third such forum sponsored by the Campaign for College Opportunity for top gubernatorial candidates.  It was held at the Los Angeles Times’ headquarters in downtown Los Angeles.

While Lt. Governor Gavin Newsom has held to first place in polls for the June 5 primary in the race to succeed Gov. Jerry Brown, Villaraigosa has been in either second or third place, swapping those positions with Republican activist and businessman John Cox . This week, a new poll by EyeWitness News/Southern California News Group showed 21 percent of respondents supporting Newsom, 18 for Villaraigosa and 15 for Cox. Villaraigosa recently received a big boost with about $9.5 million in contributions from pro-charter school donors to an independent expenditure committee promoting his candidacy.

At Tuesday’s forum, Villaraigosa did did not offer specifics on price tags and funding for a new campus but said that a Cal State in Stockton was needed because not enough young people in that Central Valley region have easy access to a four-year-university and Stockton is the largest city in the state without a public university.  Also, establishing a medical school at UC Merced would help bolster access to medical care in that currently underserved area, he said.

Stockton and Merced boosters long have pushed for such schools but Gov. Jerry Brown and the university systems themselves have not embraced the ideas, fearing that money would be drained from existing campuses and programs.

Villaraigosa also proposed what he labeled a “California Dream Corps,” which he said would allow young people, ages 18 to 25, to work for a stipend at a public service job and then receive funds that would fill in for a year of free tuition and books at a public college or university after other need-based grants are awarded.  He said he hoped the funding could come from cracking down on tax loopholes enjoyed by corporations headquartered in other states but doing substantial business in California. He likened the plan to the California Conservation Corps and AmeriCorps.

“We’ve got to fix financial aid. It’s broken,” he said. And beyond the assistance to students, he said he wants to promote public service. The proposal “is a way of paying it forward and a way to acknowledge we have a common purpose to give back as well.”

Michele Siqueiros, president of the Campaign for College Opportunity, a non-profit higher education advocacy group, was the forum moderator. And in response to one of her questions, Villaraigosa said he would “absolutely” press to expand rules in the state master plan on higher education that limit Cal State eligibility to the top academic third of high school graduates and UC to the top 12.5 percent. “Too many California kids are getting turned away from both the UC and the CSU,” he said.

Later, after the public forum, EdSource asked the former mayor what he thought of UC’s proposal to possibly raise 2018-19 tuition and system wide fees by $342, to $12,972 for California undergraduates if the state does not increase funding significantly.  “An absolute non-starter,” Villaraigosa said of the UC proposal. But he added: “I believe the legislature and the state do have to make more investment in our universities, our UCs, our CSUs, and our community colleges.” (The Cal State system recently dropped its tuition hike plan and froze in-state tuition at $5,742 a year.)

Villaraigosa, who served as Los Angeles mayor from 2005 to 2013 and was in the state Assembly for six years, including two as Speaker, spoke emotionally of his own rocky path to college and his mother’s emphasis on education. He was expelled from a Catholic school and later, after dropping out, graduated from Roosevelt High School with some adult class credits. He found his footing at East Los Angeles College and transferred to UCLA with help from the now-outlawed affirmative action for under-represented minorities.  “Some people say I came in through the back door but one thing’s for sure: I got out the front,” he said of his UCLA degree.

While he worked as an organizer and consultant for teachers unions early in his career, as mayor he clashed with them as he sought to take control over the Los Angeles school district. He lost that fight in court, but helped to establish the Partnership for Los Angeles Schools, an organization that now manages 18 public schools in partnership with Los Angeles Unified, showing some improvements in test scores and graduation rates on previously failing campuses.  (Former Partnership CEO and charter school executive Marshall Tuck is now a candidate for state Superintendent of Public Instruction. The California Charter Schools Association Advocates have endorsed Villaraigosa and Tuck.)

At Tuesday’s event, Siqueiros cited her organization’s recent report that found the majority of tenured faculty and leadership at the state’s higher education systems were white and male, in contrast to the student bodies. She asked Villaraigosa if his appointments to the higher education governing bodies, such as the UC regents, would be “reflective of the diversity of our state.”

Villaraigosa said his mayoral administration was highly diverse and that, if elected, his gubernatorial appointments would be too. “I think that’s healthy for all of us,” he said. “And we shouldn’t be threatened by it.”

Villaraigosa told EdSource Tuesday that he supports tying some state funding for community colleges to student outcomes, a proposal in Gov. Jerry Brown’s budget for next year that’s generating pushback from faculty.

“Some of your funding should be predicated on success,” he said, mentioning student transfer rates, graduation rates and “walking out with a skill” as possible measurements.  But he said he did not have a specific percentage of state funding in mind and would await research by his future staff if elected.

Newsom and state treasurer John Chiang previously participated in the Campaign for College Opportunity’s higher education forums for candidates to succeed Gov. Brown. Cox has been invited but his staff has not selected a date, according to the forums’ sponsor.