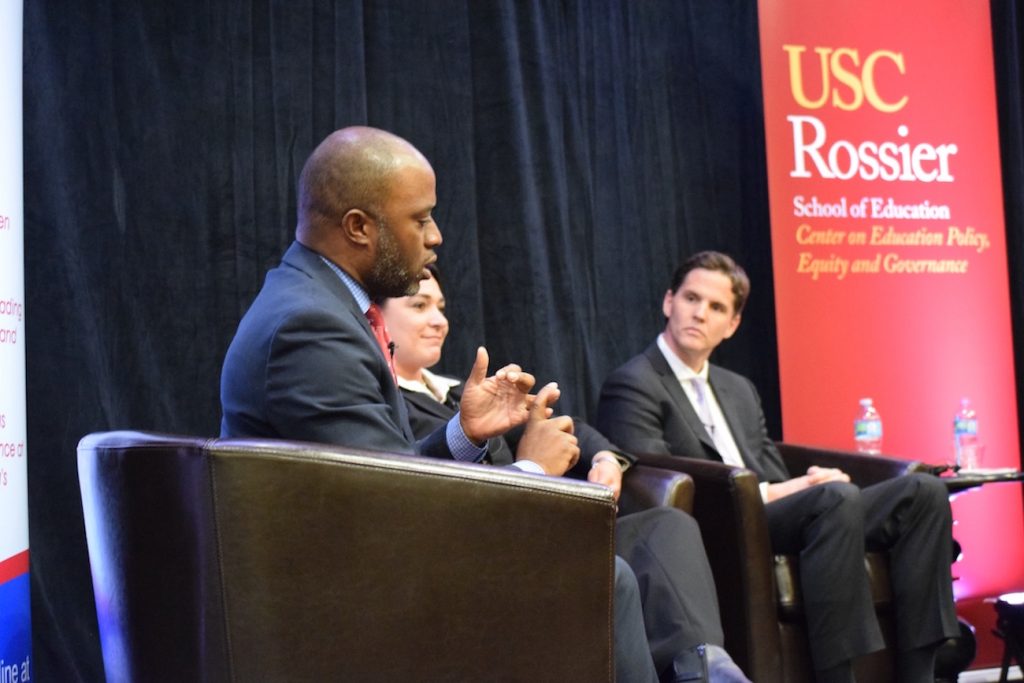 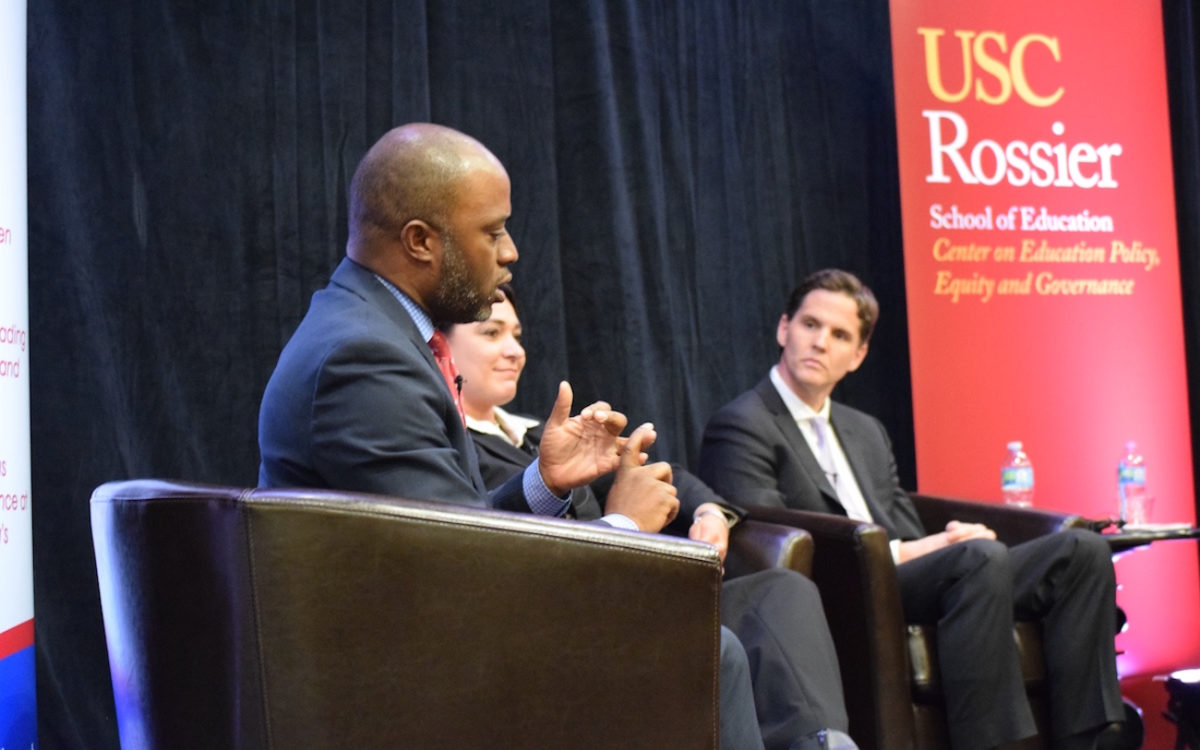 Credit: Ross Brenneman / USC Rossier
Tony Thurmond, left, makes a point at the candidates forum at USC Rossier School of Education. With him are Lily Ploski and Marshall Tuck.

Credit: Ross Brenneman / USC Rossier
Tony Thurmond, left, makes a point at the candidates forum at USC Rossier School of Education. With him are Lily Ploski and Marshall Tuck.

The race for state superintendent for public instruction between the two major candidates, Marshall Tuck and Assemblyman Tony Thurmond, has begun to attract some of the massive contributions from wealthy individuals that characterized the last contest, when Tuck ran unsuccessfully against incumbent Tom Torlakson four years ago.

That race generated huge contributions, mainly through independent expenditure committees, with pro-charter school forces pouring in millions to support Tuck with counter contributions from teachers and other labor unions on behalf of Torlakson.

In fact, the Torlakson-Tuck race in 2014 generated a record shattering $25 million in spending — most of that coming after the June primary election and more than the total spent for the gubernatorial race that year.

In the last few days, the spending race appears to be getting underway again.

As of last week, a political action committee formed by EdVoice, a Sacramento-based political advocacy organization, contributed $2,454,000 to a pro-Tuck independent expenditure committee it established. The committee is titled “Students, Parents and Teachers Supporting Marshall Tuck.” A single contribution of $2 million on April 23 made up the largest share.

An an independent expenditure committee is allowed to promote a candidate but is barred from directly coordinating its activities with the candidate or his or her campaign. There are no limits on how much an organization or individual can contribute to one of these committees, often referred to as an IEC.

In the maze of campaign PACS and IECs, it can be difficult to directly track the flow of a contribution by an individual to a committee working on behalf of a candidate.

Other donors included Jim Walton, the son of Walmart founder Sam Walton, with a $500,000 contribution, his sister Alice Walton, who contributed $600,000, and his daughter Carrie Walton Penner who contributed $100,000. Los Angeles philanthropist Eli Broad also donated $300,000 to the EdVoice PAC that then contributed to the pro-Tuck IEC it established.

In direct contributions since the start of their campaigns, Tuck has raised nearly $2.5 million, compared to Thurmond’s nearly $1.7 million.

As of April 21, after campaign expenditures, Tuck had $1.7 million in direct contributions is campaign coffers to spend, while Thurmond had $1.1. million.

The limit on direct contributions for individuals and political action committees is $7,300.

Lily Ploski, a third candidate in the non-partisan race, did not report any contributions to her campaign.

What does the state superintendent of public instruction do? See this EdSource Quick Guide here.

Thurmond, by contrast, has far fewer contributions from wealthy entrepreneurs, business executives and lawyers. His larger contributions come from a range of unions, such as the International Brotherhood of Electrical Workers, the National Union of Health Workers and local teachers unions from around the state, such the Petaluma Federation of Teachers and the Novato Federation of Teachers.

Both candidates had multiple small donors since the beginning of the year, with Tuck getting just over 300 contributions of $100 or less and Thurmond just under 100 contributions at that level.

In the Torlakson-Tuck race in 2014, most of the $25 million that went to support the candidates came in the form of donations to independent expenditure committees after the June primary. Far less was spent on Gov. Jerry Brown’s re-election campaign that year.

One reason is that it was clear that Brown was going to be easily re-elected in 2014, while the Tuck-Torlakson contest was expected to be a close one. Despite Torlakson having the advantage of incumbency, Tuck almost edged him out, receiving 47.9 percent of the vote compared to the incumbent’s 52.1 percent.

This time around some of the same wealthy charter school backers who backed Tuck four years ago are this year also putting money into committees supporting former Los Angeles Mayor Antonio Villaraigosa.

In the UC Berkeley IGS Poll released last week, Lt. Gov. Gavin Newsom appeared to be far ahead of Villaraigosa.  Villaraigosa was even trailing the two Republicans in the race: businessman John Cox and Assemblyman Travis Allen.

What may determine how much money will flow into the Thurmond-Tuck race is whether one of the two Republicans come in second, ahead of Villaraigosa, in the June 5 primary.

If that happens, Newsom is virtually assured of victory in the November election, because of the lopsided Democratic voter registration in the state. That would make it unnecessary for the CTA to invest significant amounts to elect Newsom, whom they have endorsed. That could free up more funds to back Thurmond.

However, if Villaraigosa comes in second in the June primary and continues to get the kind of support from wealthy backers that he has received in recent weeks, the CTA and other teachers unions will need to ramp up their financial support for Newsom. That in turn could limit how much money they will have to back Thurmond in the superintendent’s race.

While the superintendent of public instruction’s post is symbolically important, the governor is far more important in terms of having a direct impact on schools. The governor affects schools in multiple ways, especially when it comes to making decisions about the state budget, which is the primary source of funding for the state’s public school system.