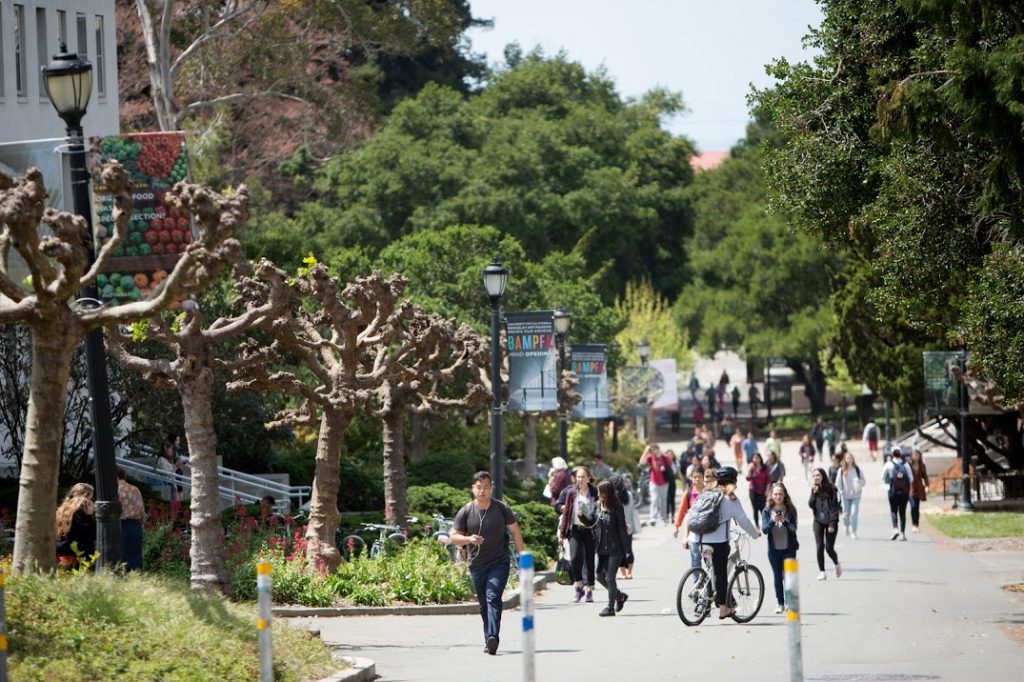 While the California State University system offers community college students guaranteed admission if they take the required classes, the University of California does not. That may soon change.

UC President Janet Napolitano announced Wednesday in a speech at the Commonwealth Club in San Francisco that she is calling for the university system to begin exploring ways that guarantee admission to California’s community college students if they’re academically eligible.

Napolitano said the road to guaranteed admission could begin with the UC system’s 21 Transfer Pathways — recommended courses students can take that make them competitive for entry but fall short of a guarantee. These course pathways are available for 21 popular majors, such as chemistry, English, mathematics and film.

“Successful completion of a pathway, along with obtaining the requisite GPA, should entitle a community college student to a comprehensive review by all UC campuses and a guaranteed place in the UC system,” Napolitano said.

“This would be a major leap for the University of California — one that must be implemented carefully to achieve its desired effect,” Napolitano said.

Napolitano wants the guaranteed transfer arrangement in place by fall 2019.

Before the plan could be implemented, it would need to be approved by the Academic Senate, which sets admissions policy for the university. Depending on its recommendations, the UC Board of Regents may also need to agree to the changes. Community colleges wanting to participate would have to align with UC’s transfer policies.

UC spokesperson Stephanie Beechem said Napolitano’s admissions proposal is just starting to be reviewed, and “nothing is set in stone.”  She said that there will likely be a GPA requirement for the systemwide guarantee.  Other criteria, such as involvement in extracurricular activities, “will be just one of the many pieces that the Academic Senate will examine.”

But each campus has different requirements for each major, such as mandatory community college courses and minimum grades, which often confuse students seeking a UC degree. In the fall of 2016, 4,000 transfer students entered UC campuses through the transfer guarantee program, out of the roughly 18,000 community college students who enrolled systemwide.

“I applaud President Napolitano for her commitment to strengthening the transfer pathway and most importantly pushing for a guarantee,” said Michele Siqueiros, president of the Campaign for College Opportunity, an advocacy group that has championed clearer transfer agreements between the state’s community colleges and its public four-year university systems.

Her organization issued a report last fall that criticized the often-confusing “maze” of transfer rules community college students confront. Among other recommendations, it urged the University of California to create a guaranteed admissions policy for transfer students.

To Siqueiros, the announcement by Napolitano signals “her understanding of how important transfer is, where we send two-thirds of our undergraduate students to community colleges.”

A similar guarantee of admission already exists between the state’s community colleges and the other four-year university system, the California State University. That agreement, called the Associate Degree for Transfer, promises community college students entry into a Cal State campus if they earn an associate degree through the transfer program. Students take two years of courses specifically designed for the transfer agreement and then enter a Cal State campus as juniors — giving them an opportunity to complete their bachelor’s degrees much more quickly  than the typical community college student. In 2016, roughly 38,000 students earned an Associate Degree for Transfer — about one-quarter of all associate degrees in the state’s community college system.

Napolitano’s announcement also proposed allowing students with an Associate Degree for Transfer to receive guaranteed admission into a UC campus if they’re deemed to be as prepared as UC pathways students.

She also announced steps to increase the number of UC students who graduate in four years  from the current 64 percent to 70 percent by 2030.  “I believe we can meet this challenge by expanding access to online education courses, increasing UC’s summer session enrollment, encouraging more students to study abroad and doubling down on our student support services,” she said.

Napolitano also called on the next governor and the state Legislature to work with the university to help plug the state’s looming skills gap. Previous forecasts by the Public Policy Institute of California estimated the state needs an additional 1.1 million bachelor’s degree recipients by 2030 to stay economically competitive.

“It’s incumbent upon us to help more Californians become part of the opportunity story at UC,” Napolitano said.