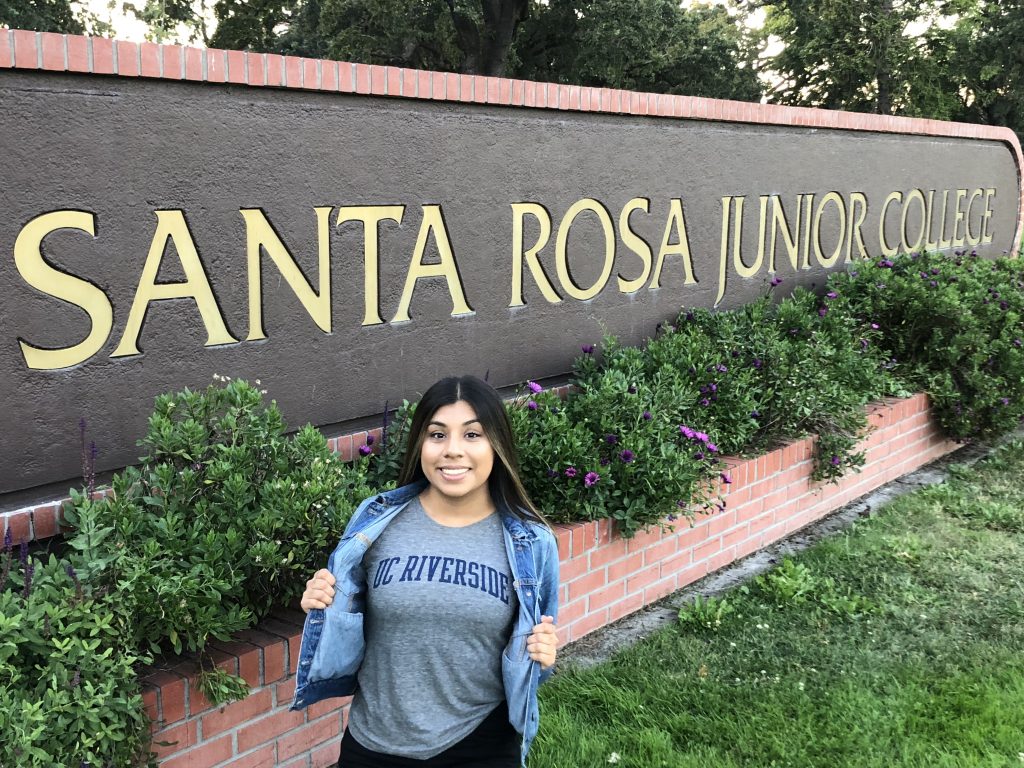 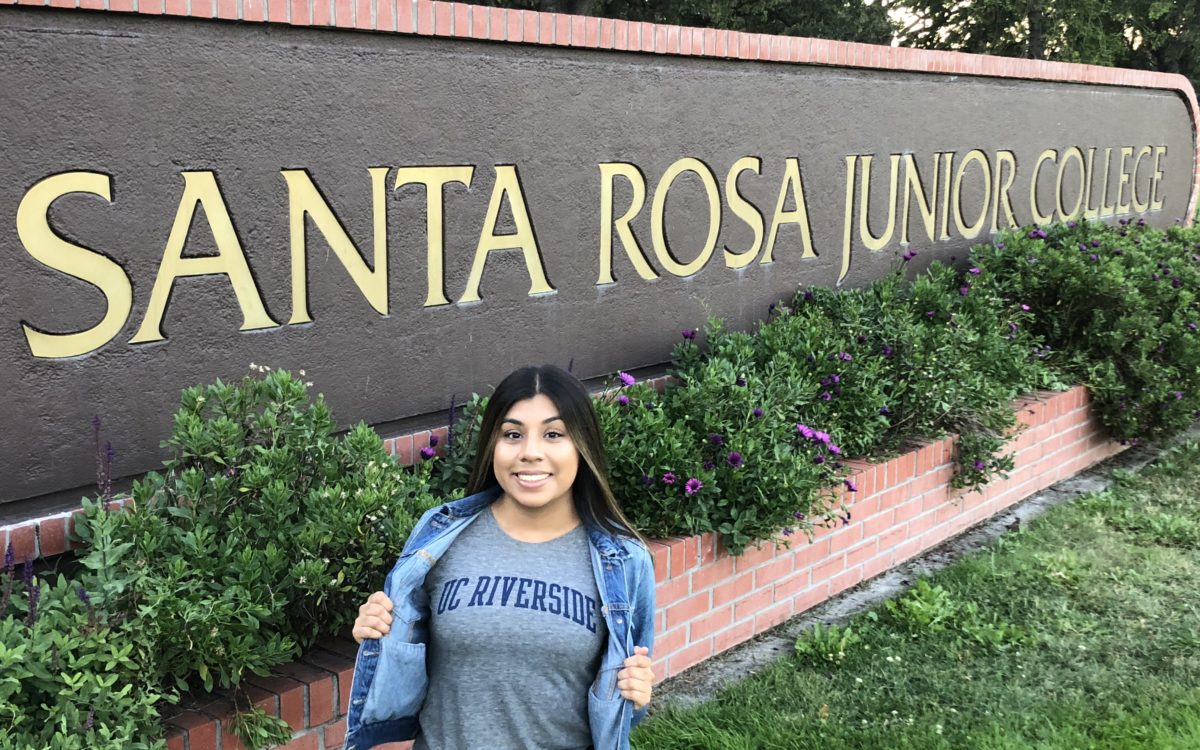 The University of California at Riverside was under the gun this year to enroll more transfer students from community colleges nearby and far away. Alexia Carrillo’s decision to sign up for this fall helped move the university one more step toward success and away from threatened state reprisals.

Located about 60 miles east of Los Angeles, the campus bolstered its recruiting in Northern California, including at Santa Rosa Junior College where Carrillo attended before transferring. It also pushed harder for more transfer students closer to home in Southern California. And it touted the support services it offers all transfers.

Those efforts responded to complaints that UC Riverside and UC Santa Cruz did not meet the statewide mandate that each of UC’s nine undergraduate campuses enroll one new California community college transfer student for every two new freshmen from California. That general goal was set nearly six decades ago but was not always enforced. Then in recent years, legislators and the governor warned of budget cuts if the two UC campuses did not comply and make room for more transfers.

Now, the extra recruiting and counseling at UC’s Riverside and Santa Cruz campuses seem to be working. The results may encourage other four-year colleges and universities to take similar measures to increase their transfer ranks.

UC Riverside offered admission to 1,065 more transfer students for the fall, a nearly 18 percent increase over last year, to a total of 7,070, according to university statistics. Officials expect that about 24 percent of all accepted transfer students will actually enroll (up from 20.2 percent last year).

Among them is Carrillo, who is 21 and from Sonoma in Wine Country north of San Francisco. She said most low-income transfer students like her who are the first in their families to attend college “really don’t think about moving far away from home for college.” In fact, few Santa Rosa students in the past transferred to UC Riverside, which is clear across the state. But Carrillo attended a pre-college summer conference at UC Riverside for potential student leaders and learned about academic, financial and social resources the campus offers to transfers.

That cemented her choice to skip admission offers from two other UC campuses. “I was really looking at where I was going to be supported more, although it is far from home,” the sociology major said.

Admissions director Engelschall said UC Riverside has always “embraced transfer students.” But the statewide pressure to increase their ranks meant the university had to “think creatively and differently about what our plan would be to ensure we had a good pipeline of students.”

Riverside’s admissions staff report that they visited all 114 community colleges in California, double the number in previous years. A recruiter was placed full-time in Sacramento and traveled to community colleges from Ventura to the Oregon border. The university more intensively promoted its services for transfer students, including a study center lounge for them. Campus tours were designed specifically for potential transfers — often older students who, unlike high school seniors, usually don’t take Mom and Dad along for a college visit.

The campus held “celebration” events to give admitted students information about their next steps to begin classes. T-shirts, notebooks and backpacks emblazoned with UC Riverside’s name and logo were given away “to start getting into the school spirit,” said Jessica Verazas, assistant director of transfer recruitment and evaluation.

The two-to-one ratio was set in the seminal 1960 state Master Plan for Higher Education, which established roles and admissions standards for California’s three public higher education systems. The target aims to provide more opportunities for students who might not be academically prepared for UC immediately out of high school and to allow them — and taxpayers — to save money by studying initially at community colleges, where costs are much lower than at the university.

But in the past few years, critics in the legislature and elsewhere said UC had drifted away from the goal.

For much of the past decade, the UC system as a whole hovered between 2.3 and 2.5 freshmen per one transfer and then said it met the two-to-one goal last year. Most individual campuses hit that target, but not Riverside and Santa Cruz. (Merced, the third campus out of compliance, is exempt because it is so new.) Since 2015, agreements with the governor and legislature required UC to make an “aggressive good faith effort” to achieve that ratio at all campuses or face funding cutbacks. Reducing the number of freshmen to achieve that ratio was not an option.

Three years ago, UC Riverside was enrolling 4.4 California freshmen to every one transfer, according to Engelschall. She anticipates that will drop to about 2.25 this upcoming school year once final enrollment numbers are counted, including winter term transfers. Then the school will try to reach 2 to 1 by 2020, she added.

(The UC system does not release fall enrollment figures until later in the term.)

Growth was more modest elsewhere in the state but officials say the impact is cumulative. “I think being visible in northern California this year did catch a lot of students’ attention,” said Yesenia Velazco, the UC Riverside representative at college fairs and workshops throughout northern and central California.

For example, the number of students offered admission from Carrillo’s Santa Rosa Junior College increased from 30 last year to 56; at Sacramento City College from 25 to 42.

Since many community college students in the Riverside area are in the First Generation in their families to attend college, the preparation they need for UC admission can be challenging, Engelschall said. And UC Riverside has suffered a bit from its reputation as a second choice school for students who don’t get into Berkeley, UCLA or San Diego, students concede. Riverside’s warm climate and somewhat sleepy city can be a hard sell if applicants want an oceanfront campus or Big City glamour.

But on the plus side, UC Riverside is among six UC campuses that already offer a pathway to guaranteed admission if a student fulfills certain coursework and gets good enough grades. The UC system as a whole is expanding that to make it easier to transfer starting next year.

Marsha Cazares, president of the UC Riverside Transfer Student Association, said the campus has done a lot already to help transfer students like her succeed academically. But Cazares, 23, who transferred last year from Norco College in Riverside County, said: “I still think there is a lot of work that needs to be done.” More housing should be available for transfer students with children and more financial aid advice should be given to students who transfer mid-year, she said.

John Cornejo is transferring from Sacramento City College to be an ethnic studies and education major at UC Riverside and will be first in his family to attend a four-year university. He too passed up offers from other UCs after making friends and learning about campus services during the summer Puente Leadership program Carrillo also attended at UC Riverside. “It’s really difficult being away from family. So, it helps to have a support system here,” said Cornejo, who is 25.

Figuring out how to navigate a campus so much bigger than his community college will be at first “kind of intimidating,” he said. But knowing so many other transfer students will be around to help each other “is very comforting.”