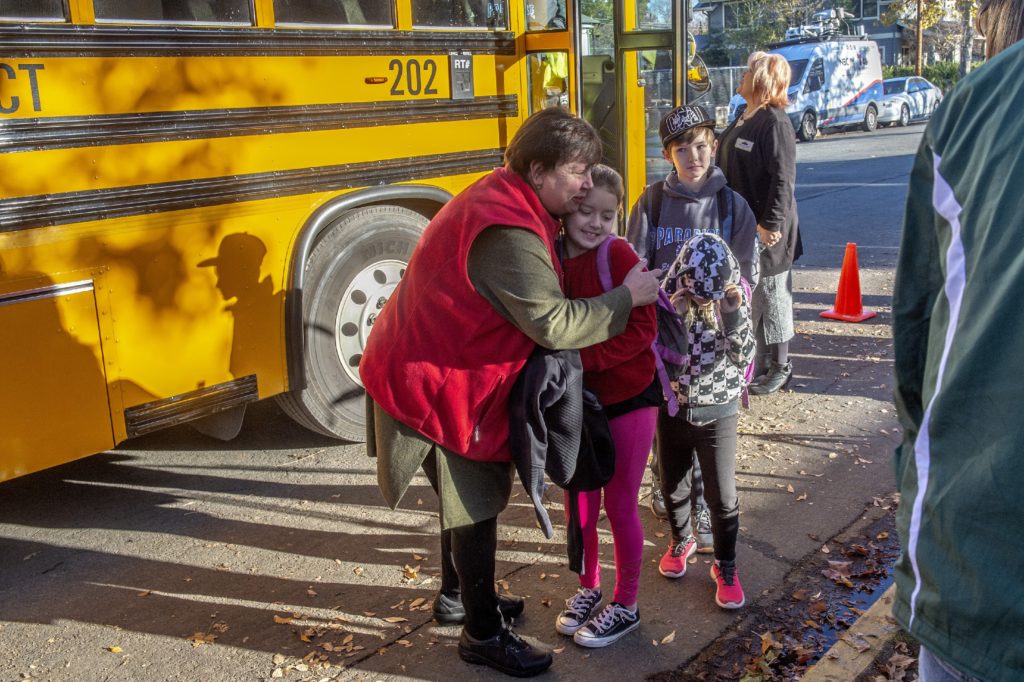 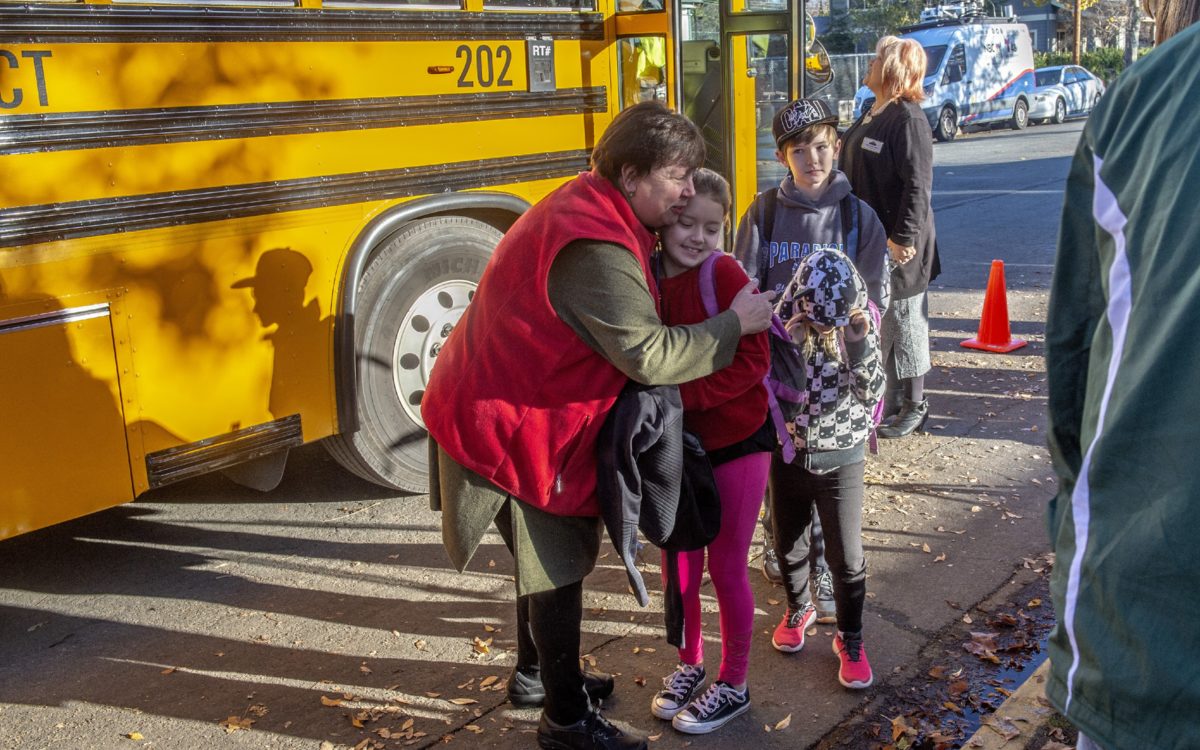 Credit: Renee Byer/Sacramento Bee
Special education teacher Mary Ghaemian welcomes a student off the school bus at the new site for Paradise Elementary School in Oroville on Monday Dec. 2, 2018. It was their first day back in classes since the Camp Fire destroyed their school.

Credit: Renee Byer/Sacramento Bee
Special education teacher Mary Ghaemian welcomes a student off the school bus at the new site for Paradise Elementary School in Oroville on Monday Dec. 2, 2018. It was their first day back in classes since the Camp Fire destroyed their school.

As soon as the bus rolled to a stop in front of Bird Street Elementary in Oroville Monday morning and the driver opened the door, the kids came bursting out. They bounded across the schoolyard and into the open arms of their teachers.

It was a reunion nearly a month in the making — in an unfamiliar place and under the most difficult of circumstances. But all that mattered in the early morning moment was that Paradise Elementary was back together again.

They were torn apart on Nov. 8, when the Camp Fire roared through large swaths of Butte County and decimated the town of Paradise, killing at least 88 people and consuming more than 10,000 buildings, according to Cal Fire. All but one campus in Paradise Unified, along with six charter schools, were either destroyed or damaged in the deadliest wildfire in California history.

Cheers erupted from the assembled crowd at Bird Street as students filed past a throng of media and into what will be their school home for the foreseeable future, a gift from Oroville City Elementary School District. Carolyn Steele was among the teachers who stood near a Paradise Elementary banner tacked on the front office door.

“We are excited and happy to see our kids again,” Steele, an art teacher, who has written a song called “Paradise Strong” that she put on YouTube.

All told in Butte County, more than 4,800 students and 380 teachers and other staff members were left homeless by the fire, according to county officials. While the vast majority were from Paradise Unified schools and the nearby charter schools, 334 students from Chico Unified, Oroville Union High, Durham Unified and Gridley Unified were also displaced.

In the weeks since the fire, officials from Paradise Unified and the Butte County Office of Education, along with charter school operators, have worked tirelessly to find new schools for students and teachers who lost their homes and are now scattered throughout Butte County and beyond.

A top priority all along was reuniting students with the teachers they had before the fire.

“I think it’s awesome that the district was able to do this,” said Lana Bunch, who walked her two kids Jayden, a 5th-grader, and Peyton, a 1st-grader, to the Bird Street site.

“I know for my son that was one of the main things he was worried about was having to start with a new school,” she said. “So, when he heard he could go back to his teacher and his class he was very excited and she was too.”

At latest count, at least 160 students will attend the Bird Street site, while dozens of students filled seven classrooms at Durham Elementary in Durham Unified.

The only K-5 students who will be attending their home school are those from Cedarwood Elementary, the lone school in Paradise Unified that was not seriously damaged in the fire. Cedarwood was at capacity Monday, but that included a mix of students who previously attended the school and those from other schools that were destroyed.

Middle and high school students will be taught via the district’s distance learning program until Dec. 20, when the holiday break starts. Students who don’t have access to a computer will be given a Google Chromebook, officials said. They will also be able to meet weekly with their teachers at drop-in centers that are being set up at the Chico Mall.

As of Monday, officials were finalizing lease negations for a site that will serve as the campus for grades 6-12 beginning in January, when students return from their holiday break.

By Monday afternoon, officials were estimating that about half of Paradise Unified’s 3,500 students were attending one of the elementary schools or had signed up for the distance learning program. And the vast majority of the district’s teachers and staff were back at work.

Also returning to school Monday were students from the five charter schools in and around Paradise that were destroyed in the fire. Classes were convened at Living Hope Fellowship, Life Church and CORE Butte Gymnasium in Chico, according to a California Charter Schools Association news release.

Students from Paradise Unified and the charter schools are covered under the McKinney-Vento Homeless Assistance Act, a 1987 federal law that, among other things, allows students who are homeless to enroll in school without having to show proof of residency or immunization records.

This means that families who lost their homes in the fire are free to send their children to the school that is closest to where they are living, no matter the district or even the state. Hundreds of Paradise Unified students ended up in neighboring districts, including more than 250 at Chico Unified schools, said Jay Marchant, Chico Unified’s director of secondary education.

Torlakson promised that one of his last acts in office would be to shepherd through an executive order signed last week by Gov. Jerry Brown. Among other things, the order includes waivers of state requirements regarding average daily attendance, class sizes and physical education classes. He also took the opportunity to tout a $17 billion statewide bond proposal that he wants to see on the 2020 ballot, saying some of the funding could be used to help restore schools hit by natural disasters.

Thurmond was less specific, but said he would build on the groundwork laid by Torlakson.

“Obviously, once I’m in the position I want to continue to work to get the funding that is needed to help this community to rebuild,” Thurmond said. “The Department of Education has helped to get portables for the temporary buildings and we will be working on a plan for long-term funding to rebuild the schools here.”

Monday also marked the first day back at school for many Southern California students impacted by the Woolsey Fire, which tore through neighborhoods in Los Angeles and Ventura counties in November, killing three people and injuring three firefighters. The blaze scorched 96,949 acres and destroyed 1,500 structures, according to Cal Fire.