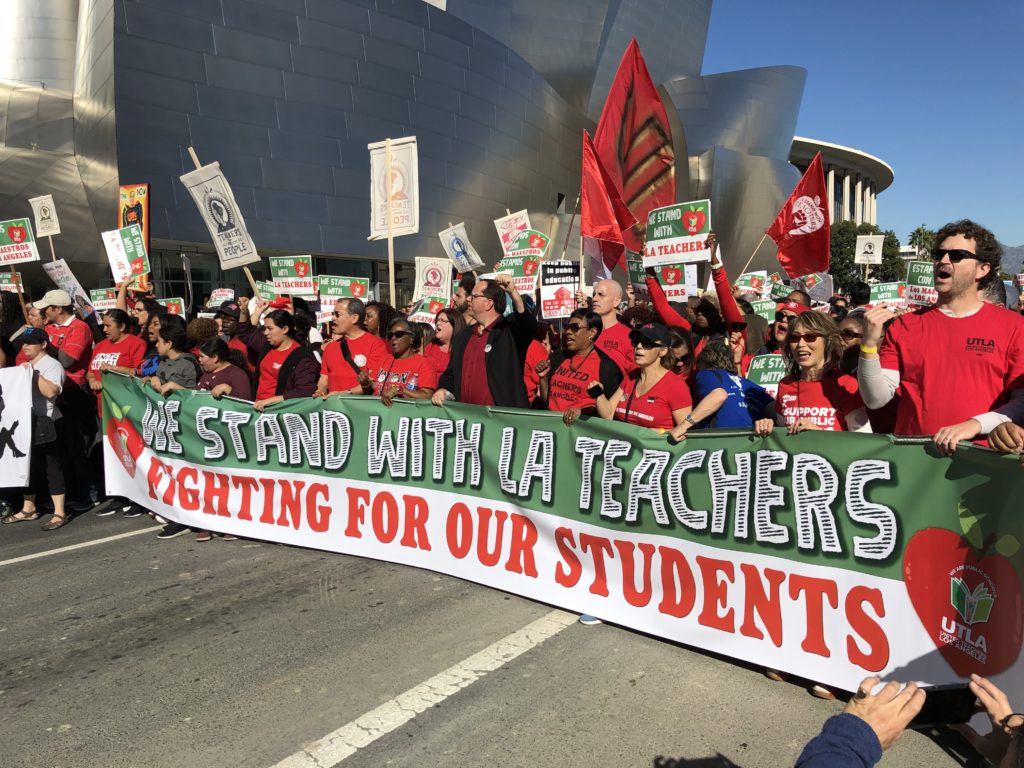 Los Angeles, Oakland and others inch closer to strikes 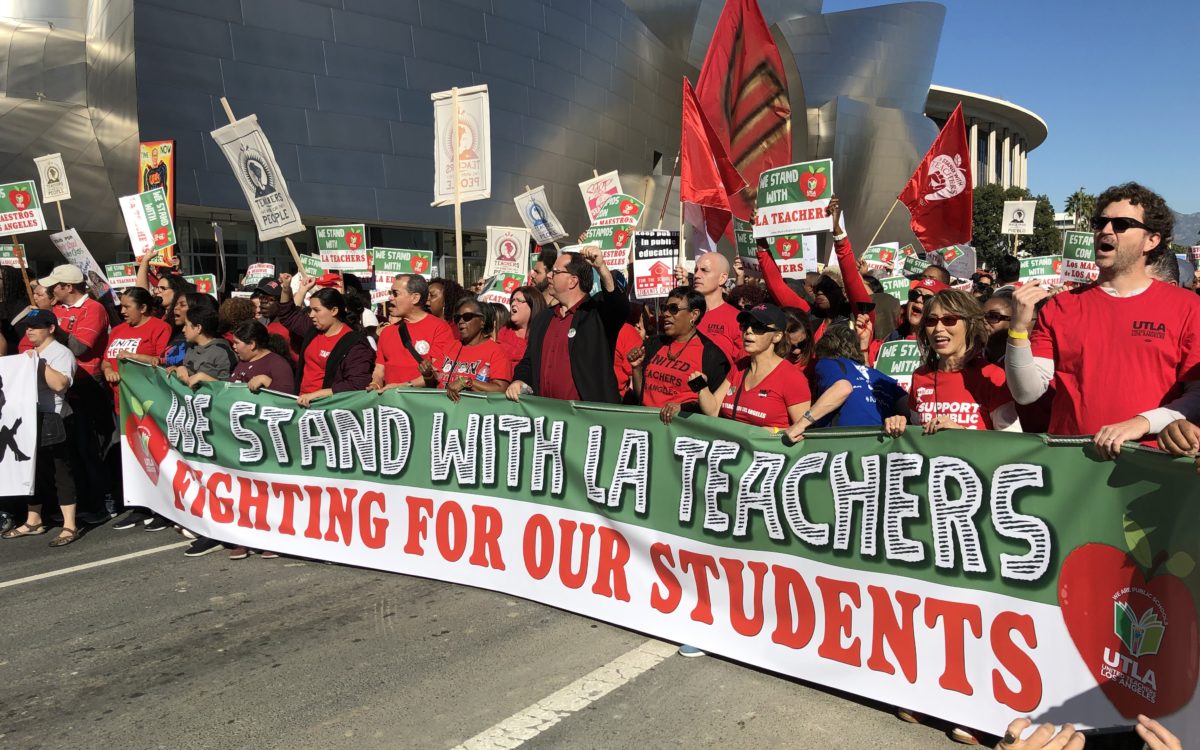 A groundswell of teacher discontent across the nation is spreading to California, energizing teachers unions to demand higher salaries and improved working conditions from school districts, along with more money for public education from the state.

“It’s not a statewide organized campaign like it was in some of the other states,” said Eric Heins, California Teachers Association president. “What you are seeing though is the expression of some of the same frustration teachers in other states have been expressing through the Red for Ed movement.”

Rallies and marches have been seas of red, as teachers donned the traditional color of union solidarity and the symbol of the Red for Ed movement that has swept across many states. The movement has been fueled by an #RedforEd campaign on Twitter and fundraising by the National Education Association to pay for the organizers, signs, food and supplies needed for protests.

Between February and May of this year a red wave of strikes and walkouts rolled through West Virginia, Kentucky, Oklahoma, Colorado, Arizona, North Carolina and parts of Washington State, prompting lawmakers to increase salaries, per-pupil spending and funding for textbooks, technology and infrastructure.

California has not seen the kind of statewide protests that have taken place in other states, in part because teachers have benefited from strong union representation, wages that in general are higher than national averages, along with the strong support of Democrats who have controlled the state Legislature for several decades. But the influence of teacher activism in other states on California appears to be growing.

Thousands of Los Angeles Unified teachers and their supporters, decked out in red, marched through downtown Los Angeles on Dec. 15, demanding a 6 percent pay increase, smaller classes, fewer tests for students and more nurses, librarians and counselors among other things. The union has voted to go on strike on Jan. 10.

Teachers also have donned matching T-shirts — usually red — and protested at school board meetings and at rallies in Oakland, Fremont and Rocklin Unified, as labor negotiations stall and school districts edge closer to strikes.

Heins called the nationwide movement inspirational, especially because it began in predominately Republican-controlled states, where labor unions are generally weaker because employees can’t be compelled to join a union or pay union dues as a condition of employment.

Union leaders in Fremont, Oakland and Rocklin say that they have been motivated by the Red for Ed movement.

“The teachers of Oakland, I would say across the state of California, have been inspired by the teachers of West Virginia, Arizona and Oklahoma because these teachers, working in primarily right-to-work states, red states, took bold action to win gains for students,” said Keith Brown, president of the Oakland Education Association.

Oakland teachers held a protest Dec. 11 to demand higher wages, smaller class sizes and more counselors and nurses, along with other resources. The union and district have been negotiating a contract for more than 18 months and could go on strike as early as mid-January, Brown said.

About half of the school district’s 2,000 teachers showed up for a rally before the school board meeting on Dec. 12 to demand a larger raise than the 0.71 percent they were offered for this school year, Birbeck-Herrera said. Instead, she said, the teachers want to share in the 3.71 percent cost-of-living increase given to the district by the state.

The union expects to be in impasse mediation with the district in January, Birbeck-Herrera said.

Teachers in Rocklin and their supporters held a rally at the Whitney High School Gym on Dec. 19 to demand higher pay, smaller class sizes and increased preparation time for elementary school teachers, Crowe said. They also are asking for a voice in how district money is spent, she said.

The 600 members of the Rocklin Teachers Professional Association want a 12.5 percent pay increase. The district is offering 4.65 percent, according to the union. The option of a strike remains on the table, according to union officials. After 19 months of negotiations the two sides remain at an impasse and will be assigned a neutral fact-finder by the state.

Heins said that teachers aren’t just agitating for higher salaries, they are advocating for smaller class sizes and more funding for classrooms.

Offering these things isn’t always easy for school districts who are struggling to balance budgets while paying rising special education costs and the high cost of funding pensions, according to a report from WestEd, “Silent Recession: Why California School Districts are Underwater Despite Increases in Funding.”

“Political organizing by our collective bargaining partners is a part of the fabric of our system,” said the Association of California School Administrators in a statement. “Educators have myriad reasons for participating in protests, including but not limited to advocating for school safety measures, funding for programs or contract negotiations.”

“ACSA believes that the focus of educators should always be on student needs. We never want to see work stoppages or strikes because of the impact on students but we recognize that there is a place for peaceful protest in this country and honor the rights of free speech for our entire community.”

Both Garcia and Brown said the teachers’ campaigns in Los Angeles and Oakland could become a statewide movement. “Based on the actions of the teachers in the red states, the teachers in California are being energized to take action for their students,” Brown said.

Educators from across the state have been posting pictures of themselves in Red for Ed T-shirts to show support for Los Angeles and Oakland teachers. “I have been getting statements of support from all over California and commitments to do solidarity work,” Brown said. “Teachers are wearing T-shirts and posting on social media. I see a growing statewide movement.”

Despite the potential strikes looming in California, prolonged negotiations don’t generally end in strikes. Both parties are required to jump through a number of hoops that generally include negotiations, mediation and the issuance of a non-binding report from a neutral party before a union can call for a work action.

The state has had 175 strikes, sickouts and other work stoppages since 1975, but fewer than nine in the last 10 years, according to information from the California Teachers Association. Strikes, lockouts and sickouts were much more common between the mid-1970s and mid-1980s when there were often more than a dozen work stoppages in any given year. There were 22 work stoppages in schools in 1979-80, for example.

If Los Angeles teachers go out on strike it would impact more than 621,000 students. The last walkout at the district was in 1989, according to union officials.

“We have watched underfunding and the actions of privatizers undermine our schools for too long,” said UTLA President Alex Caputo-Pearl, in a press release Wednesday. “No more. Our students and families are worth the investment and the civic institution of public education is worth saving.”

There may not be a statewide teachers’ movement in California now, but it has reached the regional level in the Bay Area. The East Bay Coalition for Public Education, made up of representatives of 13 teachers unions, will hold the Rally to Fund Public Education at the Frank Ogawa Plaza in Oakland from noon to 3 p.m. on Jan. 12.

The coalition is asking state lawmakers to revise Proposition 13 so that public education receives additional property tax from commercial property owners, that the state pays a larger share of federally mandated services and that they promote policies that offer educators better salaries and working conditions.

“We need to look at funding from the state that is adequate to sustain education in California,” Birbeck-Herrera said.

Many school boards agree that there is not enough funding for education and are signing resolutions calling for fair and fully funded schools. They are asking that state lawmakers fund schools at the national average or higher by 2020 and that funding is equal or above the top 10 states by 2025.

“This is a beginning of a movement of claiming responsibility for our classrooms and schools,” said Marisol Garcia, the vice president of the Arizona Educators Association and an 8th-grade social science teacher who previously taught at Horace Mann Middle School in San Francisco.

A six-day strike in Arizona in May resulted in a 20 percent raise for teachers over two years, as well as more money for technology, textbooks and support staff, Garcia said.

Garcia said Arizona educators were motivated by other teacher protests and strikes. “I think it traces back to seeing the barrier being broken in West Virginia,” she said. “We saw colleagues that look like us and were living our lives and were struggling with the same things we were struggling with.”

West Virginia teachers were on strike for nearly two weeks in February and March and won a 5 percent pay raise.

Now teachers’ unions nationwide are sharing war stories and offering support to one another, Garcia said. “What is great about this kind of wave is we are learning from one another,” she said.

“I can say for the first time I’m a proud Arizona educator,” Garcia said. “I had a tough time saying that before. That’s because I feel powerful and the people I work with feel powerful. We shut the schools down for six days to fight for our kids.”

Correction: This story has been corrected to reflect that the Fremont Unified teachers union is scheduled to begin impasse mediation with district officials in January.