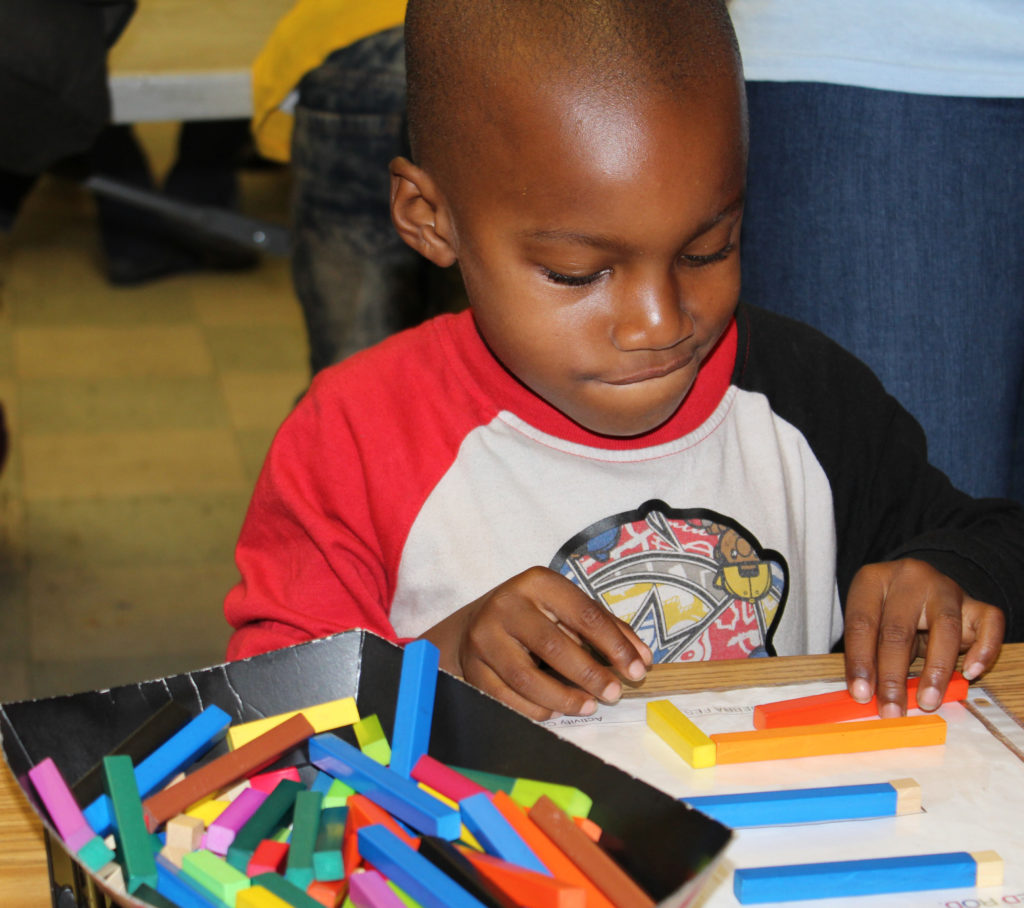 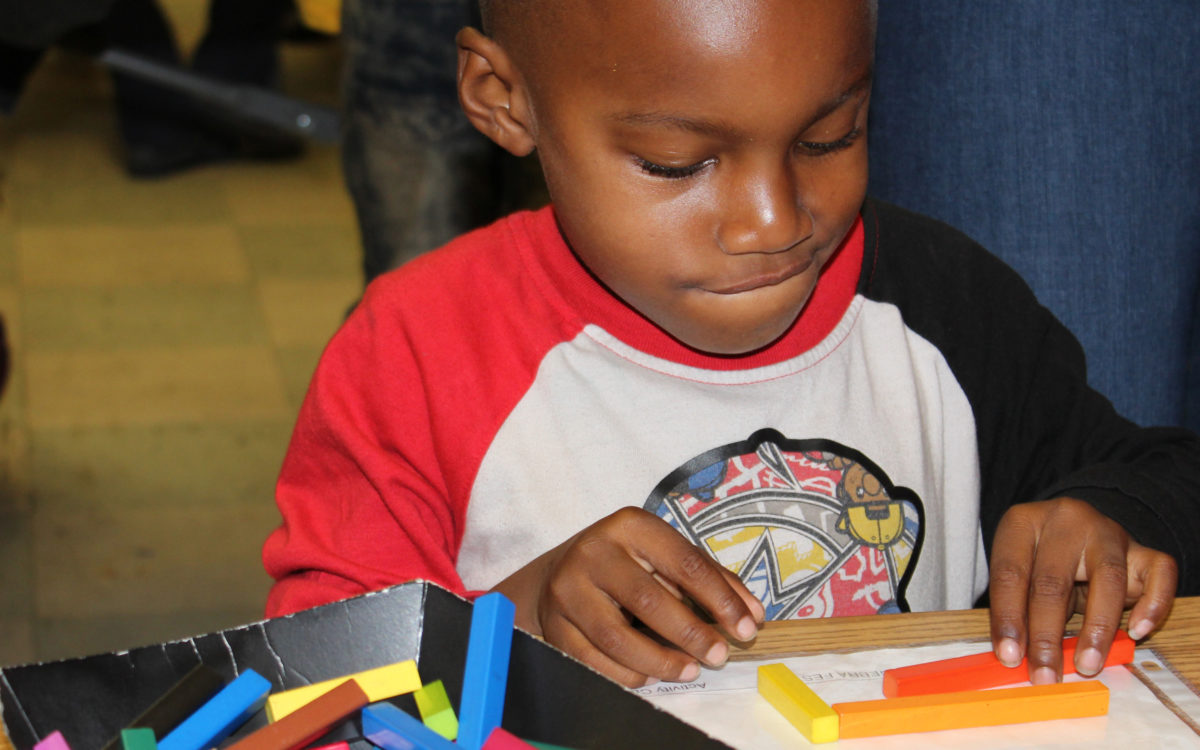 Instilling confidence in math skills from an early age is the mission of a new math program aimed at California preschoolers.

With that in mind, the “Preschool Counts” program enlists undergraduate students to work one-on-one and in pairs with young children to boost their math skills through games and activities.

The program began in 2013 on a pilot basis at Stanford University. Students at UCLA and San Francisco State University are also participating in the program.

One of the objectives of Preschool Counts is to bring math to more preschool classrooms in low-income communities where children may have limited exposure to science, technology, engineering and math, or STEM, programs. The program is, at least in part, a response to studies that have shown developing early math skills contributes to later academic success.

Focusing on promoting learning of math concepts among young children, especially those from low-income families, is one of the reasons UCLA adopted Preschool Counts into its curriculum, said Megan Franke, a professor in UCLA’s Graduate School of Education and director of Preschool Counts at UCLA.

“There are some prevailing narratives about who can do math and not do math and a lot of those (place) young people who live in poverty as not as capable or coming in behind,” Franke said. “And I wanted us to investigate those issues, get into the schools and see what is working and get to know the young people and their teachers.” UCLA students involved in Preschool Counts volunteer once a week at local preschools where the population is predominantly Latino students, she said.

Preschool Counts is what is called a “service-learning program” offered for credit in courses to students at participating universities. The program is offered at no charge to preschools that participate. It is funded by the Dhanam Foundation. Materials used in the program are covered through foundation funding provided to participating colleges and universities.

Researchers have found a strong foundation in math skills at an early age helps students perform well in other subjects later on. For example, a seminal 2007 study by Greg Duncan, a professor of education at UC Irvine, found that early math skills are one of the best predictors of later success in math and reading.

At Stanford, students are required to take a 1½-hour course weekly and commit to teaching early math in preschools for two hours twice a week. Students in the program major in a variety of subjects, including education and public policy, said Renee Scott, director of Preschool Counts at Stanford’s Haas Center.

Scot said the Preschool Counts program is multifaceted. “We have multiple goals but the overall goal is to work to achieve access and equity for all students. That is our guiding light,” she said.

This means that one of the key skills student tutors need to learn is how to adapt math activities to young children at varying stages of learning, she said. Equity means that all children have access to math instruction in a way that helps them to succeed, Scott said. This can be achieved through one-on-one interactions, Scott said, where student volunteers learn the specific needs and learning styles of toddlers.

When Alma Ixchel Flores-Perez began participating in Preschool Counts she was in her freshman year at Stanford. Flores-Perez, now a senior, is a fellow in the program who will work to assist other first-time student tutors in the spring. Flores-Perez said one of the best things about the program is that it includes a lot of reflection about what works and doesn’t work when teaching math to young children.

Through the program, she said she’s learned the importance of keeping lesson plans flexible, she said. “You have to learn to roll with the punches and you really have to be able to adapt if something isn’t working and say, ‘What else can I do?’” Flores-Perez said. “I had to challenge myself to find more interactive ways of teaching,” she said of the experience.

Stanford student Amanda Youngjin Han has worked with the same two preschoolers for two semesters in a row. Of one of her “shy students,” Youngjin Han said, “I got to see her gain more confidence in counting skills. It was really cool to see the effect learning math had on how she behaved. That knowing more gave her the confidence to speak up more.”

Preschool Counts supplements the work teachers are already doing in math, Franke said. “One reason I wanted to bring Preschool Counts to UCLA is because I wanted to be able to find ways to support teachers in L.A. who are trying to think of ways to meet the needs of their students with math,” she said.

Franke said preschool teachers have fewer opportunities than K-12 teachers for professional development, especially by subject area. The program enables student tutors to send pre-planned activities to preschool teachers they are working with that are open for observation, feedback and discussion, she said.

Recognizing the need for teacher support, the 2018-19 state budget includes $11.2 million for an Early Math Initiative to provide coaching and professional development to preschool and elementary teachers in math education.

Students know how to keep young children engaged in learning, Platas said, a skill that is invaluable for those who plan to pursue careers in education. In 2016, Platas’ students worked one-on-one with 330 preschoolers and in 2017, close to 600.

Platas said she wants students to learn that it’s important for all children to have access to high quality education experiences and that math is a subject they can learn at a young age. Children can learn if activities are engaging and they are provided with support, she said.

This story has been updated to correctly state the name of the donor for the Preschool Counts program.