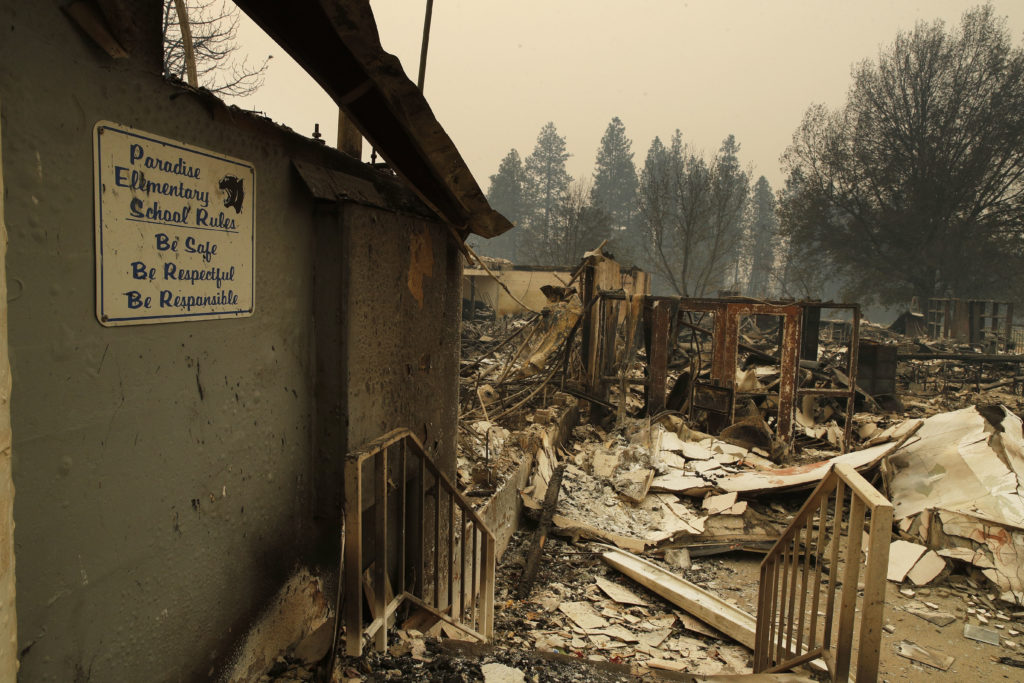 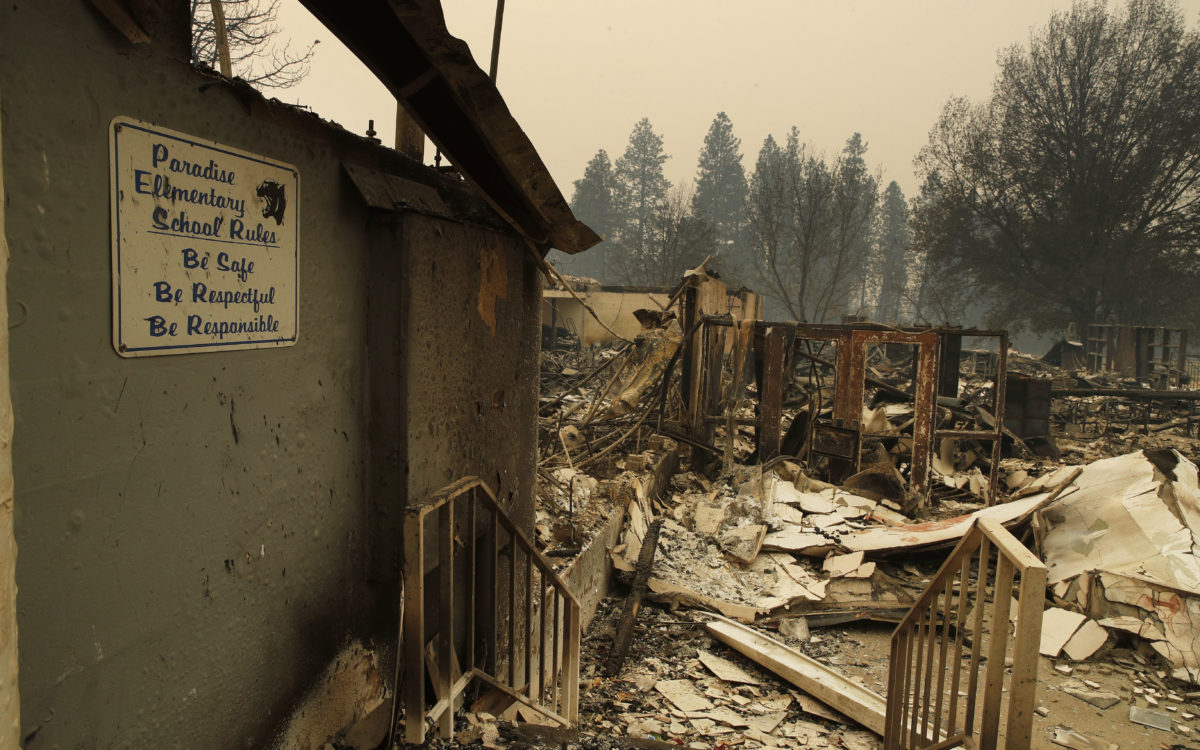 With less than a week to go before their target date to resume classes, officials in the fire-ravaged Paradise Unified School District announced Tuesday they’ve secured three elementary schools that will house K-5 students through the end of the school year, while middle and high school students will be taught via a distance learning program until they return to school after the holiday break.

These arrangements, the result of district officials working through the Thanksgiving weekend, mean elementary students who return to the district on Dec. 3 (Monday) will be reunited with their teachers and classmates, something administrators and teachers have said is a top priority.

“Through everything that we have all been through, the one thing we wanted to make sure we could see through is that our students be reunited with their PUSD teachers,” wrote Paradise Unified Superintendent Michelle John and other officials in a letter to parents posted on the district’s Facebook page. “We assure you that, even through our own trauma, we have been working to keep this promise to you.”

On Nov. 8, the Camp Fire decimated the town of Paradise and neighboring communities, claiming at least 88 lives and consuming more than 10,000 buildings, according to Cal Fire. The wildfire, the deadliest in California history, either destroyed or damaged all nine campuses in Paradise Unified along with six charter schools. The fire is now 100 percent contained, but at latest count more than 200 people were still missing.

Over the past two weeks, Paradise Unified and Butte County officials — with help from neighboring districts and county offices of education — have worked out of makeshift offices in Chico to assess damage to schools, locate students and teachers and find suitable school sites.

They have been in contact with nearly all of the district’s 3,500 students and none have been identified as among those who perished in the fire, nor were any district employees killed. However, officials say they still aren’t sure who will return on Monday, when all Butte County schools are scheduled to re-open.

Tim Taylor, superintendent of the Butte County Office of Education, said that he is expecting Paradise Unified to lose at least a third of its students based on what happened after the October 2017 Tubbs Fire burned in Napa, Sonoma and Lake counties — killing 23 and destroying large swaths of Santa Rosa.

“Housing is tough and people are really traumatized,” Taylor said.

Paradise Unified students are covered under the McKinney-Vento Homeless Assistance Act, a 1987 federal law that, among other things, allows students who are homeless to enroll in school without having to show proof of residency or immunization records. This means that families who lost their homes in the fire are free to send their children to the school that is closest to where they are living, no matter the district or even the state.

For those K-5 students who do come back to Paradise Unified, some will go to Cedarwood Elementary, which is located in the nearby community of Magalia and the only school in Paradise Unified that was not seriously damaged in the fire. Others will go to Durham Elementary, which is about 7 miles south of Chico in Durham Unified; or Bird Street Elementary in Oroville Unified, which is about 27 miles south of Chico.

As of Tuesday, officials were finalizing lease negations for a site that will serve as the campus for grades 6-12 beginning in January, when students return from their holiday break. Extra time was taken to decide on a location because John and other officials wanted to make sure it was the right fit.

“We didn’t want to just place students anywhere. It had to have the look and feel of a good learning environment, or at least have the potential to become one,” said Kindra Britt, a Placer County Office of Education spokeswoman who is assisting Paradise Unified.

Between Monday and Dec. 20, when the holiday break starts, students will access the district’s longstanding distance learning program, which is on a Google cloud platform. Students who don’t have access to a computer will be given a Google Chromebook, officials said. They will also be able to meet weekly with their teachers at drop-in centers that are being set up at the Chico Mall.

Also on Tuesday, representatives from the five charter schools in and around Paradise that were destroyed in the fire announced that charter school students will go back to school on Monday. Classes will be convened at Living Hope Fellowship, Life Church and CORE Butte Gymnasium in Chico, according to a California Charter Schools Association news release.

“Our top priorities are the safety, well-being and education of our students, and one of the most impactful ways we can ensure this is to get our students and teachers back together as soon as possible to begin the healing and rebuilding process,” Casey Taylor, executive director of Achieve Charter Schools of Paradise, said in the release.

Hundreds of Paradise Unified students will end up in neighboring districts. As of Tuesday, 260 had registered at Chico Unified schools, said Jay Marchant, Chico Unified’s director of secondary education.

Paradise students are invited to orientations at their new schools Friday in advance of next week’s re-opening, Marchant said. He added that they will be given backpacks and Chromebooks during the orientation.

Many Southern California students are also returning to school for the first time since the Woolsey Fire ripped through Los Angeles and Ventura Counties earlier this month, killing three people and injuring three firefighters. The blaze burned 96,949 acres, destroying 1,500 structures and damaging 341 others, according to Cal Fire.

Most Santa Monica-Malibu-area schools will reopen next week, although Webster Elementary School in Malibu will reopen its doors to students Wednesday, according to the district website.

More than 300 Paradise Unified teachers and staff gathered Tuesday at the Chico High School gymnasium to check in and receive information about where they will be assigned when classes resume. Hundreds of Paradise Unified employees lost their homes in the fire and the district still does not have an exact count of how many will be able to return to work on Monday.

“It was the first time they were all at the same place at the same time since before the fire,” Britt said. “There were lots of tears and hugs and relief to be together.”

The staff received the first in a series of workshops focusing on healthy ways to cope with the losses they and their students have suffered. They also received training in trauma-informed approaches to teaching and interacting with students. In addition to this training, staff will have the option to meet with mental health experts in small groups over the next few days for counseling on their own situations.

The California Teachers Association, the state’s largest teachers union, is planning to host a “mental health day” in the coming weeks for teachers affected by the Camp Fire, said Cynthia Menzel, a union spokeswoman.

Simultaneous with the events in Butte County Tuesday, the Sacramento County Office of Education launched its “Support Partner Schools” effort, which will team classrooms at Sacramento County Schools with Butte County classrooms to lend material and emotional support. Organizers hope the project will result in assemblies, phone calls, correspondence and visits — both virtual and in person — between the students and teachers from the two districts.

“Students are more successful when they know someone truly cares about them,” said Sarah Koligian, superintendent of Folsom Cordova Unified. “By establishing meaningful ongoing connections with students and educators around our region, the students of Butte County know there are other children and adults alike that will be there for them in the months ahead.”

California Department of Education officials are hoping that on Wednesday Gov. Jerry Brown will sign the first in a series of executive orders aimed at helping schools rebuild and recover from the fires. The order will include waivers of state requirements regarding average daily attendance, class sizes and physical education classes. The executive order will also waive some facilities requirements so classes can be taught in places like churches and shopping malls.

Additionally, state officials are working with the federal government to guarantee FEMA funding for the rebuilding of schools and to ensure that Congress reauthorizes a grant program that provided $14 million to schools following the Tubbs Fire.

“We’re doing everything we can to support the valiant and inspiring work of local leaders to bring healing and recovery to Butte County students, schools and educators as soon as possible,” said Glen Price, chief deputy state superintendent of public instruction.