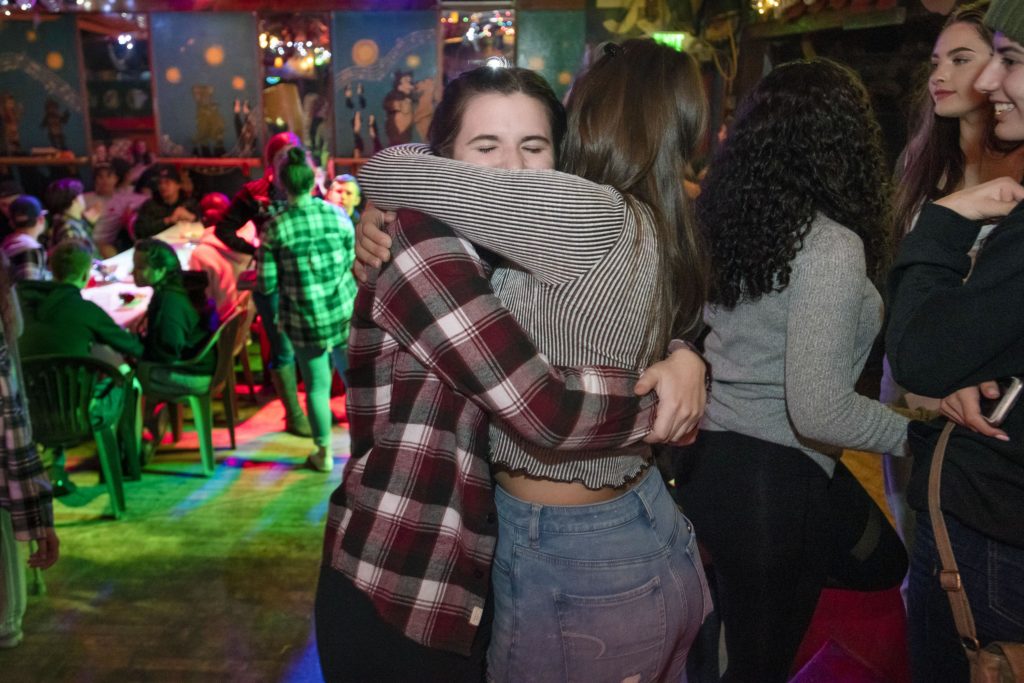 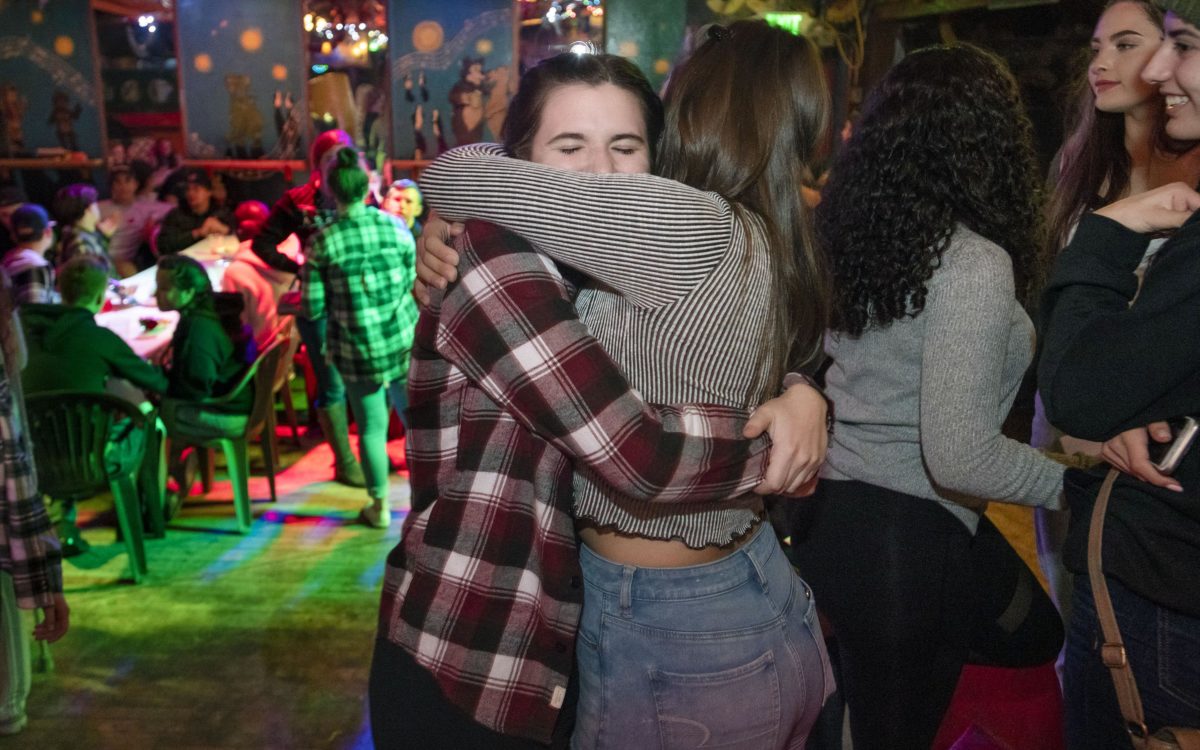 Credit: Randall Benton
Brooke Nonneman 17, left, hugs classmate Carli Wright 17 during an event for the Paradise High Class of 2019 at Madison Bear Garden, a bar and restaurant in Chico on December 10, 2018.

Credit: Randall Benton
Brooke Nonneman 17, left, hugs classmate Carli Wright 17 during an event for the Paradise High Class of 2019 at Madison Bear Garden, a bar and restaurant in Chico on December 10, 2018.

Last weekend Paradise High School seniors were supposed to don ties and shimmering dresses and dance the night away at their Winter Ball. This week would have been Christmas Spirit Week, with activities like an ugly sweater contest and Christmas sock and pajamas days. They would have been enjoying their final year of high school together.

But their lives changed dramatically on Nov. 8 when the Camp Fire roared through the town of Paradise and neighboring communities, destroying everything in its path. The fire burned 153,336 acres, killed 86 people and destroyed 13,972 homes, according to Cal Fire.

Four of the nine campuses in the Paradise Unified School District were destroyed and two were severely damaged, said Michelle John, superintendent of the district. Although Paradise High School was one of the schools that was spared, students can’t occupy it now because of the danger of falling trees and other hazards in the area, she said.

Senior Class President Garrett Malcolm, like many of his classmates, narrowly escaped the inferno. He was forced to leave his pickup truck in a parking lot, grab his dog and make a run for it when the flames cut him off as he was trying to escape the fire.

He ran down Skyway, the road that leads in and out of Paradise, and through a cemetery and a school yard to reach his mother, who was parked in the Ace Hardware parking lot waiting for him. After about six hours and several detours to avoid the roaring flames, the family — and another teen they picked up along the way — made it to safety.

Malcolm, 17, returned a week later to find his truck unscathed, but both his parents’ homes gone. He is living in an apartment in Chico.

“Our class is resilient in the way we all, or at least most of us, have done our best to stay in the area and stay together,” Malcolm said. “A lot of us have come out of this with really bad experiences and heartbreaking times and everything. I know for a fact that everyone I talked to is making it through and staying strong.”

Last Monday Malcolm and about 70 members of the Class of 2019 gathered at the Madison Bear Garden restaurant in Chico to eat burgers and macaroni salad donated by a benefactor and to dance, hug and try to salvage what they could of their senior year.

Danielle Wagner, 17, drove the 98 miles from Davis to be with her friends that night. She moved with her mother because they couldn’t find housing in the Chico area. Both her mother’s and father’s homes in Paradise were destroyed in the fire.

Wagner says she will earn a diploma from Davis High School in May, but she wants to graduate with her Paradise High School class. “I’m always going to know I’m a Bobcat,” she said.

Paradise High students spoke fondly about their town of fewer than 27,000 people, their school and their classmates and the difficulty of being separated from all they have known.

“It’s really hard to be out of our habitat, our home,” said Mackenzie Anderson, 17, the school co-president. “We are small town folk. Most of us don’t really travel a lot. We kind of just stay in the area. Chico is bigger, definitely bigger. … I miss my town with all its trees and its little shops. It (Chico) is not simple and I like simple.”

The students particularly miss home football games, where they sat in “the den” — a section of bleachers reserved for students that they would decorate in school colors or with a theme.

The varsity football team had made the playoffs when the season was abruptly cut short by the Camp Fire. They were scheduled to play Red Bluff High School the day after they fled their homes. The Red Bluff team offered to forfeit, John said. The Bobcats refused to take the offer and forfeited themselves.

The fire hasn’t kept the school’s other teams from playing. The district has rented space throughout the area for every sport from wrestling to basketball, John said.

Paradise High students restarted their education at the beginning of the month, taking online classes and checking in with their teachers at the Chico Mall. The associated student body has hosted activities like movie and game nights at various schools around Chico each Tuesday night to keep them connected. A Go Fund Me page has collected $8,130.

On Jan. 7 the high school students who have remained in the area will have a new school at a former Facebook site by the Chico Municipal Airport. District officials expect about 700 of the high school’s 1,000 students to attend school at the new site. It’s likely the rest of the students have moved away. John said the day will start with a rally celebrating the reunion of students and staff.

Senior Julionna Keers, 17, said school won’t be the same because so many of her classmates have moved away. “Some of my closest friends I’ve been with since freshman year are gone now,” she said.

Last week seniors at the Chico gathering talked about hopes for a prom, a senior trip and the Winter Ball, but mostly they talked about walking across Om Wraith Field at their high school to receive their diplomas.

John said the field is in perfect shape but that burned trees around the school are hazardous and must be removed. Homes and a church near the high school were burned down in the fire and she’d like to see the debris removed, so students are not further traumatized during graduation.

“I have spoken to the police chief and I am doing everything in my power to get them down to Om Wraith Field,” John said.

Community organizations, businesses and individuals from throughout the state have lined up to ensure the senior class has a prom, senior trip and all the other important milestones of a senior year in high school.

The students of Pleasant Grove High School in Elk Grove are fundraising to pay for the school’s Winter Ball, which Martin says will be held in Chico in February. Keller Williams Realty of Fresno started the Paradise Prom Project to raise money for a prom. Six Flags Discovery Kingdom in Vallejo will host the senior trip. A community organization from the Danville area will pay for a Safe and Sober Grad Night for the senior class.

“It has been one light in this otherwise absolutely horrific tragedy,” Martin said. “It has been overwhelming. It really warms your heart.”

Martin, who also is the yearbook adviser, is hoping to raise enough money to give high school students free yearbooks this year and to possibly replace the ones they lost in the fire. A Go Fund Me page has collected $680 so far.

John expects most of the seniors from Paradise High School to graduate, unless they weren’t academically on track to graduate before the fire.

The high school’s Advanced Placement students have been meeting at Chico State and College Connection students, who complete their graduation requirements online while attending college classes, have been attending Butte College. The rest of the students have been finishing up senior projects and finals online, John said.

Students who take the rest of the semester off will be able to make up credits through independent study, she said.

Senior Kelsi Rice, 17, is still worried. She lost presentations and reports that were on her laptop when her house burned down. Some teachers have told her they still expect the work completed. She also is concerned about the time she lost in Advanced Placement classes over the three weeks schools were closed.

“You cannot miss a day of your time schedule to be prepared to take an AP test and missing those three weeks, that’s a lot to make up,” she said.

Keers is among the students who say their college plans have changed since the fire. She had planned to apply to multiple universities, but now has opted to stay close to home.

“I don’t think I will be capable of moving away from my mom next year, “ Keers said. “I still have nightmares about it. I think if I wasn’t close enough to drive up to the house quickly I wouldn’t be happy. I want to be happy when I go to college.”