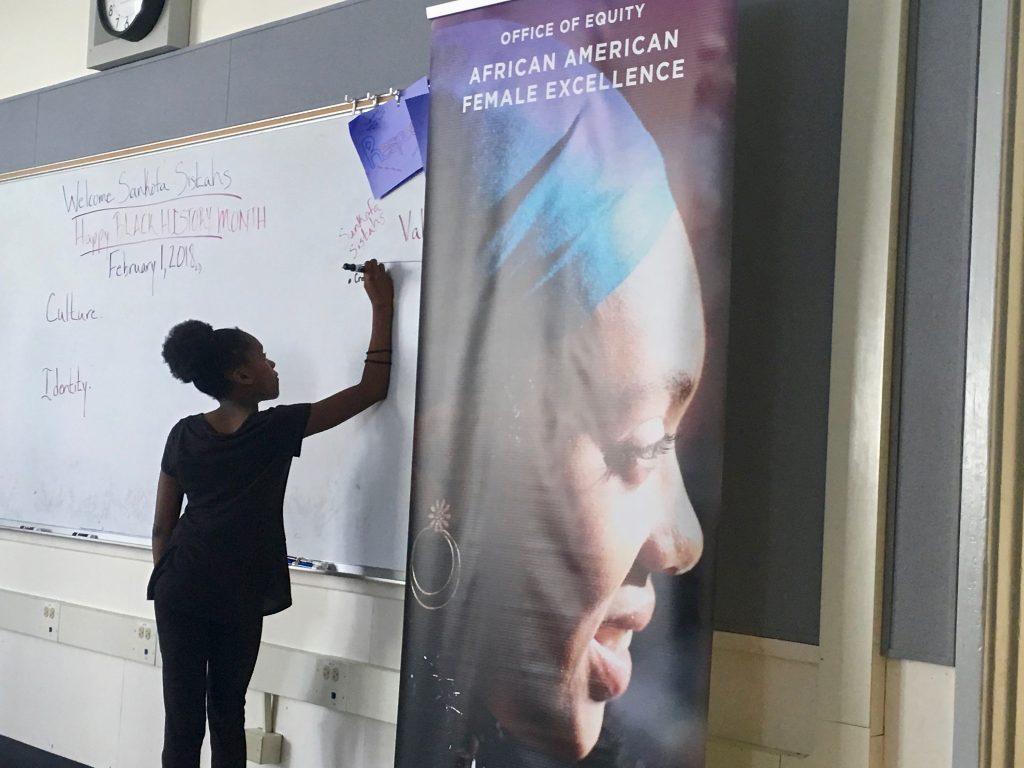 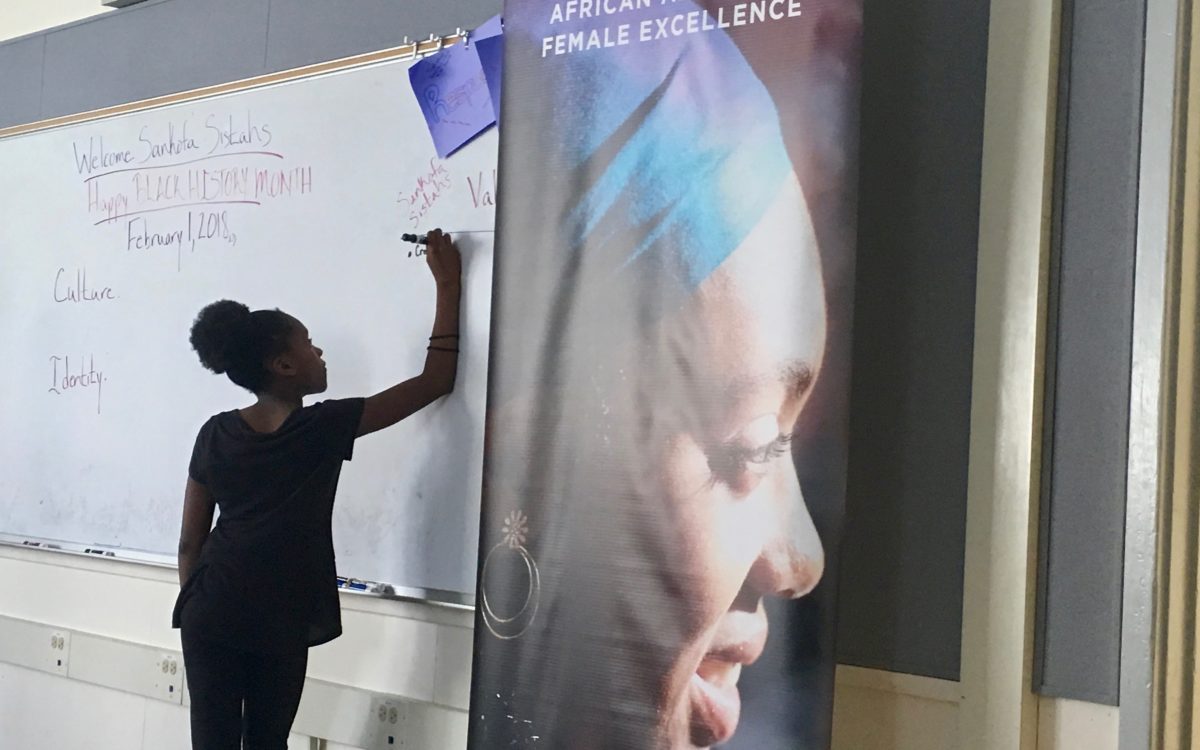 Ever since the Oakland Unified School District launched its African-American Male Achievement office eight years ago people have been asking, “What about the girls?”

Among them were community leaders like Nzingha Dugas, who under contract to the district for many years ran academic enrichment programs and a basketball league that she says kept more than a few girls out of trouble — and in some cases out of the grasp of sex traffickers.

More recently, 12-year-old Jordan Smith joined the chorus in calling for a district program that focused just on girls.

“I didn’t think it was fair, or that it was even possible for us to have our own group,” said Jordan, a 6th-grader at West Oakland Middle School.

Her doubts were misplaced. In January, Jordan and a dozen other girls signed up for the inaugural leadership class of the African-American Female Excellence initiative, headed by Dugas and run, along with the boys’ program, out of the district’s expanded Office of Equity. Like the boys’ initiative, the goal is to boost cultural pride and academic performance, lower suspension and dropout rates and create greater understanding of the students’ singular experiences and needs.

Dugas hopes to expand programming — including for-credit courses on cultural heritage, history and literature — to as many elementary, middle and high schools as possible to give girls safe places to bond, develop positive racial identity and become more engaged at school.

Jordan and the other middle school girls have crafted their list of values — be a proud African-American woman, respect and “no put downs” among them — and penned chants to match. They chose the name Sankofa Sistahs for their group from a saying in the Twi language of Ghana that by some accounts translates literally as, “it is not taboo to fetch what is at risk of being left behind.”

“At risk of being left behind” could by many indicators describe the status of African-American girls.

Though black boys on average experience the highest suspension and dropout rates compared to other student racial and ethnic subgroups and score lowest on academic achievement measures, the focus on their needs has eclipsed another reality: many black girls are in crisis, too. According to the most recent nationwide data, from 2013-14, they are seven times more likely than white girls to be suspended from school. Recent reports show they often feel misunderstood and targeted by teachers and experience sexual harassment and bullying that goes unpunished. Underlying those experiences: African-American girls, a recent survey by the Georgetown Law Center on Poverty and Inequality found, are viewed as more aggressive, adult and sexualized than white girls.

Listen here to Oakland high school girls share their stories of sexual harassment and unwanted touching at school. The radio piece was reported in a partnership with Crosscurrents, KALW Public Radio’s news magazine.

Programs tailored to black girls are beginning to emerge across the country. And recent studies from Seattle’s University of Washington and Washington University in St. Louis found that cultivating strong racial identity and pride contributed to greater confidence and academic engagement among African-American girls. But Oakland Unified’s initiative appears to be the first that is district-led, with plans — at least on paper — to harness the input of girls to change the broader culture and climate of schools districtwide.

Christopher Chatmon, architect of Oakland Unified’s black boys’ initiative and now the district’s deputy chief of equity, said he “laser locked” on African-American males because of the data on student performance. Tackling the underlying conditions that were pushing them out of school, the thinking went, would bring about improvements for all students. But by the fifth year of the boys’ program, Chatmon said, “issues of safety, of identity, caused us to say, now is the time to initiate African-American Female Excellence.”

Those issues came to light in a report by the Oakland-based Alliance for Girls on the district’s girls of color that found black girls had “uniquely negative experiences.” They were least likely of all girls of color to report caring relationships with teachers and complained of being misjudged as disruptive and punished disproportionately for violating dress codes or reacting to sexual name-calling and touching, most often by other students.

Though one-third of district girls are African-American, the report found two out of three black girls are suspended. Among all girls, they are most likely to be chronically absent and least likely to graduate.

Dugas, the former director of UC Berkeley’s African-American Student Development Office, came to the district in 2016 after it launched the girls initiative with funding from an anonymous donor. She spent her first year watching and listening — to girls, educators, caregivers and community leaders.

Due to leadership turnover, she is now working for her third superintendent and navigating a budget crisis that could once again push the district into state receivership. With a skeletal staff, she is pushing to grow the program with money from foundations and individual donors.

Researchers found black girls at Oakland Unified were least likely of all girls of color to report caring relationships with teachers and complained of being misjudged as disruptive and punished disproportionately for violating dress codes or reacting to sexual name-calling and touching, most often by other students.

Last fall, the initiative hosted a “Black Girl Power” conference that drew over 200 girls to workshops as varied as academic mentoring and teen sex trafficking.

On a recent Thursday, the Sankofa Sistahs met midday, using a portion of their lunch hour and part of a class period. They filed into the classroom after greeting each other with a secret handshake. Snacking on seaweed and carrots, they worked on dance moves to accompany their chants. West African language and traditions are woven throughout the class by their teacher, Sistah Iminah Ahmad, who, before working for Dugas, led the Alliance for Girls study and helped craft a sweeping overhaul of the district’s sexual harassment policy — now in its early implementation stages.

Meanwhile, a curriculum committee is developing coursework that feels relevant to the lives of African-American girls, with an emphasis on reading and math.

And word is spreading. On a January evening, more than two dozen high school girls showed up at a student-led youth forum hosted by African-American Female Excellence at a West Oakland community center. They mingled, dining on a catered meal of jerk chicken, plantains and cornbread muffins before the door closed and the real talk started.

The theme was mental health and healing but as the girls opened up, stories of disaffection and frustration poured out. They spoke of being treated by teachers and staff as rough-edged or, in their words, “ghetto,” when they call out to friends in the hallways, and of feeling unprotected by grown-ups who do nothing to stop name-calling and sexual harassment by other students.

Shabazz is fortunate. McClymonds offers several programs for black girls that help her feel supported. But she said the broader initiative is badly needed because, in general, African-American boys and girls “are suspended for everything. We’re targeted for everything.”

Though her own suspension file is thick, Shabazz, 17, who runs track and participates in student government, has turned things around, earning a 3.38 GPA last semester. The forum “was beautiful,” she said. “That was, like, a safe place and we usually don’t get that. A lot of times with black girls there’s a lot of beef, arguing and fighting.”

Dugas and her team recently offered support to the women who run McClymonds’ programs and talked about ways to avoid burnout. And Dugas said she’s had “deep conversations” with teachers across the district about “why they don’t step in” when they see black girls harassed by peers.

“It becomes a cultural thing of, ‘That’s the way boys are,’” Dugas said. “Or, ‘I’m afraid.’ Or, ‘We can’t punish kids like we used to.’” Either the behavior goes unpunished or escalates quickly to suspension, she added. She hopes instead to help engage and teach students about the harm they are causing.

The district’s initiative focusing on boys has been replicated across the country and appears to be showing results. Graduation rates for black boys across the district have risen from 42 percent to 57 percent since the Manhood Development Program course began in 2010 and grade point averages are 25 percent higher for program participants than for black male students who did not participate. Participants also saw a 4.1 percent drop in suspensions over the past three years, Chatmon said, compared to a 1.7 percent drop for African-American boys who were not in the program.

But there has been pushback against the Office of Equity for what educators, including UCLA education professor Pedro Noguera, view as a siloed approach to the needs of a diverse student body. After launching African-American Female Excellence, the office rolled out another initiative for Latino and Latina students and one for Asian Pacific Islanders.

Noguera, an expert on race and equity, said he initially doubted the viability of the boys’ initiative, but now credits Chatmon for doing “an exceptional job with relatively few resources.”

Still, Oakland Unified should avoid the appearance “of prioritizing or favoring some students over others,” he said. He prefers a “systemwide approach” to the needs of all vulnerable student groups — including homeless and foster youth — that can be followed with targeted strategies.

Dugas counters that if her initiative succeeds, it will bring about district transformation that will improve school climate for all students. At that point, a focus on individual student groups will no longer be necessary, “but we’re not there yet.”

Tidying up after the youth forum, Dugas said her spirit was buoyed by the power and honesty of the girls’ voices. She and other educators and advocates spend so much time at meetings talking amongst themselves, she said, that they don’t make enough time to simply listen to the girls. “And then,” she said, “years down the line when the outcomes are not good for kids and you wonder why, it’s because you missed this. You missed this.”