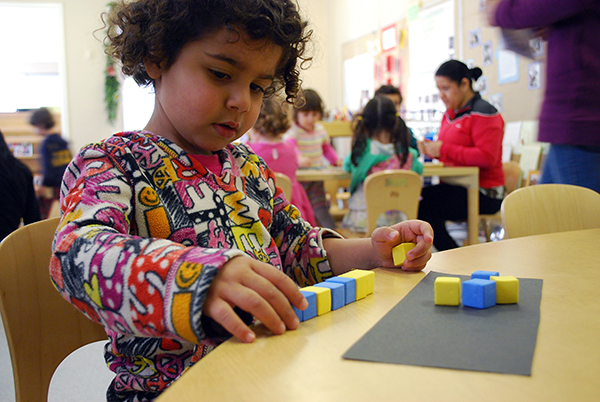 California has increased the number of 3-year-olds enrolled in state-funded preschool programs over the last 10 years, but needs to improve preschool quality, including teacher qualifications, professional development and class size.

Those are among the findings in The State of Preschool 2017 report, by the National Institute for Early Education Research at Rutgers University. The report, released last month, tracks program quality, state spending and enrollment in preschool programs. It also includes a companion report titled “Supporting Dual Language Learners in State-Funded Preschool,” which assesses how states address the needs of preschoolers whose parents speak both English and another language at home.

In 2002, when researchers began doing a state-by-state analysis, only three states and the District of Columbia enrolled more than one-third of their 4-year-olds in state-funded preschool. Now 16 states, including California, do so. However enrollment of 3-year-olds in publicly funded programs nationwide increased from less than 3 percent in 2002 to only 5 percent in 2017 and there are still too few programs for 3-year-olds and 4-year-olds meeting standards for high quality, the report states.

In the report, California ranked 8th in the nation for enrollment, with 10.9 percent of 3-year-olds enrolled in state-funded preschool programs. It ranked 14th for the number of 4-year-olds enrolled, at 36.6 percent. Among the states serving the largest number of preschoolers, California, New York and Texas rank among the lowest for meeting quality standards, said Steven Barnett, co-director of the National Institute for Early Education Research.

California’s cumulative quality rating in the report is 4.3 out of 10. The checklist includes markers such as guidance in selecting and implementing curriculum, professional development, staff-to-child ratios and teacher qualifications. The report does not rank states for performance on individual quality standards but for total performance on all 10 quality standards.

Barnett said California has the potential to be a model for quality preschool programs that will “benefit the rest of the country.” But it will require taking a hard look at what’s working in the transitional kindergarten and state preschool programs and combining the successful strategies of both, he said.

California did not meet the benchmark for professional development in either transitional kindergarten or state preschool. It also did not meet the benchmark for class size of 20 students or fewer per classroom. The report measures teacher qualification in several categories, which include whether teachers have bachelor’s degrees, specialized training in preschool education and whether assistant teachers have a credential in early childhood education.

Most states do not track how many dual language learners are in preschool programs and do not require teachers to have specialized language training, the report states. Only six state pre-kindergarten programs, including California’s transitional kindergarten program, require lead teachers to have specific training to work with dual language learners, the report states. No state requires specific training for teacher assistants, it states.

Only 13 states, including California, have policies that support families of preschoolers learning more than one language, such as providing enrollment materials and outreach in a family’s home language and collecting information on students’ home language through language surveys, it states.