Legislative leaders in Sacramento strike deal with Gov. Brown on education funding in his last budget 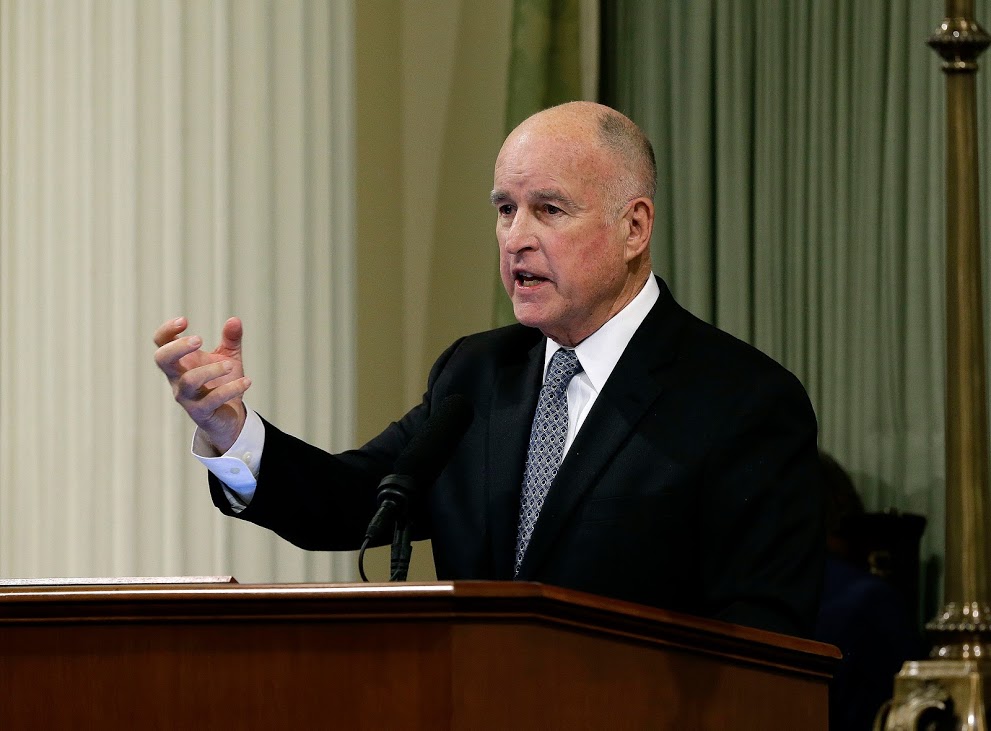 The march toward a state budget deal for the coming fiscal year took a significant step forward Friday as Gov. Jerry Brown and leaders of the California Assembly and Senate agreed Friday on a proposed spending package that funds the governor’s marquee higher education plans to create a new online college and dramatically overhaul how community colleges are funded by the state.

The agreement, reached among Brown, Assembly Speaker Anthony Rendon and Senate President pro Tem Toni Atkins, represents a compromise between Brown’s budget proposals and those emanating from the Legislature.

A 10-person budget conference committee approved the compromise agreement Friday night. It now returns to both chambers in the Legislature for final approval by June 15 and  to Brown for his signature.

The agreement also offers more funds for the University of California and California State University than Gov. Brown proposed. That prompted UC President Janet Napolitano to announce Friday that the 10-campus system will forego a tuition increase if the compromise becomes law.

“The University of California is pleased that state government leaders appear to have reached agreement to increase funding for the university in the 2018-19 fiscal year state budget that will allow UC to put off a tuition increase for California students and provide much-needed funds for deferred maintenance,” Napolitano said.

CSU Chancellor Timothy White expressed satisfaction with the budget agreement. “By providing sufficient funding to the California State University in the state’s 2018-19 budget, Gov. Brown and the Legislature made a wise decision that will provide California and Californians with both immediate and far-ranging benefits,” he said.  CSU previously had said it would not increase tuition for the upcoming school year.

The budget agreement on community colleges was approved with strong support from Community Colleges Chancellor Eloy Ortiz Oakley, but came against the backdrop of pushback from faculty and skepticism among some high-ranking lawmakers about the merits of the reforms proposed by Gov. Brown.

Brown and his allies have argued that his proposed online community college would serve 2.5 million so-called “stranded workers” currently not served by the state’s 114 community college system. These are workers who lack the skills they need to advance in the workplace, and could benefit from additional training.

Critics of the plan said the community colleges could address the needs of these workers without establishing a separate college. Jonathan Lightman, executive director of the Faculty Association of California Community Colleges, said that his association  “continues to believe that the best investment is in our 114 colleges that offer online education as part of their programs and that the Legislature is missing an opportunity to do a greater investment in these institutions’ ability to serve their communities.”

However, the budget agreement does include new funding for the Online Education Initiative, an existing community college program.  It will get $35 million to award competitive grants to develop online courses and content, apart from whatever is done at the stand-alone online college.

Legislative leaders also reach a compromise agreement on Brown’s proposed funding formula for the community colleges that would for the first time tie the award of some state funds to community colleges to the academic progress of their students.  By so doing, he would move away from a system that funds the campuses almost entirely based on how many students they enroll to one in which students’ academic performance would be taken into accountant.  Student performance would be measured on indicators such as degree and certificate completion, transfer rates to a four-year college, and whether students benefit financially from their community college education when they enter the workplace.

The budget plan also includes $10 million for a state-run California Education Learning Lab that would award grants to create and redesign science, technology, engineering and math (STEM) online and “hybrid” courses at all three systems of public higher education.

Regarding K-12 education, legislators had been pushing Brown to permanently add more money to the Local Control Funding Formula, districts’ primary source of unrestricted spending. He agreed to do so by $407 million. This would mean districts would have more flexibility in spending some of the funds they will receive.  But the amount represented about half of what lawmakers were seeking.

Although under pressure to do so, Brown also wouldn’t budge on substantially increasing funds for preschool and after school and summer programs.  The agreement, however, does include $100 million in one-time “facilities grants” for full-day kindergarten.

Brown refused to commit the next governor to substantially raising the level of the state’s Local Control Funding Formula formula to the average level of the top 10 highest spending states as measured by per-student spending.  That would require the state to spend at least $30 billion more over time. That’s what was proposed in Assembly Bill 2808, authored by Assemblyman Al Muratsuchi, D-Torrance. In state rankings released this week by Education Week, California ranks 44th in the nation in per pupil spending, based on regionally adjusted costs of education in 2014-15.

As for special education,  the agreement did not include $200 million legislative leaders had sought to partially equalize per-pupil funding among districts.  Districts cover more than 60 percent of the costs of special education, with the federal government covering only about 10 percent and the state chipping in about a quarter. But the state’s share is distributed inequitably, based on an out-of-date formula, ranging between $500 and $950 per student. Brown did include $125 million in one-time money in his proposed budget to address the shortage in special education teachers, including through intensive teacher preparation programs known as “residencies.”

Another priority of the Legislature was to create an ongoing new grant, under the Local Control Funding Formula, for additional money for the state’s lowest performing student group, which at this point would be African-American students as measured by test scores, as proposed by  Assemblywoman Shirley Weber, D-San Diego, in AB 2635. In the budget compromise, Brown agreed to an additional $300 million in one-time money for this purpose.

Brown and legislative leaders agreed to continue funding for career and technical education by $300 million per year. That will be split evenly between the Career Technical Education Incentive Grant program scheduled to end this year, and programs run through the community colleges’ Strong Workforce program.

To the disappointment of some school district leaders, the budget agreement does not include a provision to provide relief to four districts repaying state loans due to fiscal distress. The districts are Inglewood Unified, Oakland Unified, Vallejo City Unified and the South Monterey County Joint Union High School District.  They had been hoping the state would agree to defer loan payments for up to five years, allow them to sell or lease surplus property to repay the loans, and provide the same levels of “average daily attendance” funding they are currently receiving, even though some are experiencing declining enrollment. Inglewood was hoping to receive at least $4 million a year in state relief for two years.

Although relief for the four districts did not materialize, AB 3228 authored by Assemblywoman Autumn Burke, D-Inglewood, would allow the districts to sell surplus property to pay back their state loans. The bill is currently being reviewed by the state Senate. In addition, Department of Finance has the authority to grant state loan deferrals to districts that demonstrate they may not be able to afford them.

Read full details of the agreement considered by the budget conference committee here.