LA’s choice: In charter wars, board members say they will seek bridge builder as next schools chief 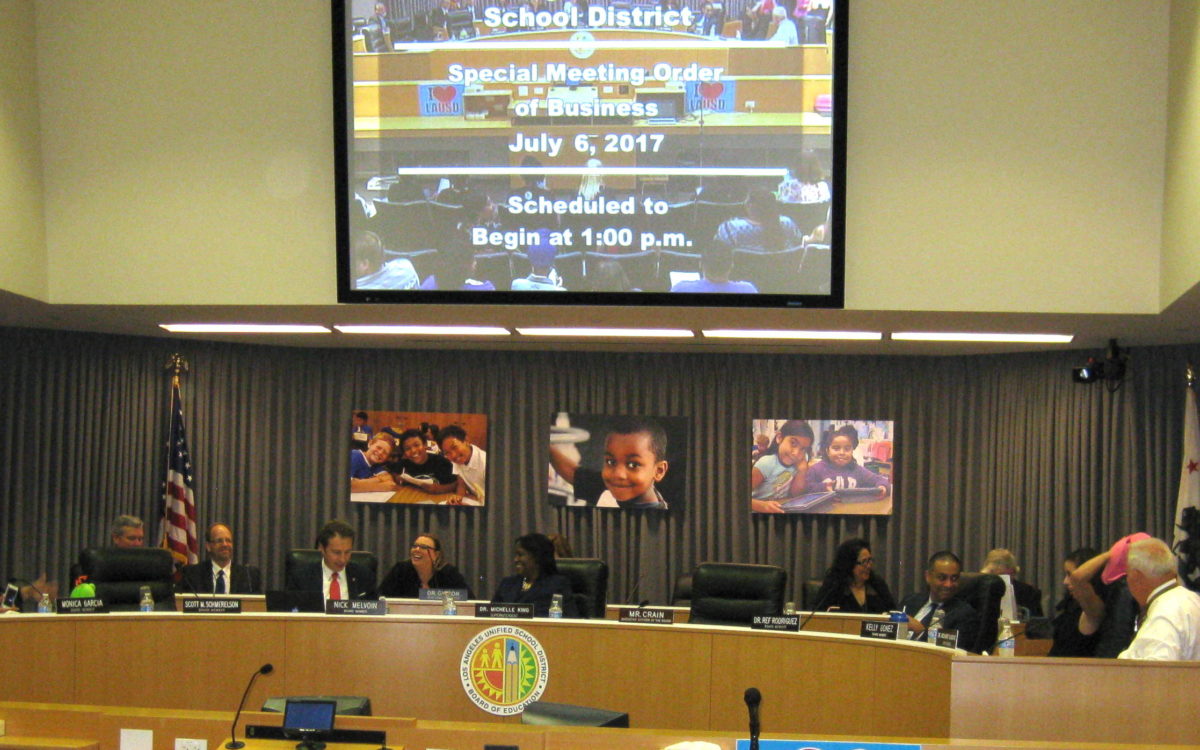 As the Los Angeles Unified school board gears up to select a successor to Superintendent Michelle King, one of the major issues it will have to consider are the candidates’ views and positions on charter schools.

Last spring, candidates supported by funds from wealthy charter school advocates won a majority on the seven-person board for the first time.

Now, following King’s announcement this month that she will retire by June 30 for medical reasons, the new board will have an unexpected opportunity to make the most important decision any board can make — hiring a superintendent who will shape the direction of education policies in the district, possibly for years to come.

So far, the board majority has not promoted an aggressively pro-charter agenda. But the person it selects to be the next superintendent will be closely watched. Observers will see whether the board chooses an explicitly pro-charter advocate, or someone who is not closely identified with either camp and is able to take a more conciliatory or mediating stance — much like King did and acting superintendent Vivian Ekchian has done since she took over from her last October.

Raphael Sonenshein, executive director of the Pat Brown Institute for Public Affairs at Cal State Los Angeles, said the charter issue will be hard to ignore in the selection process — but predicted that a candidate’s positions on charter schools won’t be a decisive factor.

“The charter school issue is the elephant in the room,” he said. “I think the board will want to know if a candidate has a commitment for or against charter schools; but I don’t believe the issue will be a litmus test for who is to be considered. ”

UCLA professor Pedro Noguera, the faculty director of the newly established Center for the Transformation of Schools in UCLA’s Graduate School of Education and Information Studies, said he thinks the board will want to avoid reviving the charter conflicts of recent years.

“My sense is that the board is trying to work together and that it seeks to avoid polarization,” Noguera said.

As a result, he said, “it is likely that they will try to find a superintendent who is neither hostile to charter schools and does not favor them over traditional public schools either.”

He said that given that United Teachers of Los Angeles, the district’s powerful teachers union, “will be watching this process closely, my hunch is that the board will avoid selecting someone who is regarded as hostile to the interests of the union too.”

A model for whom they might appoint is the retiring superintendent herself, who did not come from the charter school sector but instead had worked in the district for decades in a variety of roles.

During King’s less than two years in the top position, she tried to bridge district differences with the charter school community by eschewing what she termed “us versus them language,” Instead, she emphasized that regardless of whether students attend charter schools or regular public schools, “they’re all public school students.”

After King announced she would be stepping down, California Charter Schools Association President Jed Wallace praised King for “being a strong supporter of education choice and the replication of innovative school models to best meet the needs of each student.”

In an interview with EdSource, board president Monica Garcia avoided commenting on the charter issue directly, but praised King’s “all-kids strategy,” and her leadership in focusing on promising practices in charter and traditional schools and tackling the shared facilities issue.

She suggested that is what she should be looking for in the next superintendent.

“Candidates who can express the need to serve all kids and express the need for urgency and the value of diversity of strategy will do well,” she said. “We need leadership to unite us and we need the kind of courage that will lead us to success.”

In comments to EdSource last week, Nick Melvoin and Kelly Gonez, the two newly elected board members who won their races last spring with millions of dollars in support from charter school advocates, both made the kind of bridge-building statements that they have been making since their election last spring.

They both described what they were looking for in a superintendent in broad terms, and did not cite charter schools as a central consideration.

Melvoin said the next superintendent should support partnerships between charter schools and district-managed schools.

“When nearly 1 in 5 children in L.A. attend a charter school, I think it’s important that the superintendent of L.A. Unified similarly sees charters as valuable partners in our efforts to improve student achievement,” Melvoin said. “If we collaborate with charter schools, and acknowledge that many of our parents have children in both traditional schools and charter schools, we can move beyond the ‘us versus them’ mentality that too often hinders the rapid academic growth our students deserve.”

Gonez said her focus in looking for a new superintendent was not a commitment to expanding charter schools, but to improving achievement for all students in the district.

“As I’ve stated numerous times, my priority is strengthening district schools so that every child can thrive, not expanding charter schools,” Gonez said. “I hope to have a superintendent who shares that commitment to closing opportunity and achievement gaps for our most vulnerable students and ensuring that all schools prepare our students for success in college, career and life.”

In last year’s election, Gonez and Melvoin received nearly $10 million in campaign support, much of it coming from pro-charter advocates contributing to independent expenditure committees. nearly double the amount that their opponents received from unions and pro-union organizations.

The largest independent expenditures made on behalf of Melvoin and Gonez was made by the Parent Teachers Alliance, a pro-charter political action group that contributed $5.1 million — much of that coming from funds that the California Charter Schools Association Advocates gave to the alliance.

California Charter Schools Association Advocates, an independent expenditure committee affiliated with the state’s charter school association, spent $2.2 million backing Gonez. Reed Hastings, CEO of Netflix and a former president of the State Board of Education, was a major contributor to the California Charter Schools Association Advocates during the campaigns for the board seats, although he did not make direct donations to Melvoin and Gonez.

Despite the large sums of money from charter supporters, Sonenshein said he does not expect these donors to exert public, overt pressure on Gonez and Melvoin “because it might backfire.” What pressures they might bring behind the scenes is as yet unknown.

Sonenshein noted that charter-backed members have a slim voting edge on the board that could disappear if Ref Rodriguez, a member of the board majority, is convicted for  campaign finance law violations he has been charged with, or if he steps down voluntarily.

That provides another reason for the board to select a candidate that is acceptable to all its members, not just the majority elected with charter allies’ support. That would almost certainly require choosing someone not too closely identified with charter school forces in the state or beyond.