In race for California governorship, Newsom and Villaraigosa pledge unity 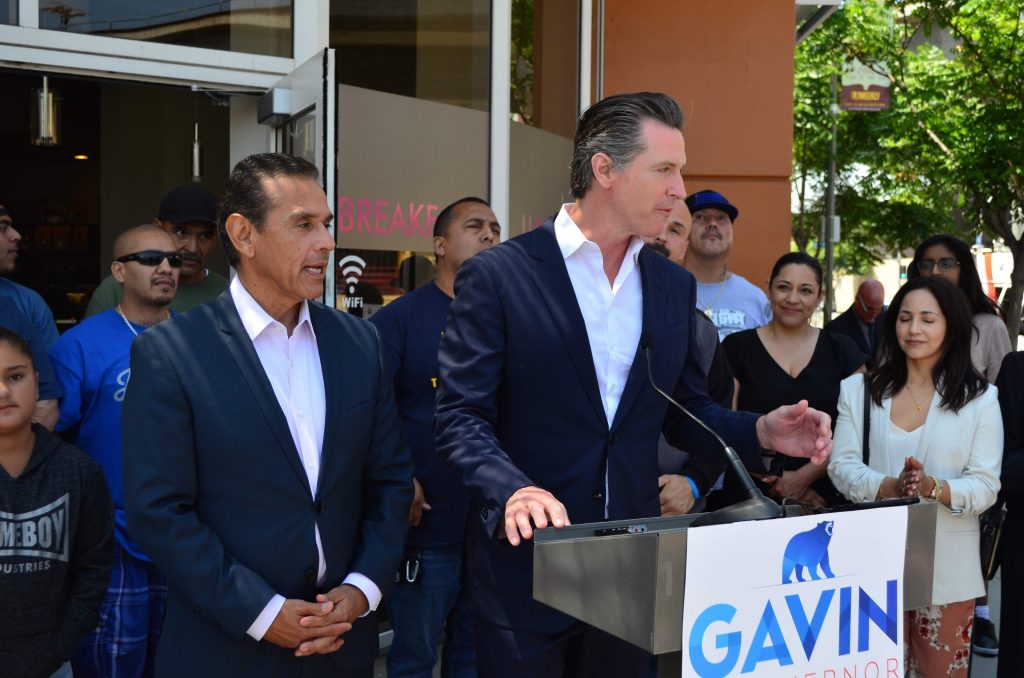 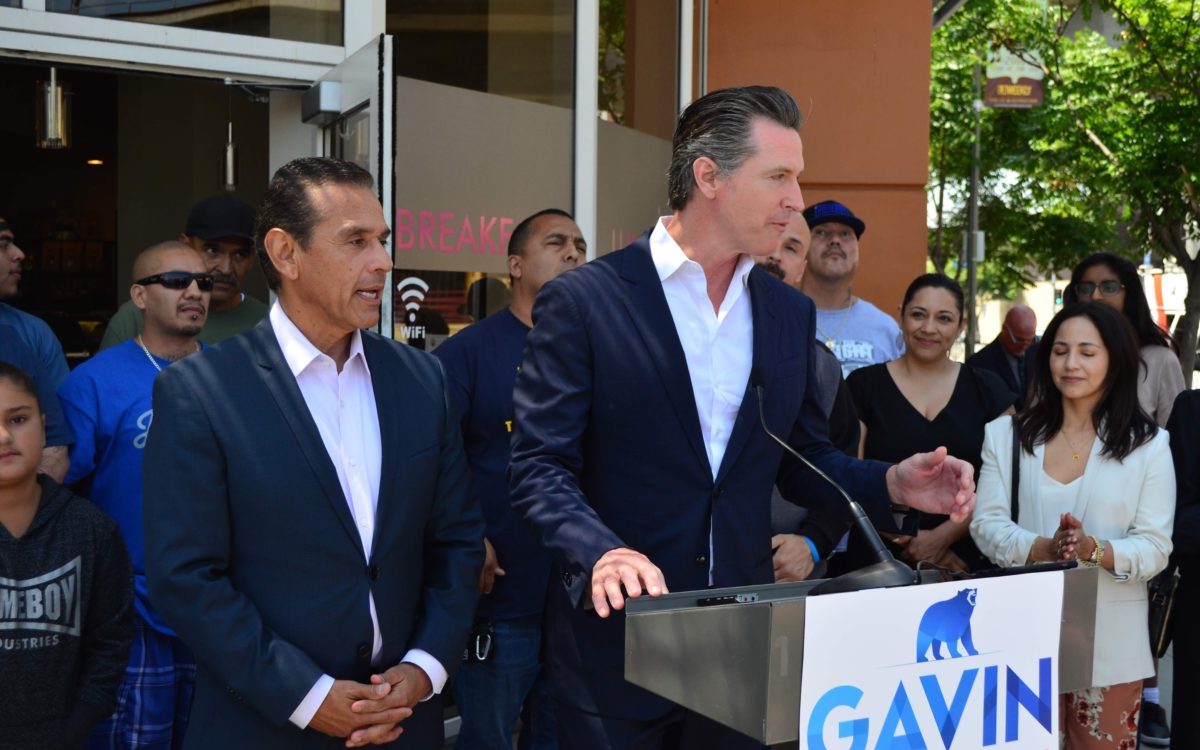 Following a breakfast together on Tuesday, they vowed to work together to defeat what former Los Angeles Mayor Villaraigosa called the “threat” posed by a Republican agenda put forward by GOP candidate for governor John Cox and President Donald Trump. Newsom will face Cox, who placed second in the June 5 primary, in the November runoff.

Newsom and Villaraigosa met on Villaraigosa’s turf at the Homegirl Cafe in downtown Los Angeles, which is run by Homeboy Industries, a nonprofit organization that provides a range of services for former gang members and previously incarcerated men.

Villaraigosa endorsed Newsom the night of the primary election, when Newsom won 33.5 percent of the vote. But this was the first time they had met publicly since then.

Villaraigosa came in third in the primary, with only 13 percent of the vote. Because only the top two vote-getters compete in the November general election, Villaraigosa was knocked out of the race.

Villaraigosa’s faltering campaign got a huge boost this spring when the California Charter Schools Association Advocates endorsed him and set up an independent expenditure committee that raised $23 million, mostly from multi-billionaire charter school backers. The committee ran television and radio ads supporting Villaraigosa — and attack ads against Newsom. The ads accused Newsom of “boasting,” “overselling his achievements,” “making false claims,” and only showing up for work one day a week “tops.” “Not gonna work” as governor, the ad charged.

A residual post-election issue is whether these negative tactics would chill Newsom’s views on charters, which he has supported in the past, and potentially affect his policies towards them.

Yesterday Newsom insisted that he has put whatever happened in the race behind him. “Not at all,” he responded, when asked whether the criticisms from charter school backers would have any impact on how he approached the issue as governor, should he be elected in November.

“That’s all water under the proverbial bridge,” he said. “You look forward, you don’t look back. Honestly, I’m looking at the task at hand. I’m looking at the course over the next few months, looking to help unify the Democratic Party, not just for this campaign and all the down-ballot races but all those congressional races.”

Previously, Newsom had called for a “temporary pause” in expanding charter schools in the state until there was more transparency in their management and finances. Yesterday, he said the issue of a pause would be moot, because he would sign legislation that Gov. Jerry Brown has vetoed in the past that would impose greater accountability provisions on charter schools

He was apparently referring to legislation like Assembly Bill 709, which Brown vetoed in 2016, and an almost identical bill he vetoed two years earlier. Among other things, the bills would have required charter schools to comply with the state’s open meetings, public records and conflict of interest laws.

“I don’t expect that (the need for a charter school pause) to be an issue whatsoever because the Legislature on multiple occasions has passed a bill for the governor to sign,” he said. “The governor for whatever reason has vetoed that bill. I would support that bill.”

By law, the pro-charter committee backing Villaraigosa is supposed to conduct its activities independently of the candidate or his campaign. Yesterday Villaraigosa distanced himself from any of the negativity in the campaign.

“We say a lot of things in the course of a campaign,” he said. “I not only support his (Newsom’s) candidacy but I’m going to support him as governor, when he is governor … This threat that Donald Trump represents, that John Cox represents, is a threat that I think requires all of us to work together and I intend to do that.”

“We were disappointed,” Borden said in an interview last week with EdSource. “While we would have wanted to see the results being different, we were proud to support someone we have called a friend in the work for a long time.”

“We knew it would be an uphill road to travel to get him into the top two,” Borden said.

In March, at the annual conference of the California Charter Schools Association, Jed Wallace, president of the organization, speaking in his capacity as a board member of CCSA Advocates, said that if elected governor, Newsom would “inflict major harm on our schools and claim to be our friend. ”

“This is probably the most hostile, the most threatening position (toward charter schools) that anyone this close to the governorship has ever had,” said Wallace, charging that Newsom supported a moratorium on charter expansion.

In response to the post-election reality, Borden seemed to take a big step backwards from the tenor of those remarks, acknowledging that Newsom has been a supporter of charter schools in the past.

“I think that Gavin Newsom has a record of supporting charters that goes back to the days when he was mayor of San Francisco,” he said. “He has also said very positive statements about charter schools in the primary and even subsequent to the primary.”

At the same time, despite the apparent olive branches being extended on all sides, it is impossible to know whether underneath it all there are tensions and resentments that could have an impact on charter politics in the state going forward.

Last week, for example, Newsom told the LA Times that “I never doubted Villaraigosa’s relationships [with the charters]. I was not surprised or even necessarily disappointed with their support of him. What did surprise me…was the negativity,” Newsom said. “I don’t get it. I still don’t get it. I don’t understand the strategy.”

As for his relationship to the charter schools association, “it hasn’t enhanced the relationship,” he told the LA Times. “It’s not stronger because they misrepresented my 20-year record.