In limbo, DACA students look to Congress again for help 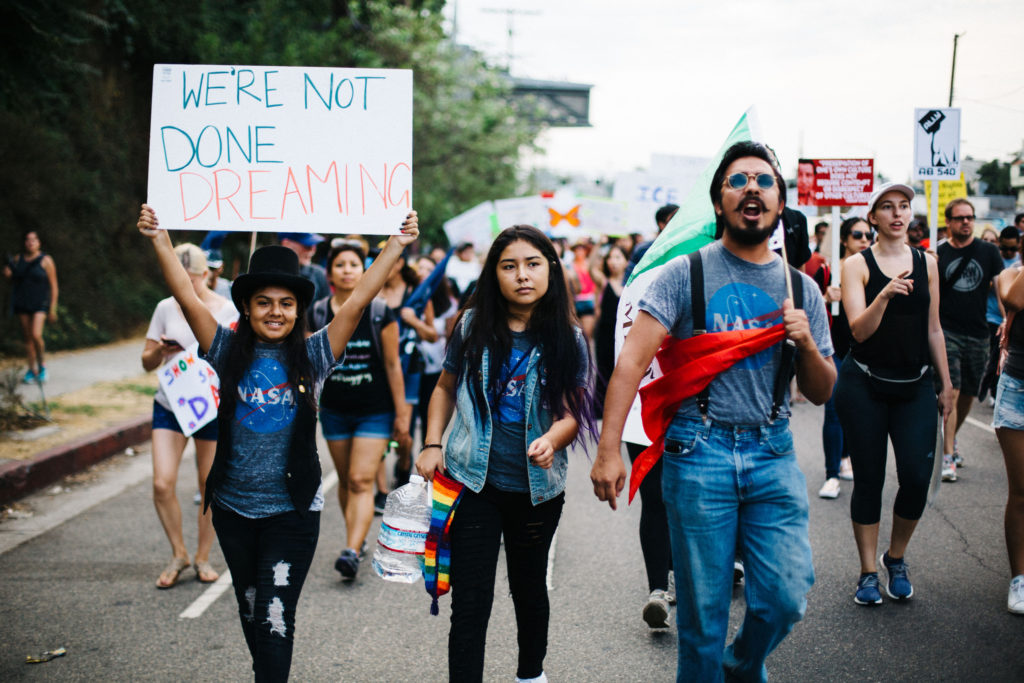 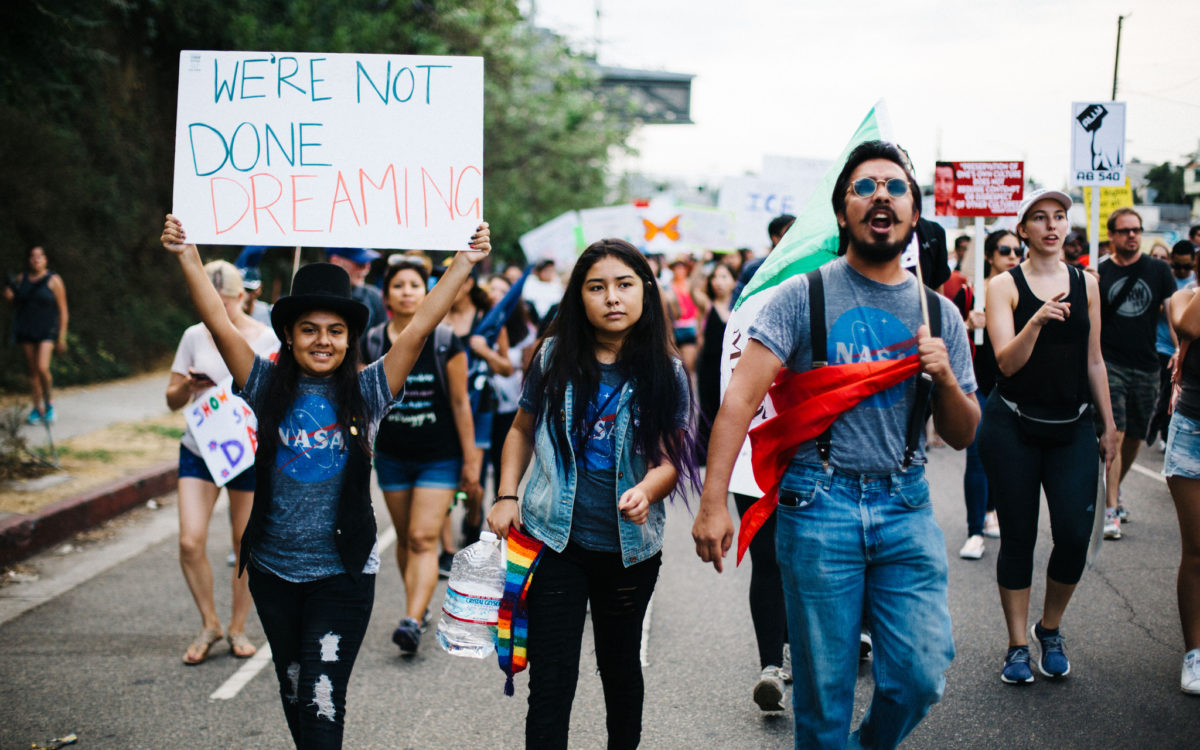 The imminent Democratic takeover of the House of Representatives is renewing hope that undocumented immigrants who came to the United States as children will get some permanent relief from the ongoing threat of deportation.

“Now that we’ve put them in power, we hope they can do the right thing and use their leverage to pass something permanent,” said Melody Klingenfuss, a 24-year-old immigrant rights organizer who came to the U.S. from Guatemala when she was 9.

Klingenfuss is also a recipient of Deferred Action for Childhood Arrivals, or DACA, the program put in place by President Barack Obama in 2012 that provides temporary protection from deportation and permission to work for about 700,000 young people who came to the US as children. Just over 200,000 DACA recipients live in California, by far the highest number of any state, according to the Migration Policy Institute.

Klingenfuss is an organizer for the Coalition for Humane Immigrant Rights (CHIRLA)’s California Dream Network — a college-based organization advocating on behalf of undocumented immigrants. She says she and other immigrants who came here as children spent a month knocking on people’s doors to get out the vote in the congressional district where Democrat Katie Hill unseated Republican Steve Knight, in Los Angeles and Ventura counties.

It was just one of many districts in California where immigrant youth worked to get out the vote for representatives they believe will work to pass a bill to give them a path to citizenship when Democrats retake control of the House of Representatives in January.

For many months last year, the fate of DACA was a topic of frenzied political activity and media attention. But DACA recipients — referred to as “Dreamers” by immigrant advocates — are no longer at the center of public attention. Their plight has been overshadowed by Trump’s focus on the caravans of Central Americans seeking to enter the U.S. and the larger issue of how easy or difficult it is to get political asylum in the U.S.

For many DACA recipients, it feels like the courts are playing tug-of-war with their lives.

“It’s nerve-wracking,” said Alejandra Hipolito, a first-year student at Los Angeles Trade Technical College. “I just wish they could get in my shoes and know how it is to be a DACA student, how we suffer through this.”

The Trump administration has been trying to end the DACA program since September 2017, saying it is up to Congress to come up with a solution to how to keep DACA recipients in the country. The president later tied approval of any Congressional action to funding for his border “wall” and other criteria unacceptable to Democrats, effectively thwarting passage of any possible legislation.

Multiple lawsuits have been filed to keep the DACA program in place. As a result of those lawsuits, U.S. Citizenship and Immigration Services is still accepting applications from those who already have the protection and want to renew it, but no new applications are being accepted.

Texas and six other states are currently suing to end the program, arguing that immigration laws should be decided by Congress and not by executive order like the one Obama issued to set up the program six years ago.

In the latest court action, earlier this month, the Ninth Circuit Court of Appeals — the same court Trump denounced as a “complete and total disaster” — upheld a lower court decision, blocking the Trump administration from ending the DACA program immediately.

Meanwhile, the administration is asking the Supreme Court to take up the cases as soon as January, in an attempt to circumvent the appeals process.

Trump is pushing now to get $5 billion in border wall funding before the Democrats take over the House, but in an interview with Politico this week, he said he wasn’t open to a deal for Dreamers until after the Supreme Court decides on the DACA cases.

“I think DACA is gonna be much more interesting to talk about when we go to the Supreme Court,” Trump said.

The University of California is the lead plaintiff in the case that came before the Ninth Circuit. UC President Janet Napolitano was formerly Secretary of Homeland Security under Obama and in that capacity she initiated the DACA program.

Napolitano’s office responded to this month’s Ninth Circuit ruling by calling on Congress to move forward an immigration reform bill that would give permanent protection and a path to citizenship to young undocumented immigrants. “While the ruling is welcome news, we stress that DACA recipients deserve better than to see their life prospects rise and fall based on events in litigation,” the statement reads.

Twenty-nine year-old Gabriela Cruz, who was brought to the U.S. from Mexico when she was a year old, isn’t holding her breath.

“We can’t leave it up to any party, even the Democratic party, to push forth the issue,” said Cruz, who lives in California and is currently a fellow with United We Dream, the largest immigrant-youth-led organization in the country. As a fellow, Cruz helps organize and advocate for passing a bill for Dreamers. “At the end of the day, it’s not their lives, it’s our lives that are at stake. I think whether they get it together and pass something is really up to people like me and organizations to press forth the issue and the urgency of this matter.”

In February of this year, House Minority Leader Nancy Pelosi spoke for eight hours on the House floor to persuade GOP colleagues to continue the DACA program, but Democrats ultimately failed to do so.

Republicans attempted to pass a bill in June that would have extended DACA and at the same time would have funded a border wall, made it harder to apply for asylum, kept immigrant families with children detained indefinitely and reduced legal family-based immigration. That bill failed without the support of any Democrats and with over a hundred Republicans opposing it as well.

In April, at a Georgetown University town hall-style meeting, Luis Gonzalez, an undocumented student from Santa Ana, asked Pelosi what it would take to pass a bill to get permanent protection for Dreamers.

“We will pass legislation to protect the Dreamers,” Pelosi answered. “This is about people, human beings, all God’s children. They go to church on Sunday, a lot of the people who are so anti [immigration reform.] I say to them, I say to my colleagues, ‘You pray in church on Sunday, and then you prey on people the rest of the week. What is this?’”

Even if a Democratically-controlled House were to approve DACA legislation, it would still have to be approved by the U.S. Senate, where the outcome is uncertain at best.

“There is heightened anxiety,” said Liliana Iglesias, program director for UC Berkeley’s Undocumented Student Program, which helps undocumented students get academic support, counseling and legal help. She said students wonder what will happen after they graduate and if they will even be able to use their degree in the job market.

“I see [the Ninth Circuit decision] as a little battle that was won, but then there’s still the bigger war that we’re still trying to fight and win,” Iglesias said.

Immigration law experts say that even if the Supreme Court takes up the case in January, as the Trump administration has requested, a final ruling would not likely be made until the spring or later.

In the meantime, organizations across the state and the country have been helping students and other DACA recipients submit renewal applications. CHIRLA and United We Dream both have funds set up to pay the $495 renewal fee for applicants.

To be eligible for DACA, immigrants had to have arrived here before they were 16, lived continuously in the U.S. since June 15, 2007, graduated from high school or obtained a GED, be a veteran of the Coast Guard or the U.S. armed forces, or be enrolled in school, not be convicted of a felony or a significant misdemeanor in the past three years and not pose a threat to national security or public safety.