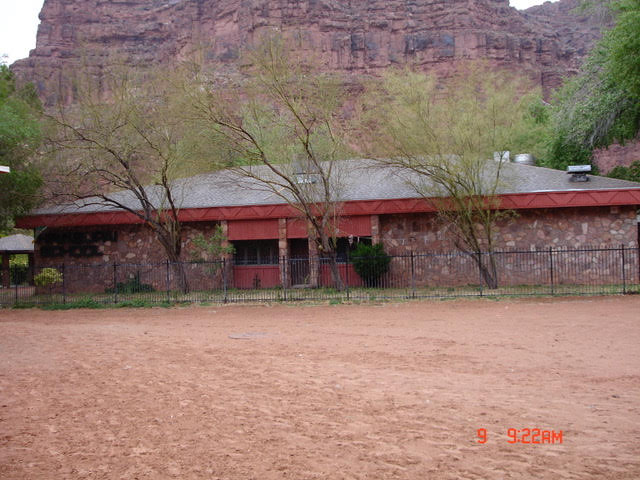 David Washburn / EdSource
The elementary school located within the Havasupai Indian Reservation in the Grand Canyon. A federal lawsuit is demanding that students at the school receive services due to the trauma and adversity they experience in their community.

David Washburn / EdSource
The elementary school located within the Havasupai Indian Reservation in the Grand Canyon. A federal lawsuit is demanding that students at the school receive services due to the trauma and adversity they experience in their community.

A lawsuit brought on behalf of schoolchildren in the most remote Native American community in the United States is addressing an emerging question in public education — namely, are school districts required to provide disability services to children who’ve suffered trauma related to poverty and discrimination.

U.S. District Judge Steven P. Logan last week denied a request by the federal government to dismiss most of the case involving children at the Havasupai Elementary School, which is located on the floor of the Grand Canyon in Arizona. The complaint alleges that the Bureau of Indian Education (BIE) and other federal agencies have failed to provide the children with even the most basic education — including health and wellness services.

In his ruling, Logan said the plaintiffs “have adequately alleged that complex trauma and adversity can result in physiological effects constituting a physical impairment.”

“This ruling is a long overdue step toward reckoning with the legacy of oppression that has stained this nation’s consciousness,” said Kathryn Eidmann, a senior attorney for Public Counsel, a Los Angeles-based public interest law firm.

Besides Public Counsel, other firms involved in the case include the Native American Disability Law Center, the Stanford Law School Youth and Education Law Project, and the American Civil Liberties Union of New Mexico.

The case is important, say experts in civil rights and disability law, because of its potential to impact not only on the 183 schools run by the federal Bureau of Indian Education (BIE) — including two in California — but all public schools.

Logan’s decision builds on a ruling in a class-action suit brought in 2015 on behalf of students in the Compton Unified School District in Los Angeles County. In that case, U.S. District Judge Michael W. Fitzgerald ruled the students in the district could be classified as disabled due to the trauma and adversity they experience while growing up in one of the county’s poorest cities. He refused the district’s plea to dismiss the case.

Fitzgerald was careful to state in his ruling that he was not making a decision on whether a particular student suffered a disability under the law due to trauma and adversity, but that he “simply acknowledges the allegations that exposure to traumatic events might cause physical or mental impairments that could be cognizable as disabilities,” he wrote.

The plaintiffs in the Compton case are currently in settlement talks with the district “to develop a long-term plan to address possible educational barriers for children who are affected by trauma and complex trauma,” according to a March 27 court filing.

Fitzgerald’s ruling is considered a landmark because the Compton plaintiffs were the first in the nation to use special education law to argue for accommodations for students whose ability to concentrate and learn is impaired by the stress of repeated violence, abuse and neglect.

The Havasupai case, filed in January 2017, alleges the government agencies have violated federal laws requiring them to provide services to disabled students.

It further argues that the children at Havasupai Elementary qualify for such services because of the trauma they’ve experienced living in an impoverished community and the historic oppression and displacement of Native Americans by the U.S. government.

The underlying federal law in the case is Section 504 of the Rehabilitation Act of 1973, which prohibits discrimination in educational programs operated by the federal government. “Specifically, the BIE has failed to provide special education to children with disabilities or provide necessary wellness and mental health supports to ensure that all Havasupai children have an opportunity to learn,” lawyers for the schoolchildren argue.

Daniel Losen, a lawyer and director of the Center for Civil Rights Remedies at UCLA’s Civil Rights Project, said the ruling could have a widespread impact on disability law in education.

“This is an important distinction that these traumatized children can develop special education needs and are protected under Section 504 and (could also be) eligible for services under the [Individuals With Disabilities Education Act],” said Losen, who is not involved in the case.

Much research in recent years has been devoted to the long-lasting effects of what are known as “adverse childhood experiences.” And teachers and administrators are increasingly being trained on how to view student behavior through a “trauma-informed” lens.

The plaintiffs’ lawyers hailed Logan’s decision as precedent-setting not only for Native American students under the federal government’s jurisdiction, but for students everywhere who suffer from childhood trauma either due to their current environments or because of longstanding systems of oppression.

The suit details a dismal educational environment at the school within the Havasupai Indian Reservation, which is located along the western corner of the Grand Canyon’s south rim and can be accessed only by helicopter or an eight-mile trek by foot or on horseback into the canyon.

Although the tiny community is adjacent to the stunning Havasupai Falls, which are among the canyon’s greatest wonders, its people suffer from extreme poverty and the maladies that accompany it, including rampant unemployment, high rates of alcohol abuse and domestic violence, and involvement in the criminal justice system.

“Defendants have knowingly failed to provide basic education, a system of special education, and necessary wellness and mental health support to Havasupai students, resulting in indefensible deficits in academic achievement and educational attainment,” the complaint said.

The complaint goes on to state that the school, which currently enrolls 70 students in grades K-8, fails to educate students in any subjects other than basic reading, writing and math; it lacks a system to provide special education; it’s understaffed and the teachers it does employ are underqualified; it doesn’t have a functioning library; and teachers and administrators use excessive and exclusionary discipline on the children.

In an amicus brief filed on behalf of the plaintiffs, the Society of Indian Psychologists writes that without the “basic education needed to develop resiliency, (the community conditions) impair an individual’s ability to learn, communicate, and participate in society.”

In its motion to have the case dismissed, the federal government’s lawyers acknowledged the trauma experienced by the children at the school, but argued that it is due solely to disadvantages of the surrounding community and it does not rise to the level of a disability under the Rehabilitation Act.

“[The case] should be dismissed because exposure to adversity and trauma is insufficient to establish that plaintiffs are disabled individuals who were denied benefits solely by reason of any alleged disability,” the government’s motion read.

Logan, in his ruling, disagreed, saying the “plaintiffs have adequately alleged that complex trauma and adversity can result in physiological effects constituting a physical impairment that substantially limits major life activities within the meaning of Section 504 of the Rehabilitation Act.”

The government’s attorneys have not publicly commented on the case. A spokeswoman for the BIE did not respond to an EdSource reporter’s call for comment.

Eidmann, who was also involved in the Compton case, says that Logan’s ruling builds on the prior ruling because it sets precedent regarding not only the trauma students experience in their own lives, but also historical and inter-generational trauma experienced by communities of color.

“In addition to present-day trauma, a child’s [learning] is also impacted by a community’s history of forced relocation, segregation in housing, and mass incarceration,” she said. “Any school serving a trauma-impacted population should be aware that they have an obligation to address it under this case and the Compton case as well.”

The case is now set to move into its discovery phase. Eidmann said she hopes Logan’s ruling will lead to a timely settlement. “Every day this case drags on more and more children lose a chance at an education,” she said.