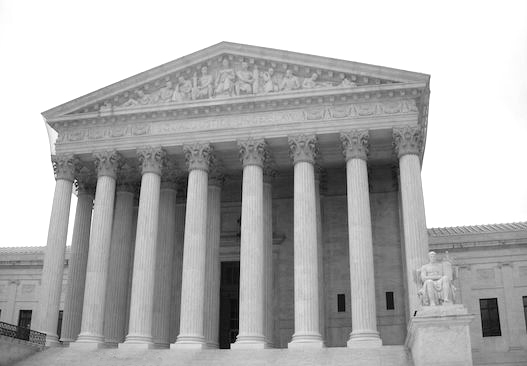 The U.S. Supreme Court ruled Wednesday that public employee unions like the California Teachers Association can no longer collect mandatory fees from the workers they represent — a decision that could sap the strength of unions in California and 21 other states where such fees have been state law.

In the 5-4 decision, the court’s conservative majority overturned a 40-year-old precedent and sided with Mark Janus, a social worker for the Illinois state government, who sued the American Federation of State County and Municipal Employees (AFSCME) over $45 in annual “agency fees” he was required to pay the union to cover its collective bargaining and representation costs.

Janus — who was represented by the National Right to Work Legal Defense Fund and the Liberty Justice Center, both conservative foundations — argued that the fees violated his free speech rights under the First Amendment because he was forced to pay them even though he disagreed with the union’s political views. AFSCME’s lawyers argued that the fees did not constitute political speech, rather they prevented employees from becoming “free riders” who benefit from the union’s work on their behalf but don’t pay for it.

Writing for the majority, Justice Samuel Alito was unequivocal in siding with Janus, saying “we conclude that [the mandatory fee requirement] violates the free speech rights of nonmembers by compelling them to subsidize private speech on matters of substantial public concern.”

Alito went on to write that these speech rights extend to “fundamental questions of education policy” in which teachers’ views may differ from union positions.

“Should teacher pay be based on seniority, the better to retain experienced teachers?” he wrote. “Or should schools adopt merit-pay systems to encourage teachers to get the best results out of their students?”

Writing for the four dissenting justices, Justice Elena Kagan said there was no good reason for the court to overturn the 1977 precedent, Abood v Detroit Board of Education, in which the Supreme Court justices ruled that unions could charge the agency fees as long as the proceeds weren’t spent on their lobbying and political campaigns.

“There is no sugarcoating today’s opinion,” Kagan wrote. “The majority overthrows a decision entrenched in this nation’s law — and in its economic life — for over 40 years.”

Kagan also pointed out that the majority in its ruling showed an unusual disregard for precedent. She wrote: “Rarely if ever has the Court overruled a decision — let alone one of this import — with so little regard for the usual principles of stare decisis,” which refers to the legal principle that gives authority to previous precedents.

In practical terms, this means as of Wednesday school districts and other public agencies must immediately stop deducting agency or so-called “fair share” fees from the employees’ paychecks who have already opted out of full union membership.  In the California Teachers Association’s, about  9 percent of teachers fall into this category. Going forward, new employees must affirmatively agree to make any payments to the union before any money can be deducted from their paychecks.

Although they acknowledged that the ruling was as bad as it could have been for them, union leaders said Wednesday it is an outcome that they’ve been ready for.

“This is a sad day for workers and American families that will skew economic power to corporate elites,” said California Teachers Association President Eric Heins. “But we have been preparing for this day for years and will continue to reach out to members. Our power is not in our money and never has been. It has been in collective values and in relationships we build with teachers.”

While it is unusual for the Supreme Court to overturn a precedent, Monday’s outcome was widely expected. In 2016, the court seemed likely to overturn Abood via a case brought by Rebecca Friedrichs, an Orange County teacher, against the CTA. But it ended in a 4-4 deadlock because Justice Antonin Scalia, the court’s most visible conservative, died unexpectedly in February of that year before a decision could be rendered.

Throughout 2016, the Republican-controlled Congress successfully stonewalled President Barack Obama’s choice to fill the vacant seat, and one of President Donald Trump’s first major actions after taking office was to nominate Neil Gorsuch — a reliable conservative in the mold of Scalia. Gorsuch, who was confirmed in April 2017, delivered with the deciding vote in Janus.

“Today’s decision is a landmark victory for rights of public-sector employees coast-to-coast that will free millions of teachers, police officers, firefighters and other public employees from mandatory union payments,” said Mark Mix, president of the National Right to Work Legal Defense Foundation in an emailed statement. “While this victory represents a massive step forward in the fight to protect American workers from forced unionism, that fight is far from over.”

Currently, about 10 percent of the CTA’s approximately 325,000 members have chosen not to join the CTA and instead pay only agency fees — about $650 compared with about $1,000 that full members pay. The remaining $350 pays for lobbying and campaigning at the local, state and federal levels.

In the June primary, for example, the CTA contributed about $1 million in independent expenditures for Democratic gubernatorial candidate Gavin Newsom and $2 million for state superintendent candidate Tony Thurmond.

The worry for CTA and other public employee unions isn’t just over losing the agency fees from non-union members but also the defection of full-paying members. That has happened in several states where legislatures repealed laws requiring agency fees.

In Wisconsin, union membership fell by more than half and about 20 percent in Michigan within several years after those states eliminated agency fees, according to an analysis in the fall 2018 issue of Education Next by Bradley Marianno, an assistant professor of educational policy and leadership at the University of Nevada, Las Vegas, and Katharine Strunk, a professor of Education Policy at Michigan State University.

“If trends from Wisconsin and Michigan are any guide, teachers’ unions may be permanently crippled in the wake of Janus. They will lose membership, which will result in steep declines in revenues, which in turn may curtail their ability to affect the policy process,” they wrote.

Leaders of public employee unions acknowledge that in the post-Janus world they will have to spend a lot more time and money on grassroots organizing efforts to retain members. Publicly they are optimistic that the worst fears won’t materialize and say they’ve been laying the groundwork for ambitious organizing campaigns.

“We are making investments with early career educators, letting them know the professional supports we provide for them and about our social justice work,” said Lily Eskelsen García, president of the National Education Association, the nation’s largest teachers’ union. “That is where we have to put our emphasis.”

In explaining its decision in Abood 40 years ago, the Supreme Court said that public employers benefit from “labor peace” by negotiating with an exclusive union that collects fees to represent all workers.

In overturning Abood, Alito wrote that the court’s “fears of conflict and disruption” from multiple unions serving employees “have proved to be unfounded.” In 28 states without agency fees, unions continue to serve millions of workers without chaos, even when less than a majority are members, he wrote.

But union leaders have pointed to the chaos from teacher walkouts this year in a half-dozen states to make the opposite argument. All took place in right-to-work states with weak unions and low teacher pay — evidence they cite to make their pitch for union solidarity.

Unions have also been lobbying hard in Sacramento. State budget trailer bills in 2017 and this year have included laws aimed at helping unions recruit and retain members.

A 2017 trailer bill included a provision requiring government agencies to negotiate the details of when, where and how unions will have access to recruit new employees and to provide them with job titles and contact information for all employees at least every 120 days.

One of this year’s trailer bills takes things a step further — prohibiting government agencies from publicly disclosing information about the site and time of new employee orientations. The purpose behind these bills is to keep conservative activist organizations like the Freedom Foundation from distributing anti-union leaflets at work sites and contacting new employees before unions can to try to convince them not to join.

Leave a Reply to Sharlett