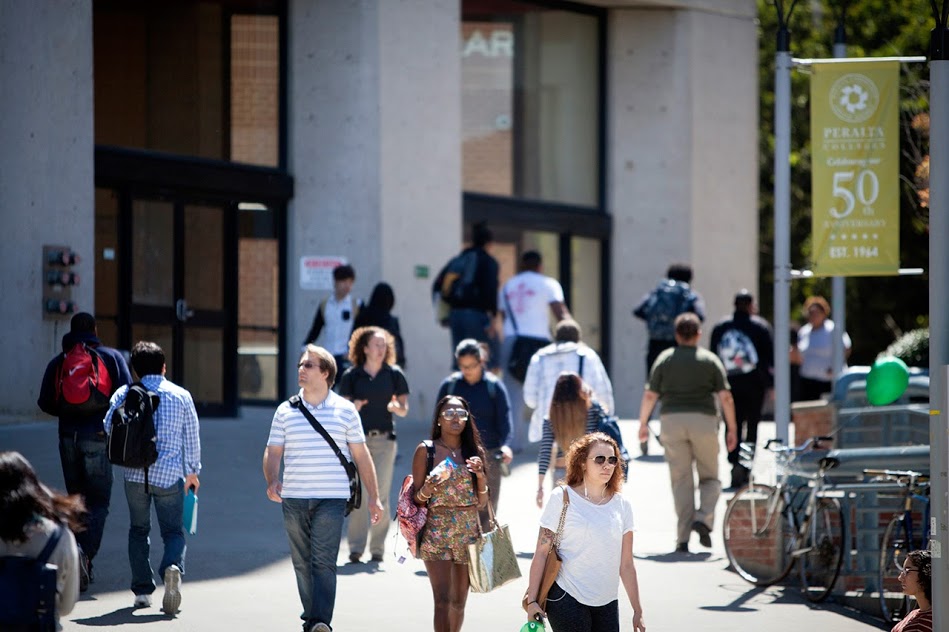 Gov. Jerry Brown’s proposal to link over $3 billion in funding for California’s community colleges to the number of low-income students they enroll and to student outcomes in general is coming under increasing scrutiny — and is likely to face more in the coming months.

Currently California’s community colleges receive nearly all of what are called “general-purpose” funds — $6.2 billion in 2017-18 — based on the number of enrolled students. The governor’s plan would instead make just half of those dollars depend on student enrollment. A quarter would fund colleges based on the number of degrees or certificates students earn or who are ready to transfer. Another 25 percent would be tied to the number of students receiving certain kinds of financial aid.

While largely endorsing Brown’s new funding formula, the Legislative Analyst’s Office is recommending that Brown tie more of these funds to the academic outcomes of low-income students as an incentive to ensure they succeed, something his proposal currently does not do.

Assemblyman Jose Medina, D-Riverside, chair of the Assembly Higher Education Committee, said he plans to hold a committee hearing about the proposal “so that we can look at it with more detail.” He said the proposal is worrying some community college leaders because of the uncertain impact it would have on the funding they receive. “This is a big change,” Medina said.

He also worried about Brown making his funding proposal part of the budget process rather than going through the normal legislative process. “By just putting it in the budget,” he said Brown is “circumventing the Legislature being able to fully discuss his ideas.”

What might influence how Brown’s proposal will be received in the Legislature is the experience of more than 30 other states that have some version of what Brown is proposing — what are called “performance-based” or “outcome-based” funding plans for their public colleges and universities.

Most apply these plans to both their community colleges and four-year public universities. If Brown’s proposal gets approved by the Legislature, California would join five other states that apply this funding approach only to their community colleges. According to the National Conference of State Legislatures, the others are New York, North Carolina, Texas, Washington State and Wyoming.

Brown’s plan, included in his proposed budget that he issued in January, targets about $6 billion that California’s 114 community colleges receive out of their total budget of about $15 billion.

Currently they receive these general purpose funds based almost solely on the number of students they enroll. Brown wants to allocate those funds  in the following ways, according to the accompanying “trailer bill” released Feb. 1: 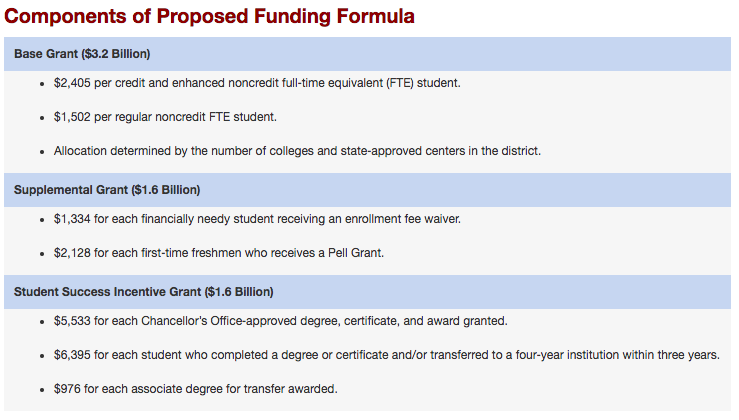 The LAO is recommending that more money in this last category be sent to colleges where low-income students are showing positive outcomes. “We will take their suggestions under consideration,” said H.D. Palmer, spokesman for the California Department of Finance, referring to the LAO’s recommendations.

Brown has also included what is called a “hold-harmless” provision for 2018-19 that would prevent any college district from receiving less apportionment funding than it did in 2017-18. In 2019-20 and after, districts would receive at least the per-student funding they would have received in 2017-18.

One key condition of the proposed formula is that all districts adopt the Vision for Success document the California Community Colleges Board of Governors approved last summer. That document set aspirational goals for degree completion and wage gains for career technical education students.

While different in some important respects, the plan bears similarities to Brown’s landmark Local Control Funding Formula for K-12 schools. That formula targets additional funds for school districts based on the number of low-income and other high-needs students they serve. But unlike the K-12 funding formula, Brown’s community college plan would also fund colleges based on several measures of student performance.

Some researchers of performance-based funding plans in other states say that there is a danger that linking funding to student academic performance could unfairly reward schools that have more students who come from more affluent households and are more likely to graduate anyway — and penalizes colleges that serve needier populations. There’s a risk of “favoring colleges that already are doing well on those metrics,” said Nicholas Hillman, a professor of higher education policy at University of Wisconsin-Madison.

In 2015, the National Conference of State Legislatures recommended that any funding plan based on student performance focus also on students with greater economic needs. The organization advised states to “include a measure to reward colleges that graduate low-income, minority” and older students.

Brown’s proposed funding formula attempts to address this concern. As his administration explained in its January budget proposal, the formula is intended to “encourage access for underrepresented students, provides additional funding in recognition of the need to provide additional support for low-income students and rewards colleges’ progress on improving student success metrics.”

While some states have linked funding to student outcomes in some form since the 1990s, the practice really took off after 2008 as states wanted to maximize the impact of their funding during the Great Recession.

The concept of linking funding to student performance is not entirely new in California. Beginning in the late 1990s, the Legislature initiated a program called Partnership for Excellence, which provided supplementary funds — up to $300 million in its final year — in exchange for community colleges promising to improve student outcomes on an array of measures. But the program was never fully implemented, and in 2005 for a range of reasons it was scrapped altogether.

Amy Li, a professor of higher education at Northern Colorado University in Greeley, said that states using outcomes-based funding models are in effect telling colleges “if we give you money for this particular goal then you as an organization should do whatever you need to do … to produce the outcomes that are important to the state.”

Performance-based funding models across the country vary considerably. In Tennessee, colleges and universities receive 85 percent of their state money based on student outcomes. In some respects, the state’s approach is similar to Brown’s, though there are differences: Tennessee’s community colleges are also judged on the extent to which students find jobs after they graduate.

Texas began using a funding formula tied to outcomes in 2014-15. It bases roughly 10 percent — or $180 million — of state money for community colleges (excluding faculty benefits) on how well students do. The formula assigns districts points for various student milestones, such as completing remedial education classes, earning a degree or transferring to a four- year college. Each point brings an extra $172 per student to the college.

Whether the formula has spurred improvement in his state is “the million-dollar question,” said Dustin Meador, who heads government relations at the Texas Association of Community Colleges, representing the state’s 50 community colleges. The association supported the formula.

There is some evidence that Texas colleges are responding positively to the new formula. For example, colleges have earned points for improvement at a faster rate than their enrollment has grown, Meador said. Colleges, he added, have been simplifying students’ academic roadmaps that they must follow to earn a degree or transfer, which may explain some of the improvement.

In some cases, colleges that lost funding because of declines in enrollment were able to maintain their funding levels anyway because of the extra money they received based on improved student outcomes.

Researchers of performance-based funding also point to evidence that the performance-based formulas can spur community colleges to graduate more students with certificates that take a shorter time for students to earn, such as those in auto mechanics, biotechnology or landscape design, than students earning associate degrees. Those take a minimum of two years to earn.

In his analysis of performance-based funding formulas in place for community colleges in Ohio, Tennessee and Washington State, Hillman found that on average the number of certificates and other credentials earned by students went up, while the number of associate degrees stayed flat on average. Hillman thinks that’s because it’s easier to produce more degrees “when they can be done in a relatively short amount of time.”

Others say the results are more mixed. In some states with performance-based funding formulas for community colleges, students have earned more associate degrees, while in others they have earned fewer.