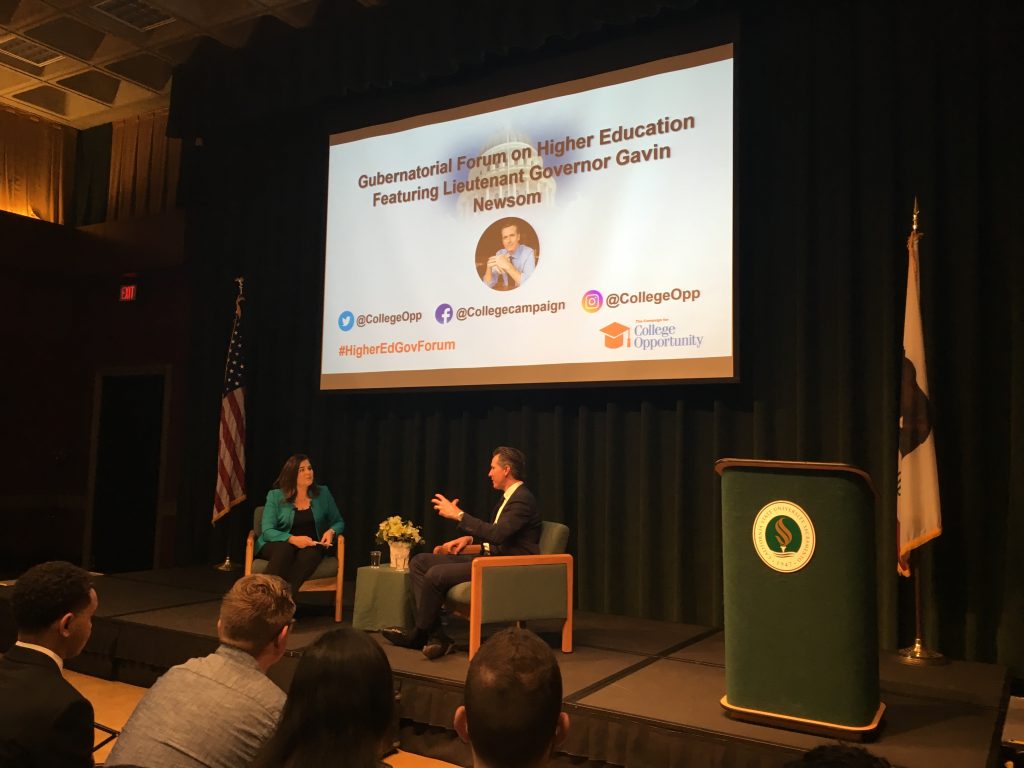 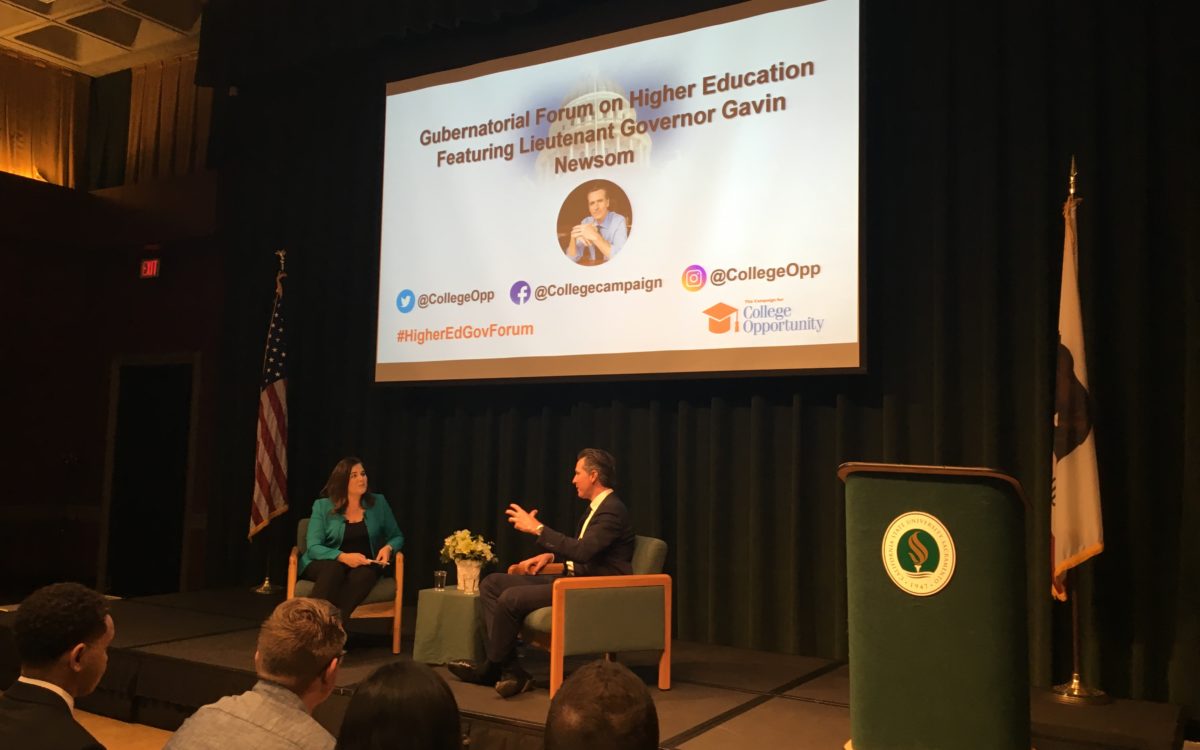 “It’s code red — it’s serious,” Newsom told reporters. “We are not only going to see tuition increases, but we’re also going to see tens of thousands of qualified California students rejected, because we don’t have capacity. That’s just tragic.”

Newsom, who is running for governor and is leading his opponents according to a recent Public Policy Institute of California poll, said he supports Gov. Jerry Brown’s plan to tie some funding for California’s community colleges to student performance. He also indicated he was open to expanding that model of funding to the University of California and California State University systems.

Newsom spoke about his plans for higher education at Sacramento State University on Thursday in a conversation with Campaign for College Opportunity President Michele Siqueiros. Former Los Angeles mayor Antonio Villaraigosa and State Treasurer John Chiang will speak at forums hosted by the organization in Los Angeles next month.

During his talk, Newsom touted his experience serving on the governing boards of California’s four-year university systems and said he wants to bring a “new energy around higher education” to the governor’s office.

He warned, though, that the 3 percent funding increases Brown proposed for the state’s four-year university systems in the 2018-19 budget will not generate enough money to avert tuition increases or expand their enrollment capacity. Newsom has opposed tuition increases as a member of the UC Board of Regents. As the lieutenant governor, Newsom is an ex-officio member of the board.

The state has a projected $6.1 billion surplus in its current budget and Newsom said it can afford to spend more on its college systems.

Brown’s 2018-19 budget proposal would raise general fund dollars for the University of California to $3.5 billion and $3.8 billion for California State University.

Both systems last year hiked tuition for the first time in six years, and the UC and CSU boards of trustees are poised to approve tuition increases in May. UC has raised the possibility of another increase of $342 on top of the current $12,630 tuition and mandatory system fees for California undergraduates, not including room and board. Cal State is considering a $228 rise, above the current $5,742 tuition for California full-time undergraduates.

“The original sin on all of this is withering state funding,” Newsom said. “We need to provide access to every eligible Californian, as a foundational goal. In order to do that we need a significant increase in investment from the state of California.”

Speaking with reporters after the event, Newsom said he wants additional funding for public universities to be the Legislature’s “top priority” in budget negotiations.

Newsom refrained from pointed criticism of the governor. But he did say that if he were in Brown’s position, he would have proposed bigger funding increases for the universities, which is what he would do if elected.

“I would appropriate more money to begin with,” Newsom said. “That’s not going to be an issue if we’re successful in November — you’ve got my word on that.”

Newsom also pledged in other comments to reestablish a statewide coordinating body for higher education much like the former California Postsecondary Education Commission, improve data systems to track student outcomes and make the governing boards of California’s public colleges and universities more diverse if he is elected.

Brown’s proposal to change how community colleges are funded was not raised during Thursday’s forum, but in response to a question from EdSource, Newsom said he backs it.

More than 30 other states link some or all of their funding for public colleges and universities to student performance. The formulas vary, with some looking at how many students earn degrees and whether they find jobs.

Newsom also told EdSource that he wanted to see reforms in funding for the state’s college and university systems.

Brown in 2013 tried to institute a performance-based funding model, but the UC and CSU systems balked. Lawmakers scrapped the idea in the final budget.

“I know the UC Regents, CSU and the Board of Governors do not like that,” Newsom said of tying funding to performance. “They criticized the governor for that. I disagree with them — we need to see reforms in these three systems, and the governor is right about advancing reforms.

“The difference is … I would be a little bit more indulgent of encouraging those reforms with additional resources.”