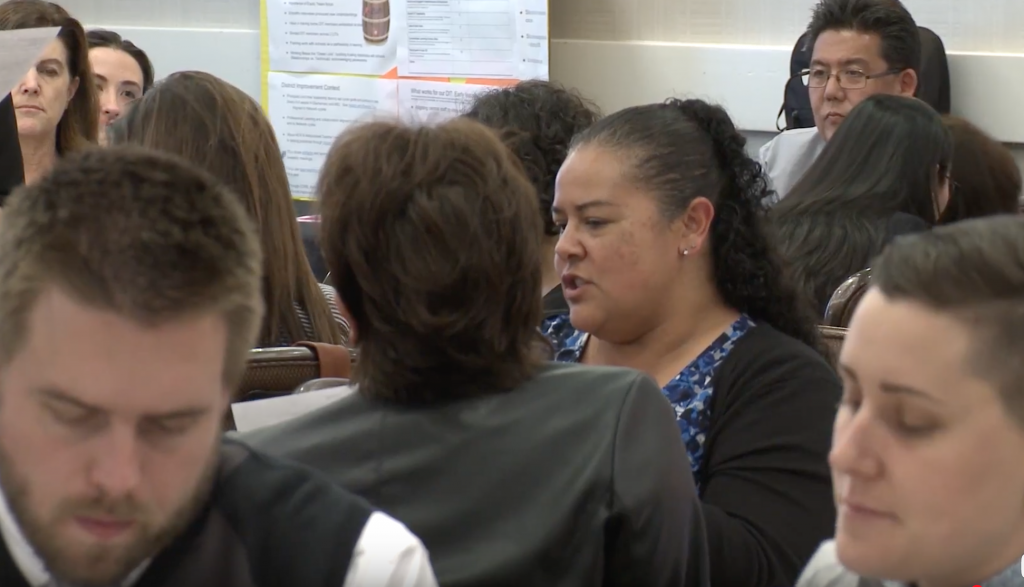 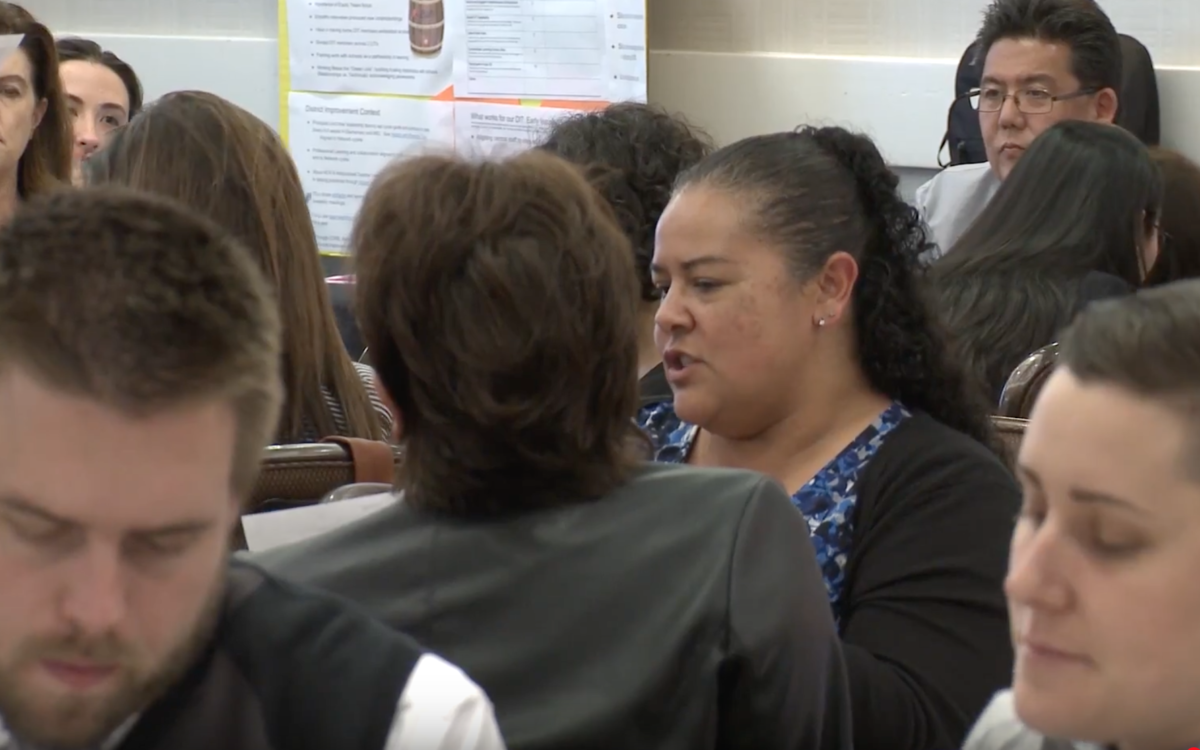 Courtesy of CORE Districts
Teachers from Fresno Unified and other CORE districts discuss strategies at a school improvement conference.

Courtesy of CORE Districts
Teachers from Fresno Unified and other CORE districts discuss strategies at a school improvement conference.

In a push to improve the high school graduation and college success of African-American, Latino and low-income students, the Bill & Melinda Gates Foundation announced its  first set of grants Tuesday under a new initiative to support collaboration among middle and high schools nationwide.

California will be a major beneficiary of the initiative. Of the $92 million in grants announced today, about $40 million will go to a half-dozen nonprofit organizations in California, in part a reflection of the large number of low-income students from diverse racial and ethnic backgrounds in the state.

The foundation is calling its new initiative “Networks for School Improvement.” The grants represent a significant shift away from a decades-long strategy of promoting large-scale initiatives like breaking up large schools into smaller units, linking teacher evaluations to students’ test scores and introducing the Common Core standards in English and math.

Its focus now is to support networks of schools and districts as they identify common problems, like high suspension rates of middle schoolers, and then use data to come up with their own “locally driven solutions.” The networks would then build on that process to tackle additional problems.

Robert Hughes, director of the Gates’ K-12 U.S. Education Program, said the 19 grants announced today represent only the first round of grant-making. Gates, the largest foundation funder of K-12 education, will spend $460 million on school networks through additional rounds of funding.

The goal, he said, is to enable “groups of schools to collectively solve problems.”

The organizations receiving grants today were chosen from 530 applications submitted to the foundation, after a rigorous selection process over several months.

The CORE districts will get $16 million over 5 years.  The districts include  Fresno Unified, Los Angeles Unified and Long Beach Unified, three out of the four largest districts in the state.

Bill Gates singled out the CORE districts’ work in school improvement — and progress by Fresno in particular in successfully encouraging more students to apply to college — when he first described the initiative in a speech in Cleveland last fall to the Council of Great City Schools.

Rick Miller, CORE’s executive director, said that one goal of the new grant will be to figure out how to expand solutions devised by individual districts to other districts. CORE will invite national experts on keeping students on track for college, like the Network for College Success in Chicago, another Gates grantee, to help figure out how its successes in Illinois might work in a California context. “We hope this can add to the collective knowledge in the state,” he said.

The California Education Partners, based in San Francisco, will receive $12 million over 5 years. Its  California Learning and Language Innovation collaboration, or CALLI,  has created networks of small and medium-size districts to work on early elementary grades literacy, instruction of academic language in middle and elementary schools, and high school math.

Through the new grant, 18 districts with 50 schools will take on  two projects: ensuring 8th-graders are on track for high school, and high school students are ready for college. The metrics will be math and English language arts scores on standardized tests and the completion rate of the courses, known as A-G, needed for admission to CSU and UC schools. But the improvement process will delve into related local issues affecting achievement, such as  how teachers are recruited and observed, how resources are distributed and how data is used and shared, said Phil Halperin, a senior partner at California Education Partners

High Tech High Graduate School of Education will get $10.3 million over 5 years to create a network of 30 district and charter schools in Southern California. They will  examine obstacles to enrollment in postsecondary programs, such as mistakes in financial aid applications, errors in notification and need for counseling over the summer before freshman year. California community colleges, Cal State and the University of California will be partners in the work, said Ben Daley, High Tech High Grad School’s provost.

Other California based grantees are:

All three will be eligible to apply for additional funding in future rounds.

Gates’ investment in California organizations is not altogether surprising. California has the nation’s largest concentration of low-income, minority students. Nearly 60 percent of California’s 6.2 million are low-income; 54 percent of them are Latino and 5 percent are African-American.

Gates is also familiar with all of the six California grantees, which currently have or have received funding from Gates.

In tune with California’s local control

Gates’ focus on school networks parallels California’s shift to locally based decisions on spending and school improvement that emphasize collaboration among districts and county offices of education.

Over the past year, all of the county offices sent administrators to a week-long training in school improvement techniques led by the Carnegie Foundation for the Advancement of Teaching. In its state plan for the federal Every Student Succeeds Act, explaining how it will turn around the lowest-achieving schools, the State Board of Education reiterated a commitment to district networks and a process of continuous improvement.

Using initial state funding, a new state agency, the California Collaborative for Educational Excellence, set up 54 district networks to work on various issues in common. In the new state budget, Gov. Jerry Brown included $13 million to establish a network eventually involving 80 districts to work collectively on how to expand parental involvement in school.

For the most part, though, the state is relying on districts and counties to create networks on their own. California foundations, including the S.D. Bechtel Jr. Foundation, the Stuart Foundation and the Silver Giving Foundation, have responded by seeding the larger, sustained efforts, like CORE and California Education Partners.

“This is a good confluence of events,” Halperin said. “We had empowered local decision makers; now we can build up local capacity consistent with what the state has been trying to do.”

In an email, Hughes wrote that Gates is aware of the direction that California has taken and will be watching.  “California’s decision to support continuous improvement is something we will be exploring going forward,” he wrote.

Relying on school networks to lead systemwide improvement is a big bet — for Gates and California. A report issued Tuesday by the Center for Public Research and Leadership at Columbia University, which Gates commissioned, concluded that studies of education networks had found improvements in collaboration and the use of data, and stronger foundations for trust and shared leadership. But few of the 34 studies examined found  a relationship between networks and improved student performance.

Hughes acknowledged that continuous improvement networks have shown impressive results in health care and social services but so far only “glimmers of progress” in education tied to student success. The foundation will use independent researchers to study network grantees’ progress and will be transparent about the findings, he said.