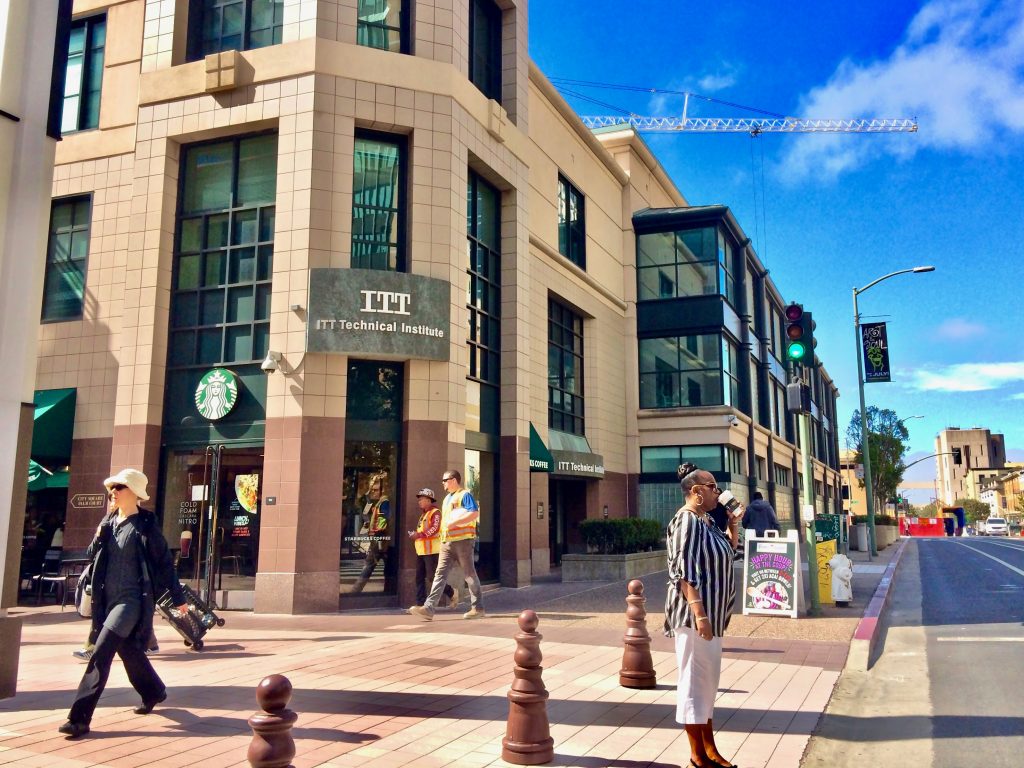 School closures in California affect tens of thousands of students 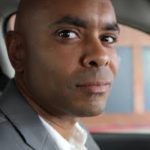 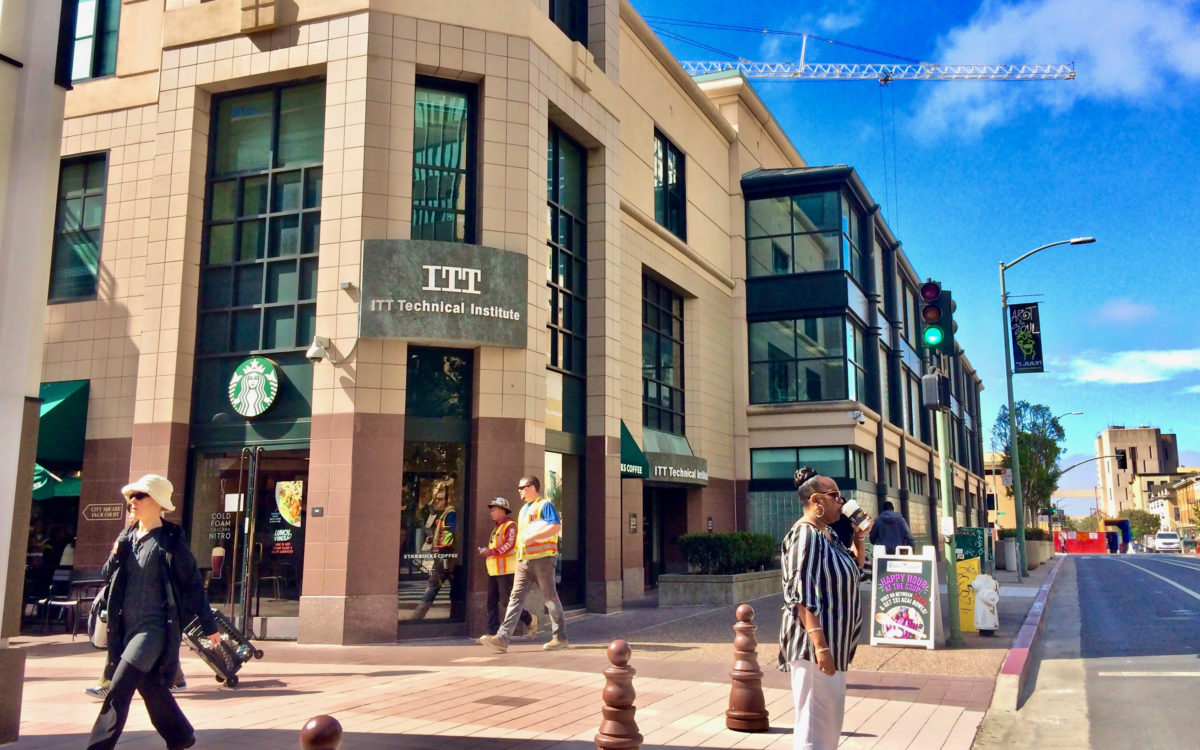 The large number of California students who attended for-profit colleges at the time of their closure suggests many more may be eligible for student loan debt relief than have applied under the federal government’s current policy, an EdSource analysis shows.

The process for student borrowers to cancel their federal education loan debts was created amid a series of lawsuits against Corinthian Colleges Inc. that forced the California-based for-profit college chain into bankruptcy and closure in 2015.

Enrollments at for-profit colleges during campus closures since 2009 indicate that many more students may be eligible for debt relief under current federal rules. Between 2009 and 2017, 90,307 students were enrolled at California-based for-profit campuses during the year of their closure, reflecting the vast scale of potential claims for debt cancellation.

Federal education debt cancellation guidelines are currently under review by U.S. Education Secretary Betsy DeVos. On Thursday, Becerra’s office denounced DeVos’ office for delaying implementation of new rules mandating for-profit colleges to produce graduates who earn enough to repay their federal debts. Those guidelines and others known collectively as borrowers’ defense rules, provide the grounds by which students can apply for debt relief if they used taxpayer funds to attend colleges that committed fraud or inadequately prepared students for employment.

Students attending colleges that close may also be released from federal debt obligations under so-called closed school discharge rules, if they attended within four months of closure and cannot transfer to comparable academic programs within three years. The government provides a variety of federal debt relief according to the facts of individual cases. Depending on their situations, student borrowers’ federal debts may be reduced, canceled or modified in other ways. Some student borrowers challenge their education debts’ tax liabilities or service terms.

By March there were 127,817 backlogged debt relief claims nationwide at the U.S. Department of Education. That’s a 29 percent increase over the 98,868 claims submitted by August 2017, according to an analysis of Education Department data by The Century Foundation, a Washington D.C.-based public policy think tank. The same trend was evident in California, where 35,282 student borrowers applied to cancel federal loans by March, compared to 29,516 claims submitted by August 2017.

Borrowers’ defense rules cover all institutions receiving federally backed student aid, but the claims process — created in response to Corinthian’s collapse — is still driven by former and current students of for-profit colleges. For-profit colleges are the subjects of more than 98 percent of claims based on these rules.

DeVos suspended borrowers’ defense and other debt cancellation processes pending her policy review and indicated she intends to issue more restrictive guidelines. In May, Magistrate Judge Sallie Kim of the U.S. Northern District of California in San Francisco barred DeVos from replacing the current policy with a formula that would have cancelled only a portion of students’ debts based on their estimated potential income.

“In recent years we’ve seen an upsurge of predatory actors in higher education,” said Tariq Habash, a researcher at The Century Foundation. “In the 2000s, leading up to and during the Great Recession we saw the biggest explosion ever of for-profit colleges.”

The expansion of for-profit colleges and the parallel growth of student debt are fundamentally transforming higher education and the American economy. The U.S. Federal Reserve reported in March that Americans owed $1.407 trillion in outstanding student loan debt in March, compared to $986 billion five years ago, making it the second-largest category of household debt after mortgages. About 81 percent of student debt is owed to the federal government; the rest is owed to private banks.

In recent years, for-profit student enrollments in California declined from their peak in 2011, when 368,679 students attended for-profit colleges compared to 2016, when 207,890 were enrolled. They declined for a range of reasons, including the impact of the Great Recession on loan markets, more vigorous state and federal oversight and conversions of some for-profit colleges to non-profit institutions.

“In recent years we’ve seen an upsurge of predatory actors in higher education,” said Tariq Habash, a researcher at The Century Foundation. “In the 2000s, leading up to and during the Great Recession we saw the biggest explosion ever of for-profit colleges, and in recent years, prior to the appointment of Betsy DeVos as Education Secretary and President Trump’s election, there was a crackdown.”

For-profit colleges, which include storefront campuses and online learning, are also more likely to serve more students of color, poor people, older learners and first-generation students than their nonprofit peer institutions, according to Constance Iloh, a professor of education at UC Irvine who has studied for-profit colleges and has authored a new model for 21st century college-going.

“Community colleges have also built a similar model to serve non-traditional students and they haven’t had anywhere near the instances of fraud, so clearly it can be done,” said Clare McCann, a federal policy researcher for New America, an advocacy and research organization in Washington D.C. “I think that additional profit motivation drives that behavior and you see abuses in marketing practices that are the source of most of the borrowers’ defense claims.”

Federal student loan relief rules have been in place since the 1990s, but no effective process existed to apply them until the collapse of Corinthian Colleges, which ran 100 campuses and served more than 100,000 student borrowers at its peak.

Former Corinthian students have submitted 85,412 applications and account for about two-thirds of all claims. Based on pervasive claims of predatory lending and substandard education services, the California Attorney General’s Office won a $1.1 billion judgment against Corinthian in 2016 and negotiated settlements with Corinthian loan servicers to forgive $118 million in student loans.

The growing number of non-Corinthian claims and continuing closures of for-profit campuses in California suggest that potential applications for debt cancellation far exceed those already filed.

Earlier this month, prospective students who visited websites owned by Dream Center Education Holdings, LLC., of Pittsburgh, were greeted with notices that the company’s California campuses, including Art Institute-branded campuses in San Bernardino, San Francisco, Santa Ana, Sacramento and Argosy University-branded campuses in Alameda, Ontario and San Diego, will stop accepting enrollments by the end of the year.

Company representatives did not respond to EdSource’s interview requests, but in other public statements they described the closures as a re-organization intended to strengthen the company’s performance. Dream Center owns 62 campuses nationally, serving over 50,000 students.

Dream Center acquired the campuses slated for closure in 2017 from Education Management Corporation, which filed for bankruptcy in late June after agreeing to pay penalties and forfeit debts worth over $200 million to settle lawsuits brought by former students and regulators. Educational Management Corporation allegedly falsely advertised graduates’ employment rates and salaries.

Most borrowers’ defense claims begin this way, said New America’s McCann. “Students have to provide evidence that schools broke laws and lawsuits provide pretty good evidence of that,” she said.

Jana Bergevin, 32, of Pleasant Hill, graduated from Art Institute of California, San Francisco in 2011 with a master’s of fine arts degree. Bergevin said she chose to attend Art Institute based on the school’s marketed ability to offer industry-specific courses in feature animation. Despite earning high marks, Bergevin failed to find animation studio jobs and settled for a career in computer games design.

“Art Institutes lied about job placement rates and jobs they said we could get and the industry contacts they said they had,” said Bergevin, who said she owes $167,000 in federal student loans. “I saw the Corinthian lawsuits and borrowers’ defense claims and I said, ‘Oh, I’ve got to get on that bandwagon,’ because I was defrauded too. What I studied for is not what I do now.” 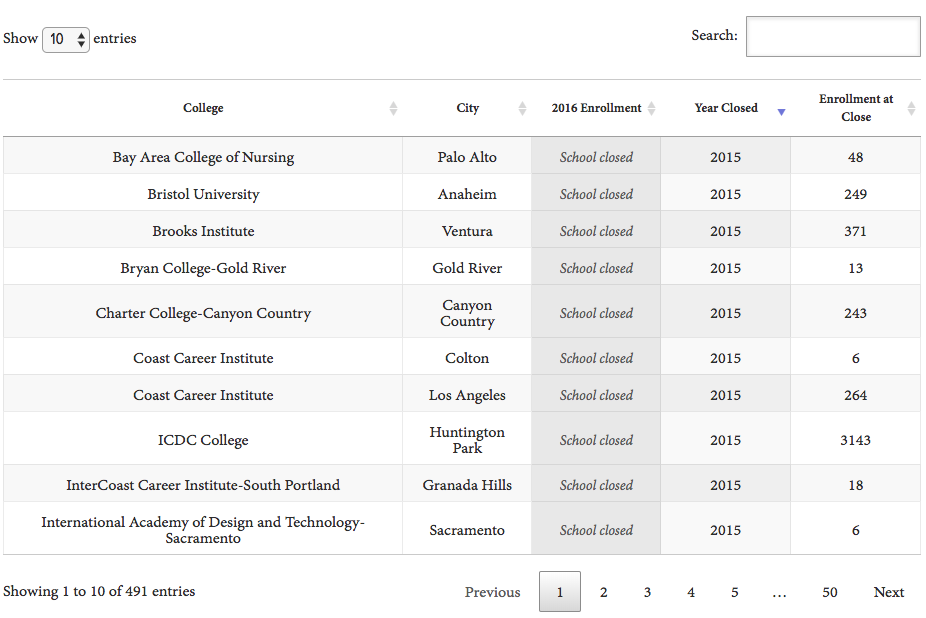 The Education Department rules on school closure allow student borrowers to apply for cancellation of federal education loans if they were enrolled within four months of the school closing. Closures are especially problematic for students at for-profit colleges because they are less exposed to educational resources than peers at other kinds of institutions. For-profit colleges also have a poor record of preparing students to transfer to public institutions, the destination of choice for many students leaving closed for-profit schools. In 2017, the U.S. Government Accountability Office reported that students transferring from for-profit schools into public colleges typically were unable to use 94 percent of course credits they earned at those schools. That compares to students from all colleges who were unable to use 43 percent of course credits they had earned when they transferred schools.

Only a fraction of students who experience such disruptions apply to have their federal debts cancelled. Education Department officials noted that 43,268 students attended schools that closed between 2011 and 2015. Of those, only 9,606 of them applied to have federal loans cancelled and 95 percent of their applications were approved.

Noting high approval rates, the department said it was concerned that borrowers who attended schools that closed are “unaware” that they might be eligible for loan relief and do not apply for that reason.