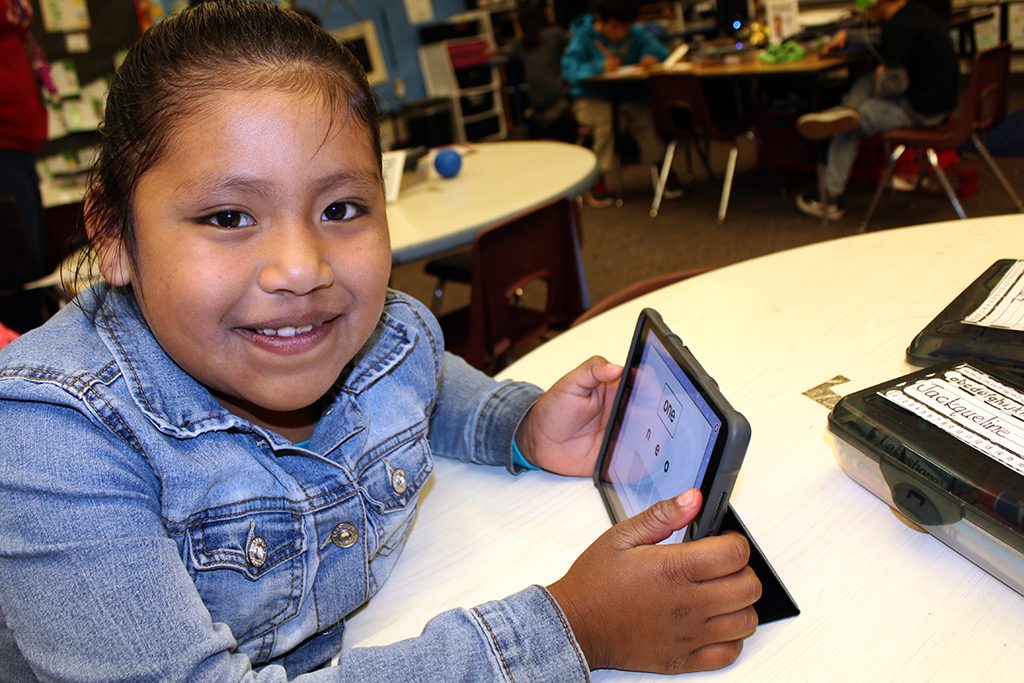 In 2016, heading into her 15th year as a kindergarten teacher, Kristy Caesar knew what to expect from a room full of 5-year-olds.

But what greeted her on that first day of school last year was an eye opener — she had 21 kindergartners and only four had attended preschool. Eighteen students couldn’t recognize a single phonetic letter sound, such as the sound “A” makes.

“It was so challenging; they were months behind,” said Caesar, who teaches at Kennedy Elementary School in Lindsay, in California’s Central Valley. She recalled thinking, “Something needs to change. I can’t keep getting learners who have never gone to preschool.”

A year later, things did change.

This past fall, the Lindsay Unified School District, in a small farming community in Tulare County, implemented universal preschool, meaning every child from birth to 4 years old, regardless of family income, can attend a program in the district for free. In Lindsay, where orange orchards surround elementary schools, more than a third of the student population are children of migrant farm workers. Of the 4,191 students in the district, 91 percent are from low-income families and more than 50 percent are English Learners, according to 2016-17 data from the California Department of Education.

No statewide agency tracks the number of California school districts that provide universal preschool programs and early education advocates say they don’t know how many there might be. Some programs that are titled universal preschool may have income restrictions or are provided to specific populations, such as children from low-income families. But through a combination of funding sources, Lindsay Unified found a way to provide free preschool for all children.

From 2003 to 2010, the district was able to provide preschool to every child through a combination of state and district funds and support from First 5 Tulare County, part of First 5 Association of California, a nonprofit organization that funds programs for children birth to age 5. Christina Sauceda, chief program officer for First 5 Tulare County, said the funding was part of a school readiness program in the district. The organization stopped all funding in 2010 for the school readiness program in Lindsay, although it continues to fund family resource centers in the area and preschool programs in other rural districts in the Central Valley.

The decision to stop school readiness funding in Lindsay was part of a strategic process. First 5 Tulare County shifted its focus to create more health and family strengthening services, such as the resource center in Lindsay. First 5 Tulare still funds preschool programs through its school readiness initiative in four districts in the Central Valley, including Traver, an area Sauceda describes as geographically isolated.

A combination of factors led the district back to restoring universal preschool. During kindergarten registration some students arrived who had never attended preschool, said Lindsay Unified’s preschool director, Cheri Doria. Those included families who didn’t qualify for subsidized programs or couldn’t afford the limited number of private preschool options available.

In addition, the district received detailed feedback from kindergarten teachers, like Caesar, who worked with students every day and noticed stark differences among those who attended preschool and those who did not. “I showed the data to Cheri and the district presented it to the school board and it was one of the factors,” that led to preschool for all, Caesar said.

While there is a consensus among early education advocates on the importance of preschool — especially for those students who are from low-income families and have limited opportunities to be in a formal education setting before kindergarten — there is less agreement on how to pay for it. Many school districts across California use a combination of funds to pay for preschool programs, such as California State Preschool funding, Migrant Education Program funding for children of migrant farm workers with seasonal jobs in industries like agriculture, and K-12 special education funding, which school districts and county offices of education also use to serve children with developmental disabilities in preschool. Lindsay Unified uses those funds and has included additional funding in its Local Control Accountability Plan.

Local Control Accountability Plans, or LCAPs, spell out how a district plans to spend money it receives through the Local Control Funding Formula — California’s school funding system that grants districts greater decision-making powers over how to use state funds. It also gives districts additional funds to serve high-needs students: low-income children, English learners and foster children. Lindsay Unified used $150,000 in LCFF funds this year to add 48 preschool slots in 11 programs across the district.

Early education advocates, such as Children Now, based in Oakland, have advocated using LCFF funding for preschool. In a 2014 policy document titled “Leveraging the Local Control Funding Formula: Making the Case for Early Learning and Development in Your School District,” Children Now encouraged schools to include preschool funding in their LCAPs, but acknowledged it’s a challenge because districts have other competing priorities.

In Lindsay Unified, Doria said the choice to use LCAP funding came down to one thing — the data.

Last year, Caesar tracked each of her 21 kindergartners throughout the school year and used detailed spreadsheets to compare student performance. Using the Developmental Reading Assessment, which allows teachers to observe and record changes in students’ reading levels, Caesar found that students who attended preschool were reading at a 1st-grade level by the end of the year. Those who had not attended preschool were struggling to identify key phonetic sounds and words. The district had also previously conducted its own research on student performance that compared those with preschool experience to those without from kindergarten through 3rd grade. The differences were significant, Doria said. The district used the Desired Results Developmental Profile, an assessment tool commonly used to determine a student’s readiness for kindergarten.

“Our district has always known it’s important but until they saw the data, it was hard to know exactly how important,” Doria said about expanding preschool. “But when they ran the data and analyzed the reports, the district was like ‘Oh yeah, preschool is making a difference’ and it was easier then to say let’s put the LCAP funds towards that.”

Doria said universal preschool has also helped them to bridge the financial gap for families that make too much to qualify for state subsidized programs or do not meet the criteria for migrant preschool programs. Some surrounding communities have more preschool options but in Lindsay, early childhood education programs are limited outside of the school district, Doria said.

Now with the change, “whoever walks through the door, we will find a place for them,” Doria said. “And that’s the whole point … we are empowering our learners to start off on the right foot and they come here happy and ready to learn.”

The district also provides transportation to and from its all-day preschool programs. The service benefits parents who are migrant farm workers and are unable to pick up their children from a half-day preschool program, Doria said. The migrant preschool serves 48 students for a full day, which is 8:30 a.m. to 3 p.m.

Caesar said in a high-poverty district such as Lindsay Unified, it was difficult for some families who didn’t qualify for subsidized preschool to spend money on preschool, especially those who could leave their child with a relative, she said. “It was just too much for them,” she said. “You can’t sit there and say you have to send your child to preschool if a parent really can’t afford it. But now I’m excited because I can say you can send them, it’s free.”

Still, not all parents are convinced preschool is the best setting for their child. Doria said there are still misconceptions that a preschool environment is too academic and not a critical step before kindergarten. Some parents also think their children are too young and are concerned they will end up disliking school.

But Doria said preschool is not about speeding up the academic process. It’s about allowing children to learn and socialize in a fun environment. It’s also about ensuring children are able to transition well socially, emotionally and academically to kindergarten, she said.

On a recent Tuesday in Caesar’s kindergarten class, minus a recess break and 15 minutes for dancing and singing, the 27 students in her class spent the remainder of the day in small groups and rotated to different activity centers focused on counting, reading and educational games. On this particular day, the class exercise involved working toward goals to improve writing.

Under Lindsay’s performance-based learning program incorporated more than 8 years ago in the district, students kindergarten through 12th grade select daily academic goals to practice and are aware of whether they are proficient at a particular task or need improvement. Performance-based learning is student-centered, meaning students take an active role in what they are learning and can only advance to a more difficult concept after they demonstrate they fully understand the current one. For instance, being able to spell and read kindergarten-level words before advancing to 1st-grade-level words.

In kindergarten, proficiency is represented by colors. Every student in Caesar’s class knows what meaning corresponds to each color. Green means, ‘I can do it,’ yellow means ‘I can almost do it’ and red means ‘I need help.’ The walls are decorated with signs that state student goals like, “I can say letter sounds,” “I can tell a sentence to stop” and “I can write an informational piece.”

Caesar said the best part of her job is watching students set a goal to learn a new word or a new sound and move their name off a chart to the next level. While the district is committed to teaching students at their level of ability and helping those who are behind, it is still critical that students enter kindergarten ready and that means attending preschool, Caesar said. “We still want them to be on pace and the majority of children who didn’t go to preschool were not,” she said.