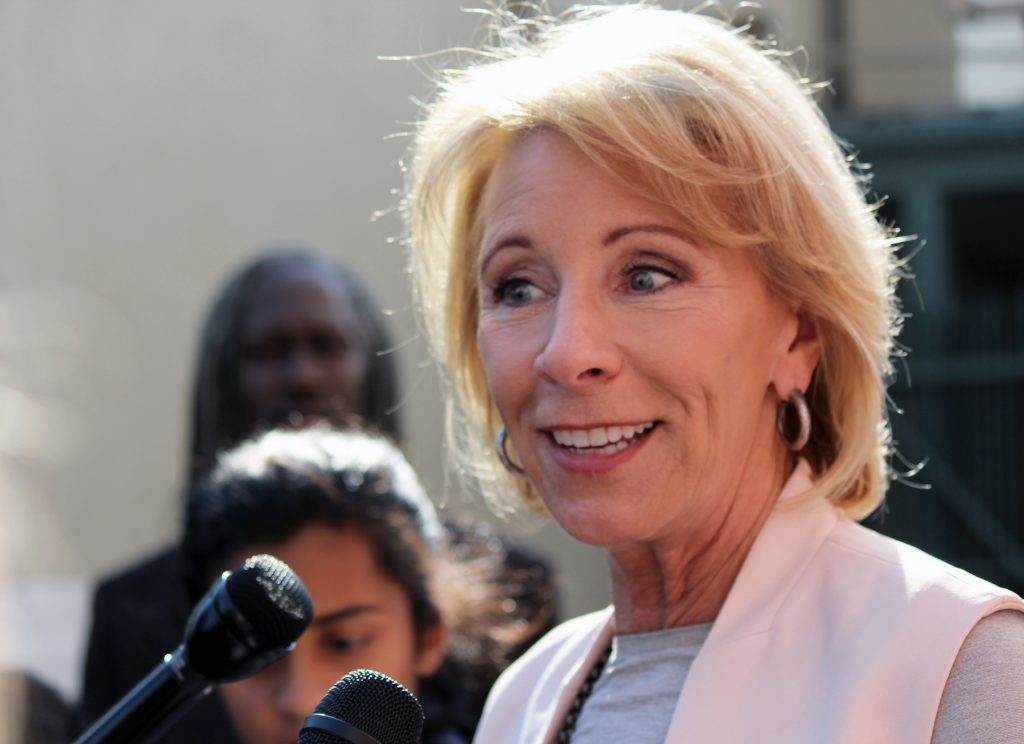 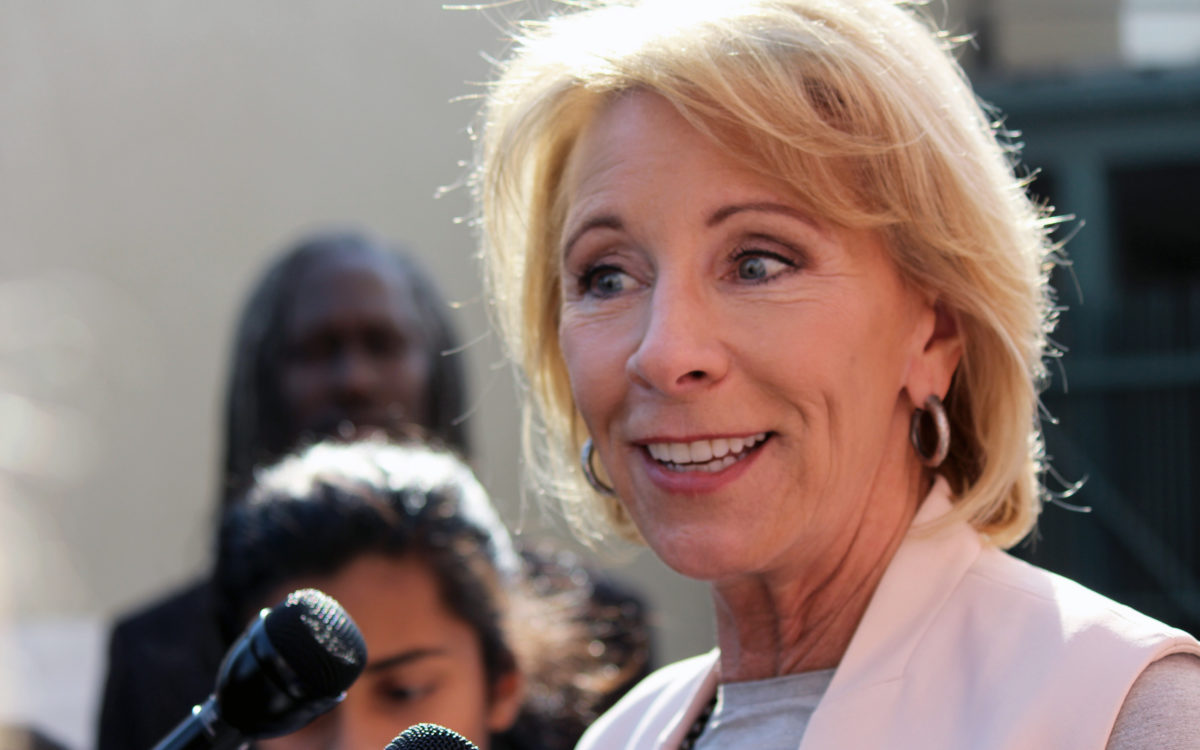 U.S. Secretary of Education Betsy DeVos, during a visit to Thomas Russell Middle School in Milpitas in October 2017.

U.S. Secretary of Education Betsy DeVos, during a visit to Thomas Russell Middle School in Milpitas in October 2017.

In a speech in which she lacerated states for not being sufficiently creative in coming up with education plans required by the federal government, U.S. Secretary of Education Betsy DeVos has found common ground with California Gov. Jerry Brown’s emphasis on local control of K-12 education.

Her comments, made to the Council of Chief State School Officers in Washington on Monday, coincided with fellow cabinet officer Attorney General Jeff Sessions’ declaration of legal war against California when he filed a suit this week challenging the constitutionality of the state’s landmark “sanctuary” laws intended to blunt the full force of President Donald Trump’s drive to deport unauthorized immigrants in California and elsewhere.

DeVos’ remarks also came in the midst of negotiations between state education officials and her department over the education plan California submitted, as it is required to do by the Every Student Succeeds Act, in order to receive federal education funds. The department sent it back with multiple questions, and state officials have been negotiating with the federal department to resolve the differences.

In her speech, DeVos quoted Brown’s views on local control at some length — all favorably. “Even though I’ve not yet had the opportunity to approve California’s plan,” she said, “its governor was spot on when he said: ‘This is not going to be solved in Sacramento. Kids learn at home and in the classroom …People who really want to help in a school that is not performing should go to the principal and find out what they need. Local empowerment. That’s what it’s all about. The age of micro-management from Washington or Sacramento is over as far as I am concerned.'”

DeVos also seemed to want to get credit for not being too heavy-handed in trying to impose her and Trump’s major priority — greater school “choice” for parents — on states or schools. In DeVos’ case, her major preoccupation before becoming secretary was on expanding charter schools and offering some form of taxpayer support for private school tuition.

“If we wanted to dictate from D.C., I’d claim the mantle of our nation’s “choice chief” and reject plans (from states) because they don’t give parents more quality choices,” she said.” But I haven’t done that. And I won’t. The Department is not the national school board.”

She said ESSA was drawn up and passed in part in response to pleas from chief state school officers asking for more flexibility to be able to innovate in ways they feel is best for their communities.

But she said states have so far failed to seize the opportunity. “Too many plans … only meet the bare minimum required by the law,” she said.

She said only four states have applied for the Innovative Assessment Pilot, which allows states to come up with their own testing regimens. Only two states have sought to participate in Direct Student Services, which allows them to use 3 percent of their Title 1 funds for a range of programs like credit recovery courses, reimbursing low-income students for Advanced Placement or International Baccalaureate courses, transportation costs, and so on.

According to a report by the nonprofit organization Chiefs for Change, California could use $54 million of its Title 1 funds this way. But in order to do so, California would need to set up a competitive grants program, which the Chiefs for Change report acknowledged would be a labor intensive proposition. In addition, it might run counter to the thrust in the state to give education funds directly to local districts, rather than the state deciding how they should spend them.

At the same time, California has arguably done more than most states in setting up an entirely new accountability system based on multiple measures, along with a new funding formula that targets funds to low-income and other high-needs students as well as a color-coded “dashboard” with indicators of student performance. These reforms were implemented independently of passage of the Every Student Succeeds Act, but are largely consistent with its major provisions, as DeVos seemed to imply in her comments this week.

DeVos did criticize one state for “taking a simple concept like a color-coded dashboard and managing to make it nearly indecipherable.” But because she did not name that state, she was not explicit as to whether she was referring to California. Other states have dashboards, but California’s color-coded version is by far the best known and most recently devised.