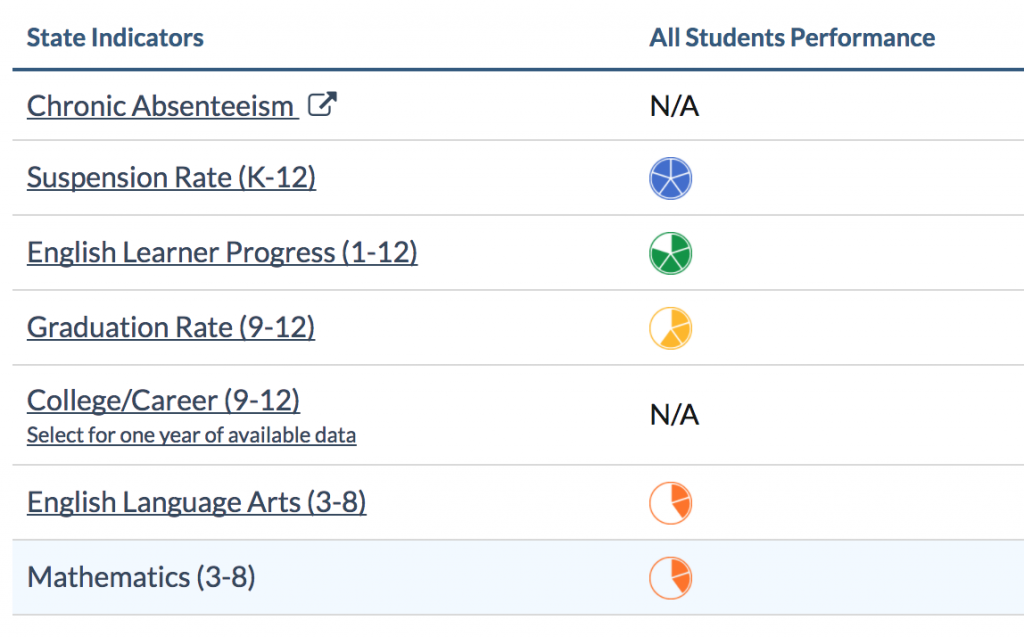 Nearly 4 in 10 parents say they’re familiar with or know a lot about the California School Dashboard, which grades schools and school districts using multicolored metrics, and those who have visited the website generally like what they’ve seen and found it useful.

That’s an unexpected finding of a poll released Friday of 2,500 registered voters in California, including 595 parents, and runs counter to sharp criticisms of the website by civil rights and student advocacy groups.

The poll was conducted last month by the USC Rossier School of Education and Policy Analysis for California Education, or PACE, a university-affiliated research nonprofit organization. Participants reflect a geographical cross-section of Californians by party affiliation but not ethnicity. Because of lower voter registration, Hispanics, who make up about 40 percent of the population, were 24 percent of the respondents. (Go here for detailed results for all voters; go here for results of the parent subset.)

The school dashboard debuted last year as a key element of the state’s school accountability and improvement system. It reports performance on schools and districts, including data on a dozen student groups. It is based on several indicators, including suspension and graduation rates, test scores, performance of English learners and high school students’ readiness for college and careers. The site provides extensive data for teachers and parents who want to become involved in setting priorities in their districts’ annual accountability plans.

The California State PTA has embraced the dashboard, but numerous student advocacy groups have called the presentation too complicated and confusing for parents wanting a simple school ranking and ability to compare schools. Hearing the criticisms, Gov. Jerry Brown has included $300,000 in the proposed 2018-19 state budget to revise the design.

Of all voters surveyed, 80 percent said they either had never heard of the dashboard or knew little about it, while 12 percent said they had visited it at least once or twice. That compares with 58 percent of parents who had never heard of or knew little about the dashboard and 35 percent who had visited the site at least once.

After all poll participants were shown sample screen shots from the site, support remained high:

Morgan Polikoff, an associate professor of education at USC and one of the researchers on the poll, said he was surprised by how positively voters and parents found the dashboard.

“The perception in education policy circles is that the California dashboard is hopelessly opaque. That’s far from the perception we got from our poll,” he said. “It could be the policy wonks are wrong,” or, once they have an in-depth dashboard experience — beyond taking a cursory look at screenshots, as required by the poll — parents will find it difficult to navigate, he said.

It will be important to have follow-up studies to see how people engage with the dashboard, including non-English speaking, undocumented parents who were not represented in the survey, he said.

Shelly Spiegel-Coleman, executive director of Californians Together, a coalition of organizations that advocate for English learners, faulted the poll for not seeking out parents of English learners, who make nearly a quarter of students in the state. Interviewing them “would have had a significant effect on the results,” she said.

Despite the large numbers of English learners, there is no foreign language translation of the state dashboard. The state policy requiring translating documents in districts where English learners comprise 15 percent of students exempts the state itself, she said.

In creating the dashboard, the State Board of Education chose to grade each indicator separately and not create a single school or district rating. Multiple ratings help identify areas that need improvement, board President Michael Kirst argued, but this approach distinguishes California from most states.

To get participants’ views on the issue, pollsters split the group and provided them slightly different background information.

One group was told some states provide summative rankings, while others give each school individual ratings on different measures of performance. Within that group:

The other group was told 40 states chose a summative ranking, while California chose multiple performance ratings. That information made a difference. Of those voters:

Asked whether schools should be held accountable for teaching social and emotional skills as well as for student test scores, 75 percent of voters overall and 77 percent of parents said they should, 12 percent of both groups said no, and the rest said they didn’t know.

Pollsters asked in three different ways whether school funding should be increased.

One half of the participants were then told that the state Constitution requires spending about 40 percent of revenue on schools and that per-pupil spending in 2015-16 was $10,291. Knowing that, support for more funding fell to 56 percent among voters overall and 65 percent among parents.

When the other half of participants were told that the state ranked 41st in the nation in per-student funding, support for more state funding was 67 percent among voters overall and 69 percent among parents. 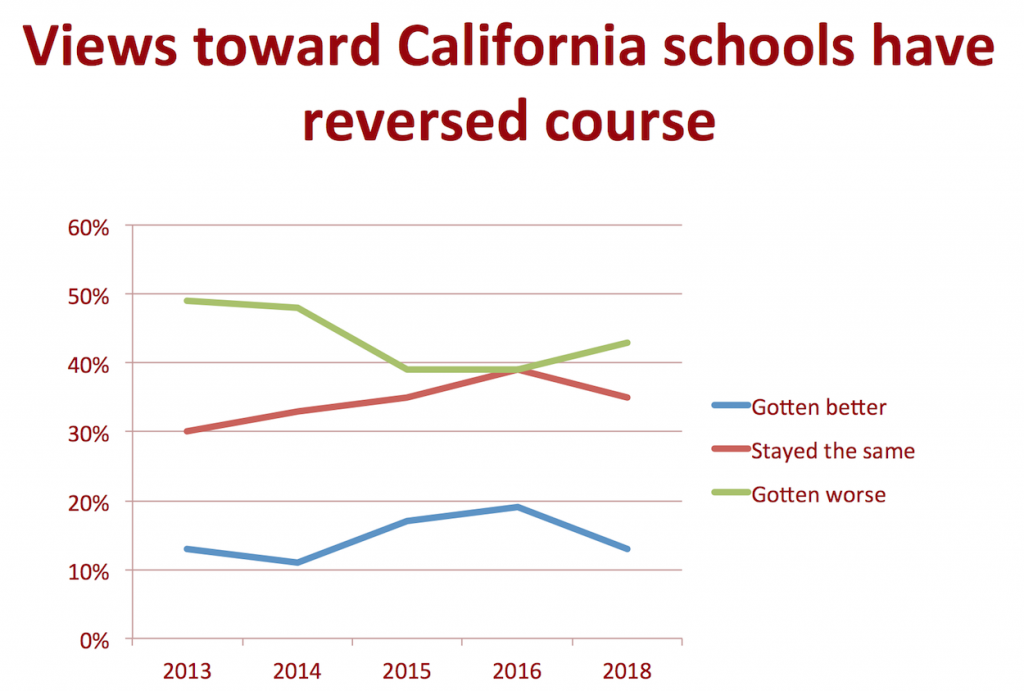 Polikoff said it’s difficult to say why views of schools in California would have declined over the past year. One possibility is that in a heavily Democratic state, actions in Washington under the Trump administration may have influenced voters’ overall views of education, he said.

Pollsters found some misconceptions when they asked respondents about their understanding of charter schools: