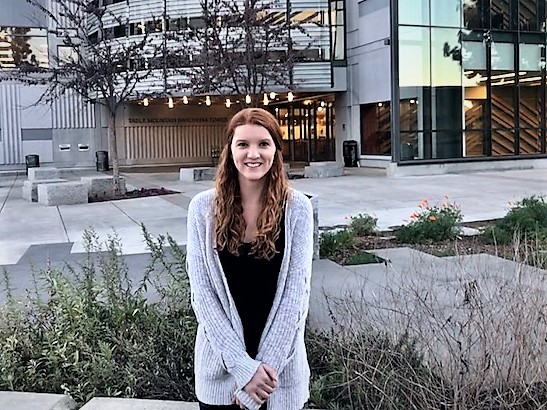 With graduation in sight this spring, Fresno State student Kelsey Decker was in a scary financial position.

After receiving some federal aid, she still owed $600 for tuition and faced being dropped from classes if that was not paid quickly. She was also worried about paying for rent with her earnings working 20 hours a week at a retail greeting card store.

Then Decker heard about a campus program that helps upperclassmen like her who are close to graduating but have financial troubles that could force them to drop out. She applied and was delighted to be awarded a $1,500 micro grant.

“I was so excited,” she said, recalling the moment when she learned of the aid. “It just really relieves the stress of finances. I was really worried about how I was going to pay for all that.” Plus, that meant that Decker, who is majoring in deaf studies, did not have to add to her student debt, which totals about $10,000.

Fresno State’s Bulldog Retention Grant is part of a national trend that is using emergency money as a tool to help retain and graduate upperclassmen students, even those who might not be eligible for other aid, experts say. For decades, some schools have quietly given out funds, often donated by alumni, to help students who faced such emergencies as illness, car accidents, homelessness or family deaths. Now in the past few years, more schools are adding a focus on aiding students who are near graduation but might not make it without some extra money — often relatively modest amounts — beyond traditional financial aid.

In California, that effort is linked in part to the Cal State University system’s efforts to vastly improve its graduation rates by 2025. The campuses offering such aid certainly help the needy students surf through rocky waters but also help the schools themselves bolster much-watched completion rates and improve their academic image.

Established last year, the Bulldog Retention Grant at Fresno State gives emergency money to students who have 30 or fewer credits left to earn for their degrees, among other qualifications. While accepting applications, the university also looks for students who registered for classes but still owe $1,500 or less, officials said. The recipients are not all low-income and may be middle-income students in a financial pinch. Some already received other financial aid while some may not meet the strict income guidelines for Cal Grants and federal Pell Grants. Although there are no income limits for the retention awards, students must demonstrate real need and work first with counselors to see if they might be eligible for other aid.

Last year the program gave out 92 awards, totaling $51,000 and ranging from $420 to $1,500. Campus officials say it was money well-spent since 15 of those awardees have graduated and the other 77 are all continuing at school; another 249 were awarded this past fall but retention statistics are not yet available about them.

The grants “became another tool for us in the student success arsenal,” said Frank Lamas, Fresno State’s vice president for student affairs and enrollment management. He said “it made no sense whatsoever” to lose or delay a senior’s degree because of relatively small amounts of money. “Why would we want that kid to be a casualty?” he asked.

The money Fresno is spending on the micro grants comes mainly from state and university funds aimed at improving graduation rates. Much of the same pot of money goes to more traditional steps such as hiring extra faculty and tutors.

Fresno’s program is based on Georgia State’s pioneering Panther Retention Grant, which began in 2011 and is named after its own mascot. Over the past three years or so, more schools have started similar efforts and many are considering it, according to Amelia Parnell, vice president for research and policy of the National Association of Student Personnel Administrators (NASPA.) “This is a movement now,” she said.

A 2016 NASPA study and survey found that about 532 of 706 participating colleges reported having some forms of emergency aid. Funded by donors or regular operating budgets, those include vouchers for cafeterias and bookstores, cash grants and loans and access to food pantries. About a third of those schools said they also offer so-called “completion” grants aimed usually at seniors, according to the organization which is also known as Student Affairs Administrators in Higher Education.

Parnell, a co-author of the study, said that all such emergency aid, even those not technically targeting seniors, can be described as retention strategies “to get students across the finish line and get them to a degree.”

The Coalition of Urban Serving Universities and the Association of Public and Land-grant Universities published a 2016 study, entitled “Foiling the Drop-out Trap,” about grants “for retaining and graduating students.” While it described such aid as important, the study said the grants would be “ineffective” as standalone efforts and need to be part of a wider campus culture dedicated to “increasing retention, graduation and overall success for all students.”

Many schools reported successes with the grants, which sometimes remain a loan unless the student graduates within a semester or two. And the study noted that schools often consider the grants a wise investment since they get most of the tuition revenue they would otherwise lose with a drop out; what’s more, in some states, public funding for the university increases as graduation rates improve.

However, the study acknowledged that evaluation of the programs “is fairly limited” and more research needs to be done before the grants can be definitively described as boosting graduation rates. The impact “can be difficult to isolate” among many other factors that affect a student’s ability to graduate, the report stated.

Upperclassmen may need the aid more than younger students because they may have used up their eligibility for some state and federal aid. That is particularly true for students who transferred from community college and may have been attending universities part-time or changed majors, according to Joy Pedersen, associate dean of students at Cal Poly San Luis Obispo.

That Cal Poly campus began an emergency grant program called Cal Poly Cares three years ago with $5 million in private donations from campus foundation board members to help any student facing a personal or financial crisis. Last year, it augmented that with $60,000 in state funded graduation initiative money to help seniors get a degree, Pedersen said. Some seniors were approached because they registered for classes but had unpaid tuition balances.

Over the past two years, 311 students received emergency grants ranging from $90 to $3,000 with most about $2,000, Pedersen said. Of those, 90 seniors got retention money; 25 of last year’s 33 senior grantees have graduated.

Students might have found other resources, possibly credit cards or loans, Pedersen said. “It’s difficult to say whether or not they would have graduated without the grant, but I can say I know it would have been harder and perhaps impossible without the grant,” she said.

Even grants for freshmen and sophomores can help with retention, she added: “It improves their sense of belonging on campus. They feel the university cares about their well-being and wants to see them succeed.”

Universities say they first try to review documentation and tax records to see if applicants for the retention grants might be eligible for campus, state and federal aid, including subsidized loans, they had not previously received. But if that does not produce any or enough additional money, students can qualify for the graduation grants through a special application and an interview.

Mayra Mejia, who just graduated from Cal Poly San Luis Obispo, said she had financial troubles even though she had received other state and federal aid and had campus jobs. Rent is expensive in the area and she was reluctant to ask for help from her parents, who are farm workers from Lodi. She first received a Cal Poly Cares award as a sophomore and then recently as a senior racked up more expenses taking graduate school examinations. She received another $2,000 that she said allowed her to finish school without taking out loans.

“I felt I was being overwhelmed with all these financial burdens and I am very thankful I received this resource,” said Mejia, who was a graphic communication major.

In Los Angeles, the Otis College of Art and Design has long had emergency loans. Then recently it began a scholarship for students who are six or fewer units from graduation — usually fifth-year seniors who previously dropped or failed a class. The grants range from $2,131 to $8,472 for one or two courses, often subsidizing students who used up their timed eligibility for federal aid. The philosophy is “we will do what we can to support you. Don’t let the cost of one or two extra courses stop you,” said Laura Kiralla, vice president of campus life.

It is too early to know whether the program is successful, Kiralla said. Of the nine awards this past fall, two students have graduated and seven others still are in school. In the past, some “super seniors” did not finish because they already landed well-paying jobs in Hollywood and other industries and didn’t feel they had to graduate. So Otis College, she explained, now is considering whether to allow juniors also to receive the grants, well before that hiring occurs.