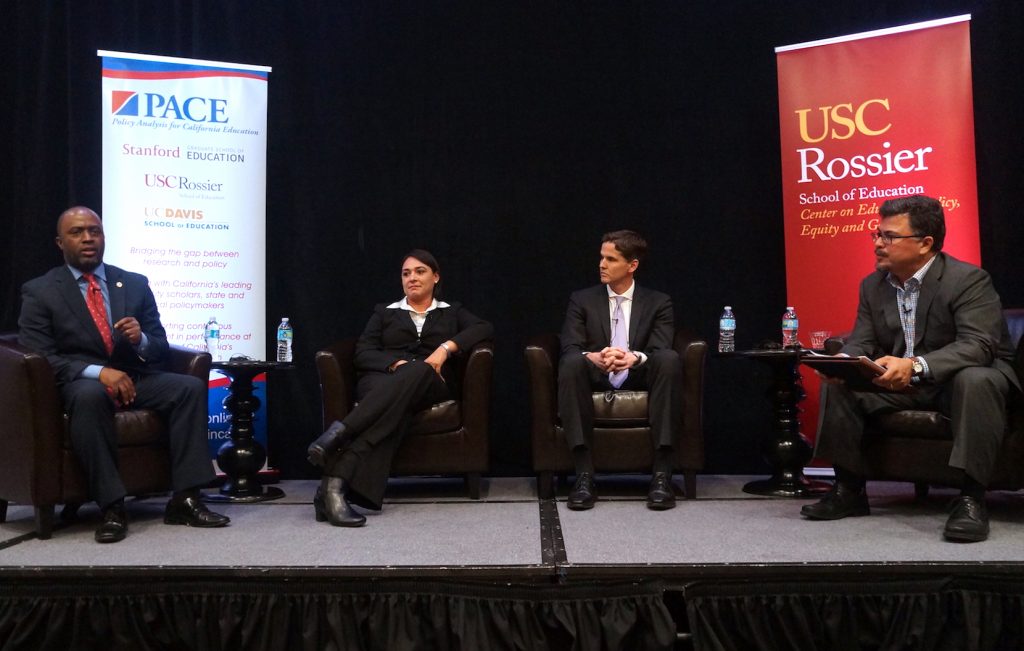 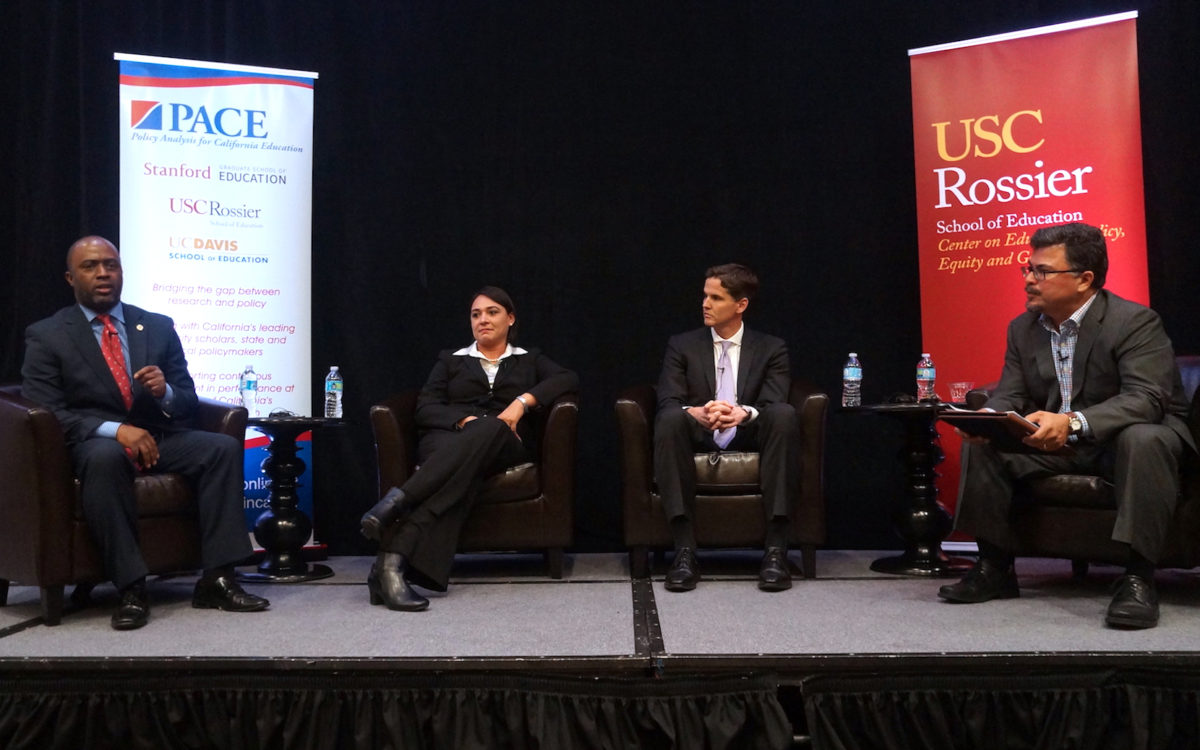 Credit: Hiep Ho / Policy Analysis for California Education
Tony Thurmond, left, makes a point during the debate at USC Rossier School of Education in Los Angeles. With him are candidates Lily Ploski and Marshall Tuck and moderator Adolfo Guzman-Lopez.

Credit: Hiep Ho / Policy Analysis for California Education
Tony Thurmond, left, makes a point during the debate at USC Rossier School of Education in Los Angeles. With him are candidates Lily Ploski and Marshall Tuck and moderator Adolfo Guzman-Lopez.

In a forum in Los Angeles marked by subtle distinctions rather than large differences, three candidates for California’s next state superintendent of public instruction called Monday for more transparency in school spending of state funds, while making guarded endorsements of the state’s five-year-old school funding formula targeting funds at high-needs students.

Marshall Tuck, Assemblyman Tony Thurmond, D-Richmond and Lily Ploski emphasized the need for substantially more money for K-12 schools and early education. Two of them suggested unorthodox ways to raise at least a portion of what they said is needed.

Tuck said that all tax revenue from the legalized sale of marijuana should be funneled to education. He is a former co-founder of the Green Dot charter schools in Los Angeles and was chief executive of the Partnership for Los Angeles Schools, which runs public schools as a collaborative effort with the mayor’s office and the district.

Thurmond is authoring a bill that would tax privately owned prisons in California, raising potentially hundreds of millions of dollars that would be used to fund preschool and after-school programs. A former social worker, he is now in his second term in the Assembly and has served on the West Contra Costa Unified school board and the Richmond City Council.

They and the third candidate, Ploski, said they support amending Proposition 13 to raise more revenue from commercial and industrial property owners. An initiative to do that, called a “split-roll tax,” raising an estimated $4 billion for K-12 schools and community colleges, will likely be on the November ballot.

Ploski is a financial awareness instructor for Upward Bound, a program for low-income and first-generation college students, at Mills College and a former dean and athletic director in the School of Human Development and Performance at Solano Community College.

All three candidates will be on the June ballot as they seek to replace Tom Torlakson, the current state superintendent, who is termed out after serving two four-year terms. The candidate who gets more than 50 percent of the vote in June for the nonpartisan office will be automatically elected. If none does, the two leading vote-getters will face each other in a runoff in November.

The forum was sponsored by Policy Analysis for California Education (PACE), a research and policy collaboration jointly run by USC, UC Davis and Stanford University, and the Center for Education Policy, Equity and Governance, a new institute at the USC Rossier School of Education. The forum was moderated by Adolfo Guzman-Lopez, an education reporter at KPCC radio.

“A lot of people blame educators for conditions in our schools, and that is totally wrong,” Tuck said. “Teachers did not underfund their classroom. Principals did not smother their classrooms with red tape. Superintendents did not create a teacher shortage. Our politicians did.”

Both Thurmond and Ploski agreed that the time it takes a teacher to get permanent status or tenure should be extended to three years, although Thurmond says they should have a right to appeal after the third year, a right teachers don’t currently have. Tuck said that tenure should only be granted after four years, with a possible fifth year for those teachers still not up to speed, along the lines of what Assemblywoman Shirley Weber, D-San Diego is proposing.

As for the Local Control Funding Formula, Thurmond said it only guarantees that funding levels should be restored to the pre-recession level of 2008, which is not sufficient. The state needs a permanent source of funding with a goal of reaching the top funded states like New York, he said.

The state schools superintendent has limited policy authority beyond serving as a megaphone for education issues. His or her main responsibility is to run the California Department of Education. Yet four years ago, the $30 million raised in the race between Tuck and Torlakson was the most expensive — by far — on the ballot, with unions backing Torlakson and wealthy charter supporters backing Tuck.

But at Monday’s forum, both Tuck and Thurmond, who has been endorsed by California’s teachers unions, stressed their independence. Tuck, like Thurmond, said he would support eliminating for-profit charter schools and would have “zero tolerance for fraud” by any school, charter or district. His 6-year-old son, he said, attends a Los Angeles Unified elementary school.

“High-quality charters run by nonprofit organizations, particularly in high poverty neighborhoods, can benefit the public education system,” Tuck said. But the focus should not be on charters or district schools but on building “a collective public school system for all kids.”

Asked to cite an area of disagreement with the California Teachers Association, Thurmond cited his vote supporting a later starting time for high schools — a bill that stalled in the Legislature last year. “My job is not to vote just because someone supports me. My job is to vote in ways that would make my kids proud.”

The candidates said they supported the goal of the Local Control Funding Formula. But they broadly agreed there must be more transparency to ensure the funds reach the high-needs students they were intended to help. “We need more transparency if we want the public to invest more in public schools,” Tuck said. More money “is going to students of greatest need but how are they using it?” It’s not possible to know which strategies are most effective because “districts are not required to show where the money is going and the impact on kids.”

Ploski agreed that district spending “is still a mystery.” Looking at how districts spend their funds each year, as opposed to budget promises, tells “the real story,” she said. Districts need to take time “explaining, articulating, illuminating for parents how spending will affect them.”

President Donald Trump’s name came up only once during the forum. “Stand up to President Trump, stand up to Secretary DeVos,” Thurmond said. DeVos, he said, “is saying she won’t fight for all students, including transgender students,” an apparent reference to the Trump administration’s rescinding of rules for gender neutral bathrooms.

The candidates embraced successful efforts to reduce suspensions and expulsions in California, but said that fewer students being pushed out of school alone isn’t the answer.

Tuck said more training for teachers must accompany fewer out-of-school suspensions. Ploski said more research is needed to understand what happens to suspended students. And she said she “loves restorative justice” — a program in which students acknowledge what they have done and try to make amends to students or others they have wronged.

Thurmond, who sponsored legislation to fund restorative justice programs in 30 districts, cautioned against misusing police officers, including school resource officers, on school campuses.  Schools should stop “criminalizing kids by asking police officers to be the disciplinarians,” he said.