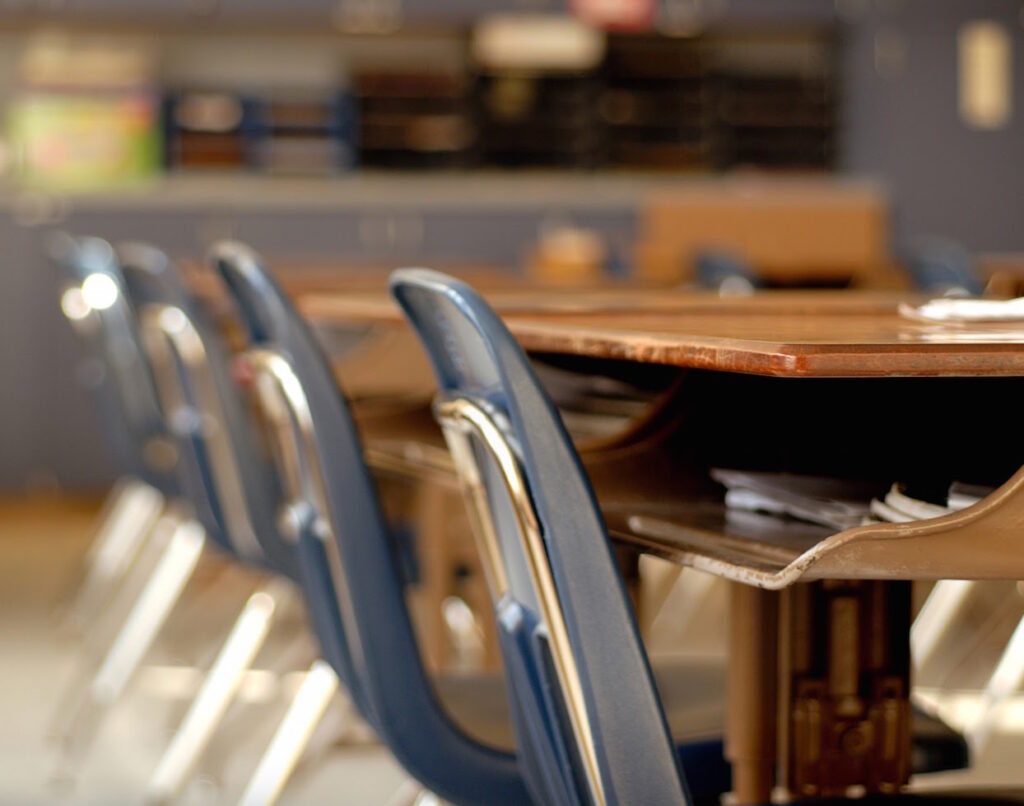 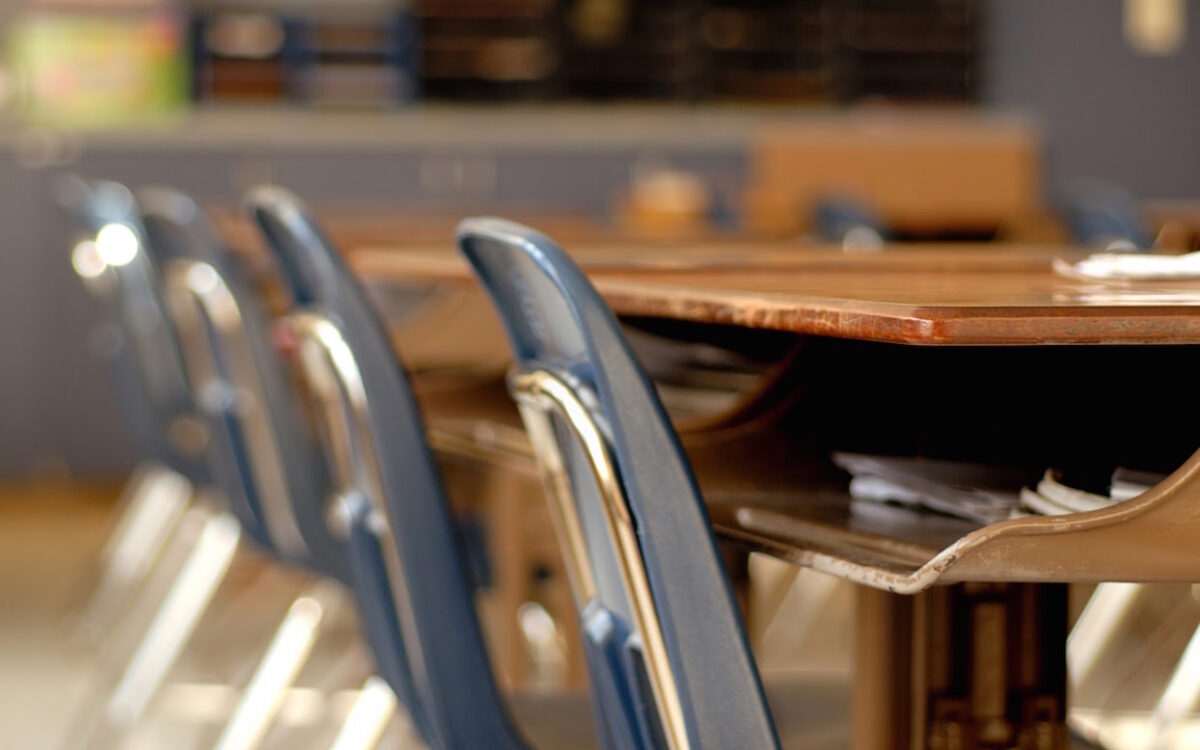 As the school day ends at Peyton Elementary School in Stockton, Christina Del Prato calls a mother whose daughter was absent 62 times last year. The girl has missed 21 days through the first half of this year, including the past two days.

Del Prato, an attendance case manager, is a key player in an effort being waged across the state to focus not just on students with unexcused absences but on those who are chronically absent, meaning they have missed at least 10 percent of school days for any reason.

California collected and released data on chronic absenteeism from schools for the first time last year as part of its new accountability system. A school’s chronic absenteeism rate could be included as soon as this fall on the districts’ dashboard, which shows how students are doing on multiple measures.

The girl’s mother tells Del Prato her daughter is sick with the flu and a fever, and has a doctor’s note excusing her from school. Del Prato is friendly and understanding, but she reminds the girl’s mother about her daughter’s mounting absences and the attendance contract they all signed to keep her at Peyton instead of transferring her to an alternative school.

If her fever breaks by morning, Del Prato tells the girl’s mother, she needs to come to school.

“She’s missed so much already,” Del Prato tells the mother. “If she still feels bad we can get her home — but send her here.”

The girl was one of more than 7,000 Stockton Unified students who were considered chronically absent in the 2016-17 school year. The district of just under 38,000 students in San Joaquin County has a chronic absentee rate of 19.1 percent — the highest among the state’s 30 largest districts and well above the state average of 10.8 percent — despite employing the kind of strategies that experts recommend to address the root causes of why students don’t come to school.

“The frustrating thing is that even though we’ve improved it, you can look at our rate and it’s still almost twice as high as the state rate,” said Dan Wright, Stockton Unified’s acting superintendent. “We’ve got a lot more work to do.” 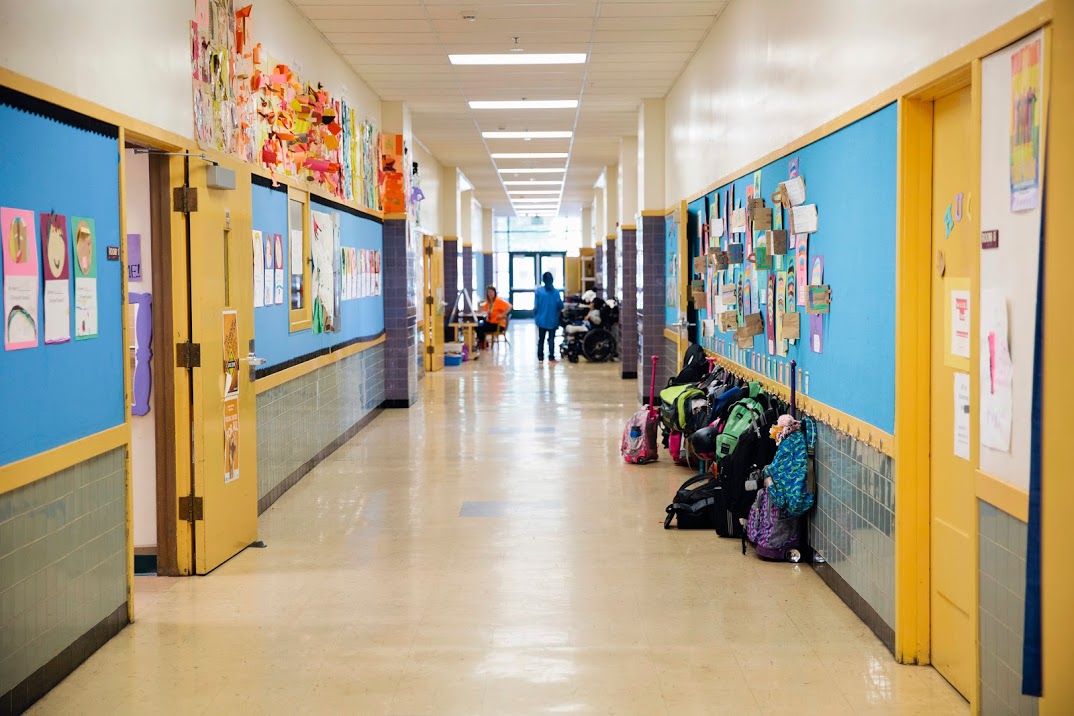 To understand how some of California’s largest school districts are working to improve student attendance, EdSource talked with education and attendance officials and analyzed chronic absenteeism data for the 30 districts with the highest enrollment in the state. The enrollment totals and rates do not include charters.

Focus shifts from truancy to all absences

But doing that can be challenging for these districts, because it means dealing with highly personal factors that can lead to absences — from family housing difficulties to chronic health conditions — on a scale of tens of thousands of students.

“You can’t just look at attendance as attendance,” said Sonia Llamas, an assistant superintendent in the Santa Ana Unified School District in Orange County, which had a chronic absence rate of just 6.3 percent. “Attendance is a symptom of a greater issue.”

Policies at the state and federal level have helped drive the shift in focus from unexcused absences to chronic absenteeism, said Hedy Chang, executive director of the nonprofit Attendance Works, which researches chronic absenteeism. Missing 10 percent or more of school days is associated with lower academic achievement and higher dropout rates through the rest of students’ academic careers, the group’s research has found. 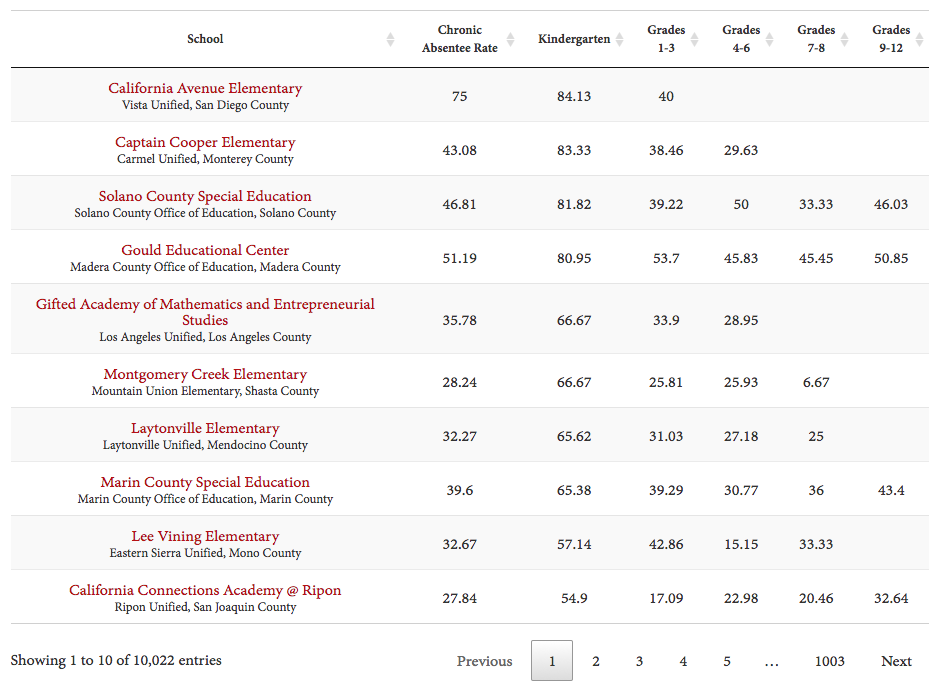 Districts must track and address chronic absenteeism in their accountability plans under California’s Local Control Funding Formula and the federal Every Student Succeeds Act. In December, California released for the first time a database of district and school chronic absence figures from the 2016-17 school year. The statistic could be among the measures included in the state’s dashboard of student performance measures as soon as the fall of 2018.

The school dashboard debuted last year as a key element of the state’s school accountability and improvement system. It reports the performance of schools and districts, including data on a dozen student groups, and is based on several indicators, including suspension and graduation rates, test scores, performance of English learners and high school students’ readiness for college and careers.

While Stockton had the highest percentage of chronically absent students among the 30 largest districts, many smaller districts have higher rates; Stockton ranks 149th overall in chronic absenteeism out of 985 California districts included in a database provided by the state Department of Education.

Chronic absenteeism is typically higher at districts that serve larger numbers of low-income students, a correlation that was true among the state’s large districts as well.

Santa Ana Unified bucks that trend — its chronic absence rate was the fifth-lowest among those districts, even though just over 90 percent of its students qualify for free or reduced-price meals.

Llamas, the district’s assistant superintendent for school performance and culture, said reducing chronic absenteeism has been a district focus for the past six years. Principals track attendance data to spot trends among students, and the district has hired eight new employees to work on the problem as community liaisons, focusing on the broader factors that can lead to absences.

Chang, the Attendance Works executive director, said additional money many districts have received as a result of the Local Control Funding Formula has allowed many districts, particularly those serving low-income students, to bolster support staff in general and attendance-focused staff in particular.

Fresno Unified in the Central Valley — with an 18 percent chronic absentee rate, ranked second among the 30 largest districts — used the money it received to grow its attendance department from six employees four years ago to nearly 40 today, attendance coordinator Kristi Jackson said.

Over the last three years, Los Angeles Unified has hired hundreds of new pupil services and attendance counselors, doubling the size of that department to about 600 people, said Michelle Castelo Alferes, the district’s director of pupil services. Los Angeles Unified — California’s largest district, with more than 500,000 students — had a chronic absence rate of 12.4 percent last year, slightly higher than the statewide average of 10.8 percent.

Stockton and other districts also engage in targeted strategies for educating parents about the importance of attendance: reaching out to families of incoming students, those who have been chronically absent in the past or those who have missed large amounts of school around the holidays, when families may take long trips to visit relatives out of the country.

“We tell them, first: Every one day that they miss, it takes two or three days to catch up,” said Del Prato, who works in Stockton Unified’s Child Welfare and Attendance Department. “Feeling lost in school can make a child feel really defeated, so to have them here and exposed to instruction is key.”

Chang warned, though, that educating parents is the “easy win.” What’s harder, she said, is addressing the other factors that can keep students out of school. Del Prato and Wright listed a wide range of barriers that can affect attendance: Families that move across town, addicted parents too intoxicated to drive to school and neighborhoods that lack sidewalks, forcing students to walk in traffic, to name a few.

Chang said districts must develop plans to reduce those barriers and should also work to give students a reason to come to school, by forging meaningful relationships with teachers and staff members there.

“It’s the relationships which are so key to motivating kids to show up,” Chang said. “Ultimately, you have to improve the experience of the kid and their family at school to improve attendance.”

Back at Peyton Elementary, Del Prato checks in with a 7th-grader. The girl only has five absences this year, down from 40 last year, but two of them came in the last week.

Del Prato has just learned from Peyton’s principal that the girl’s recent absences were a result of problems involving her mother and a new boyfriend. Police eventually brought the girl to school.

Staff members at Peyton reward students who meet their attendance goals with prizes — younger children might get a toy, older ones a Frappuccino from Starbucks.

As the 7th-grader sits down, Del Prato complements her earrings and keeps her questions general.

Eventually, she asks. “Do you want to share something bad?”

“Family,” the girl says. She doesn’t want to get into it now, so she and Del Prato agree to talk more in a couple of days.

Del Prato tells the girl she knows it wasn’t her choice to miss school those two days. She’s still on track for a Frappuccino.

“I appreciate you just getting here,” she tells the girl, “because I know it’s not easy.”