California university students are stretching...and it is all happening in writing class, not the gym 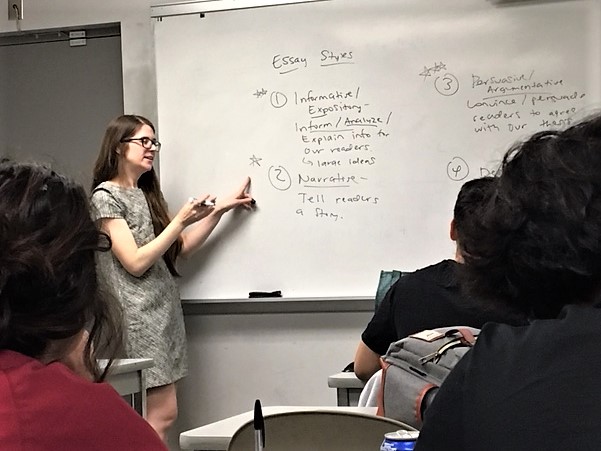 After all, in his Los Angeles high school English classes, he never was required to write much beyond a formulaic five-paragraph essay. And at home, his parents mainly spoke Spanish and were not able to help him with English grammar.

But Pivaral was worried when friends at other colleges warned him to stay away from remedial classes that didn’t earn him any college credit. They had gotten stuck in those courses and then had trouble completing them.

So he was relieved that he was placed last fall instead in what is called a “stretch class” in English composition, an arrangement that extends a semester’s worth of college-level material over two semesters. That provides students with extra time to master topic sentences, persuasive arguments, citation standards and graceful transitions. And, best of all, students can earn academic credit toward a diploma for both semesters of the course.

Such stretch classes are expected to become much more common around the California State University system as it moves to eliminate non-credit remedial classes in the fall on all its 23 campuses and replaces them with alternatives that carry academic credit yet also offer extra help. Supporters of the stretch model say it works particularly well with the time-consuming revisions that improve writing, especially if composition muscles were not flexed much in high school.

“One semester is good and all but sometimes you need more to learn to get better at writing,” said Pivaral, who is considering being a music major and is doing well in the English composition course sequence. “For the rest of your life, no matter where you wind up, you will end up needing to write.”

Another model, known as a co-requisite course, is expected to be popular in math. A co-requisite course takes just one semester, often with each class session lasting 20 minutes or so longer than the traditional 50 minutes, and tutoring is available during and after the class.

About half of the CSU campuses already offer stretch classes in English composition, along with the traditional one-semester college-level writing class that also fulfills a graduation requirement. Faculty report success with the stretch approach, particularly compared to the soon-to-be abandoned remedial courses that, they say, delayed too many students and led too many to drop out of school.

Yet as the new policies go into effect in the fall, more scrutiny will focus on whether stretch classes succeed with large groups of students statewide, including many who don’t speak English at home. The deeper inquiry is whether that will help more students graduate and with less delay.

At Pivaral’s Cal State Los Angeles stretch class, known as College Writing, instructor Megan Bowe says the pass rate is high. In the fall, all but two of the 20 students passed with at least a C and the failures or withdrawals were mainly due to what she called “bad time management,” financial issues and students doubting their abilities.

She and other professors around the Cal State system say the pace of presentation of the material is slowed but not watered down even though many students arrive at the university with weak writing and reading skills. (A few students even confess to never having read a school-assigned book all the way through high school.)

To help ensure standards at Cal State Los Angeles, a professor who does not know the students helps to appraise the writing portfolios they must produce for the course. Classes are kept small — 20 or fewer students — and, to foster camaraderie, most students continue together with the same teacher though both terms.

The stretch course “is giving them the time they need to make the shift from high school to college and giving them the scaffolding they need in writing,” Bowe said, during an interview in her campus office. And beyond mastering such tasks as paraphrasing, paragraphing and self-editing, Bowe said student attitudes are important. Since Cal State Los Angeles stopped no-credit composition two years ago, more students start college feeling like they belong there, she said.

Bowe’s class meets three times a week for 50 minutes each, starting at 9 a.m. Over the spring semester, students are required to write three essays, each four to six pages long, plus some revisions, shorter pieces and journal entries. During one session, the class was tackling exercises for essay topics on personal identity and how much their neighborhood defines them. The assignment was linked to reading Joshua Davis’ non-fiction book “Spare Parts” about undocumented, low-income teens who won a national robotics competition.

Bowe’s 19 students, many of them commuter students from Latino immigrant families and the first in their families to attend college, were asked to come up with words about values, appearances and interests to help them narrow down their ideas. Among the responses: hardworking, religious, foodie, caring and so on. A few students, however, seemed too shy or stuck. Bowe, a warm supportive presence, circled the windowless classroom and coaxed them.

“Once we figure this out and narrow it down, our writing later will be a lot easier,” she said.

Later in the semester, Bowe launched students on their final essay, an exploration of whether individual enterprise or collective group action is more important in a science competition and in contributing to wider social progress. She urged students to create a chart with supporting points on both sides from class readings, then choose a position and start to write a solid argument. Brainstorming should lead to an outline, which in turn should get fleshed out to a first draft.

Making writing easier — and better — is the philosophy behind the class itself and the educational movement it represents. But will it work everywhere?

Some experts think the stretch model puts too many students at risk of not completing their English requirement because the extra semester increases the likelihood of them experiencing personal or financial problems. That’s why community colleges, with a more transient student body, are focusing more on the one-semester co-requisite classes.

“Whenever you add ‘exit points’ — opportunities where students can be lost by not passing a course, or not enrolling in the next course — you typically have lower completion,” said Katie Hern, an English instructor at Chabot College and executive director of the California Acceleration Project, a group promoting alternatives to non-credit remediation. The one semester model, supporters also say, is more efficient with faculty time and costs students less too.

The CSU’s Academic Senate wanted to slow down the switch from remedial education because they say the central administration has not consulted them enough. But the system headquarters says it is pushing ahead on schedule other than giving some campuses an extra year to take care of technical details such as changing the number of credits some courses will carry. Each campus will be allowed to decide whether they adopt the stretch model or an alternative this fall. Some made the choice years ago.

(As part of those reforms, the Cal State system recently dropped placement tests and campuses now rely on high school grades, SAT scores and other measures to help decide which freshman English course a student should take. Some campuses allow students to choose for themselves, after counseling or completing a survey about their skills.)

San Francisco State in 2008 fully adopted stretch courses for students who did not score high enough on placement exams and then in 2012 began allowing students to choose whether that two-semester sequence or the one-semester course.

English department chair Sugie Goen-Salter researched “stretch” courses a decade ago at San Francisco State. She found that students who began stretch courses there with writing deficiencies ended up with higher retention and pass rates compared to similar students in remedial courses that offered no credit. Ninety-four percent finished the stretch sequence, compared to 88 percent in the remedial track, and of those who stayed, about 99 percent passed the stretch courses, ten points higher than those who started in remedial ones, her research showed. Plus the final essays in stretch classes showed higher level writing skills than the other group. The stretch sequence is “definitely better for students,” Goen-Salter said.

At Cal State San Bernardino, the switch to the stretch model was more complicated since the campus remains on the quarter calendar until 2020. So students can go directly into a one-quarter English composition course or take “stretch” versions that last two or three quarters, all for credit. Still, at least 83 percent of new students have completed that requirement within two years.

The stretch composition courses emphasize getting students to write clearly, rather than obsess about grammar rules, according to Karen Rowan, an English professor who is San Bernardino’s composition coordinator. To be sure, faculty correct grammatical mistakes and explain the right phrasing or punctuation. But Rowan said: “I would rather see a very thoughtful, well organized, deeply thought-out essay that has some sentence-level mistakes in it rather than a polished, perfect looking essay that says nothing.”

At Cal State Los Angeles, freshman Steve Burgos, of nearby Alhambra, said he was “a little upset” at first to be placed into Bowe’s stretch class: “Not upset at the school, more at myself. I believed I could have pushed myself to be a better writer.” But he soon came to appreciate how Bowe, unlike high school teachers, encouraged critical reading and the re-working of his writing and how two semesters allowed time for improvement.

Burgos wants to become an investments manager, a career that requires math but also “really good skills in writing and speaking.”

“If you have terrible grammar, I’m pretty sure it would cost you a promotion,” he said.