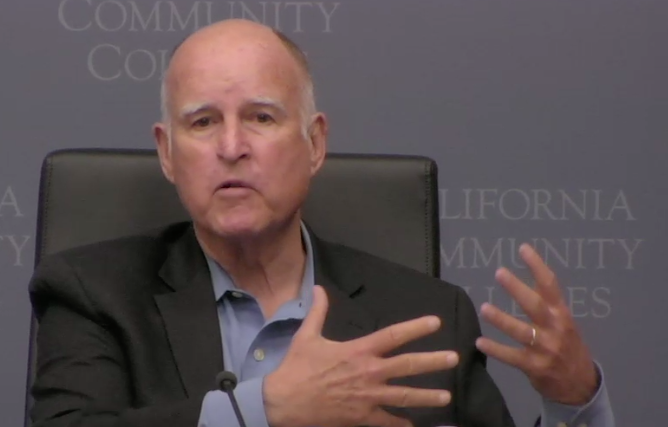 Declaring California a leader in online education, Gov. Jerry Brown was unequivocal about the promise of a new California online community college intended to serve workers seeking to improve their skills and urged its leaders to move quickly to get it up and running.

“California is a leader. It will lead in this. And I say, hallelujah,” Brown said. “Let’s get going.”

The Monday comments were part of the first meeting held by the Board of Governors of the California Community Colleges since the online college became law in June.

In response, the head of the Academic Senate representing the academic staff of the 114 community college system said that the faculty organization has dropped its opposition.

“The Senate was opposed to this option, but not the goals to serve students in this way, and now that it has been signed into law, the academic Senate’s opposition dies,” said John Stanskas, president of the Academic Senate for the California Community Colleges.

The online community college won approval from the Legislature last month despite months of fierce opposition from faculty and skepticism from some key lawmakers.

“This is a no-brainer, it is obvious, it is inevitable, it is a juggernaut that cannot be stopped,” Brown said of his vision for the new college that will become a key part of his legacy as he prepares to leave office at the end of the year.

Funding to launch the college, which will cost $100 million in start-up costs over seven years, is the latest expansion of the state’s community college system. Funding is included in the 2018-19 budget for the fiscal year that began July 1.

“We are essentially the board of trustees of the 115th college,” said board president Cecilia V. Estolano. “I had to appear at a couple of committee hearings when this was being debated and assure the members of the Legislature that this board was up to the task.”

“I have every faith that we will be able to carry out this duty, but it is additional work,” she added.

The online college is being touted as another tool to develop the work skills of so-called 2.5 million “stranded workers,” people between the ages of 25 and 34 who have finished high school and lack a college degree or certificate but could benefit from additional training to progress professionally. Unlike the missions of traditional community colleges, the online college will offer education programs that can be completed in about a year and are designed to address specific labor shortages.

Estolano said one challenge for the board will be balancing its two mandates of overseeing the college system and separately the online college. “We have different responsibilities, different obligations and we have to make sure we understand the distinction between those two roles.”

In addition to the start-up costs, the new college will get $20 million annually for ongoing spending. The college will also collect money the state gives other colleges to cover the cost of faculty pay and student instruction.

Another key difference between the online college and other community colleges will be its use of a learning technique called competency-based learning that rewards students for skills they’ve developed before entering college and that focuses more on job-related training that they can prove they’ve mastered. Such an approach means the college won’t follow a conventional academic calendar but will be more flexible to match the needs of the students and the degree programs they seek.

One consequence of the different design for the online college is that current online offerings at existing community colleges will not fit into the list of the courses the online college plans to offer. “We are talking about a fundamentally different kind of programming,” said Ajita Talwalker Menon, senior adviser to California Community Colleges Chancellor Eloy Ortiz Oakley.

Already the community college system announced two programs for jobs paying around $50,000 a year that don’t require a bachelor’s degree but do require some kind of college education — medical coding for workers who must identify the procedures medical offices provided to receive accurate payment from insurers and information technology training for networks and computers.

A flurry of activity awaits the college and the board before the first students are admitted. By the end of this year, the college will take key steps including hiring a CEO, outlining its business plan, evaluating the technologies it needs to deliver instruction and hiring a law firm.

In addition to urging the board to move quickly to launch the new college, Brown gave them some insight into his vision for the college. Explaining that he recently attended a meeting of researchers who study the cosmos, Brown said it’s important “we don’t lose sight of the fact that the human mind is capable of incredible imagination and creativity.”

Brown then suggested that the road toward a digital education has been in the works for decades. “I first started thinking about this stuff back in the last few years of my second term as governor,” in the early 1980s.

Obliquely addressing the initial pushback to the online college, Brown said “I understand these technological changes are threatening, are anxiety-provoking.”

“But they’re coming,” he said. “So I think it’s very important that the community colleges of California be in the forefront and are creating this framework that will serve people who are not being served.”