Wind tunnels and sheep brains: Students get their STEM wings at this L.A. school 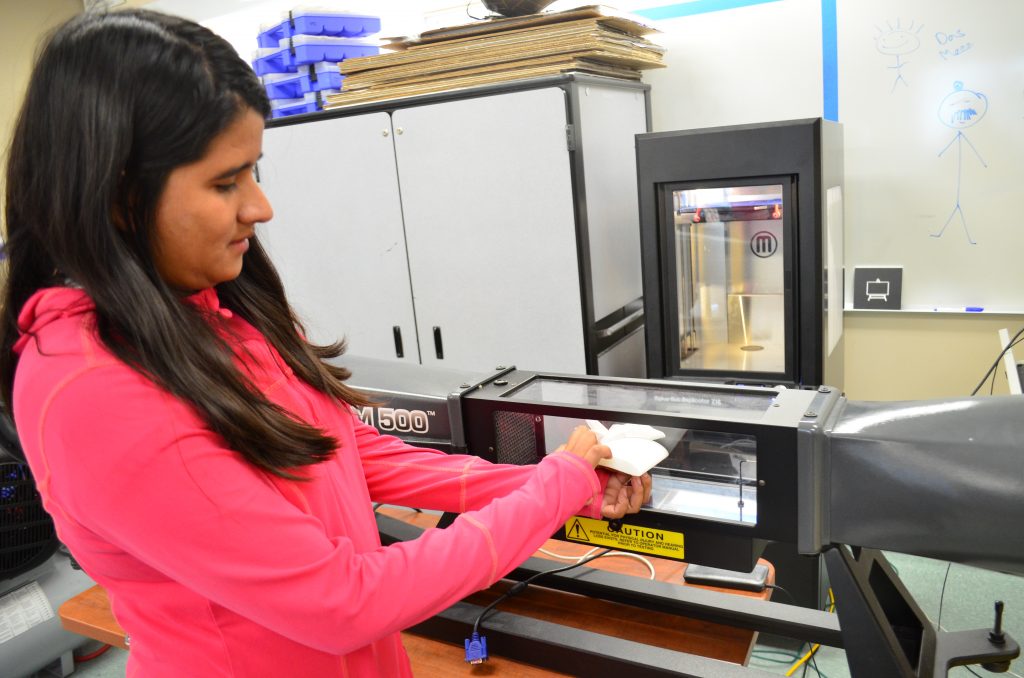 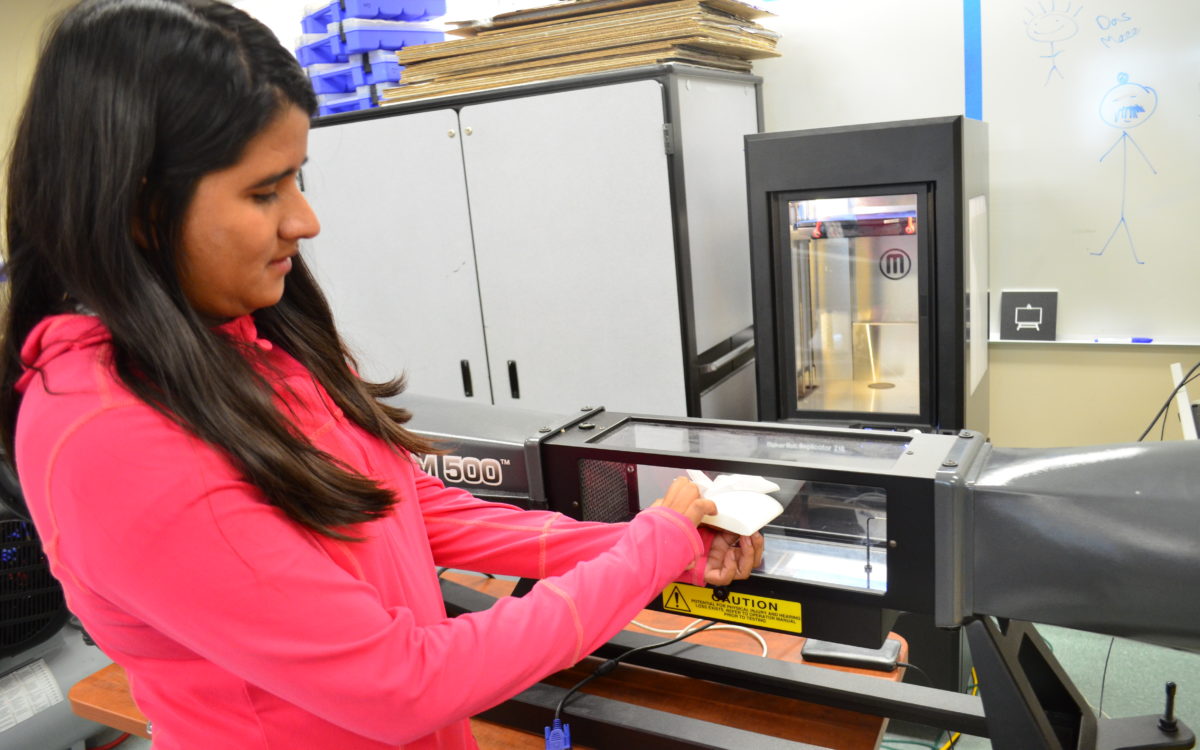 Mikhail Zinshteyn / EdSource
Keren Araujo, a senior at STEM Academy of Hollywood, shows off a wind tunnel and 3D printer

Mikhail Zinshteyn / EdSource
Keren Araujo, a senior at STEM Academy of Hollywood, shows off a wind tunnel and 3D printer

“We’re designing airfoils — they’re like the wings of a plane,” explained the 17-year-old. After Araujo and her fellow students put the finishing touches on their wing designs using a computer engineering program, they’ll ship the dimensions to the classroom’s 3D printer and create more model wings.

She then points to a tube about a foot wide and the length of a student. “This machine simulates the flow of wind — it’s called a wind tunnel,” Araujo said. She’ll use it to test whether her airfoil will fly through the air efficiently.

“You want it to be good throughout the whole flight,” she explained casually. “You don’t want a wing that’ll be good just for take off.”

Araujo is one of 563 students at STEM Academy in the Hollywood area of Los Angeles, part of a network of California high schools that’s rewriting the playbook for how students are both taught vocational skills and prepared for higher education.

All of STEM Academy’s students are placed in one of two career pathways — biomedicine or engineering. Students take a mix of college-preparatory and Advanced Placement courses on top of career-focused classes. In the aerospace engineering elective, which is geared for juniors and seniors, most of the students are also in pre-calculus or calculus and have taken physics, said the instructor, Julian Lewis, a retired aerospace engineer from Lockheed Martin with 34 years of experience and a career-technical education teaching credential.

The focus on supplying students with skills for college and career echoes a growing sentiment among both scholars and policy leaders; this month U.S. Secretary of Education Betsy DeVos said, “We need to stop forcing kids into believing a traditional four-year degree is the only pathway to success.”

In California, these campuses are buoyed by recent one-time state investments totaling nearly $1.5 billion through two grant programs: The $500 million California Career Pathways Trust program approved in 2013 and 2014, plus $900 million through the Career Technical Education Incentive Grant program passed in 2015 — in addition to various federal programs.

STEM Academy belongs to a model called Linked Learning, which emphasizes not only college and career prep but also on-the-job experience through internships and interactions with experts. It is one of eight schools in the Los Angeles Unified School District and one of 167 statewide certified as Linked Learning by the Linked Learning Alliance.

The district also has 39 high schools enrolling 18,000 students that offer some elements of Linked Learning.

At the STEM Academy, Lewis said he teaches his students to apply the concepts they learned in their math and science classes to the engineering problems that professionals confront daily. “He tries to teach us about work ethics, and not just about aerospace engineering but just jobs in general,” said Louis Perez, a senior in pre-calculus who last year took AP Physics and AP computer science.

Along the way, the students are gaining other work-relevant skills. Once they’ve designed the geometric shapes of their wings in an engineering program, they use Microsoft Excel to “clean” the data and scale up the dimensions of the wing by four so that it’s big enough to be imported into a 3D design program and built with the 3D printer.

The numbers extracted from the engineering program would result in a very small airfoil, Araujo said. “So that’s why we’re multiplying everything by four.”

Adds Perez: “Through the wind tunnel we get to modify how much wind is being blown into the airfoil.”

Just this year, STEM Academy introduced two programs taught on campus by community college instructors that will prepare students for certification exams. One of those enrolls about 30 students in a year-long course on AutoCAD — a leading drafting tool used by professionals such as architects and engineers to render plans for construction projects.

School principal Paul Hirsch said students could use their AutoCAD know-how to work from home or college to supplement their incomes as designers for companies. But beyond the potential payoff — entry level CAD designer jobs that typically pay $19 per hour to start — Hirsch also touts “the inspiration that comes from having a real-world 21st century skill” for his students.

Among Linked Learning schools, STEM Academy stands out in performance. Its seen improvement in a number of areas ranging from its graduation rate and test scores to the college readiness of its students.

“We’re seeing a lot of the change because of the support [Hirsch] is getting through Linked Learning,” said Esther Soliman, Linked Learning Administrator for Los Angeles Unified. “Getting kids to work side by side with professionals, a curriculum tied in with a career focus … these are all things that excite kids and make them want to learn.”

Plus, she said, students take the academics more seriously because they work with “people who might hire them in the future.”

How STEM Academy stands out

Principal Hirsch said support matters. “We are beneficiaries of a lot of resources,” said Hirsch. “An investment in a school when used right can really make a world of a difference.” He said it took “three or so years to get the culture piece right” before the academics took off. “And now it’s almost like you can’t stop it.”

(STEM Academy opened in 2010 as a pilot school — a district designation that grants it some flexibility with staffing and the curriculum. Students zoned for the school can attend. If there’s space, non-local students may enroll by permit.)

Hirsch concedes there’s room for improvement. While roughly 180 of the school’s 258 juniors and seniors are in one of a dozen AP subjects, only about 20 percent have earned a passing score on their AP exams, he said.

California’s investment in vocational training benefits Hirsch’s students directly. STEM Academy got $1.7 million from the $37 million in state funding to LAUSD. That money will go toward a medical center with observation rooms and mannequins to simulate different procedures for the biomedicine students. The school has also purchased three-dimensional anatomy tables that give students highly detailed visuals of the human body. Those will arrive in the next few weeks, said Hirsch.

The school tapped into $15 million in state pathway trust funds to train teachers at participating schools in linking workforce skills with the traditional academics they teach, said Soliman. STEM Academy applies the pathways money to also fund a summer bridge program for incoming 9th graders in the biomedicine program which Hirsch ballparks at $30,000. This year’s program saw students dissect sheep craniums to investigate the impact stress has on the brain.

The school also struck a deal with the hospital network Kaiser Permanente, pairing more than 40 juniors who are aspiring doctors with physicians for career counseling and trips to science museums.

But some of the resources Hirsch credits with improving the school may be running out of funding soon.

Unless Gov. Jerry Brown and the Legislature earmark more funding for the Career Pathways grant or something similar, those dollars and the summer bridge program that pay for it are gone by June of 2018.

Hirsch is also facing the loss of two full-time counselors plus three college-prep assistants because two grants — Promise Neighborhoods program and Youth CareerConnect grants — are expiring by the end of this school year. The district is hoping the federal government will extend some of those funds.

For students like Araujo, though, the future is all about college and majoring in environmental studies. She’s already making connections between wing efficiency and clean air.

“If we could produce some airplanes that are efficient and use a little bit of gas, that’ll be really good for the environment.”