What's that on my California college bill? Fresno's vote may signal a wider rebellion 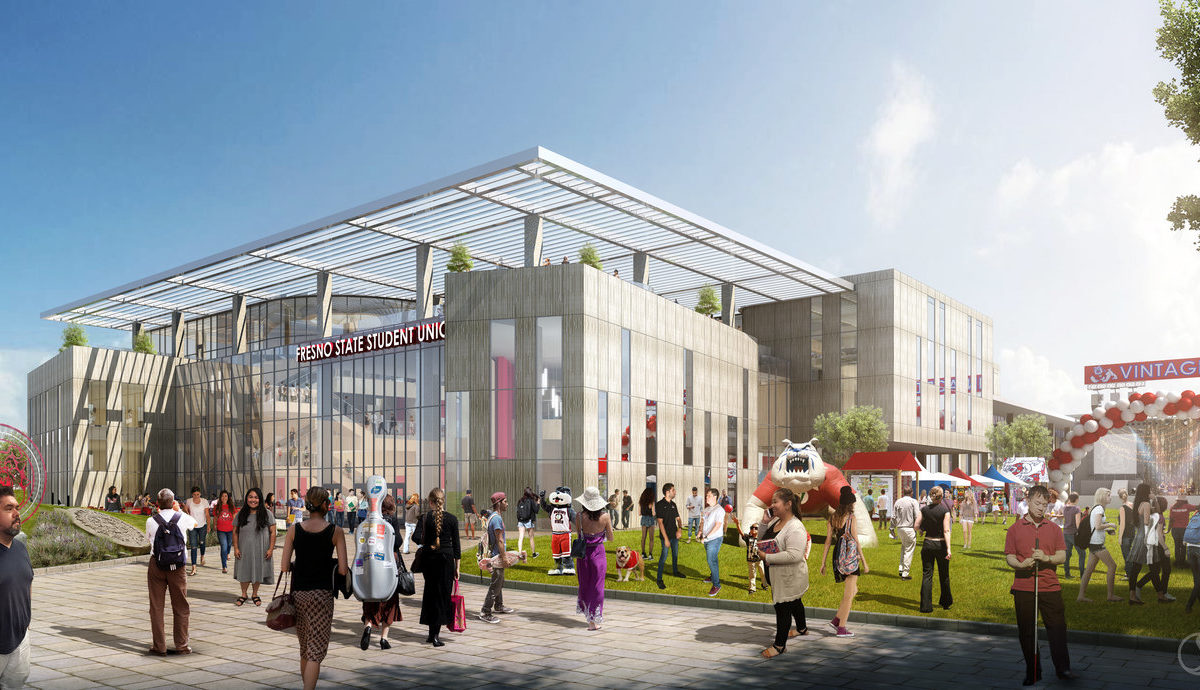 Fresno State University
Image of a proposed new student union at Fresno State. A student voted defeated the plan, but another vote is scheduled.

Fresno State University
Image of a proposed new student union at Fresno State. A student voted defeated the plan, but another vote is scheduled.

Students at Fresno State earlier this year voted against a $400 annual fee increase that would have financed construction of a new student union there. That rejection, some activists say, may signify a wider rebellion across California public universities against campus fees that often add $1,500 a year to mandatory costs on top of tuition.

Those fees usually appear on education bills as a dozen or so extra charges for health services, recreation programs, student government, transit subsidies and other, often popular and important functions. Administrators note that tuition funds and state revenues can not be used for those non-classroom purposes.

Steep increases in fees this year at several Cal States have triggered affordability worries because financial aid often does not cover those charges.  The push back on fees also comes at a time when many students fear that tuition may go up next fall for the second year in a row. The defeat of the proposed $400 annual fee hike at Cal State Fresno last March showed how opposition can be mobilized among students who fear that increasing costs could push them into part-time enrollment and delay their graduation by years.

Many students come to Fresno State because “costs are lower” than UC or private schools and they pay close attention to their education bills, according to Joe Blair, a student senator who is a senior there and opposed the fee increase. “The four hundred dollars seemed pretty unreasonable,” especially if tuition goes up again, said Blair, who receives no financial aid and juggles school with a full-time job as a car salesman.

So although he plans to finish his undergraduate degree before the fee was supposed to kick in, Blair said he and opponents of the proposal voted with a younger generation in mind and will do so again in a scheduled re-vote in three months. “Putting the burden on the future people, who are not even able to vote for it, is a little unfair,” he said.

Administrators say that students more often embrace such fees as a way to get benefits that tuition and state subsidies are not allowed to cover. Among those are tutoring programs, counseling, health clinics, student government and media and entertainment events. Some big-ticket items like student union buildings must be approved by a vote of the entire student body while other fees can be imposed by administrators after input from student groups.

Campus fees average $1,474 across the 23 Cal States. That’s on top of the $5,742 in tuition, plus the costs for housing, food and other costs. Those Cal State campus fees range widely from $843 at Fresno campus to $3,690 at Cal Poly San Luis Obispo, according to university statistics.

The Cal State fees rose on average by $68 this year. The biggest jump was at San Francisco State, where the fees jumped up $500 to $1,512 to finance a new recreation and wellness center and to subsidize mass transit passes. At CSU Monterey Bay, a $394 hike, to a $1,301 total, came as a result of student-approved levies to finance a new student union and other services.

At a recent Cal State trustees meeting, Monterey Bay professor Rafael Gomez urged officials to block further increases in campus charges. “Those fees are becoming an impediment for an increasing number of students to finish their degrees,” said Gomez, who teaches Spanish literature.

Maggie White, president of the California State Student Association, which represents all Cal State schools, said the increase in campus fees often is caused by the lack of state investment for such basic services as mental health counseling. “We want these services on campus but we don’t think the responsibility to pay for them should lie with the students. Affordability is a top concern especially with California being such an expensive place to live and afford,” she said.

While students are given a say in most fee hike proposals, White said it is unfair to even ask students to assess themselves to construct and operate buildings like student unions that she said should be paid for by the state. Administrators contend that such buildings are not part of the core academic mission that can be funded with tuition and tax revenues. But White, who is a graduate student at Cal State Stanislaus, pointed out that the centers are often filled with computer labs and study rooms that are just as important to student success as classrooms.

About a decade ago, controversy focused on an additional category of campus fees, labeled “student success” charges, that significantly added to student bills. Begun in 2008 in response to the financial crisis and cutbacks in state funding, these fees pay for academic counselors, technology and Internet, tutors, library services and even to hire new faculty. But after criticism that the charges were a sneaky way to get more tuition revenue, the state legislature and university put limits on them and now require student body votes for any new ones. Twelve Cal States now charge “success” fees, ranging from $173 a year at San Bernardino to $833 at San Luis Obispo.

Explaining why some fees are unpopular, students emphasize that state-funded Cal Grants usually do not provide financial aid for anything beyond tuition. Low-income Cal State students can use their other aid such as federal Pell grants and loans to help cover campus fees if any money remains after housing and food bills but that aid does not necessarily rise to match campus costs.

The situation is different at the nine UC undergraduate campuses. UC fees are not as controversial in part because at least 25 percent of the revenue from most of them must be set aside to provide additional financial aid so that low-income students can afford those increases, according to system policy. No such set-aside exists for Cal State undergraduates.

UC’s average campus-based fees this year total $1,334, with the most expensive at UC Santa Barbara, $1,821.  Those are in addition to UC’s $11,502 tuition and its mandatory system wide $1,128 student service fee which covers health, technology, career support and cultural programs among other services.

Much interest statewide will be centered on whether UC and Cal State should again increase their tuition, which went up this year for the first time in six years. That’s why it is especially important to keep the campus fees low, according to Monterey Bay professor Gomez. Even though the fees provide benefits to students, they are “hidden costs” that could drive students away from school, he added.

At CSU Monterey Bay, Ronnie Higgs, vice president of student affairs and enrollment services, said that the $1,300 in total campus fees “is substantial” but he emphasized that students approved the increases to pay for improved recreation and athletics programs as well as for the new student union building set to open in 2019. Despite the additional costs, the general feeling on campus was that the facilities and serves were needed “to catch up with the times,” he said.

Of the $500 rise in campus fees at San Francisco State this year, $140 helps to finance a new recreation and wellness center and $360 supports a new transit program that allows students to ride free or with a discount on area mass transit. Even the many commuter students who drive their own cars to school and buy parking passes must pay those transit fees; perhaps winning some of their votes, the cause was pitched in part as a pro-environment move to reduce carbon emissions.

However, the tug between potentially good causes and higher bills has played out differently at Fresno State so far. In March, the referendum to increase fees by $400 a year to build a new $80 million student center was defeated 1,846 to 1,217 even though those extra charges would not kick in until the proposed building opened several years from now. Opponents said they were unwilling to pay those bills when other needs felt more pressing, such as improving classrooms and computer facilities.

Blake Zante, student body president, who supported the fee hike, acknowledged that “costs for any college student is a big concern and definitely for our campus.” He noted that many Fresno students are on financial aid and are first in their families to attend college.

But, after much discussion, he said, the issue will be back on the student ballot in March — but for a lower amount. The proposed annual charges will be $298 and officials are promising that private fundraising will help make up the difference. Also the building would now house more student services — even pods where commuter students can take a nap between classes, Zante said.

Frank Lamas, Fresno State’s vice president for student affairs and enrollment management, emphasized that the fees are the smallest in the system in part because officials know that many Central Valley students come from low-income families. And he said that the university has been working hard to renovate classrooms with other funds. But the old student union building is now obsolete and too small. So he hopes the upcoming referendum succeeds. “We wouldn’t be doing this if there were another way to do it,” he said, emphasizing that the university is not allowed to use tuition or operating funds on such projects.

“Students who are here now will leave a legacy for the future for people who come after them,” Lamas said.