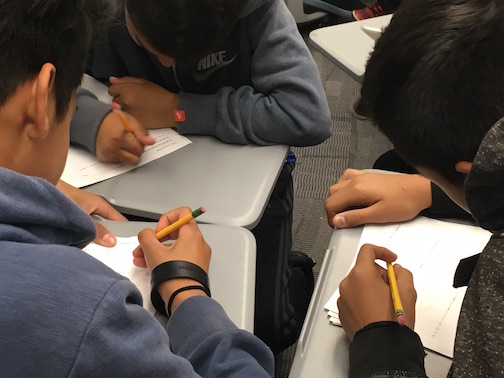 Cesar Conriquez, 12, was doing OK in math until 4th grade, when the curriculum turned to division. He got stuck. Really stuck. As his class moved on to more complex mathematical equations, Cesar was increasingly mired in confusion, and his grades in 4th and 5th grade plummeted.

“My teacher was helping me out but I still didn’t get it. Fractions, whole numbers … I couldn’t do it. It was stressing me out,” said the Pittsburg youth. “I wasn’t happy with my report card and my parents weren’t either. So I asked if I could get extra help.”

His parents enrolled him in Pittsburg Unified’s Summer Math Institute, a free, five-week intensive math program for middle-school students of all abilities, with special classes for students whose math skills are several grades below where they should be.

Cesar’s struggles with simple math are not unique. Twenty-eight percent of California’s fourth graders scored “below basic” on the National Assessment of Educational Progress 2015 math test, meaning they were unable to perform simple computations with whole numbers and had little understanding of fractions or decimals.

For eighth graders, the results were even worse. Thirty-six percent scored below basic, which means they couldn’t perform fundamental algebra or use graphs or charts to solve math problems. And as math curriculum progresses, students find themselves increasingly lost.

“It’s not just about knowing how to do advanced algebra. Math literacy is a crucial part of citizenship. You need to know how credit cards work, whether you can afford to buy a home,” said Babette Benken, a professor in the math and statistics department at Cal State Long Beach who specializes in K-12 math education. “If you can’t do math at a certain level, your options become very limited.”

School districts around California are creating programs to help students at the very lowest math levels. Some students are just a few grade levels behind, but some have floundered since kindergarten, developing math mental blocks as young as age 5. Teachers at high-poverty middle schools say it’s not unusual to see students who struggle with basic arithmetic and even counting.

“Year after year I’d have kids — 8-year-olds — who didn’t recognize that numbers represent quantities,” said Robin Lovell, the elementary math coordinator at Oakland Unified. “This would interfere with their ability to access grade level math, and often cause huge frustration. I spent a lot of out-of-class time on this basic notion, and helping them understand the value of ones, tens, hundreds and thousands.”

Most children begin learning the concept of numbers long before they start school. Throughout their toddler and preschool days, they’ll learn that numbers have a sequence that corresponds to quantity, and that numbers have a constancy. For example, three is always three, whether it’s three marbles or three bananas or three baseballs. Three only stops being three when you add something or take something away.

But children who haven’t been to preschool, or otherwise missed some of those basic concepts, might be a little lost when a kindergarten teacher asks which is greater, 5 or 8, Benken said. Although California’s kindergarten math curriculum standards assume a student has no prior knowledge, some children can already count to 20 when they start school while others don’t know that the numeral 2 represents two objects.

Teachers will often give extra help to those children, or recognize a learning disability, but sometimes that’s not enough. Students can develop aversions to math from an early age and in some cases struggle with numbers throughout their K-12 educations. Remedial math requirements pose a significant hurdle at California State University and community college systems, keeping thousands of students from completing their degrees.

But that doesn’t mean those students aren’t natural mathematicians or can’t catch up. Lovell said she once had a 5th grade student who lagged severely in math, but on a visit to his home she saw that he was doing flawless accounting for the family’s cheese business. With a little extra tutoring, he was soon doing math equations at grade level.

Oakland Unified offers tutoring, online math lessons, help for teachers and other resources to assist students who lag in math. More than 12,400 students — about a quarter of the district’s total enrollment of nearly 50,000 — use an online tutorial program called ST Math.

But the problem might go beyond classroom tutoring, said Eduardo Solorzano, the district’s administrator for middle school instruction.

At Pittsburg Unified, where 12-year-old Cesar Conriquez is enrolled in the Summer Math Institute, teacher Hari Brown said he spends as much time improving students’ attitudes toward math as he spends on actual math computations.

“When you’re so used to being defeated at something, of course you don’t like it,” he said. “I tell the kids I hate roller skating. I suck at roller skating. Why? Because I don’t know how to roller skate. But once you learn how to do something, you start to like it. We have to raise our expectations for these students, not let them make excuses or get away with saying, ‘I’m bad at math, I can’t do this.’ They can do it.”

Brown starts the summer program by giving students a 45-question test on basic addition, subtraction, multiplication and division. This summer, no student scored higher than 25, and several only had four correct. Then he breaks down the material to its most fundamental level — whole numbers, for example — and keeps testing. If a student needs extra help, he has them work with a tutor. Eventually, once they start scoring 90 percent on tests, the students develop confidence and learning becomes easier.

“I see more growth in this program than in anything else I do,” he said. “I tell them, when you care, when you put in the hard work, you will see results. All districts should have a program like this.”

The program is in its 18th year. Held at Los Medanos Community College, the Institute is open to 200 middle school students and has an 85-90 percent completion rate, said coordinator Phillip Lucido. Classes are six hours a day, four days a week, with college tours and field trips on Fridays.

Montel Brown was a student in the Summer Math Institute as a 6th grader and now, as a college student, works there as an assistant. The program changed his academic trajectory, he said.

“I was so behind. I didn’t know my multiplication tables or fractions. I used to spend hours on my homework and still never got it. I was even held back one year,” he said. “Here, they give you a great support system, and time to really work on it until you understand. It just all clicked for me. Everything all gravitated up after that.”

Brown, a student at Southern University in Baton Rouge, La., plans to earn a history degree and return to Pittsburg to teach high school — inspired to teach, he said, by his experience in the Summer Math Institute.

Another alum, Daniella Castro, also credits the Summer Math Institute with altering the course of her schooling. Once at the bottom tier of middle-school math, she’s now senior psychology major at Sacramento State and works as a math tutor at the program.

“When I was in the program, they went over the material with me so I could learn what I was doing wrong, and correct it,” she said. “So when I started school in the fall, math was a lot easier. They also let me know I could go to college. It all made a huge difference.”

For Cesar Conriquez, the results have been dramatic. Cesar scored 61 percent on the basic math test when he started the program, and 97 percent on a test just two weeks later, after Brown broke down the material into sections and focused intensely on areas that Cesar had been stuck on. Cesar said he likes math again, and now wants to be an engineer someday.

His friend Kylil Carpenter, also 12, said math is now something it’s never been for him: Easy.

“I like math,” he said, noting that his test scores went from 54 percent to 96 percent after Brown went over each mathematical function slowly and in depth. “It’s fun to get the mechanics, solve the problems. I used to have a really hard time with math, but it’s all pretty good now.”