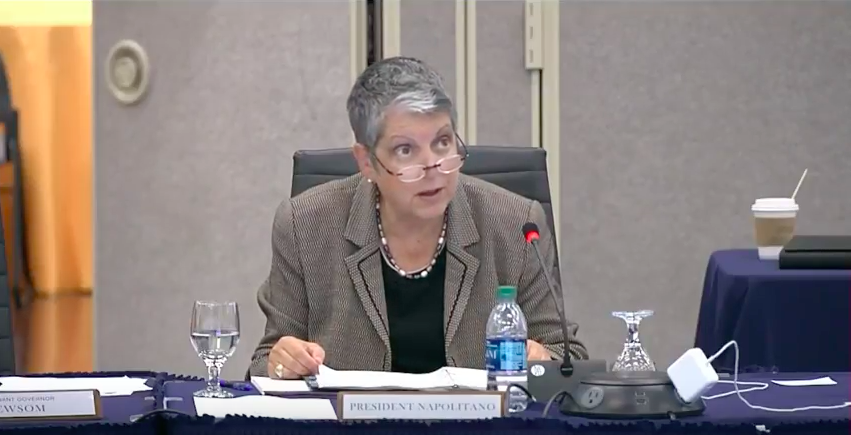 Source: YouTube/UC Board of Regents (screenshot)

Source: YouTube/UC Board of Regents (screenshot)

The University of California Board of Regents is debating possible tuition hikes for 2018-19 and changes to how incoming students prove they’ve earned the grades and test scores they reported in their applications.

The discussions Wednesday centered around University of California’s budget for next year and whether tuition hikes are needed to meet its fiscal goals. Budget documents made available by the finance committee of the Board of Regents, which oversees the 10 campuses of the UC system, don’t propose any definitive tuition hike, but float the idea of increasing tuition and fees by another $348 on top of the current $12,630 for California residents.

A formal recommendation is expected in November, when the Regents will debate whether to enact the second consecutive increase after a six-year-long tuition freeze.

The action came in response to a fiasco this year in which UC Irvine rescinded the admissions offers to nearly 500 students as a result of issues with verifying student transcripts. The debacle saw many students receiving letters that their admission status was overturned because of missed paperwork deadlines. The university expects to ultimately reverse its decision for roughly 450 of those students, said UC Irvine Chancellor Howard Gillman.

The school is in the midst of an audit to determine what went wrong. Gillman promised “that these mistakes will not happen again.”

The audit will determine why the Irvine campus over-enrolled more than 800 California residents. Students and parents allege the university was trying to reduce enrollment by being overly strict. The university denied this in previous media reports.

Gilman apologized “to everyone who was affected by these mistakes, especially our wonderful students and their families who went through unacceptable distress.”

He also praised the university’s admissions staff “who are proud to help so many great students find their way to our campus and who this year ended up in an impossible position.”

When students apply to a UC and other selective universities, they self-report their grades, the courses they’ve taken, and test score results. Students who are admitted to a UC then must meet early July deadlines to submit their official high school or community college transcripts and exam results.

Last year, the University of California system received 210,384 applications for admission to its nine undergraduate campuses, admitting 132,860 students and enrolling 69,608 students, according to a Regents memo.

Most UC campuses rescind anywhere from a few dozen to several hundred students each because students incorrectly reported their high school grades, failed to turn in their documents because they opted to attend another school, or performed poorly during their final term of high school, among other reasons. Still, 97.5 percent of students submitted their paperwork on time in 2016, according to the Regents memo.

UC Irvine’s chancellor faulted the school’s handling of the debacle. “For reasons I cannot explain at this time, unacceptably terse and unhelpful withdrawal notifications were sent to those 500 students,” Gillman said.

That incident prompted Napolitano to create the Admissions Verification Task Force, which will “evaluate current procedures and recommend policies and best practices in order to standardize and make UC’s academic verification process more effective, efficient and student-friendly,” according to a UC press release.

The UC Admissions task force will consider the following items and present its findings at the November Regents meeting:

Chairing the task force is provost and executive vice president Michael Brown. Other members will include campus officials, the Academic Senate, the student body and the Office of the President.

Regarding tuition, this fall saw the first increases to tuition and fees at the University of California system since 2010-11. The increases for 2017-18 bumped up tuition and fees 2.7 percent to $12,630 for in-state undergraduates. The increase is expected to provide the UC campuses an estimated $48 million in extra revenue, according to budget documents.

Increases in tuition to the system don’t translate into increased costs for all students, university officials said.

In addition to state and federal grant aid to low-income students, UC manages its own grant aid program that pulls a percentage of revenue collected from the tuition and fees all students pay. If UC does go forward with another tuition hike of $348, an estimated 100,000 low-income students would actually end up paying slightly less in tuition because of the additional grant aid they’d receive.

Because of financial support from the UC, the state’s Cal Grant program and the federal Pell Grant, 58 percent of UC undergraduates from California don’t pay any tuition, according to a graphic provided by UC officials.

But tuition is only a portion of what students must pay for the cost of their education. Housing and living expenses, plus other costs, mean even the poorest students may need to find a way to contribute $10,000 a year to their educations. Work-study programs and summer job programs may net the student $5,000; federal loans can cover the rest.

Napolitano said during the committee hearing on finance that the UC system faces fiscal obstacles despite winning increased funding in this year’s budget. She noted that the 2017 state budget “calls upon the university to enroll at least 1,500 more California resident undergraduates in 2018-19 without any assurance of incremental state support for that enrollment growth. The Budget Act specifies that UC should reallocate existing funds to support this enrollment increase.”

There’s also uncertainty over how much additional support will go to UC in the state 2018-19 budget, said Nathan Brostrom, the system’s chief financial office and executive vice president.