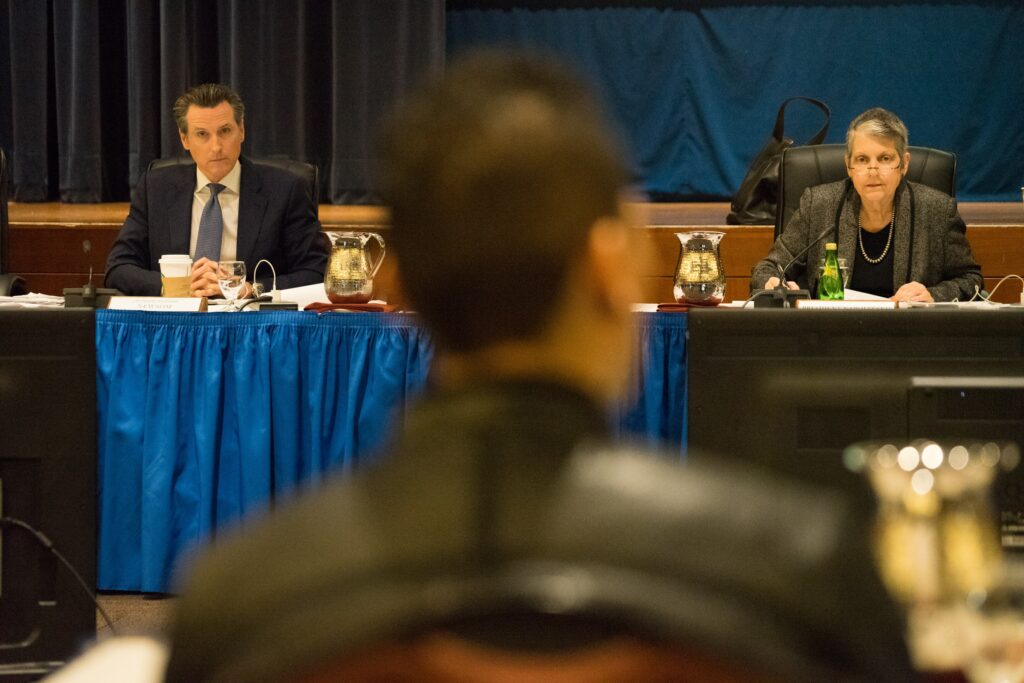 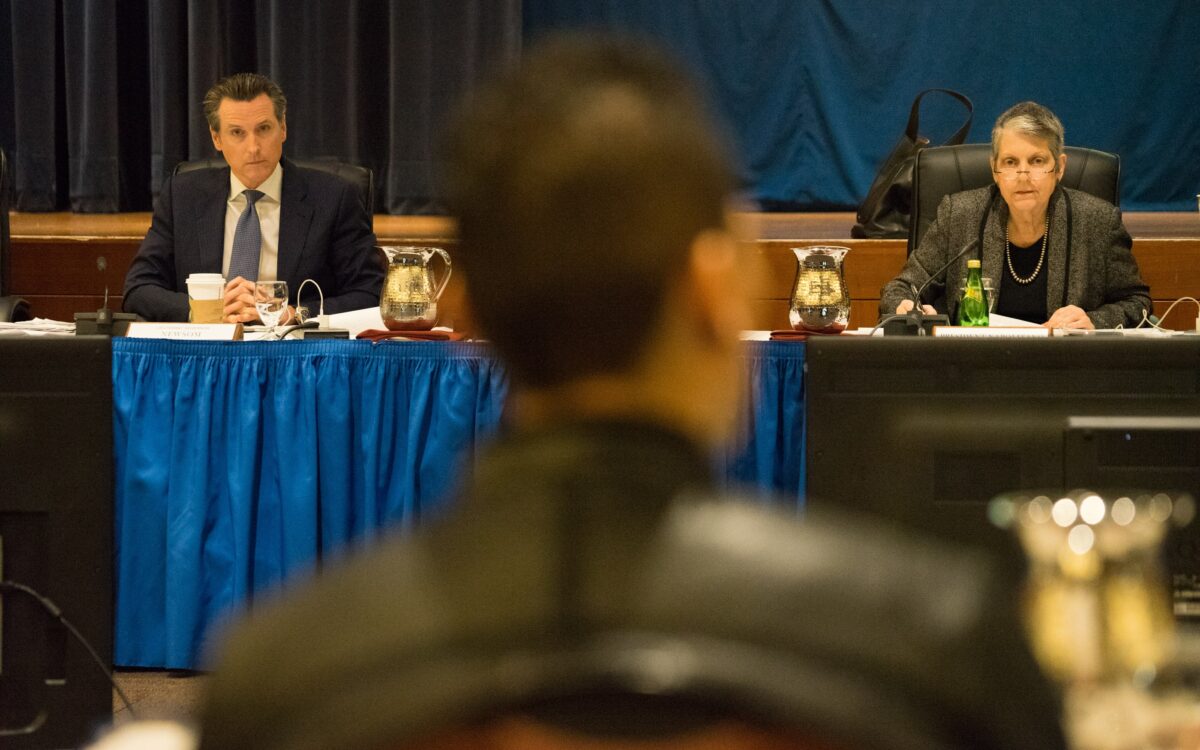 Credit: James Tensuan for EdSource Today
Lt. Gov. Gavin Newsom and UC president Janet Napolitano listen to UC student leader Ralph Washington Jr. address the UC Regents before the board voted to increase tuition. Newsom voted against the hike and Napolitano for it.

Credit: James Tensuan for EdSource Today
Lt. Gov. Gavin Newsom and UC president Janet Napolitano listen to UC student leader Ralph Washington Jr. address the UC Regents before the board voted to increase tuition. Newsom voted against the hike and Napolitano for it.

Tuition for California undergraduates at the University of California will increase for the first time in six years next fall – a $336, or 2.7 percent, hike that university officials said is needed to expand enrollment and faculty. But critics contended it would limit access for students and scare away some applicants.

The UC Board of Regents voted overwhelmingly Thursday to raise tuition and mandatory systemwide fees for state resident undergraduates to $12,630 in 2017-18. (With room, board, books and campus-based fees, the total cost is often about $30,000.) UC officials emphasized that two-thirds of those students will receive additional financial aid to cover the increase and that other revenues from the tuition increase will be used to add courses, bolster counseling services and improve facilities.

However, opponents said that middle-class students could be most harmed, especially if Gov. Jerry Brown succeeds with his plan to phase out grants aimed to help them. Some said that low-income potential applicants may not know that they qualify for aid and decide to not even try to win admission at one of UC’s nine undergraduate campuses because of the price they see listed in catalogs and websites.

“There is a scary factor of sticker shock,” said regent John Pérez, the former state Assembly speaker, who voted against the tuition measure Thursday. In addition, he and other opponents said that any extra financial aid could not keep up with the rapidly rising costs of off-campus housing around the state.

The regents voted 16-4 Thursday for the increase at a UC San Francisco meeting that was surprisingly subdued and attracted few protesters, a tiny group compared to similar past meetings. Student leaders said the turnout was so small because the tuition increase was considered a done deal.

Joining Pérez in opposition were Lt. Gov. Gavin Newsom, State Superintendent of Public Instruction Tom Torlakson and student regent Marcela Ramirez. Brown, who is also a regent, did not attend, although he previously said he thought the increase was “probably needed.”

UC system President Janet Napolitano urged the approval the day before, explaining that the additional money would, among other things, help UC expand enrollment of undergraduate California residents by about 5,000 over the next two years above the 175,500 this past fall. She depicted it as an issue of providing access and maintaining academic excellence, saying the tuition increase is needed so “this generation and future generations of UC students receive the same quality of education as past generations.” Napolitano, who just 10 days ago was hospitalized for ill effects of treatment for cancer, noted that the university had improved its efficiency in energy costs, insurance, group purchasing and other matters.

But student leaders pleaded with the regents not to approve the hike, or at least wait until the Legislature finalizes a state budget later in the spring. After the vote, Ralph Washington Jr., president of the UC Student Association, said he was disappointed and predicted that the increase will “definitely make it harder” for students whose costs are not covered by aid. “It will affect the choices you make on how you spend your money, the food you choose to buy, where you choose to live, your books,” he said.

While it makes no difference to students’ wallets, the measure actually involved two components: a $282 increase in tuition and a $54 increase in the student service fee. The UC agenda repeatedly noted that low-income students would feel no effect and contended that “the modest level of the proposed adjustments should be manageable for those who do not receive financial aid.”

UC undergraduates from other states and nations will face a much bigger increase. Their tuition and mandatory system fees will rise by $1,688 to $40,644, not including living costs. The UC system in recent years significantly increased the numbers of those non-California students to garner the extra revenues they pay; but that has triggered controversy, and the regents are considering new limits on such enrollment. UC aid to those students is being phased out.

In a budget deal with UC two years ago, Brown said tuition could stay frozen through this current academic year in exchange for 4 percent annual increases in state funding and UC efforts to improve transfer and graduation rates. That agreement said modest tuition hikes, linked to inflation but no more than 5 percent, could start again in 2017-18. And that seemed to be the playbook followed Thursday.

However, Brown earlier this month upset families and legislators by proposing to phase out over the next four years the middle-class Cal Grants that provide aid to families who earn between $80,000 and $150,000 a year. About 9,000 UC students receive those grants which, depending on income, can be as much as $3,688 this year, according to the California Student Aid Commission, which administers the grants. Several regents who supported the tuition increase said they would urge the governor to change his mind and would ask legislators to maintain the program.

Meanwhile, California’s other large public university system, California State University, is starting its own debate about potential tuition increases after a long freeze. The CSU trustees are scheduled to meet in Long Beach next week and discuss a proposal that could result in a $270, or 5 percent, increase from what is now $5,472 a year. However, the CSU trustees are not expected to vote on any increase before March, officials said.

Debbie Cochrane, vice president of the Institute for College Access & Success, an Oakland-based nonprofit that seeks to keep college affordable, said that UC, bolstered by the Cal Grant system, offers some of the most generous financial aid among public universities across the country. However, she said its overall costs were high compared with other four-year schools and that even a relatively small increase like that approved Thursday could affect some families who don’t receive aid.

“That’s a concern,” she said. She added that UC needs to communicate better with high school students about potential aid so they are not scared away. “Sticker shock for potential students is real,” she said.