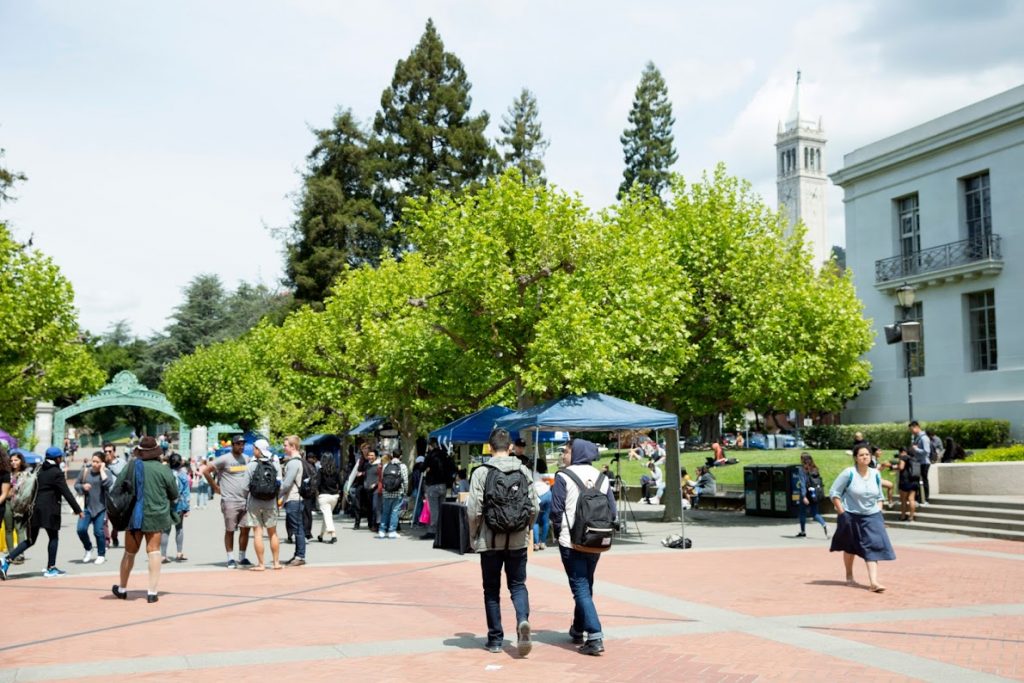 Alison Yin for EdSource
Students at UC Berkeley this spring. The campus has one of the lowest admission rates in the UC system.

Alison Yin for EdSource
Students at UC Berkeley this spring. The campus has one of the lowest admission rates in the UC system.

The University of California offered freshmen admission for the upcoming fall to an increasing number of students from other states and nations despite political controversy and its own efforts to cap the ranks of non-residents starting next year.

The admission offers to Californians declined slightly but university officials said they still expect a rise in the number of state residents who will enroll for the 2017-18 school year and not much change in the ranks of students from elsewhere.

University statistics released Thursday show 69,972 in-state students were offered admission to at least one of the UC system’s  nine undergraduate campuses, a 1.7 percent decline from last year when there were large increases in Californians’ admissions and enrollments.  Meanwhile, 36,039 non-Californians were offered freshman admission for the upcoming fall, about a 4 percent rise from last year.

UC officials say they won’t know until the fall how many students in either category will actually enroll at the university system or decide to attend college elsewhere. But they say that UC remains on track with the three-year, state-funded plan to enroll 10,000 additional California undergraduates — both freshmen and transfers — by fall 2018. They say they expect to add 2,500 California residents in the fall, about two-thirds of them freshmen. Last year UC beat its enrollment target of 5,000 additional Californians.

UC “is making excellent progress” toward reaching the 10,000 goal,” Stephen Handel, UC’s associate vice president of undergraduate admissions, told reporters in a telephone conference Thursday. And while the upcoming gains appear “more modest” than last year’s, “looking back one year I don’t think tells the entire story,” he added.

The number of students studying at UC from other states and nations skyrocketed in the past decade, from about 5 percent in 2006 to 16.5 percent of all 210,170 undergraduates in the school year just ended.  Those students pay much higher tuition than in-staters and those revenues are coveted by the campuses.

But with California parents fearing their children were being squeezed out, the legislature last year threatened to reduce funding if the university did not move to limit out-of-state enrollment.  UC denied that any qualified Californians were being pushed out yet in May adopted caps that will go into effect in 2018 and allow some campuses to add non-residents while freezing others.

Clearly sensitive about the topic, UC officials’ announcement Thursday about the statistics emphasized that UC admissions offers to California resident freshmen have increased by 13.2 percent since fall 2015.

Across the system, 62.6 percent of the record high 111,856 California freshmen applicants were accepted; that was down from 67.5 percent last year.  The acceptance rate for international students was 67.2 percent, up from 63.2 percent last year, and the rate for Americans from other states was 54.1, up from 50.9.

Handel said those figures may not lead to a higher proportion of out-of-state students since California students tend to enroll at much higher rates and students from other states and nations may be scared off by significant increases in their tuition at UC.

The number of admission offers to students transferring from California community colleges was up 3.4 percent from last year to 21,593.  That represents an 18 percent rise over two years, partly in response to requirements in the state budget.

Among ethnic and racial categories, the share of white students among the freshmen accepted pool continued to drop as Latinos, Asian-Americans and African-Americans all grew slightly.  Whites comprised 23.8 percent of those offered admission, compared to 25.1 last year; Asian Americans were 34.2 percent; Latinos 33.2 and blacks, 5.0.

Latinos are showing the fastest rate of growth, a trend that Handel said concurs with demographic changes in the state and “directly reflects what is going on in California high schools.”

While state law forbids race and ethnicity to be considered in admissions decisions at state schools, UC does look at such factors as the hardships students may have overcome in their education and offers admission to students who are within the top 9 percent academically of their local high school. That keeps the process “race neutral” but helps produce diversity, Handel said.

The share of accepted California freshmen who would be the first in their family to graduate from a four-year college rose to 43 percent from 42.7 percent last fall.

“We welcome this accomplished, talented group of applicants to the university,” UC President Janet Napolitano said in a statement. “All of us — in California, and throughout the nation and world — will be enriched by their talent, curiosity and drive to learn and succeed. The University of California educates the best and the brightest true to our mission of education, research and public service.”

In May, the UC regents adopted a compromise policy that will freeze undergraduate enrollment of non-Californians at the Berkeley, San Diego, Los Angeles and Irvine campuses, where the percentages of non-Californians range from 24.4 percent to 18.9 percent; those schools will not be allowed to increase beyond the levels of the 2017-18 school year. The other five campuses, where the share ranges from 14.7 percent at Davis to less than 1 percent at Merced, will be allowed to grow that enrollment to 18 percent.

In the statistics released Thursday, the Berkeley campus showed the largest growth in non-California offers among the four to be frozen at the 2017-18 level. It offered admission to 5,862 of them, 1,173 more than last year.  Handel said it is too soon to say whether that will translate into higher enrollment of those students in the fall.