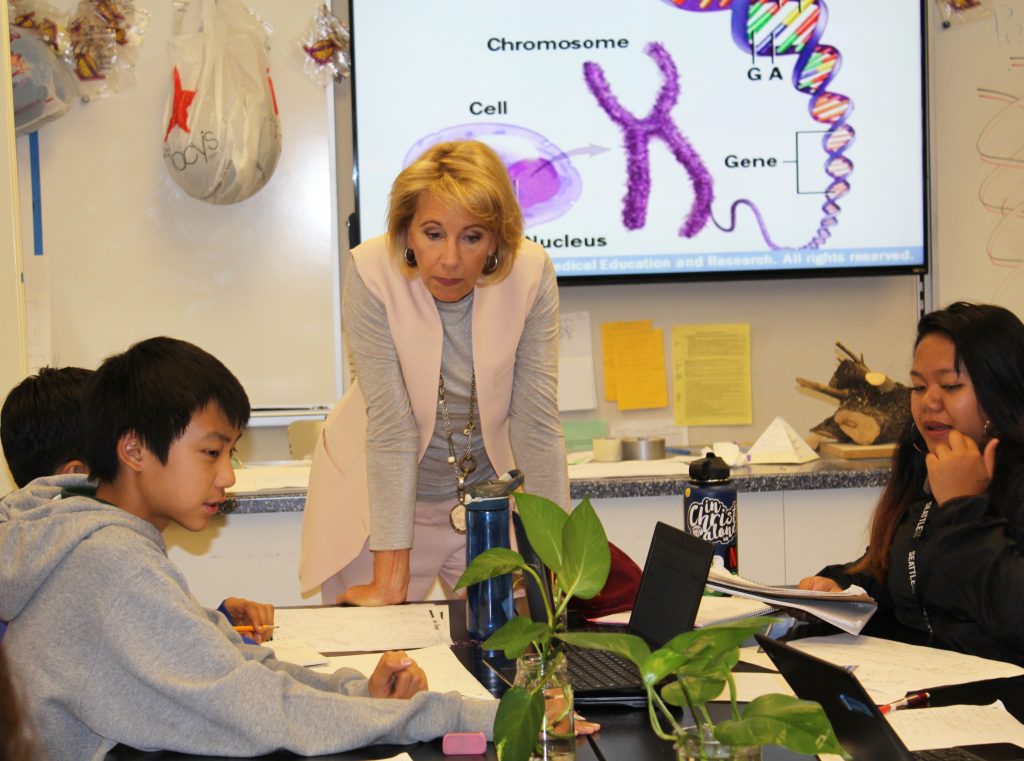 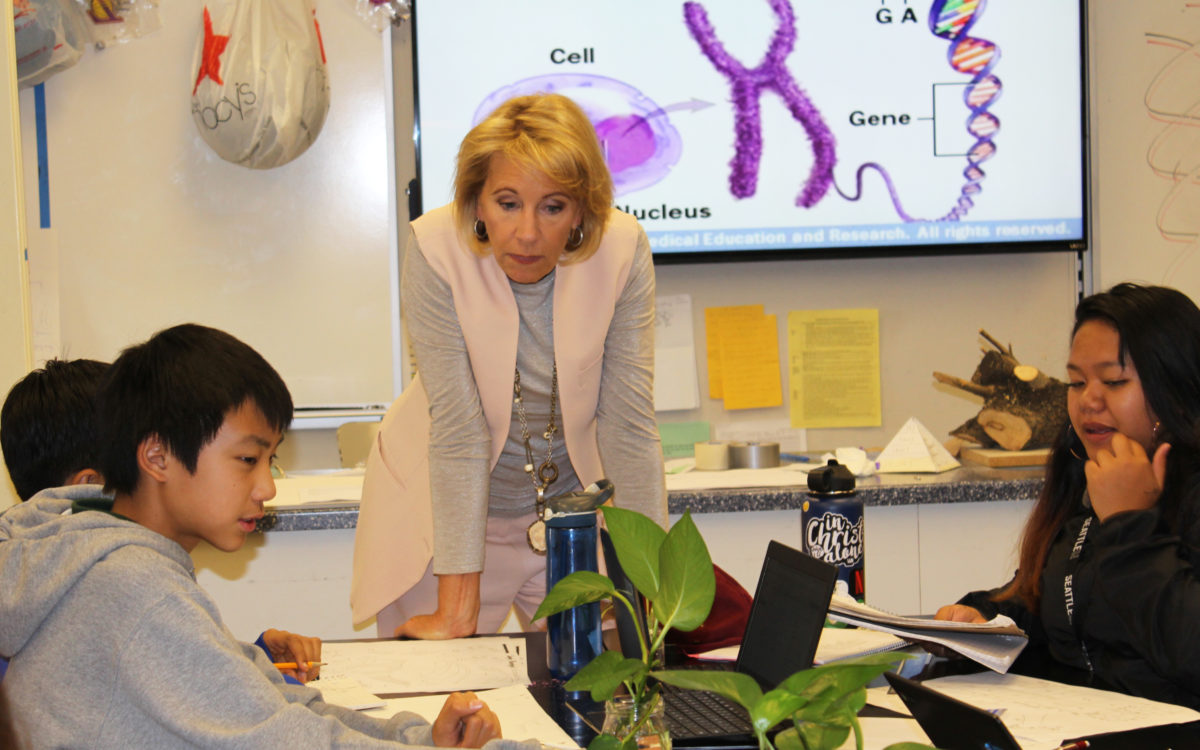 MILPITAS – In her first visit to the San Francisco Bay Area as U.S. Secretary of Education, Betsy DeVos toured Thomas Russell Middle School on Thursday to find out about its “personalized learning” program.

DeVos visited a public high school in Oregon on Wednesday and continues to be interested in finding out how schools are serving individual students well, especially in “unique and new and interesting” ways, said Elizabeth Hill, DeVos’ press secretary.

She said the Education Secretary wants to promote innovation in all schools, without placing an emphasis on which type of school it is – public, charter or private. Russell is a public school operated by the Milpitas Unified School District.

The school, Hill said, is “known for its individualized learning model.” She added that DeVos was “in a mode to learn,” after she launched a “Rethink School Tour” last month.

But press was kept at a distance from the controversial federal official during most of her visit, so although she told reporters at the end of her tour that she “learned a lot,” it was unclear specifically what was unique about what she saw.

“I got to see creative approaches toward empowering students to take control of their learning,” she said.

Milpitas Unified Superintendent Cheryl Jordan said in a follow-up phone interview on Friday that DeVos saw personalized learning happening in a social studies class, where some students were working on collaborative projects, some were working independently and some were meeting with the teacher one-on-one to talk about their goals. The school uses the personalized learning online “platform” developed by the Summit Public Schools charter system, she said.

“Brian Greenberg asked us if we would be willing to have Betsy DeVos come and visit and of course, we said, ‘yes,’ because it’s a great opportunity for her to see the great work that public school educators do in meeting the needs of our kids,” Jordan said. “That was his thought too – to see how a traditional public school is really innovating. It isn’t just about a personalized learning platform, but it’s really about engaging our learners and giving them unique experiences that are going to impact their learning for the long run.”

In a science class, reporters were instructed to stay in the back of the room, where it was difficult to hear the conversation between DeVos and students. She sat with some who were learning about genetic traits passed down through generations by working in groups on drawings of dragons.

When DeVos asked students about their dragons’ traits, one boy said his breathed fire. He also said he thought it was supposed to male, but he wasn’t sure. Reporters were told to leave the room before DeVos was finished visiting the science class.

Other reporters watched DeVos work on a portrait in an art class. But the press was not allowed to follow along on DeVos’ tour or hear what administrators told her about their educational program.

When asked why she chose to visit this particular campus on a West Coast tour that would wrap up with a trip to Seattle on Friday, DeVos said “it was highly recommended.”

After the tour, DeVos met privately with school and district officials. Paul Cao, a Milpitas High Advanced Placement Government teacher, told reporters before the meeting that he planned to participate in the discussion and hear what DeVos had to say, even though some of his colleagues had suggested that he should boycott the session, due to her controversial stances on education issues.

“I think you need to have a seat at the table in order to effect change,” Cao said, adding that he considered DeVos’ visit an opportunity for constructive dialogue.

Since her appointment, DeVos has sparked controversies by promoting school choice, including vouchers that could be used to send students to religious or charter schools. She has also drawn criticism from California Attorney General Xavier Becerra for rolling back campus sexual assault protections under Title IX, as well as protections for student loan borrowers.

During a brief press conference at the middle school, DeVos defended her Title IX decision, saying she is gathering input before deciding how to move forward on the policy.

Outside the school, about two dozen protesters held signs such as “Protect our schools,” “Shame on you, Betsy,” “Take back education,” “DeVos 4 Profit, Not People,” and “Invest in our Nation, Fund our Education.” About half were from DeAnza Community College in Cupertino, while others included a sexual assault victim angry with DeVos’ decision to roll back Title IX protections and some senior citizen activists concerned about her promotion of school choice.

Some students leaving school were surprised to see protesters and to find out that DeVos had visited their campus.

Gilbert Arregun, 13, said students were only told that “somebody important” was visiting.