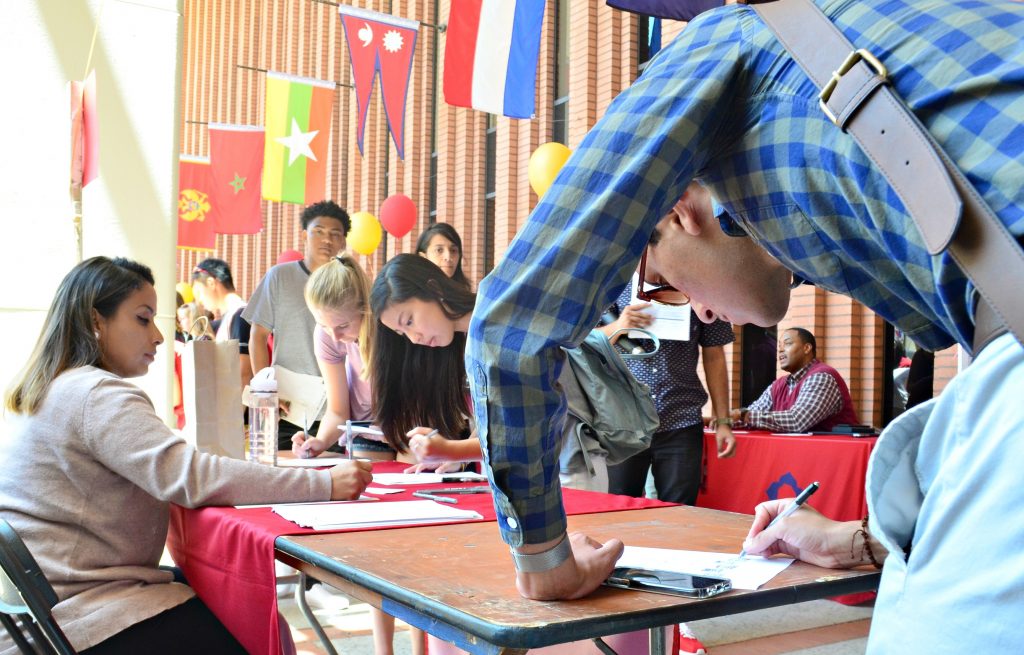 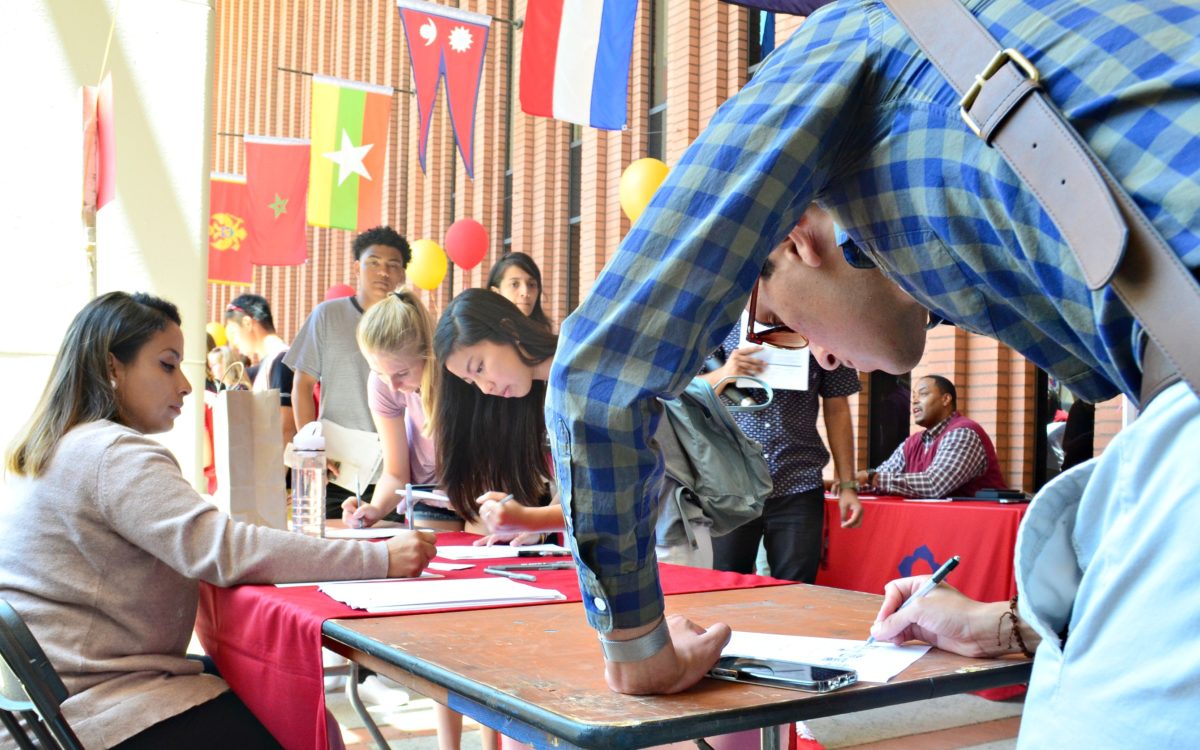 Her work-study position at the college website and communications office allows her to earn up to $2,000 a year and pick up Internet skills, all with flexible hours so she can study for exams and complete class projects. In contrast, she recently quit a local pizza restaurant job because scheduling was rigid and her grades suffered. “It took a lot of time away from my school things,” said the English major from Chicago.

So she is delighted to hold down the 15-hour-a-week campus job that pays $10.50 an hour and helps her afford books, transportation, telephone and other costs that her hefty scholarship grants and loans don’t cover. But she is worried that the 2017-18 budget put forward by President Trump in March would sharply cut back the federally subsidized work-study program nationwide and could mean hundreds of thousands of students like her will have to delay buying textbooks or reduce college enrollment to part-time.

While remembered fondly by past generations of former college cafeteria workers and campus tour guides, the $990 million-a-year program now faces much scrutiny and an uncertain future. The Trump administration’s proposal to cut funding by about half has triggered strong debate and supporters of work-study are using that attention to call for curtailing advantages private colleges enjoy in garnering the aid.

California last year received about $107 million in federal work-study money, and U.S. Department of Education data show that California’s private nonprofit four-year colleges like Occidental, Stanford and USC received about a third of that: $34.2 million. That was more than the $32.8 million all the four-year public schools in the state received — even though University of California and California State University schools enroll hundreds of thousands of more students, many of whom are low-income.

Nationwide, private schools receive about 45 percent of federal work-study funds, despite enrolling less than a quarter of undergraduates, according to an analysis by education and business groups seeking to reform the program.

Usually from low- and moderate-income families, work-study students typically are employed between 10 and 20 hours a week, earning up to $3,000 a year. (The colleges often provide 25 percent of the wages and the federal government 75 percent.)

The work-study jobs — in campus libraries, dorms, gyms and offices and sometimes an off-campus nonprofit — are usually an important part of financial aid packages that include various grants and loans.

The Trump administration’s proposal, which calls the program “poorly targeted” and seeks to halve it, is just one part of its overall efforts to significantly slash education spending.  That plan has been met with immense dissent from educators and even Congressional Republicans; some conservatives otherwise skeptical of college aid spending point out that the 634,000 students in the program nationwide earn the assistance rather than receive outright grants and that the students may gain experience for entering the workforce after college.

Meanwhile, criticism is mounting from within and outside academia about how out-of-date formulas for work-study funding favor private schools, particularly those in the Northeast, compared to public colleges nationwide and privates in the West.

While work-study remains popular, it “is vulnerable because it is so easy to criticize how the dollars are distributed,” said Mary Alice McCarthy, director of the Center on Education and Skills at the New America think tank. She described it as “a good program that just needs some reforms because over time it has gotten so out of whack.” Now is a good time for changes, especially while Trump’s proposed cuts are being debated, she said.

Her group and others advocate changes that would link work-study funding to the number of students at each college who receive Pell grants — usually from families earning less than $50,000 a year — and also to the  college’s graduation rates of Pell students. Joining that campaign are such diverse organizations as the U.S. Chamber of Commerce and the Young Invincibles, a group that advocates for students and young adults.

Critics emphasize that the funding formula, begun in the 1960s, favors schools with high tuition and, as a result, more student need for financial aid.  Colleges that joined the program early on, disproportionately in the Northeast, also receive a leg up because their funding base is grandfathered in for them at the expense of others, analysts say. When the program began, UCs and CSUs were practically tuition-free and did not receive much work-study money; so they remain at a disadvantage because their shares have not risen enough to reflect more recent increases in tuition and enrollment. Wealthier schools have another advantage in their ability to pay the matching funds.

“Work study funds could be more effective if they were given out in a more rational manner based on students’ actual financial need. But the money is better than nothing,” said Robert Kelchen, a professor of higher education policy at Seton Hall University in New Jersey.

The verdict is still out on whether those dollars would help low-income students more if the money were rolled into grants focusing directly on students’ financial needs, Kelchen said.

Even among public universities, the more expensive ones tend to have more students collecting work-study dollars. At the UC system’s 10 campuses, more than 12,600 were employed through the federal work-study program in 2015-16, federal education data show.  The lower-cost 23 Cal State campuses had just 7,311 work-study students, despite the system’s enrolling nearly twice as many students as UC and a higher percentage who are low-income

The University of Southern California, a private university in Los Angeles, employed the most number of students in the state in the work-study program — 3,020 in 2015-16. Thirteen miles south on the 110 Freeway, Cal State Dominguez Hills — where tuition is much lower — employed just 196 students on federal work-study in 2016.

Thomas McWhorter, USC’s dean of financial aid, acknowledged that schools like his have an advantage in the formula and that the methodology is being debated nationwide. But he said he did not want to pit his school and other private institutions against any other higher education sector. “I’m going to tell you that I appreciate the funding support USC has from the federal government,” he said.

At a recent work-study job fair at USC, about 1,200 students turned out to apply for specific positions after most were told in general that they were eligible for the federal subsidy. Sophomore Etienne Green stood behind a table and recruited students to fill openings for cultural relations and university events, a campus division where he works. The work-study job supplements his federal and campus grants and has other benefits: some really cool assignments, such as when he drove Will Ferrell across campus in a golf cart so the actor and alumnus could deliver a graduation speech last spring.

While the job has little direct connection to his civil engineering major, Green said it trains him “to talk to people and be in this work environment where I meet people of high placement. It allows me to be more informed about what it’s like to be in the workforce. In that way it helps out in my career.”

That networking connects students more firmly to their schools and, as a result, encourages them to work harder academically, according to administrators at both public and private campuses. By interacting with faculty and administrators at work, “it engages them on campus and helps with student retention. It helps them come back and stay in school”, said Anita Kermes, Sacramento State’s director of financial aid.  The school employs about 450 through the federal program and their paychecks “could mean the difference of a student coming to school or not coming to school,” she said. Without the forgiving work-study schedules, she said more students might decide to attend part-time to accommodate more rigidly scheduled off-campus jobs.

Similarly, Kieron Miller, Whittier College’s vice president of enrollment, said that federal work-study is very important to the 175 students who receive it there. “It’s a way to get work experience and a way for the students to get connected to the schools. It’s more valuable than just the means to make money,” he said

So they and many other college administrators across the state and nation oppose the Trump administration proposal to reduce funding by 50 percent.

While worrisome to schools, the proposal has not won a lot of Congressional support. U.S. Senator Roy Blunt, R-MO, who chairs the Senate subcommittee on education appropriations, said during a June hearing that such cuts make the Trump plan “a difficult budget request to defend.”

EdSource’s requests to discuss work-study funding with officials in the U.S. Department of Education went unanswered.